Francesca Dixon, 65, is on of the new residents of Lavender Courtyard, a first-of-its-kind affordable housing complex aimed at LGBTQ seniors in Sacramento.

When Francesca Dixon came out as transgender in late 2019, it was a matter of life and death. Tired of the toll that staying in the closet had taken on her mental health for more than 60 years, she decided to begin living life as the gender she had envisioned herself in since childhood.

What followed, however, was a turbulent divorce from her wife of 35 years, estrangement from her three children and the loss of her home in Elk Grove.

“I kind of don’t have a life right now,” she said earlier this year. Dixon found herself living off of Social Security income and continuously searching for rooms to rent across Sacramento County.

After two years of housing instability, Dixon was poised to become one of the first tenants at Lavender Courtyard. The site is the first-of-its-kind affordable housing complex aimed at LGBTQ seniors in Sacramento, and one of less than a dozen such places in California, advocates say. 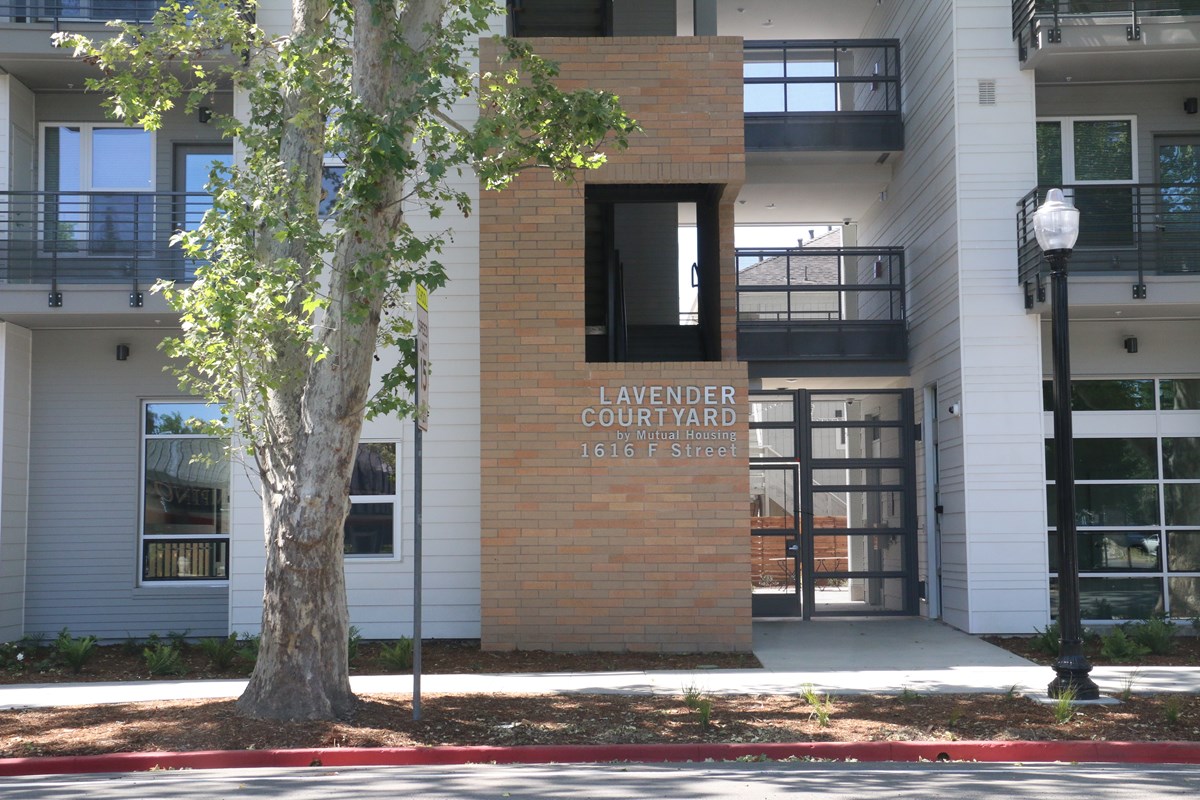 Lavender Courtyard, a first-of-its-kind affordable housing complex aimed at LGBTQ seniors in Sacramento, is located at 1616 F St. in the Boulevard Park neighborhood.Courtesy of Felicia Alvarez

Dixon, now 65, is one of more than 100 LGBTQ seniors who applied for a spot in one of the 28 units at Lavender Courtyard, a three-story building constructed earlier this year at F and 16th streets. The site’s first tenants arrived in May and leasing occurred throughout the summer.

Like Dixon, many residents are hoping not just for an affordable place to live, but a safe and affirming place to call home.

Those challenges are felt “in a more acute fashion” by the LGBTQ community, said Tim Johnston, a senior education adviser at Services and Advocacy for GLBT Elders, or SAGE, a nonprofit that advocates across the country for LGBTQ seniors. Queer seniors are twice as likely to live alone, according to SAGE, and four times less likely to have children.

“Access to safe and affordable housing is difficult for a lot of people — not just LGBTQ folks — but a lot of LGBTQ folks have made less money over the course of their lives due to wage discrimination or not inheriting money from their families,” Johnston said.

Lavender Courtyard has been marketed to the LGBTQ community, through brochures and advertisements. More than 600 people asked to be emailed more information about the building. During the 16-day application period in January, 121 had applied, prompting Mutual Housing California, the nonprofit that owns and operates the complex, to use a lottery to choose tenants.

Under anti-discrimination and fair housing laws, Mutual Housing can’t exclude people who are not LGBTQ. During the move-in process, the nonprofit’s staff asked residents whether they would benefit from “LGBTQ community resources” as a way to create an inclusive housing community, said Steven Root, Mutual Housing’s communications director.

“We had to be very careful about our marketing and our wording to make sure, as best as possible, that those who were interested made it into the lottery,” Root said.

By 2030, about 71 million people will be over age 65, and SAGE estimates that about 7 million of those seniors will be part of the LGBTQ community, which already has a higher rate of poverty and homelessness. Affordable housing is among the group’s top priorities, and SAGE says that only 13 states and Washington, D.C., have LGBTQ-friendly housing where residents can live openly without concern about discrimination.

In a 2021 survey, AARP found that 8 in 10 LGBTQ adults were concerned about being discriminated against because of their sexual orientation. For transgender and nonbinary respondents, the rate jumped to 9 in 10. The survey also found about two-thirds of LGBTQ adults over age 45 were very or extremely concerned about having enough money for retirement.

Mutual Housing has been providing affordable housing to lower-income residents for more than 30 years. The company owns and operates more than 1,000 homes, mostly in the Sacramento area, including Glen Ellen Apartments where some residents claimed Mutual Housing’s property manager was harassing them with petty citations.

At its newly built 53-unit Lavender Courtyard, 28 units are designated for seniors earning 35% to 40% of the area median income, or about $23,940 to $25,400 for a single person. The remainder has been earmarked for homeless individuals. Most of Lavender Courtyard’s apartments are one-bedroom units that will rent for $340 to $680 per month, according to marketing information.

The search for a welcoming place to call home

For Dixon, who has spent most of her adult life in Sacramento, financial instability landed her twice in living situations that were within her budget but not hospitable, forcing her to stay “in the closet” around other tenants.

In one, she had roommates who would fling insults at the LGBTQ community and were especially hostile toward the transgender community.

“I came out of my room wearing fuzzy slippers once and I was like, ‘Oh gosh, oh gosh. Please don’t notice,’” she recalled. “I got lucky, nothing happened to me.”

Several months later, Dixon found a place to rent through her social network at the Sacramento LGBT Community Center. While the cost of the room fit within her budget, the house had rules that Dixon found  difficult to live under: limits on laundry usage, a ban on guests and a no-alcohol policy.

“I need more freedom than this,” Dixon said at the time.

Marcy Basila, a community resource coordinator at the Sacramento LGBT Community Center, says she sees LGBTQ people struggling to find housing in the Sacramento area on a daily basis..

“Although there’s a lot of housing programs in the area and they’re affirming to a degree, we all know that that’s not always the case,” Basila said.

Her clients often ask to live in places that are welcoming to the LGBTQ community, especially if they’ve become “shunned” by their families. Basila said she has a number of clients who, like Dixon, came out later in life. “That’s a running theme,” she said.

In March, after years of instability, Dixon received a glimmer of hope with a notice that she was the fifth prospective tenant chosen for a unit at Lavender Courtyard. She spent the next four months filling out forms, meeting Mutual Housing’s staff to go over her financial information and trying to not get her hopes too high.

In the first week of July, Dixon secured a one-bedroom unit at Lavender Courtyard. After the months of waiting, finally a slice of freedom had arrived, she said.

The walls of her new apartment were bare, and the place was still sparsely furnished. But within a week of moving in she had a full pot of bacon lentil soup on the kitchen stove. The recipe was a holiday-time tradition from childhood.

Felicia Alvarez is a writer with the Investigative Reporting Program at the University of California, Berkeley, Graduate School of Journalism. The IRP reported on this story through a grant from The SCAN Foundation.