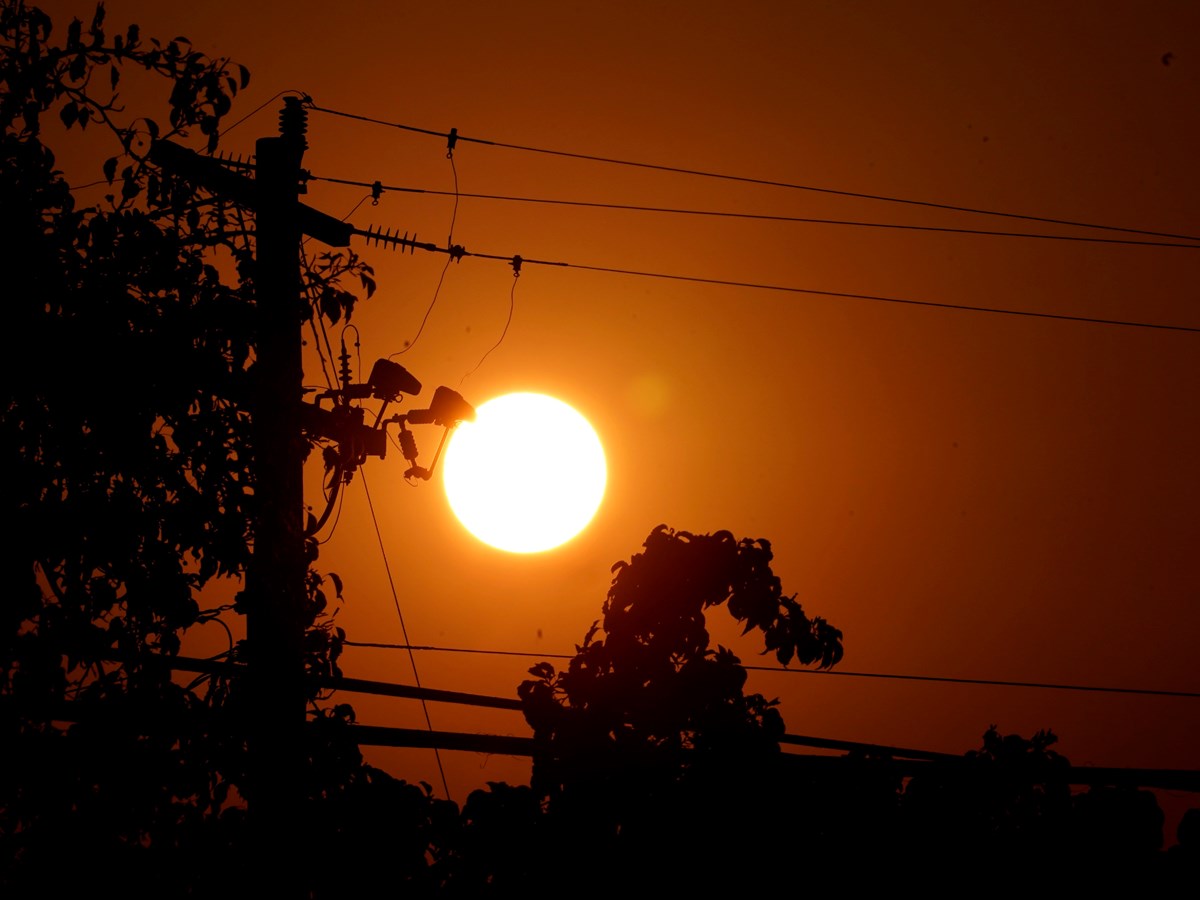 A red sky sunrise is seen between power lines in Sacramento, Calif., Thursday, Sept. 8, 2022. Temperatures in the Sacramento area are expected to go over the 100 degree mark and that could put a strain on the power supply.

California is experiencing an extended, record-breaking heat wave, which is causing a strain on the state’s energy grid. The state’s grid operator, California ISO, has warned of the potential for widespread blackouts since Monday if energy supply can’t keep up with demand.

Cal ISO has issued ten consecutive Flex Alerts since the beginning of the heat wave, urging Californians to conserve energy between the hours of 4 p.m. and 9 p.m., when demand on the grid is highest.

Temperatures in the Sacramento valley area are forecast to remain above 100 degrees through the end of the week, triggering the National Weather Service to issue an excessive heat warning for much of the state through 8 p.m. Friday.

⚠️Hot temperatures are forecast to continue for the next several days. Continue to practice heat safety. Relief arrives over the weekend. #CAwx pic.twitter.com/9bBFg8cMXz

So what does it mean when Cal ISO orders these emergency alerts, and what can you do to prepare yourself if one has been issued? Here's how to stay informed and prepare when heat impacts power in California.

What does heat have to do with the state’s energy grid?

During a heat wave, more people are likely to turn on their air conditioning, which Cal ISO says drives up demand for electricity.

The hottest portion of the day, late afternoon through the early evening, is also when many people are at home cooking dinner on the stove, running the dishwasher and using other major appliances like laundry machines.

Renewable energy sources are less available during these times as well — solar power generation slows when the sun begins to set, which tends to be around 4 p.m., according to Cal ISO.

When consumers across the state drive up demand — by using air conditioning and major appliances — and overall energy supply starts to decrease, the state’s power grid may become stressed.

What are Cal ISO’s emergency alerts, and when are they called?

Flex Alert: Flex Alerts are requests for Californians to voluntarily conserve electricity and are called when Cal ISO forecasts high energy demand statewide. These alerts can be issued during any time of day, but are often called between 4 p.m. and 9 p.m., when demand is highest.

Cal ISO said reducing energy during Flex Alerts can prevent the need for the organization to move into higher tiers of emergency.

Restricted Maintenance Operations: This action restricts the agency’s energy-generating partners from taking their generators offline for routine maintenance, which Cal ISO says allows it to maximize the amount of energy in its reserves.

This move also allows Cal ISO to ensure that all generators and transmission lines on the grid are available for use in the event of a power emergency.

Transmission Emergency: Transmission emergencies are declared when important grid equipment, like power generators and energy lines, malfunction and need to be taken offline for maintenance.

A Transmission Emergency was issued for Northern California on both Tuesday and Wednesday after a generator overloaded in Butte County, according to Cal ISO.

EEA Watch: This alert is issued when Cal ISO expects energy supply to exceed demand. This alert can come in the days leading up to a potential power shortfall event.

Energy Emergency Alert 1 (EEA1): This alert is issued when all available power is being used across the grid. Consumers are often encouraged to start saving energy during this alert.

Energy Emergency Alert 2 (EEA2): A level above the first energy emergency, when an EEA2 is issued Cal ISO is able to request extra energy from power generation companies along with other states.

Energy Emergency Alert 3 (EEA 3): The EEA3 is the most urgent of the alerts and is triggered when statewide energy supply does not meet demand. When an EEA3 is issued, Cal ISO is able to order rotating power outages to ease stress on the grid. However, this is not always required — on Tuesday Cal ISO issued an EEA3 and narrowly avoided rolling blackouts.

What are rolling blackouts?

When power demand exceeds available supply, energy companies can plan a series of short outages spread across their service area to reduce the chances of a longer-lasting, widespread grid shutdown.

“Planned outages help stretch available energy when supplies are short, and ensure the grid doesn’t collapse into uncontrolled and unplanned power failures, while limiting outages to the smallest group of customers in a more contained area for shorter periods of time,” Cal ISO officials said.

While the state generates a large amount of its own energy, it also gets extra energy from neighboring states like Oregon and Nevada, especially when demand ramps up. Transmission lines, both above and below ground, help states exchange energy.

Cal ISO officials say that rolling blackouts can help protect the reliability of both California and nearby states’ power grids.

This kind of rolling blackout is relatively infrequent — the last time California saw rotating outages was during an intense heatwave in 2020. Before that, the state hadn’t seen Cal ISO-issued blackouts since 2001.

PG&E often issues its own shutoffs, known as Public Safety Power Shutoffs, which are different from Cal ISO’s rolling outages. The utility issues these shutoffs in order to prevent its own equipment from sparking wildfires during dangerous fire weather, usually a combination of dry and windy conditions.

How can I prepare for a potential blackout?

Find out if and how you’ll be impacted: Cal ISO tracks grid supply and demand in real time on its website. The agency also has an app, called ISO Today, which sends push notifications to your mobile device when alerts are issued.

Participate in Flex Alerts:Here’s what Cal ISO officials say to do to help conserve energy during high-demand periods

Preparing your home: If you know when outages are expected to hit, Red Cross officials say charge your phone, computer and any medical devices ahead of time.

Cal ISO officials say to pre-cool your living space by lowering the thermostat early in the day and adjust blinds and drapes to cover your windows.

If you don’t have access to air conditioning, the Centers for Disease Control and Prevention recommends heading to a movie theater, mall, community space or cooling center to help your body recover from high temperatures.

Have an emergency kit prepared, just in case: Red Cross officials say to have enough extra food and water stocked to last two weeks. They also recommend keeping extra ice and coolers on hand, which can help extend food refrigeration in the event of an extended outage.