How wildfires are transforming California’s most iconic landscapes

On a warm July day in Yosemite National Park, a group of researchers gathered at the foot of a giant sequoia tree.

The sky was, thankfully, clear. The same was not true for the southern tip of the park, where smoke from the nearby Oak Fire still hung heavily over the forest and residences. But this far north, near the Merced Grove trailhead, these researchers got lucky.

“We’ve been really fortunate,” said Breezy Jackson, a fire ecologist and director of UC Merced’s Yosemite and Sequoia field stations. “We don’t know until we get here if the air quality is going to be good enough to work.”

Jackson has lived in Yosemite for the last 12 years, currently residing in a small community inside the park called Wawona. As part of her job, she assists visiting researchers with their work — like she did that day.

But her work and personal life were recently upended. Just a few weeks earlier, she evacuated her home because of the Washburn Fire. It’s the fifth evacuation order she’s gotten in the last decade. While she’s since returned home, she says it’s hard to feel like life is back to normal when yet another fire burns close by.

“We're just having exponential changes in the way fire behaves in California and throughout the western United States,” Jackson said. “And I don't see that slowing down in my lifetime.”

All over California, wildfires have ravaged homes, communities and iconic landscapes in the state. Places that once seemed so permanent are disappearing from sight — and researchers are having to rethink how best to protect them.

By now, Jackson says she knows the drill. Her first evacuation was in 2013, during the Rim Fire. Since then, like many other seasoned evacuees, she’s become an expert in the art of leaving quickly. She created a list years ago of her most important belongings, so she knows what to bring with her when she’s forced to leave.

Life in and around Yosemite wasn’t always like this. Jackson grew up in Bass Lake, an area only a few miles away from the park. And all her life, she was familiar with fire. Her dad was a firefighter. She’s worked as a firefighter herself, too, and as a fire lookout. Fire wasn’t something that necessarily scared her.

But in recent years, she’s questioned her instincts. Wildfires have burned through forest land in ways she never could have expected.

“What we're seeing now is so far outside my frame of reference and my understanding that I don't trust my own judgment and intuition,” she says. 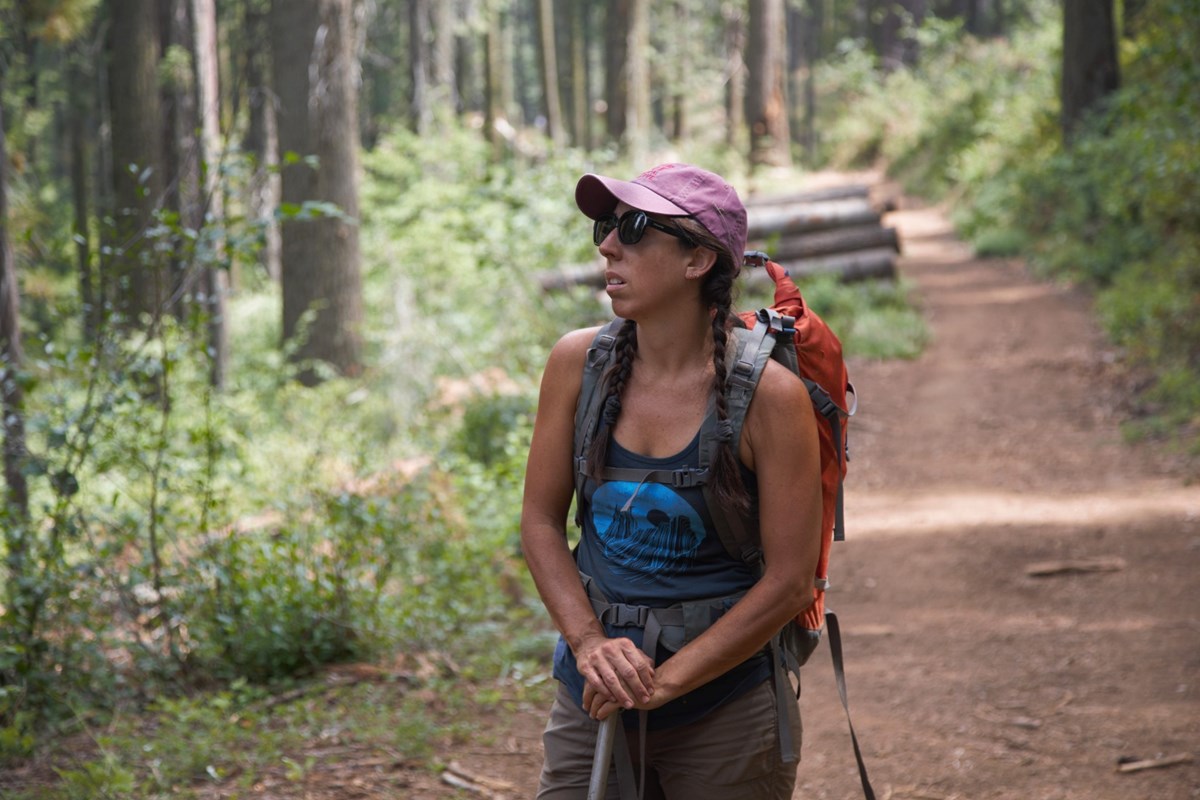 Fire or not, Jackson’s work continues. She and the other researchers had set out that July day as part of an ongoing project to learn more about where giant sequoias are sourcing the water they need to survive, and how prescribed burning might impact that. These trees drink up about 1,000 gallons every day — the same amount as 20 filled bathtubs.

“Giant sequoias are kind of an indicator of locations where there is abundant reliable water,” said Wendy Baxter, a forest canopy ecologist with the Marmot Society. “They wouldn’t be here if there wasn’t.” 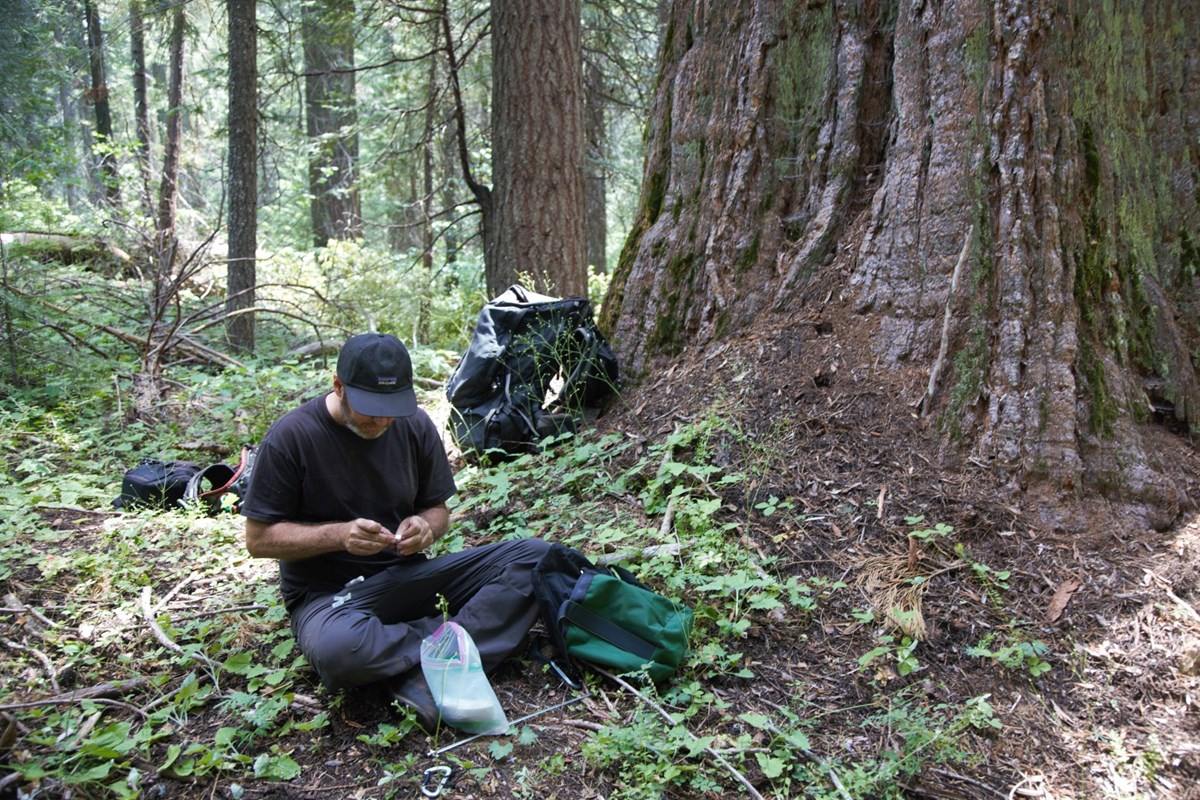 Anthony Ambrose is a researcher with the Marmot Society. On July 28, 2022, he and other researchers studied giant sequoias along the Merced Grove Trail in Yosemite National Park.Manola Secaira / CapRadio

For a long time, researchers like Baxter used to think of these trees as nearly indestructible. They can live for thousands of years and are resilient, often able to survive both drought and bug infestation.

But in a few short years, the foundation of that belief has been rocked by frequent and devastating wildfires. In the span of just two years, thousands of giant sequoias have died.

This sudden shift transformed the way that Baxter and her research partner, Anthony Ambrose, approached their work. Ambrose said that it prevented some of it from even happening — like last year, when they were supposed to take samples from trees in Giant Forest in Sequoia National Park, to the south. The KNP Complex fire unraveled those plans.

“The fires have really become a really significant issue for us,” Ambrose said.

The approach to their research has changed, too.

“We had been thinking, ‘Oh, maybe drought is something we really need to be focusing on’,” Baxter said. “But fire has become even more of a concern for the giant sequoias and their ability to survive.”

The roots of the park system

Many researchers are similarly reevaluating their understanding of their work. Garrett Dickman, a forest ecologist for Yosemite National Park, has spent the last few years responding to wildfires.

When he started his career, he had planned to study how changes in the landscape affect biodiversity. Nowadays, it’s all about fire.

“It is almost impossible for me to imagine my job without heavily paying attention to fire,” he said.

Dickman is often on site during a fire and is there to see its aftermath. He said it still shocks him, seeing thousands of giant sequoias killed in one fell swoop.

“You just see thousands of years tick away on your fingertips and they're gone,” he said. “They're not going to be replaced in our lifetime or our children's lifetime or the lifetime after that.” 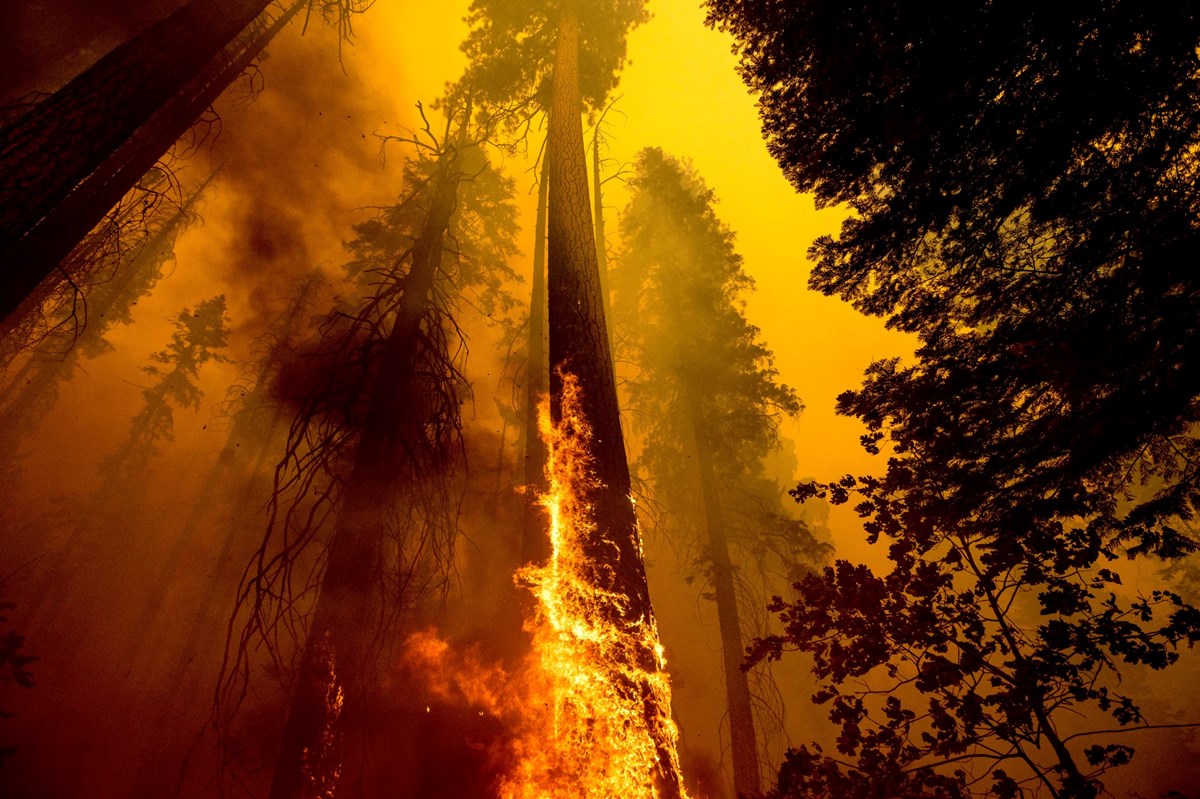 In this Sunday, Sept. 19, 2021 file photo, Flames burn up a tree as part of the Windy Fire in the Trail of 100 Giants grove in Sequoia National Forest, Calif.AP Photo/Noah Berger

At the time, logging was one of the biggest killers of these trees. But white conservationists at the time, like Teddy Roosevelt and John Muir, were famously fascinated by them. That fascination boosted the trees’ profile and in 1864, President Abraham Lincoln signed a bill that set aside protections for Yosemite Valley and the Mariposa Grove of Giant Sequoias, an area within what is now Yosemite National Park.

This created the groundwork for a later decision to designate the area as a national park. With that status came protection against free-range logging and a general “hands-off” approach to managing the area.

“That is why Yosemite is a national park,” Dickman said. “The idea of the National Park Service is rooted in these trees.” 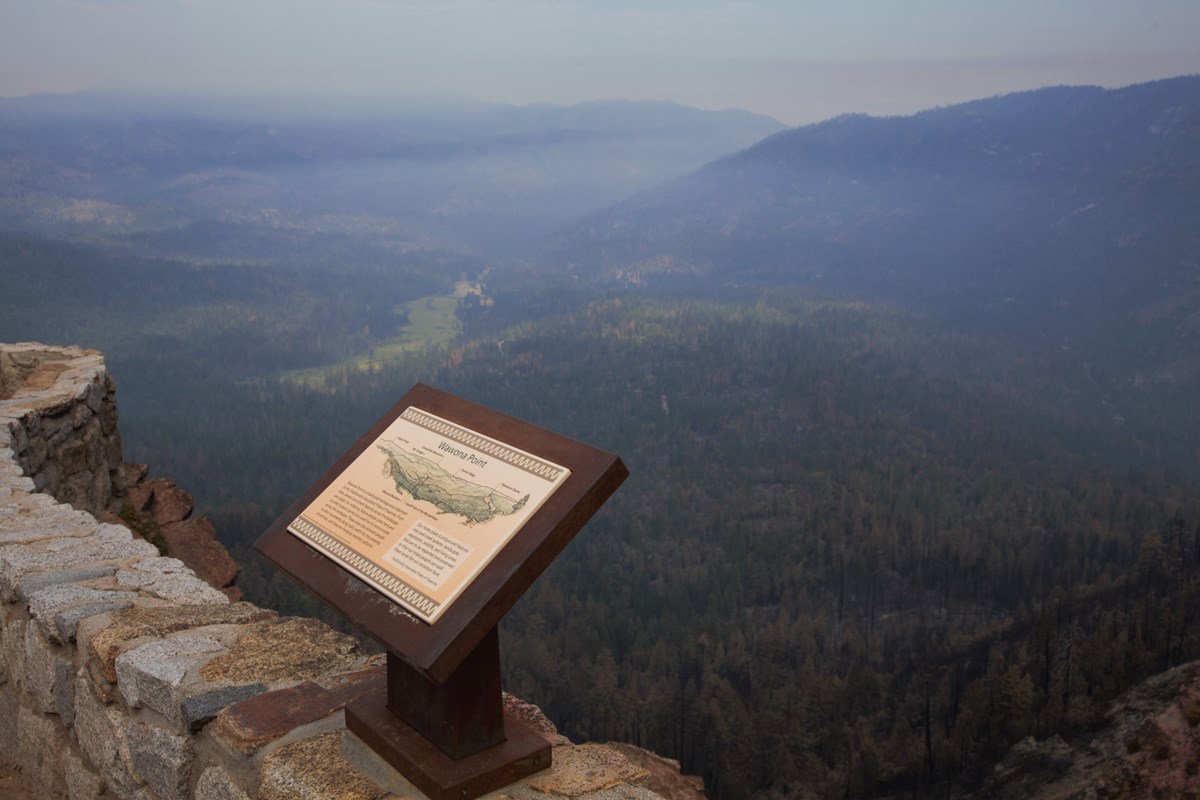 On July 28, 2022, smoke from the nearby Oak Fire was visible throughout Yosemite National Park, as seen from Wawona Point.Manola Secaira / CapRadio

The primary threat to these trees has since shifted from logging or even drought to wildfires. To be clear: It’s not that wildfires have never killed giant sequoias before. Dickman said that about 200 of the trees died in high-severity fires in the last 2,000 years.

But as many researchers have noted, that number has recently skyrocketed. Estimates say that thousands of giant sequoias burned in 2020 during the KNP Complex and Windy fires, and possibly over 10,000 of them in 2020’s Castle Fire.

Dickman said that this loss is just one reason why these fires are called catastrophic.

Joined at the hip

Every year that he does this work, Dickman said, the reality of climate change becomes more and more real to him. It’s impossible to escape. He said that his niece and nephew, who live in New Mexico, had to evacuate their home due to a fire this year, and they’re still having nightmares about it.

“That’s nothing that I ever had when I was a kid,” he said.

In recent years, Dickman said that the National Parks Service has further departed from that traditional hands-off approach to managing the parks. He said their recent forest thinning efforts in Yosemite is one example, as well as their plans for reforestation in Sequoia National Park.

Moving forward, he said that active management efforts like this could help save giant sequoias, and forests as a whole, along with the homes of people who live beside them.

“We and the sequoias are joined at the hip in this,” he said. 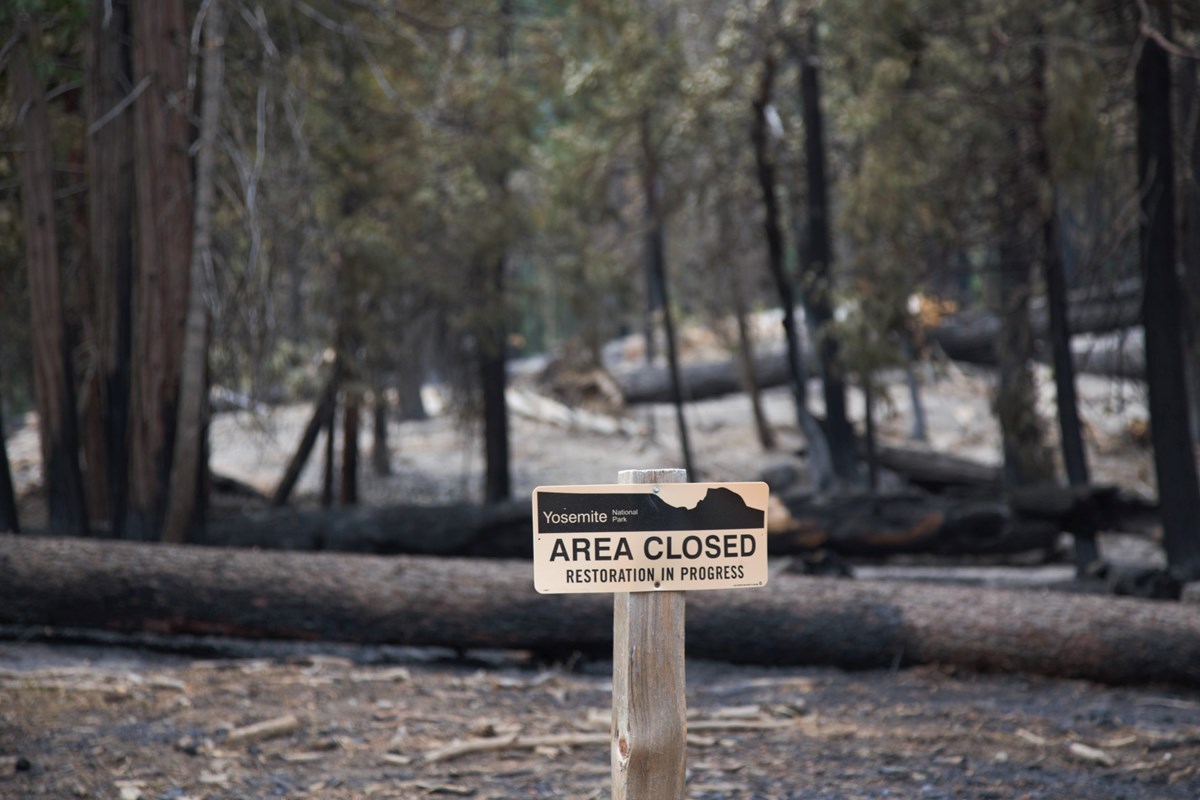 Restoration efforts in the Mariposa Grove of Giant Sequoias, which is located within Yosemite, have been ongoing for years. Pictured above is an area that was marked for restoration and was also impacted by the Washburn Fire.Manola Secaira / CapRadio

The change is also reflected in the new “R.A.D.” framework that the NPS has created for its employees: Resist. Accept. Direct.

Dickman said that, basically, resist refers to preservation — resisting change, keeping the park as it is. Accept means acknowledging that there will be change to the parks that can’t be controlled — like when a massive wildfire blazes through.

And direct means taking control of change when possible, and guiding new forest growth. After all, Indigenous people intentionally burned forest land and manipulated it in other ways to keep it healthy long before white settlers arrived.

“We really need to take a hard, hard look at what we're doing or not doing,” he said. “You know, is taking action the same thing as taking inaction?”

Back in Wawona, Jackson said that she’s also finding her own ways to reframe her work and life. She said she knows that peak wildfire season probably won’t get much better in her lifetime. 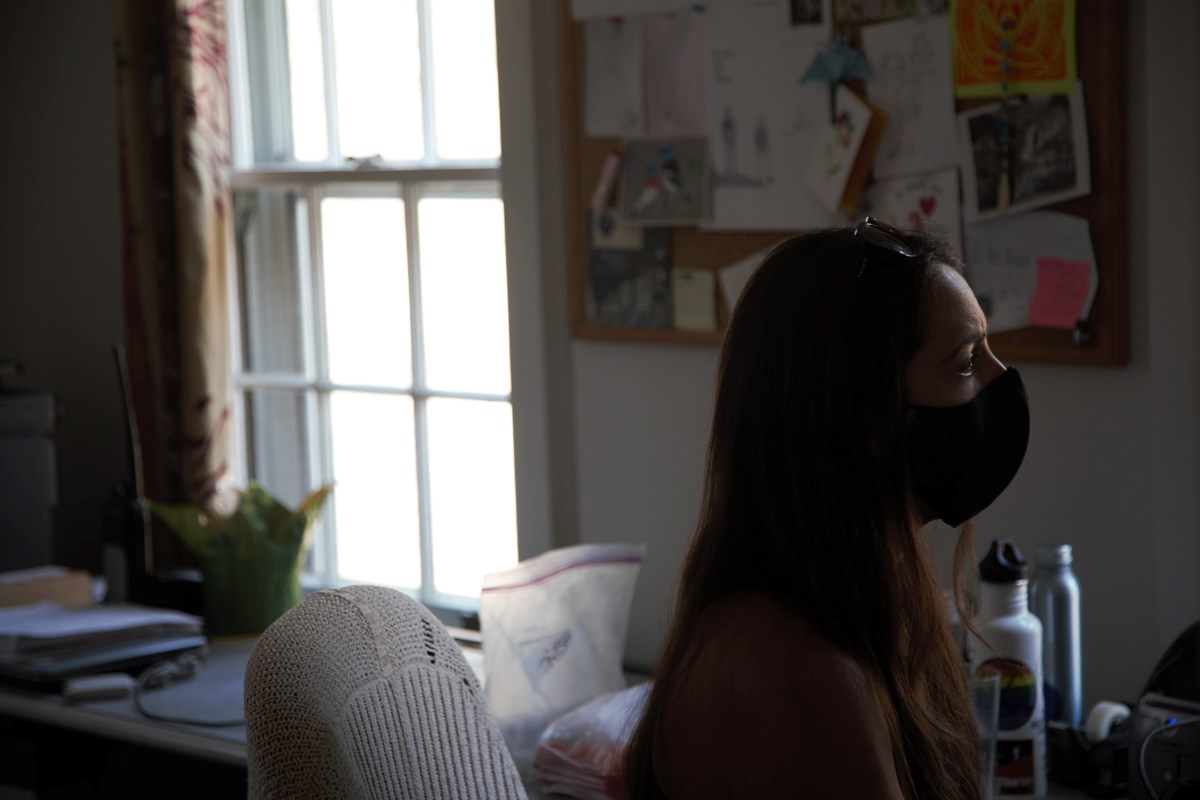 So, she’s started to consider summer in Yosemite as a kind of winter — a time when people stay indoors, take shelter from extreme heat and smoke, and recuperate. It’s a much different reality than she would have pictured as a child, but she said it’s important to look for the positive, too.

“When I walk in the forest, I smell the bear clover, which has this very pungent, unique fragrance … I just feel so at home,” she said. “At this point, it feels like it would be almost impossible to leave because of that intense desire to be here and protect my home.”

Even if life becomes more difficult in Wawona, Jackson said that she’s not going anywhere. There’s much more work to be done.