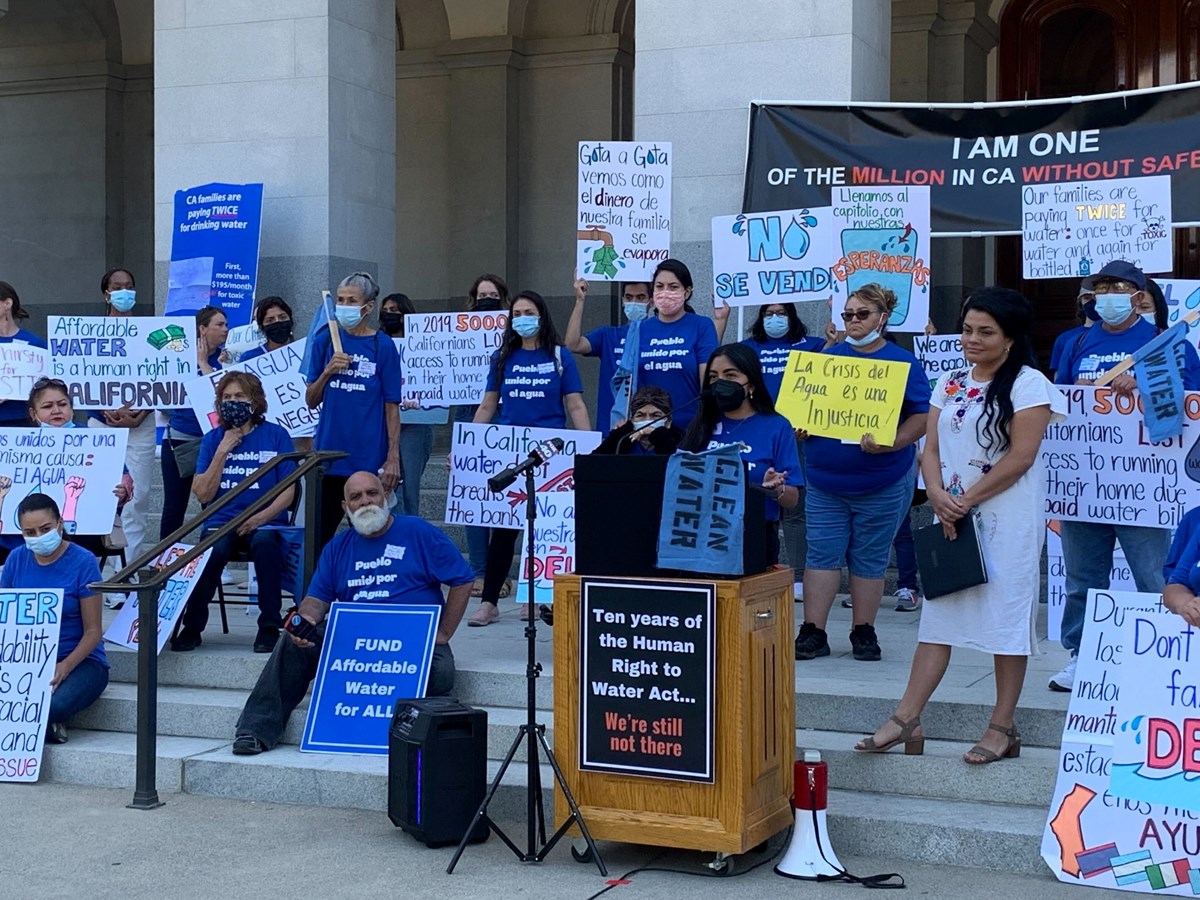 Rosa Espinoza, an activist who works in Lenare, hopes lawmakers will pass legislation aimed at keep contaminants out of drinking water.

Zenaida Montes calls the water at home “pure sickness.” Like many others who live in Fresno, she can’t drink it and regularly pays for bottled water instead.

“All the water in Fresno, it’s really bad,” Montes said in Spanish. “[I have to] buy gallons of water to make food, for everything.”

It’s so contaminated, she says, that it even leaves her clothes feeling dirty after a wash.

Montes was one of the few dozen people who arrived in Sacramento on Thursday morning, rallying at the Capitol building to demand that lawmakers take action to ensure better access to clean water for all Californians.

Their demands varied, focused at times on passing particular pieces of legislation and devoting more of the state budget to water accessibility.

A decade ago, the state officially recognized a human right to clean, safe and affordable water for all Californians. Even so, many communities are continuously plagued by dirty water. A letter from the state auditor published in July reported that nearly a million Californians face potential long-term health problems because they receive unsafe drinking water. The letter also said that more than 370 water systems in the state failed to meet water quality standards as of December 2021. Residents in the Central Valley are most likely to be impacted by these failing water systems.

Rosa Espinoza, an activist who works in Lanare and attended the rally, says that there’s still a lot of work to be done to make the right to water a reality.

“I've been in this advocacy for nearly ten years, so it's kind of frustrating to be back here again,” Espinoza said.

Activists at the rally advocated for the passage of bills that would help Californians pay off their water debts, as well as measures to ensure that the water they receive is clean.

One piece of legislation mentioned by activists was Senate Bill 222. It would create a fund to assist low-income Californians in paying off their bills for both drinking water and wastewater services.

Like Montes, Espinoza says that her family has relied on bottled water because the tap water in her home is too dirty. It’s a cost that she says many families can’t always afford on top of their water bills.

“We're lucky enough that we get help from an organization that provides us tanks of water, but without that help, we would have had to buy one tank of water each week,” Epinoza said.


She added that a tank of water a week can be expensive, costing thousands of dollars over the course of a year.

While the bill would permanently establish a water rate assistance fund, it doesn’t say where the money in it would come from. Senator Bill Dodd, who introduced the bill, says that he’s aiming to secure funding for at least one year. He attended the rally to show his support.

“We have to really dig in to try to figure out what that looks like,” Dodd said. “We have money right now in the budget … [but] we’ve had some years where that’s not the case.”

He says that he wants to “continue to work on it to make sure that we can get this as a multi-year project.”

Another bill discussed at the rally was Assembly Bill 2201, which adds extra requirements for anyone seeking to approve permitting for a new groundwater well. A piece of the legislation requires that applicants seeking a permit for a new agricultural well must prove that the new well won’t negatively impact existing wells in the area.

“Too often, counties allow for new wells to go right next to domestic wells or community wells, completely dewatering them or drawing contaminants in,” said Pedro Calderón Michel, a spokesperson for the advocacy organization Community Water Center. “That needs to change.”

The future of these bills should be decided this month.