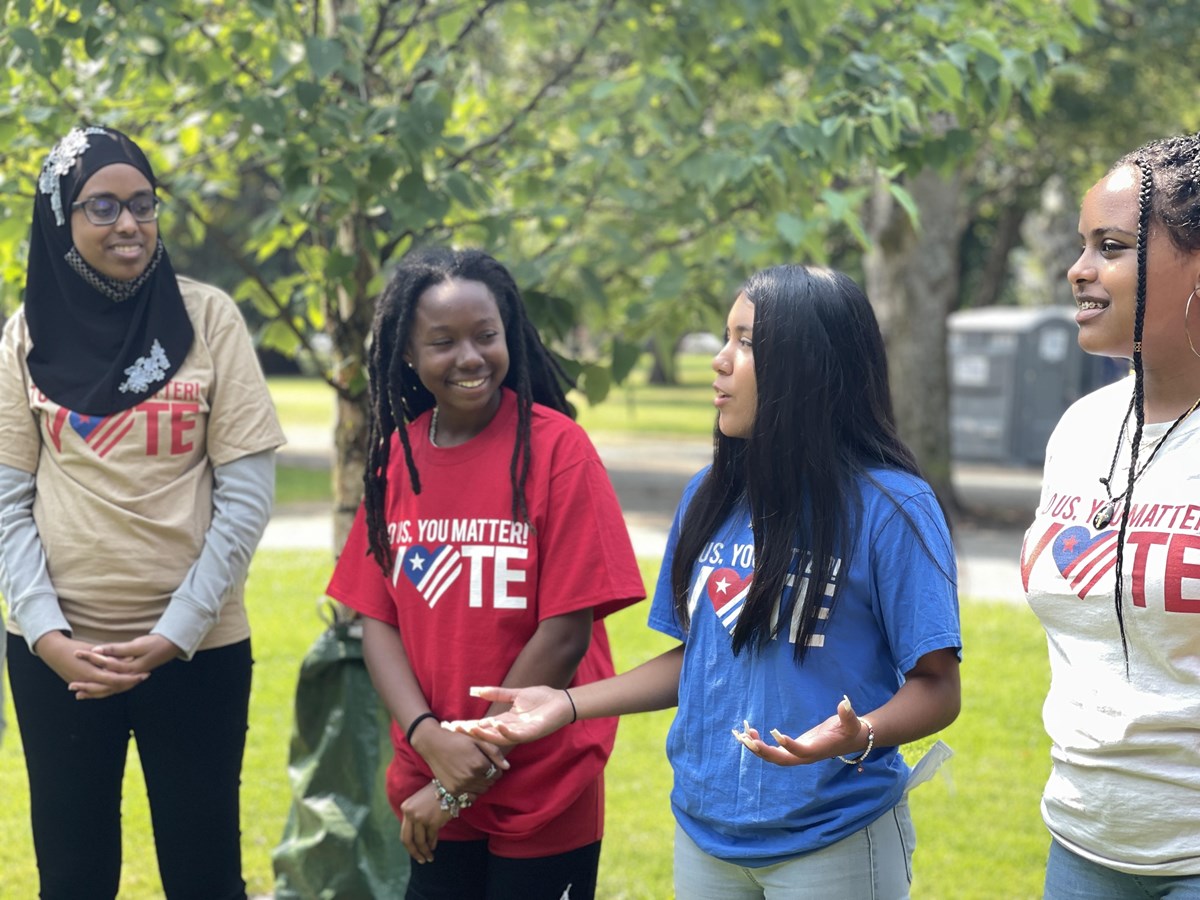 Jennifer Hernandez (in blue) getting out the vote as part of her work with the MLK Freedom Center.

Courtesy of the MLK Freedom Center

The 2020 election had the highest voter turnout in United States history — but not in California.

While the Golden State's voter turnout was the highest it has seen since the ’50s, it ranked 35th in the country that year. And during the recent primary election in June, less than 39%  of Sacramento County's registered voters went to the polls — one of the lowest turnouts in the past few election seasons.

The need for civics engagement in the diverse Sacramento landscape is apparent.

Paired with low voter turnout, Black and Latino students in California are among the least likely to be exposed to civic engagement opportunities and education. Morais freely gives up his weekends to take part in the Martin Luther King Jr. Freedom Center’s civics education program because he wants the next generation to be ready for the task at hand.

“I think being a part of the program gives me a better insight into what civics is,” Morais said. “Going over it step-by-step is a good way to help get civic engagement into students’ minds so they are more knowledgeable about it.”

Disenfranchised youth in California without access to civics education were less likely to advocate for themselves or pursue higher education — a change in the trajectory of their lives.

“Many students are not receiving the civic education necessary to support informed and active participation in civic and political life,” Assembly member Mia Bonta (D–Oakland) wrote in an email.

MLK Freedom Center’s mission to make changes for high-poverty, vulnerable communities involves testifying and partnering with elected leaders to influence law. Most recently, they collaborated with Bonta and a handful of other lawmakers on a resolution to prioritize civics education in schools.

It begins with education

For decades, concerned Californians have pushed for broader civics education.

Buses full of East Bay activists, led by then-Assembly member Barbara Lee, traveled to Sacramento in 1995 to push a bill that created a state-funded center dedicated to the legacy of Dr. Martin Luther King. The center would focus on civics engagement, youth and nonviolence.

From Oakland and Sacramento to Washington state and Alabama, the MLK Freedom Center continues to tackle civics education in the U.S. from all angles: classroom practices, legislation and partnerships with local organizations.

Morais finds value in interacting with scholars and changemakers from across the country.

“It’s cool to be surrounded by like-minded people who have the same mindset, people who want to see change,” he said. “Where I live, there are a lot of people who aren’t willing to speak out about issues.”

The civics education program provides space for marginalized students of color to dream and create actionable change. In weekly Saturday classes, students study movements by marginalized people that have pushed progress. Part of these interactive class sessions include writing poetry as a way to develop self-confidence and assist each student in curating their voice — both crucial to participating in the democratic process.

After reading activist Marge Piercy’s poem, “If They Come In The Night,” one student, Ashaia Bennett from Washington state, wrote her own response.

“Oh Ashaia / You come from a place where walls cave in / But that doesn’t stop you from smiling when you wake up / To only pedal faster when the road seems to be getting longer,” Bennett begins her poem.

As a young Black girl, Bennett’s poem relays a sense of urgency. She conveys a need to be more and want more despite her circumstances, addressing the duress under which vulnerable Black and Brown youth have persisted.

The exercise is advocacy in practice.

“We write down our thoughts and what is on our minds. And then, we speak it in front of people, so it’s not just trapped in our mind,” Morais said.

David Gaines is a product of the civics education program at the MLK Freedom Center. In seven years, he went from student to working at the Center. Prior to joining, he was living in Oakland, falling behind in high school and feeling powerless.

“I can say for sure that I would not be where I am, had it not been for this program,” said Gaines. “I didn't have a feeling of ownership over the issues in my community. I just saw that things were bad and didn't know what to really do about them.”

He says the MLK Freedom Center helped him develop the capacity to make contributions to his home, school and community life.

‘I have a chance to speak for myself and for others’

In Sacramento County, the MLK Freedom Center brings together high school students of color from all districts to be proponents of change in their municipalities.

Ashlynne Bracamonte, a student at Natomas High School, is determined to make positive changes. During her time with the MLK Freedom Center, she has also had the opportunity to intern at City Hall where she was able to speak with city officials and visualize her future.

In a conversation that she had with Sacramento City Manager Howard Chan, Bracamonte remembers him emphasizing the importance of being a person of color in a position of leadership.

"They may be looking at us as random Brown people, random Black people, but they still see we can hold power in this city," she said. "We can make something of ourselves. We, as the largest part of the diversity in the city, can be someone in the city and make changes."

She has also used her internship to utilize her civics learning to advocate for her community. She has championed causes like WiFi access for young people in Sacramento, COVID-19 education and outreach, and a pay increase for teachers.

However, Bracamonte is most concerned about hostile community culture and its lack of coverage in Sacramento. She says that dialogue can serve as an antidote to violence in her community.

“We're very diverse. We're very culturally focused. However, there is a lot of violence,” she said. “We're still seeing people dying, people that look like us… And there needs to be more to address that.”

Those difficult conversations are pivotal for youth at the MLK Freedom Center. To further support that type of youth engagement, the center brings together teens from across the country.

“I'm seeing I'm not alone. As the younger generation, a lot of the times we feel like our voices are drowned out,” Hernandez said. “Now, I have a chance in this world, and I have a chance to speak for myself and for others and to support them.”

For her, civics education is the union of shared experiences, support and advancement. These are tenets she has embraced as part of the MLK Freedom Center program.

“Civic engagement is a social responsibility, and we're all interconnected,” Hernandez says.

Students like Bracamonte and Hernandez believe in representation and community-building. And with the skills developed through the Center’s civics education program both are able to identify how they’d like to approach their communities and their leaders.

Hernandez continues: “One issue that affects one person affects everyone else.”