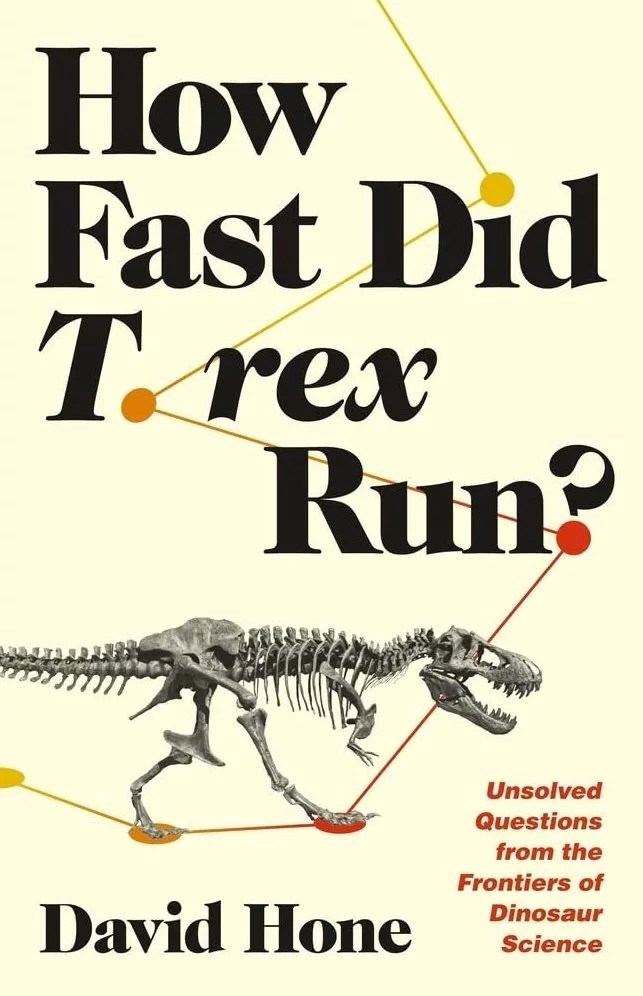 What color were the dinosaurs? Watching the Jurassic Park movies, the answer seems clear: gray, brown or, at best, dull green.

In a new book, British paleontologist David Hone dryly asks: "Has there ever been a more tediously colored set of animals than as seen across those movies?"

In How Fast Did T. rex Run?, Hone sets the record straight. Some dinosaurs sported red, white, or iridescent black colors, and showed patterns of colorful patches, spots, or stripes. A small dinosaur called Sinosauropteryx from China, for instance, is described as "'ginger' with white stripes."

How do scientists reconstruct colors of animals that have been extinct (except for birds, and more on them in a moment) for 65 million years? The key, Hone explains, are "packages of pigments" called melanosomes found in cells. Many living animals, including humans, have melanosomes and they also are found in rock formations that contain preserved dinosaur skins or feathers. It's extraordinarily fortunate that a melanosome's shape reflects exactly its color type: "So while the fossil melanosomes have no color now, we know what they should have held and from that we can work out the colors."

Hone set out to write a book that stresses what isn't yet known about dinosaurs as much as what is known. (Regarding the title, how fast T. rex ran is one of the unknowns.) He achieves this balance beautifully. The volume is jam-packed with gripping descriptions of advances in dinosaur science, while also serving as a handbook for anyone wishing to identify central gaps in our knowledge. Regarding color information, for instance, he laments the "frustratingly incomplete" nature of the data: Whether colors were muted or bright is unclear — and only about six dinosaurs have been studied so far. We have no idea of the range of color variation across species, sexes, or individuals over time.

Though I am thrilled with observing or learning about almost any animal, dinosaur fever, in childhood or adulthood, somehow eluded me — until now. I was captivated by Hone's inviting manner in laying out everything from the basics to the more advanced aspects of dinosaur science.

During their reign on Earth, dinosaurs — around 1,500 species of them — lived in nearly every ecosystem on the planet. Though the stereotype of tropical swamp-living creatures is firmly embedded in popular culture, in fact dinosaurs lived "on mountains, in deserts, lakes and seashores, temperate and coniferous forests, and across all manner of temperatures, rainfall, snow, winds, and other variations in both climate and weather."

Dinosaurs are divided into three types or clades. Theropods are bipedal, often carnivorous dinosaurs including Tyrannosaurus and Velociraptor. Sauropodomorphs like Brontosaurus and Brachiosaurus walked on all fours, and had huge bodies and long necks. Ornithischians are plant-eaters, often displayed bony plates and crests, and included Stegosaurus and Triceratops.

How long was the dinosaurs' reign? Here, I offer a complaint. Hone at various points says that dinosaurs were around for "130-something" million years, 150 million years, or "180-ish million years." An unexplained discrepancy of 50 million years is not trivial even in a book on what's not fully known in dinosaur science, and is confusing for readers.

But when he delves into the details, Hone is superb. In addition to dinosaur appearance, he covers extinction, origins, preservation, diversity, evolutionary patterns, habitats, anatomy, mechanics, physiology, coverings, reproduction, behavior, ecology, dinosaur descendants, and changing aspects of research and communication. It's difficult to choose favorites here, but the chapter on reproduction was among the most mind-blowing.

Hone includes in that chapter an image, taken by himself in China, of a nest of eggs laid and curated by a giant oviraptorosaur. The caption underscores what we can see in the photograph: "The eggs are laid in multiple layers in a ring and the animal likely sat in the middle." There's an irony to be found in the fact that this dinosaur exhibits parental care of the eggs: "Oviraptorosaur" means "egg thief." When researchers first uncovered skeletons of this dinosaur in association with eggs, the assumption was eating of other dinosaurs' eggs, not brooding. Dinosaurs called titanosaurs apparently didn't brood but instead, judging from the location of their egg beds and the composition of the eggshells, warmed the eggs by volcanic heat. That behavior is "utterly unexpected," Hone notes.

There's much we still don't understand about dinosaur reproductive biology. Did the female or the male sit on the eggs, or did they trade off? Backing up a bit to the moments of mating, Hone again exhibits some dry humor: "How on earth are you supposed to get two ungainly and very prickly ankylosaurs together, or some of the giant multi-ton bipedal theropods, or the biggest of the sauropods?"

Ten thousand dinosaur species are alive today: the birds, of course. Hone has a lot to say about the origin of the bird lineage, again balancing strong evidence with open questions. Birds and dinosaurs co-existed for around 100 million years, so we do know that birds did not originate only after the famous extinction event of 65 million years ago. Flying reptiles called pterosaurs and the non-avian dinosaurs all vanished at that point, and "very large numbers" of bird lineages as well. The bird survivors were the species largely confined to the ground but still capable of flight, apparently pointing to the fact that arboreal birds experienced more severe habitat loss.

And what of that extinction event? Yes, the asteroid that hit Mexico's Yucatan Peninsula remains the leading contender to explain dinosaur loss. But Hone intriguingly complicates that story. He raises the possibility that if the asteroid "had sailed past Earth without so much as a scratch" the dinosaurs might well have gone extinct anyway because they were already struggling to survive in world severely altered by earlier volcanic eruptions.

Tucked away at the back of the book, past the references section, is a request by Hone for readers to fill out a brief online survey that seeks to discover who may have become inspired to learn more about dinosaurs. "Keeping track of what impact my work has on the general public helps me to keep doing it," Hone notes. I predict he's going to hear lots of good news very soon.