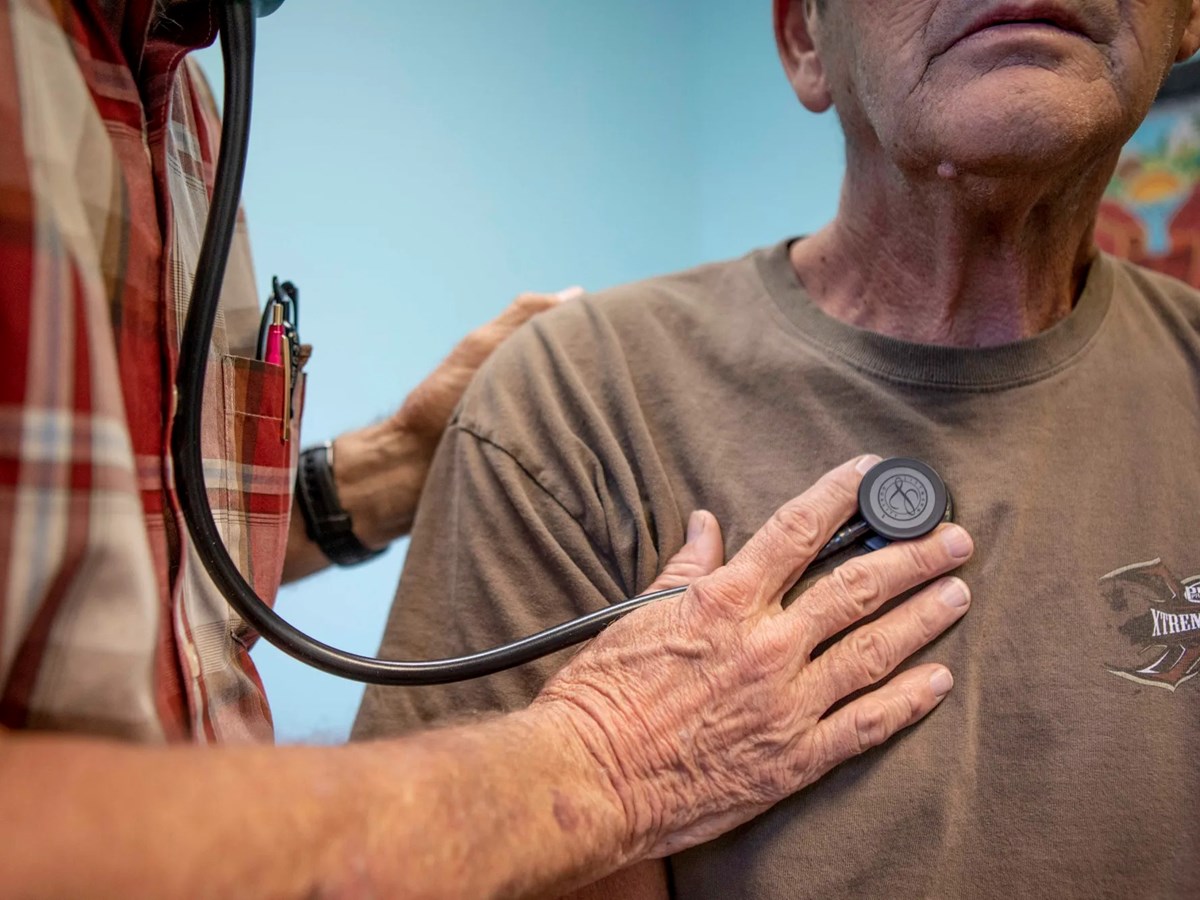 A doctor listens to a man's heart beat at a clinic in Bieber, California on July 23, 2019.

Premiums for health insurance plans sold through the state marketplace will increase an average of 6% next year, Covered California officials announced today.

This rate hike is the largest California has seen since 2019. In the last three years, insurers had kept average increases under 2%.

Rate changes vary by region — from an 11.7% increase in Imperial, Inyo and Mono counties to zero change in Fresno, Kings, and Madera counties.

When premiums increase, an individual’s financial aid usually does, too. Aid is based on household income, so subsidies may offset some of the increase. But people who don’t qualify for subsidies will bear the full cost of the rate hike.

“Premiums are a capturing of what health care costs are, how they vary across geographies and communities, how health care costs are growing over time, which we know in this country are already too high and rising,” said Jessica Altman, executive director of Covered California.

She noted that California’s rate hike is still lower than it is in other states. A recent Kaiser Family Foundation analysis found a 10% average premium increase proposed by 72 insurers in 13 other states.

The rate increase, Altman said, is largely attributed to people resuming doctor visits and procedures that they postponed during peaks of the COVID-19 pandemic. There is also the cost of general inflation.

About one percent of the increase, however, is attributed to the potential loss of enhanced subsidies from the federal government, which are set to expire at the end of this year. Without the additional aid, people will pay more for their premiums, likely pushing young, healthy people to drop their coverage. And when healthy people leave the marketplace, premiums go up for everyone.

The federal government’s American Rescue Plan last year provided California with around $3 billion designated for two years of additional financial aid through Covered California. The new law helped further reduce what people paid for their monthly premiums, driving more people to sign up for health insurance. It also expanded who was eligible for savings to include middle-income individuals.

Currently 1.7 million Californians buy their coverage through the state marketplace. Covered California has estimated that if Congress does not renew the American Rescue Plan subsidies, about 1 million people will see their premiums double and about 220,000 would likely drop their coverage.

“(The rate increase) for the subsidized population is almost divorced from what they pay out of pocket. What’s more important is what happens with the (American Rescue Plan) subsidies,” said Christine Eibner, a senior economist for the RAND Corporation, a think tank.

Altman said the sooner Congress acts the better the chance of avoiding consumer confusion in the fall. Covered California usually sends renewal notices to enrollees beginning in October, ahead of the sign-up period, and having clarity for people by then is key.

“There have been references both ways —  ‘Will it be permanent? Will it be temporary? Will it stay in the current form?…Or will there be some adjustments to it?’ — and we really don’t know,” Altman said about the conversations happening in Washington, D.C.

California’s 2022-23 budget includes $304 million for middle-class marketplace enrollees that would kick in if Congress does not renew the aid. While helpful, it would not fill the hole the annual $1.7 billion federal aid would leave, Altman said.