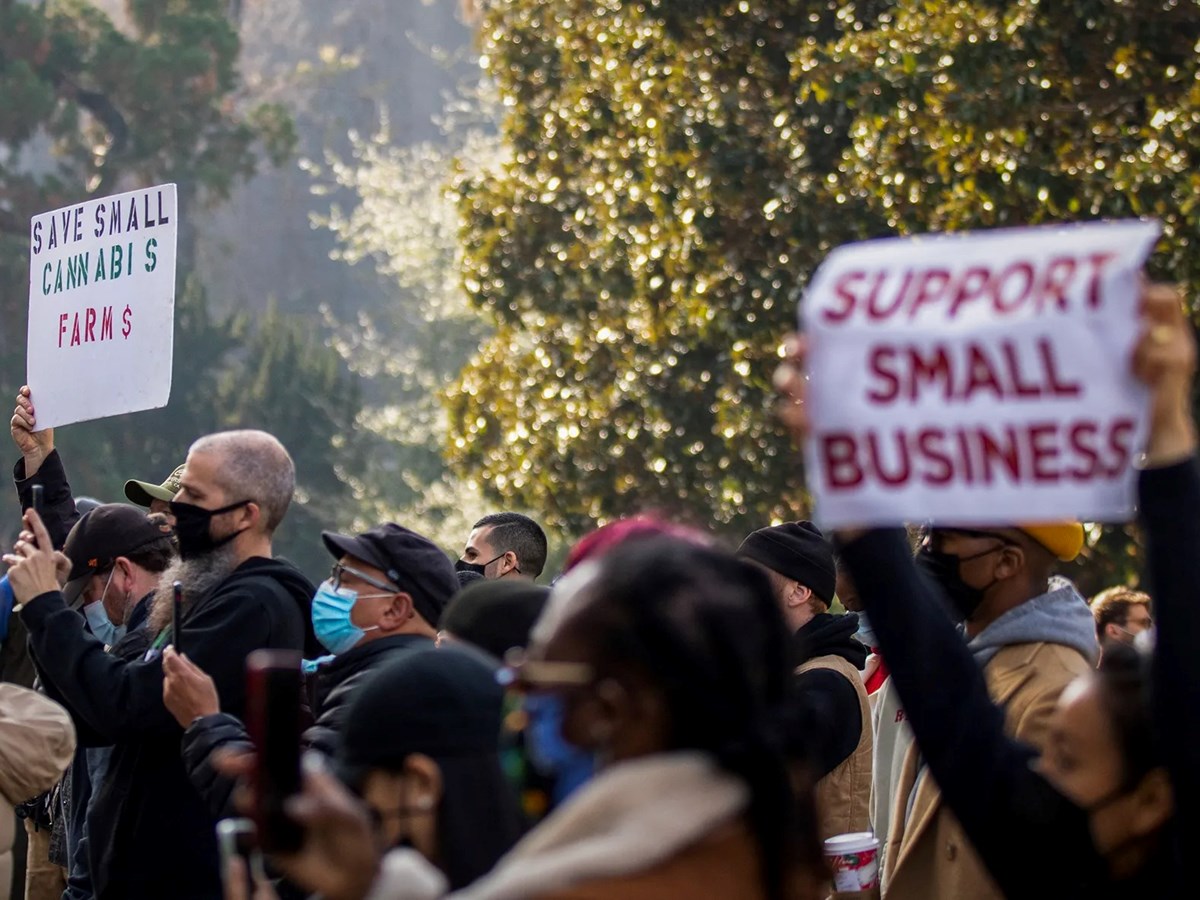 Supporters for equity cannabis tax reform gather at a rally at the state Capitol on Jan. 13, 2021.

California is significantly overhauling its cannabis tax structure, including entirely eliminating a tax on growers, in an effort to boost a struggling legal industry begging for relief.

The changes, which were adopted last week as part of a broader state budget agreement, will also create tax credits for some cannabis businesses, expand labor rights within the industry and switch collection of a state excise tax from distributors to retailers. That tax will pause at 15% for three years, after which regulators could raise the rate to recoup lost revenue from discontinuing the cultivation tax.

Prominent cannabis industry groups praised the plan for its potential to lower costs and help make legal sales more competitive with an illicit market that remains robust six years after California voters legalized recreational marijuana. Yet even as the measure won overwhelming approval in the Legislature, it was met with vocal discontent from retailers who say they will not benefit and several lawmakers who complained that it did not do enough to address ongoing racial disparities in the industry.

While efforts to secure further assistance from the state may continue, they seem unlikely to gain favor any time soon with Gov. Gavin Newsom, who signed the tax revision on Thursday.

“I’m incredibly proud of this bill. It accomplishes an incredible amount of things for the betterment of all Californians,” Nicole Elliott, director of the Department of Cannabis Control and Newsom’s top cannabis adviser, told CalMatters. “So I think we need to take a moment to reflect on the fact that something great got done.”

Eliminating cultivation tax was a priority

Amy Jenkins, a lobbyist for the California Cannabis Industry Association who was heavily involved in the negotiations, said zeroing out the cultivation tax was a priority for the legal industry — something it has sought for three years.

Growers complained that the tax, a flat $10.08 per ounce for flowers, was making it difficult to keep operating as prices tumbled from a glut of weed and not enough dispensaries to sell it. Wholesale prices have dropped by as much as 50% over the past year, particularly squeezing farmers whose outdoor crops sell for less and forcing many smaller operations to close down.

“Any delays in that happening was something that we were not able to accept,” Jenkins said. 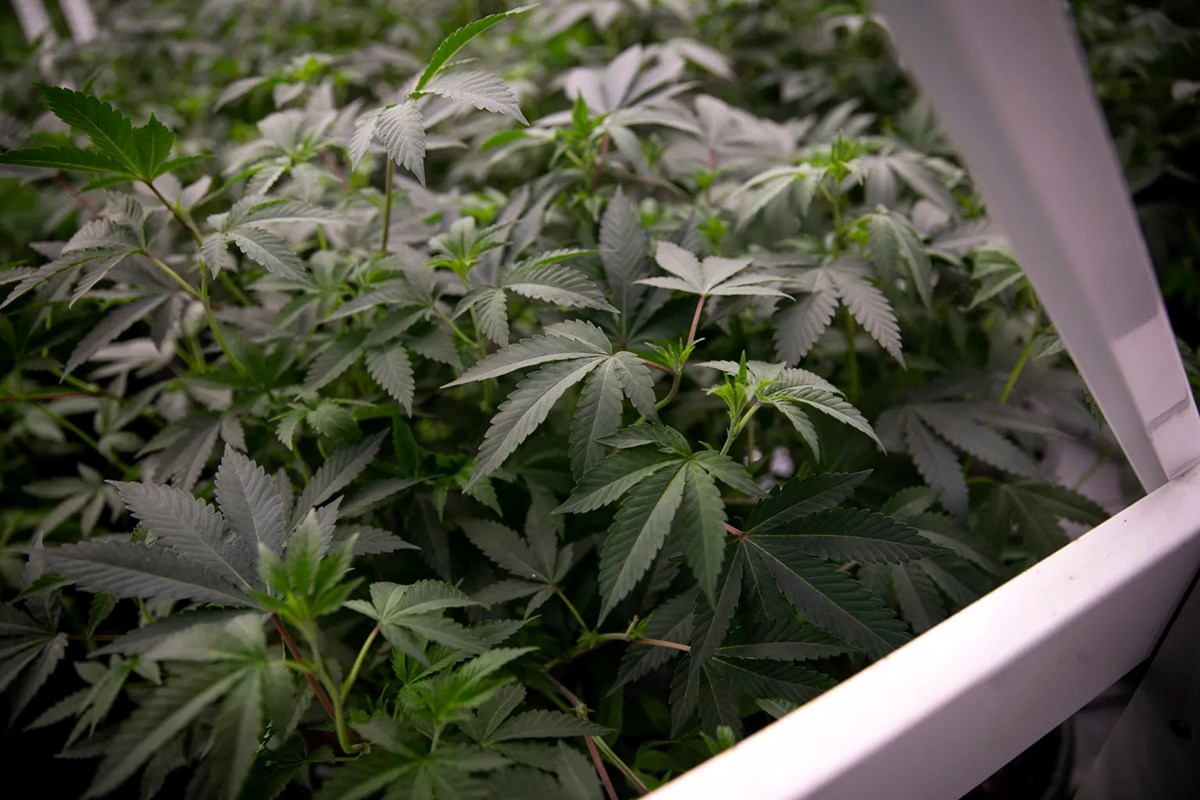 Supporters hope that eliminating the cultivation tax could have a beneficial ripple effect through the legal market, lowering costs that compound for consumers through the wholesale price, the excise tax and sales taxes.

It could also turn plant trimmings, which were taxed at $3 per ounce for leaves, into another viable commodity for farmers, said Genine Coleman, founder of the Origins Council, an advocacy group representing cannabis businesses in the historic Northern California growing region known as the Emerald Triangle. The leaves can be useful for manufactured products such as creams.

“It’s incredible to have the cultivation tax eliminated,” she said. “It had become so untenable.”

Coleman said the tax restructuring package was about as good as she could have hoped for, given the constraints of Proposition 64, the 2016 legalization measure that earmarked cannabis tax revenue for child care slots, environmental cleanup and impaired driving prevention efforts.

Newsom pushed for a revenue-neutral approach to protect funding levels for those programs. The budget includes $150 million to backfill any shortfalls in the next three years, before the state can begin raising the excise tax.

But that looming tax increase is a major disappointment for many in the industry, who say taxes must be cut even further for legal cannabis to ever compete on price with the illicit market.

Coleman pointed to other major regulatory expenses for growers, including licensing fees and environmental compliance requirements. She also wants the state to play a larger role in opening up retail opportunities that remain prohibited in most jurisdictions in California.

“It’s not enough at all. And it’s just simple math,” she said. “Our position has always been: We need tax reform and.”

Moving collection from distributors to the point of sale, where products can be taxed on the actual purchase price rather than an assumed 80% retail markup, will improve accuracy. Jenkins believes that tax revenues could actually rise as a result, giving the industry an argument against raising the excise tax and potentially even to lower it.

“We have three more years to fight that fight,” she said.

Cannabis retailers, who did not receive a direct tax cut like growers, have expressed far more dissatisfaction with the deal. And advocates for social equity operators — who received their licenses through local programs intended to diversify the industry with more people of color, formerly incarcerated people and residents of neighborhoods with historically disproportionate cannabis arrest rates — have been particularly blistering in their criticism.

“What we’ve gotten are essentially crumbs from this bill,” said Amber Senter, executive director of the advocacy group Supernova Women, who organized several rallies at the state Capitol this year. “The cultivators will see relief, they will see a little bit more money in their pockets, and none of that is going to trickle down.”

The deal will allow equity licensees to get a $10,000 tax credit and keep a fifth of the excise tax revenue they collect for the next few years. But advocates had lobbied for more sweeping aid, such as a suspension of the excise tax altogether, to give their businesses a greater opportunity to establish a foothold.

Senter dismissed the tax credit as token assistance that would not even cover the cost of licensing fees. She also expressed concern about another provision that could have far greater significance in the long run: Starting in 2024, the plan lowers the threshold to 10 employees for businesses that must enter into labor peace agreements, thereby providing unions access to communicate with and attempt to organize their workers.

As the bill came before the Legislature last week, several lawmakers spoke out on the floor against what they said was insufficient aid for cannabis retailers and equity operators, including state Sen. Steven Bradford, a Gardena Democrat who introduced legislation this session to reduce the excise tax. He called the provisions for equity operators “minimal and insulting” and was one of only a handful of legislators not to vote for the measure.

In an interview, Bradford expressed frustration that the cultivation tax was completely eliminated for growers, who are overwhelmingly white, while equity licensees received far less. He said he worried that plan would only deepen racial disparities in the industry, where Black and brown communities targeted during the war on drugs have struggled to thrive.

“That’s a hard pill to swallow,” he said. “At some point, when are we going to put the real weight and work behind what we all say exists?”

Bradford said he would continue to push to lower the excise tax for equity operators and other steps to move minority-owned businesses to the top of state efforts to bolster the legal cannabis market.

“Without a doubt, there needs to be more work,” he said. “If we fall short of that, we’ll come back next session.”

Elliott, the director of the Department of Cannabis Control, defended the tax restructuring deal as a collaboration between Newsom and legislative leaders to “simplify, simplify, simplify” the law for businesses across the industry.

“That reflects a willingness to be critical of the systems that are in place and trying to modify them,” she said.

No one can get everything they want in a compromise, Elliott said, but everyone is coming away from the deal with financial relief and regulatory improvements.

“They didn’t have any of this yesterday. So today is a better day,” she said.