California ballot measures: What you need to know 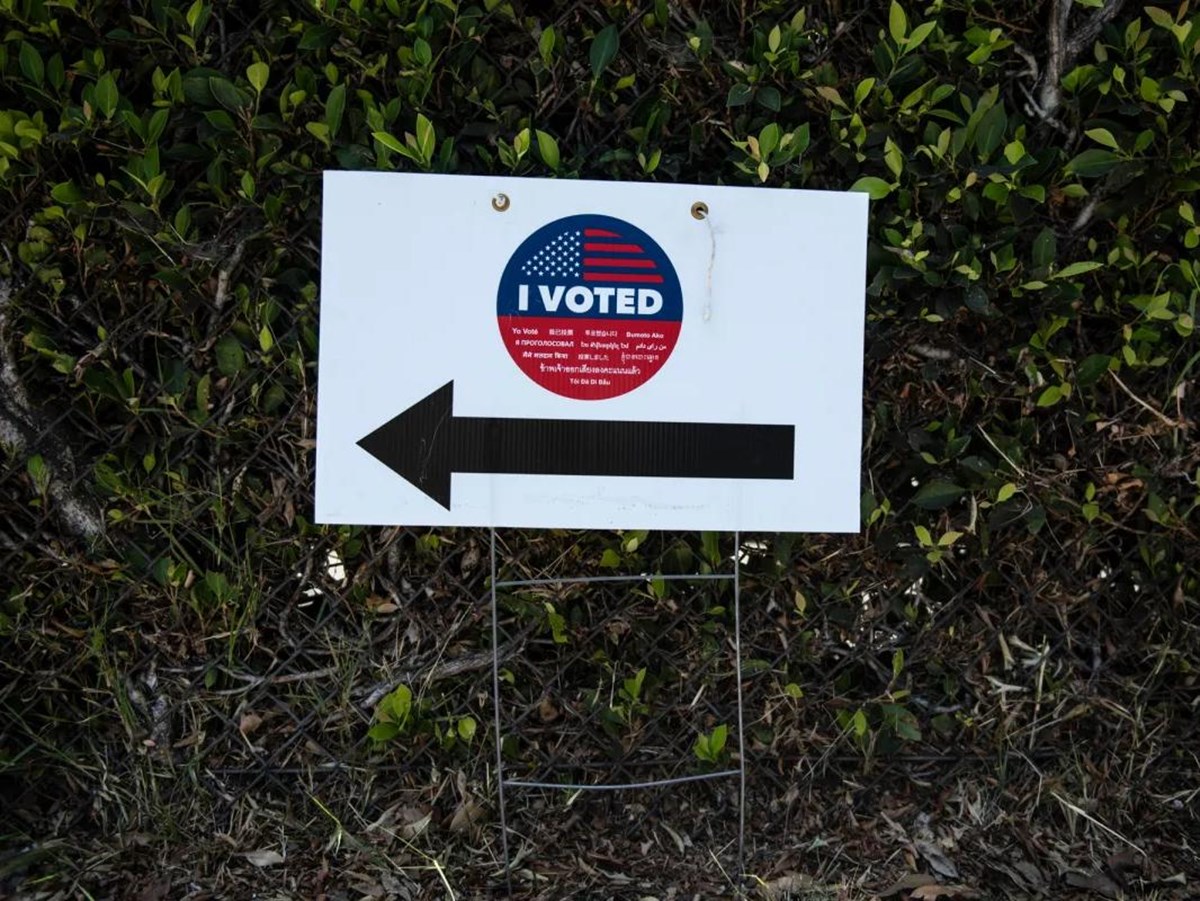 A voting sign outside a polling station in Los Angeles on June 7, 2022.

Photo by Pablo Unzueta for CalMatters

Much is expected of the California voter.

In any given election year, we may be asked to dust off our labor lawyer hats, brush up on oil and gas regulations, reacquaint ourselves with decades of tax policy, or analyze infrastructure funding. We may have to weigh the moral pros and cons of capital punishment, marriage equality or pig protection and — over and over again — oversee all things dialysis clinic.

This November is no different. Voters will be asked to consider seven thorny policy proposals, from abortion to zero emission vehicles. Many more failed to qualify for the ballot, including one to raise the minimum wage to $18 an hour. That means voters will decide the fewest measures in an election year since 1916.

What are these ballot measures really about? How did they make their way onto the ballot in the first place? And how did Californians first fall in love with direct democracy?

Below, California’s passion for propositions, explained.

What’s on your November ballot? 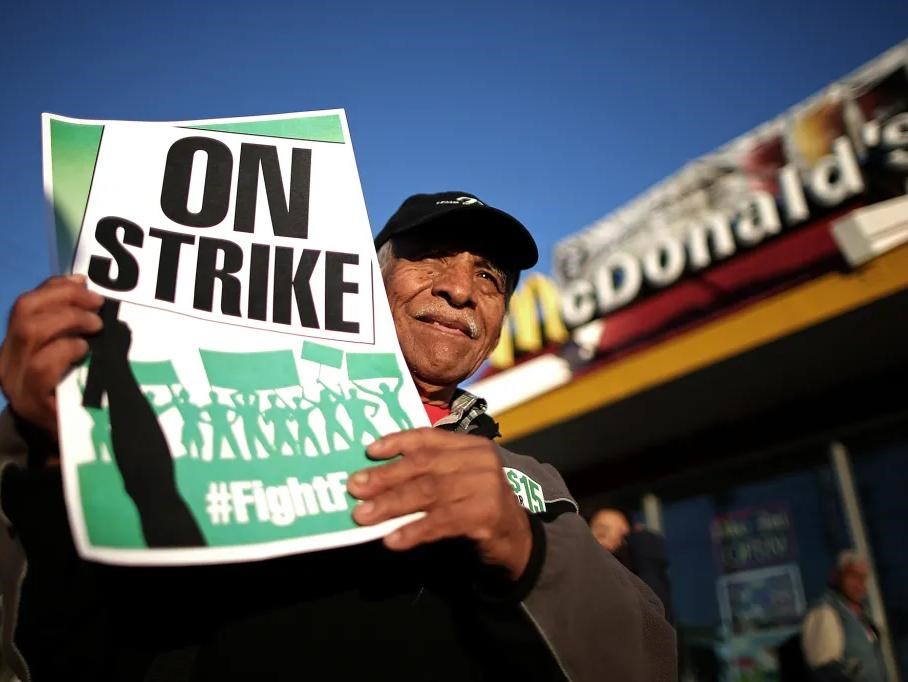 Fast food worker Rogelio Hernandez participates in a “Fight for $15” wage protest in Los Angeles on Nov. 29, 2016. A ballot measure would increase California’s minimum wage to $18 an hour.Photo by Lucy Nicholson, Reuters

After months of signature gathering, fundraising and legislative wrangling, we have details on the ballot measures that you can vote on this fall. 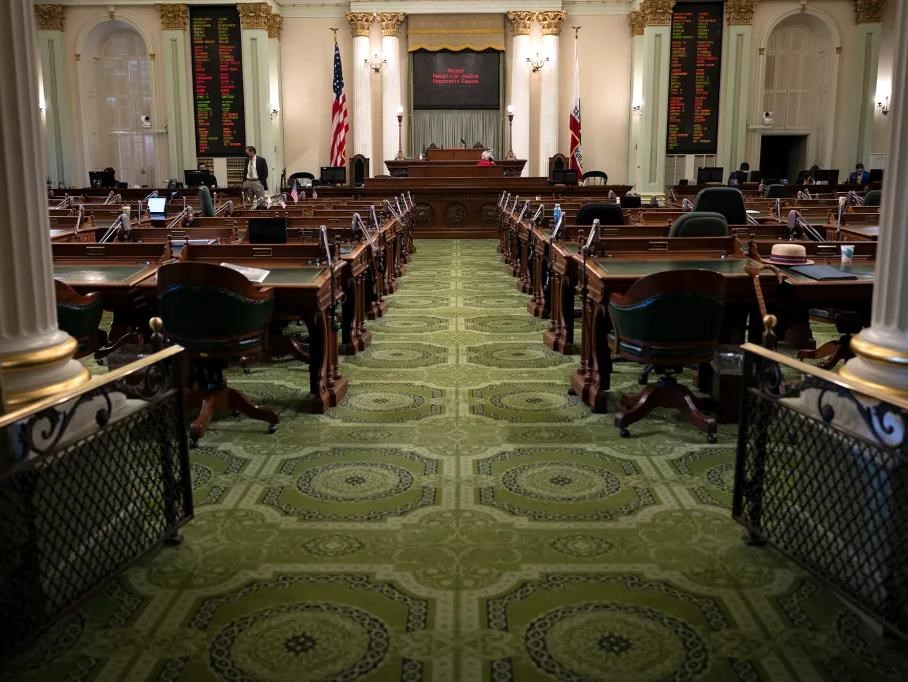 The Assembly floor at the state Capitol on May 31, 2022. Since 2014, lawmakers have had more time to negotiate with proponents and keep propositions off the ballot.Photo by Miguel Gutierrez Jr., CalMatters

By 2014, California voters were sick of ballots larded up with too many measures, many of them highly technical, specific to one industry or difficult to understand.

So state lawmakers changed the rules. While initiatives can only go before voters in November, a tweak to the election code gave the Legislature more time to hold public hearings on those upcoming measures, while giving initiative backers the chance to revise or remove initiatives later in the process. The goal was a more deliberative, thoughtful process with more room for compromise.

But one person’s “compromise” is another person’s “legal extortion.”

Since 2016, initiative sponsors have pulled five partially-qualified measures from the ballot, but only in exchange for concessions from the Legislature. The most notorious example came in 2018 when the soda industry funded a ballot measure that would have made it much more difficult for local governments to raise taxes. They pulled from the initiative — which then-Gov. Jerry Brown called an “abomination” — after lawmakers agreed to ban new local soda taxes for the next 13 years. Critics at the time equated the strategy with nuclear brinksmanship and hostage taking, but most Democrats in the Legislature, however irate, weren’t willing to risk sending the tax-capping proposition to the voters.

This year, two off-ballot compromises were struck. Attorneys and consumer groups agreed to withdraw a measure that would have raised the cap on how much patients can sue for medical malpractice in exchange for a lower increase. And the former CEO of recycling company Recology and some environmentalists decided just before the June 30 deadline to pull a measure to phase out the use of non-recyclable plastic in exchange for an alternative bill.

So that’s two fewer measures for you this November. 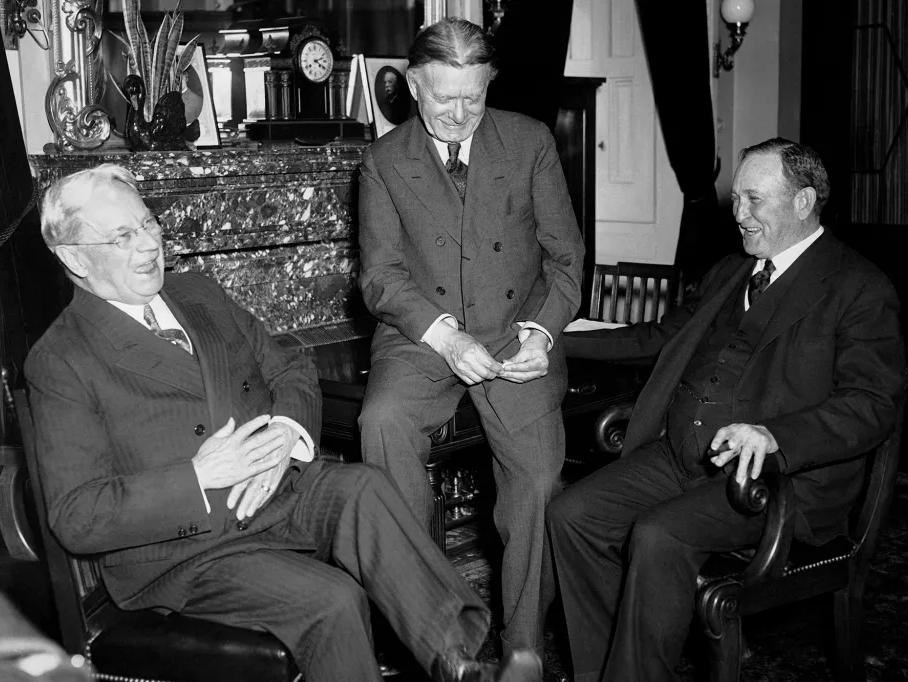 From left, then-U.S. Sens. Hiram Johnson of California, William Borah of Idaho and Joseph T. Robinson of Arkansas in Washington, D.C., on Jan. 17, 1935. As governor, Johnson signed the initiative and referendum law in California.AP Photo

California is one of 24 states with an initiative process.

While the state has had some way for citizens to initiate laws since 1898, it formally adopted the ballot initiative process after a special election on Oct. 10, 1911, when then-Gov. Hiram Johnson signed into law the ability for voters to recall elected officials, repeal laws by referendum and to enact state laws by initiative.

The push for more direct democracy was a part of a movement across the U.S. in the late 1800s for social and political reform. In California, it was fueled by concerns over the influence that Southern Pacific Railroad and other “monied” interests had over the Legislature.

From 1911 through the most recent ballot measures in November 2020, there have been 2,068 initiatives cleared for signature collection. Of those, 392, or about 19%, qualified for the ballot. And of those that made the ballot, 137, or 35%, have been approved by voters, including 39 constitutional amendments.

What’s the difference between a referendum and an initiative?

A referendum allows voters to approve or reject a statute passed by the Legislature, but with some exceptions: “urgency” statutes necessary for public peace, health, or safety; statutes calling elections; or laws that levy taxes or provide appropriations for current expenses.

Initiatives, which are more common than referenda, propose new statutes, as well as amendments to California’s constitution. Since 2011, initiatives can only appear on the November general election ballot.

The long and winding road to the ballot 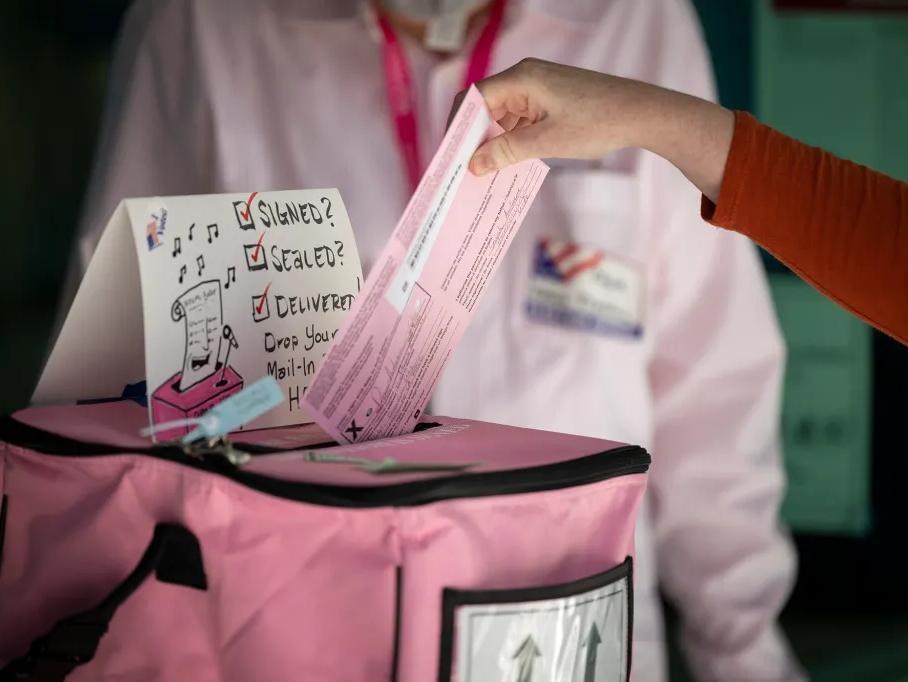 A voter casts their mail-in ballot at the California Museum in downtown Sacramento on June 7, 2022. Besides the same statewide offices as on the primary ballot, the November ballot will include numerous propositions.Photo by Miguel Gutierrez Jr., CalMatters

What can be an initiative? Anything that’s the “proper subject of legislation” – as long as it only addresses one subject.

To get an initiative or referendum on the ballot, there are a few steps that can begin more than a year before the election.

In California, unlike in some other states, the ballot title and summary are not drafted by the secretary of state or an election board. The language is meant to be neutral, but former attorneys general Xavier Becerra and Kamala Harris were accused sometimes of not staying impartial.

For example, in 2020, Becerra described Proposition 6, a measure that would have repealed a $5 billion a year package of taxes and fees on motorists, as: “Eliminates certain road repair and transportation funding. Requires certain fuel taxes and vehicle fees to be approved by the electorate.”

After a lawsuit, a judge ordered the first part of the sentence to be rewritten, but that was overturned by a state appeals court, which ruled that the attorney general has “considerable latitude” in drafting the title. (A proposed initiative to transfer the drafting authority to the nonpartisan Legislative Analyst’s Office failed to qualify for the November ballot.)

A statewide ballot measure is approved by a simple majority vote of the people.

The founding story of the California ballot measure is an electoral tale of David versus Goliath. In 1911, progressives introduced the initiative statute, the referendum and the recall as a way to wrest ultimate lawmaking authority away from a corrupt Legislature and bestow it upon the electorate.

But from the early days, Goliath learned how to fight back.

“The controlling factor is money,” said Glen Gendzel, a history professor at San José State University who has written about the early history of Californian direct democracy. “If it’s a pay to play system, then those who have the most money are going to play the most.”

In 1920, white agricultural interests helped sponsor a measure banning Japanese immigrants from owning farmland. In 1926, the dairy lobby waged an expensive war against margarine producers. Throughout that decade, private utilities helped defeat three efforts to establish a public hydroelectric power agency. As early as 1923, a special legislative committee came to a depressing conclusion about California’s experiment with direct democracy: “Victory is on the side of the biggest purse.”

That wasn’t always the case — nor is it today. Sometimes the appearance of trying to buy a law can backfire. In 2010, PG&E spent nearly $50 million — more than 300 times the opposition — on a campaign to make it more difficult for local governments to set up their own public power agencies. The utility lost.

In recent years, many business interests have gone to the ballot not just to advance their own policy goals, but to reverse the work of California’s increasingly Democratic Legislature. That strategy paid off for ride-hailing app companies and bail bond agents in 2020, when both industries spent millions to undo state laws aimed at transforming or outlawing their business models. No doubt cigarette and vape liquid manufacturers were taking note. This year, they’re funding an effort to nix a state ban on flavored tobacco.

Why so confusing sometimes? 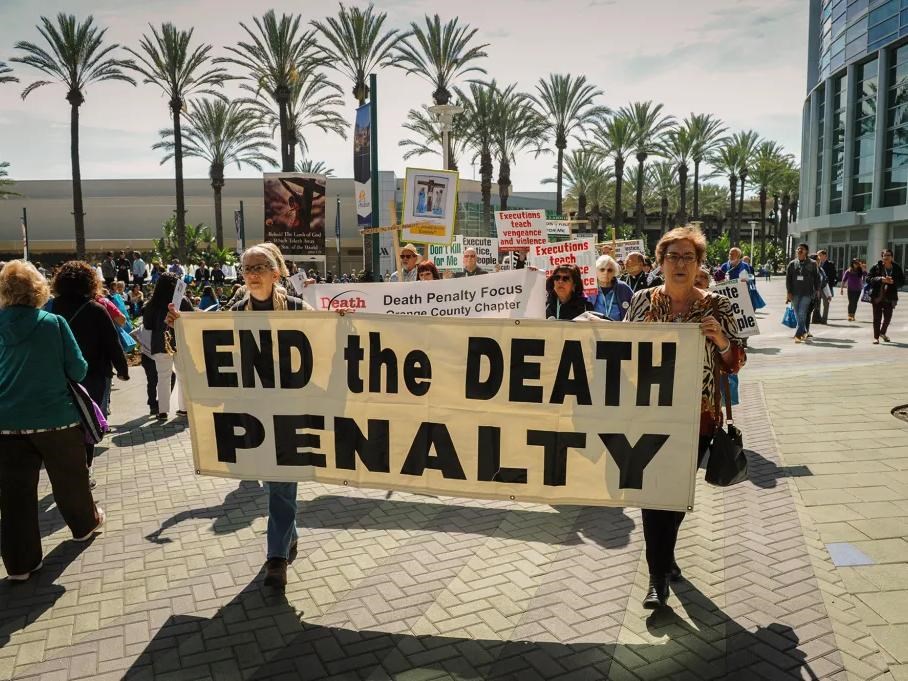 Demonstrators march during a rally organized by “Catholics Against the Death Penalty-Southern California” in Anaheim on Feb. 25, 2017. In November 2016, voters faced competing ballot measures on capital punishment.Photo by Andrew Cullen, Reuters

But if multiple measures pass that conflict, the measure or provision of a measure that receives more “yes” votes is the one that goes into effect.

This November, that’ll be the case with the big-money battle between competing online sports betting measures, one sponsored by national giants in the industry, the other by some Native American tribes.

One of the most recent examples was in 2016, when there was Proposition 62 to repeal the death penalty, but also Proposition 66 to speed up the appeals process for capital punishment by putting trial courts in charge. Because 51.1% of voters approved Prop. 66, it superseded Prop. 62, approved by only 46.8%.

In 2010, Prop. 20, a measure adding congressional redistricting to the duties of an independent redistricting commission, competed with Prop. 27, which aimed to disband the commission. Prop. 27 failed.

And on the 1988 ballot, Californians faced five competing initiatives on car insurance reform. Voters passed just one. Also in 1988, Prop. 68 and Prop. 73 went head-to-head on the regulation of political campaign contributions. Prop. 73 received more “yes” votes, and after a legal battle, the California Supreme Court ruled it would take effect – only to be tossed out by another lawsuit.