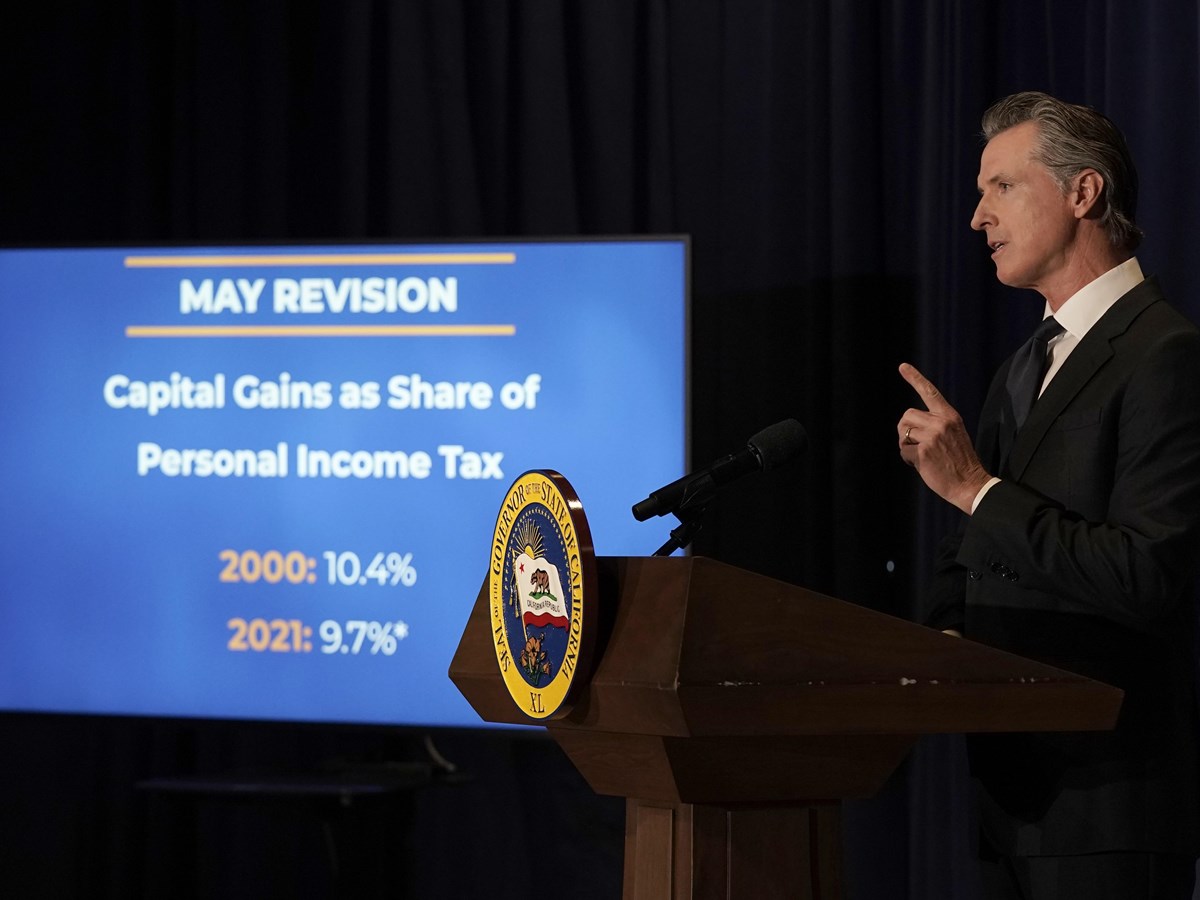 California Gov. Gavin Newsom outlines his 2022-2023 state budget revision during a news conference i in Sacramento, Calif., Friday, May 13, 2022.

California lawmakers adopted a $300 billion budget Wednesday night that will provide refunds to most taxpayers in the state, pour resources into expanding abortion access and extend health care to more undocumented immigrants.

With the start of the fiscal year looming on Friday, Gov. Gavin Newsom and legislative leaders announced a deal on Sunday night for the state spending plan, which has grown to a record size as the economy recovered faster than anticipated from the coronavirus pandemic.

Negotiations dragged on for several weeks as Newsom bargained with the Democratic leaders of the state Senate and Assembly over whether to tie the tax relief to car ownership; funding increases for universities, housing and social safety net programs; the details of a major climate package; and a plan that would give state regulators more control in approving clean energy projects.

The final agreement — which includes $234.4 billion in general fund spending and currently awaits the governor’s signature — is similar in many ways to a placeholder budget that the Legislature passed earlier this month to meet a constitutional deadline.

But at Newsom’s insistence, new spending commitments were slashed by several billion dollars and some appropriations will only be triggered in future years if revenue estimates hold up. As the state eyes another potential economic downturn, reserves will grow to nearly $38 billion, including more than $23 billion in the general rainy-day fund.

With tax revenues surging, driven by massive income gains among the wealthiest Californians, state leaders maneuvered to avoid the Gann Limit, an obscure provision that prohibits spending above a certain level per capita. Increased infrastructure and emergency expenditures, which are exempt in certain circumstances, as well as the tax refunds, will keep the state below the limit for the next few years. The Legislature is now considering placing a measure before voters on the 2024 ballot that would loosen the Gann Limit restrictions.

The tax rebate program, which has been publicly debated for months, is the centerpiece of the budget deal. Under the $9.5 billion plan, more than 95% of taxpayers — those making as much as $250,000 a year, or $500,000 if they file jointly — will receive a payment this fall. The amounts vary based on income and whether the recipients have dependents, so a low-income family with children will receive $1,050, while a single taxpayer with a higher income will receive just $200.

To reach Californians who do not file taxes, the state will also increase Supplemental Social Security grants by about $39 per month for individuals and $100 for couples, while welfare grants through CalWORKs will increase by an additional 10 percent for the next two years. But many retirees who receive Social Security from the federal government and do not file taxes will still be left out of the program, because officials said the state does not have a way to account for them.

The Legislature overwhelmingly approved the budget on Wednesday night — by party-line votes of 28-6 in the Senate and 59-7 in the Assembly — and sent it to the governor’s desk. While some Republican lawmakers complained about a rushed process that left the public little time to review the contents of a massive bill, Democrats praised the spending plan for offering real help to Californians.

Here are other significant aspects of the budget deal:

The agreement earmarked $40 million in one-time funds to subsidize the cost of providing abortions to low-income or uninsured patients, including those who come from out of state. The deal also commits $20 million over three years to create the California Abortion Support Fund, which would hand out grants to women who need help paying for in-state travel, lodging, child care and other expenses that advocates say prevent many low-income women from accessing abortion services. 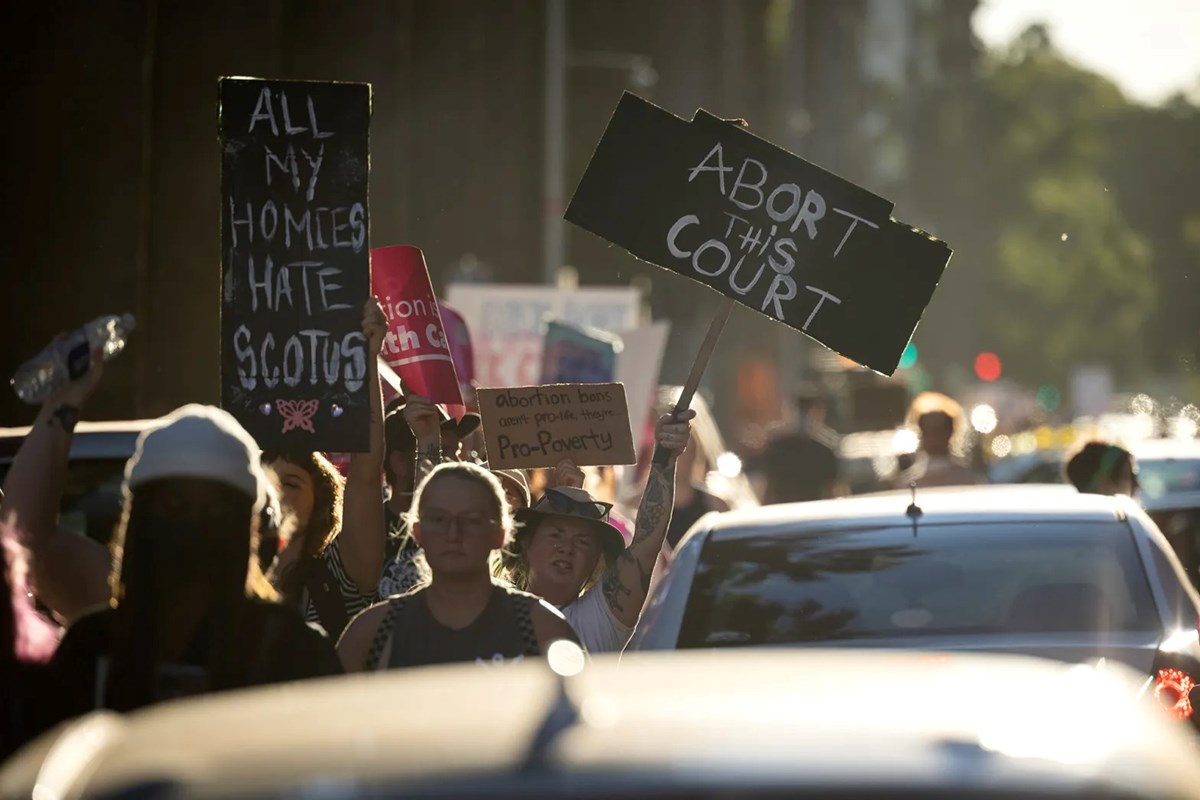 Abortion rights supporters marched in protest of a Supreme Court ruling that overturned Roe vs. Wade, in Sacramento on June 25, 2022.Photo by Miguel Gutierrez Jr., CalMatters

More than $60 million will go towards shoring up the health care workforce by training more clinicians in abortion care and defraying higher education costs for future clinicians that commit to providing reproductive health services.

Other elements of the spending deal support a 15-bill package moving through the Legislature to expand abortion access. This includes one-time payments of $20 million for abortion clinics to improve physicial and digital security, $10 million for family planning services and $15 million for community-based organizations to improve sexual and reproductive health education. An additional $15 million in ongoing funds will go to Medi-Cal providers that perform abortions.

The budget deal expands social spending, including by extending state health coverage to low-income undocumented immigrants of all ages and food assistance to immigrants ages 55 and older, who are currently excluded from the CalFresh program. The state will become the first in the nation to extend state food assistance to such immigrants.

The agreement gives low-income Californians a boost in cash aid through the CalWORKs program and assistance in paying overdue utility bills incurred during the pandemic. Former foster youth receive $1,000 a year through a new tax credit program.

The budget deal includes more than $260 million toward allowing single parents who get cash aid through CalWORKs to also receive their child support checks, moving away from a longstanding state practice of keeping child support payments to reimburse itself for the welfare grants. The two-part plan starts with families who are already off CalWORKs; starting in 2025, parents currently receiving cash aid get access to their full child support at the same time.

Lawmakers and the governor compromised on how far to go in reducing an obscure $300 late fee that courts often tack onto traffic tickets and other infractions. Civil rights advocates argue the practice can cause a simple fine to balloon as much as tenfold for poor defendants who cannot afford to pay the original ticket. Newsom’s administration remained opposed to a full elimination of the fine, which would have cost the state $100 million. Instead, the deal allocates $10 million to forgive current debts and the fine would be reduced to a maximum of $100, which could prompt civil rights groups to renew a lawsuit they filed against the state court system challenging the practice.

Some relief is coming for small businesses. Under the new deal, the state will give $250 million to small businesses and nonprofits to offset the cost of offering up to two weeks of additional paid sick leave for COVID-19, a requirement added by the state in February.

More aid will be coming down the line. All employers will face tax increases starting in 2023 to pay back a massive loan the state received from the federal government to cover the surge of Californians claiming unemployment benefits early in the pandemic. That tax will increase by $21 per worker each year until the more than $17 billion loan is paid off. But the budget sets aside $500 million to help small businesses offset the higher taxes starting as soon as 2024, and directs $1 billion to paying down the loan principal this year.

The deal also allocates millions to upgrades at the embattled department that handles unemployment benefits. The Employment Development Department will receive, for example, $10.2 million to upgrade its cyber security, $21.5 million to support fraud investigation and prosecution efforts and $136 million for the first year of a multi year department-wide modernization project.

Tucked into a budget trailer bill is an attempt to attract jobs away from less progressive states. Potentially starting in July 2023, decisions about which businesses receive a grant to add new jobs in California can factor in whether the company would be relocating jobs away from a state that limits access to abortion or “permits discrimination” on the basis of sexual orientation, gender identity, or gender expression. Newsom first teased that idea in a May speech, encouraging companies to come to the Golden State, where the “values that you express in your public documents are actually reflected in terms of the work we do as a state.”

Another windfall for public schools

Following last year’s record-breaking education budget, public schools will receive yet another historic windfall. The final budget agreement increases the base funding for the local control funding formula, the mechanism through which most of the state’s public schools are funded, by $9 billion, or 13%. That means even more money for districts that serve high numbers of foster children, English learners and students from low-income households.

This is the largest single-year increase to the formula since its inception in 2013. The boost is a much-needed remedy for districts that have struggled to pay for ongoing costs such as salaries and benefits with one-time funding from the state and federal governments. However, in addition to the billions of dollars that schools have already received to navigate the pandemic’s aftermath, the budget includes another $8 billion in learning recovery grants that expire in five years.

This new money is paired with a measure that would help districts avoid a sudden drop in funding due to plummeting enrollment and attendance rates during the pandemic. State school funding is based on daily average attendance, but under the plan, school districts will have the option of using a three-year average or a pre-pandemic attendance rate applied to current enrollment. Public schools could have lost billions in funding without these alternatives.

The budget adds $4 billion in ongoing funding for before-school, after-school and summer school programs. With this appropriation, the state exceeds its $5 billion funding goal for these programs three years earlier than originally planned. The governor and legislators also agreed to expand eligibility and reduce class sizes for transitional kindergarten at a cost of $684 million.

But students can’t have longer school days and smaller class sizes without more teachers and aides. To help schools grapple with an ongoing staffing crisis, the budget allocates close to $2 billion in teacher preparation and retention efforts.

The final budget deal promises billions of new dollars for colleges and universities, money that will largely go toward campus expansion projects and building more student housing. But it does not include funding increases for the University of California and California State University that the Legislature wanted beyond what Newsom proposed, and the fate of one key priority for lawmakers and student advocates is up in the air.

The multi-year effort to expand financial aid to older students will be funded if the state has money for it in the 2024-25 fiscal year. The plan in the budget deal is to add another 150,000 students to the Cal Grants program to cover the cost of tuition at public universities, partially cover tuition at private institutions and give more community college students living grants of about $1,650. About 500,000 students already get the Cal Grant. The expansion costs more than $300 million annually. While there’s no way to know if the state will have the money for this expansion in two years, the agency overseeing the Cal Grant is getting $500,000 to start implementing the changes. 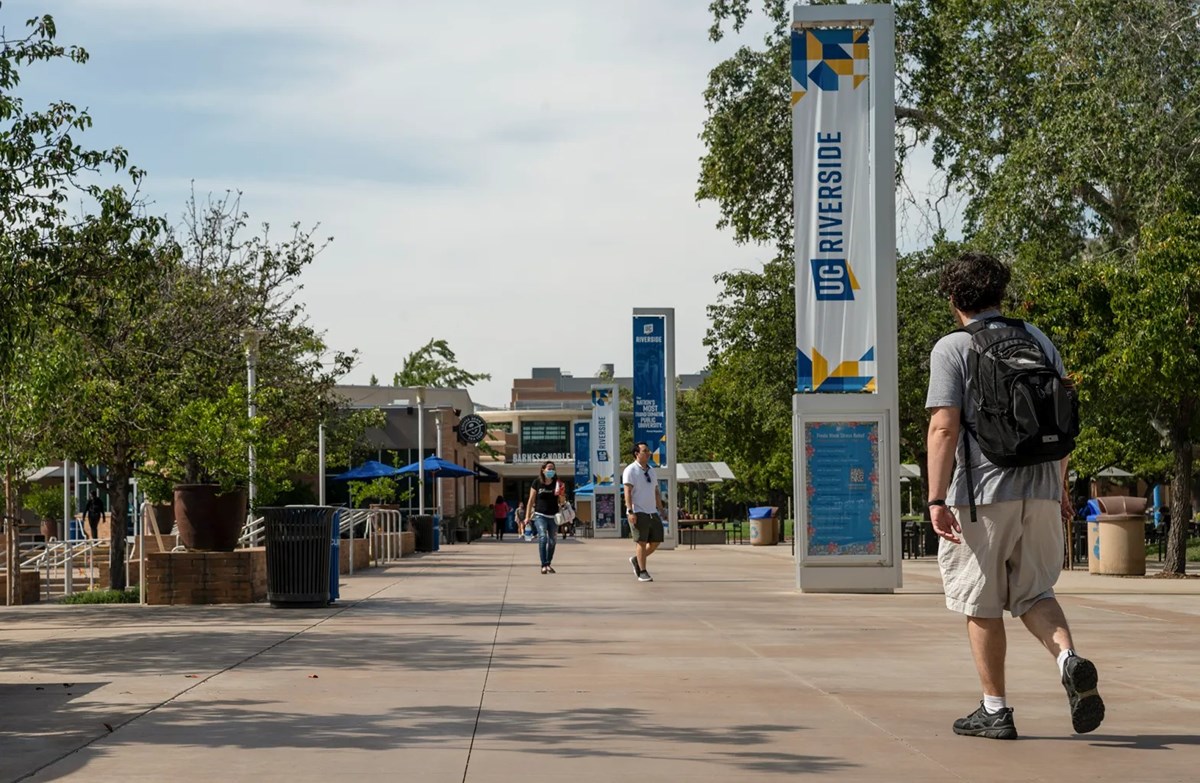 The University of California, Riverside campus in Riverside on June 9, 2022.Raquel Natalicchio for CalMatters