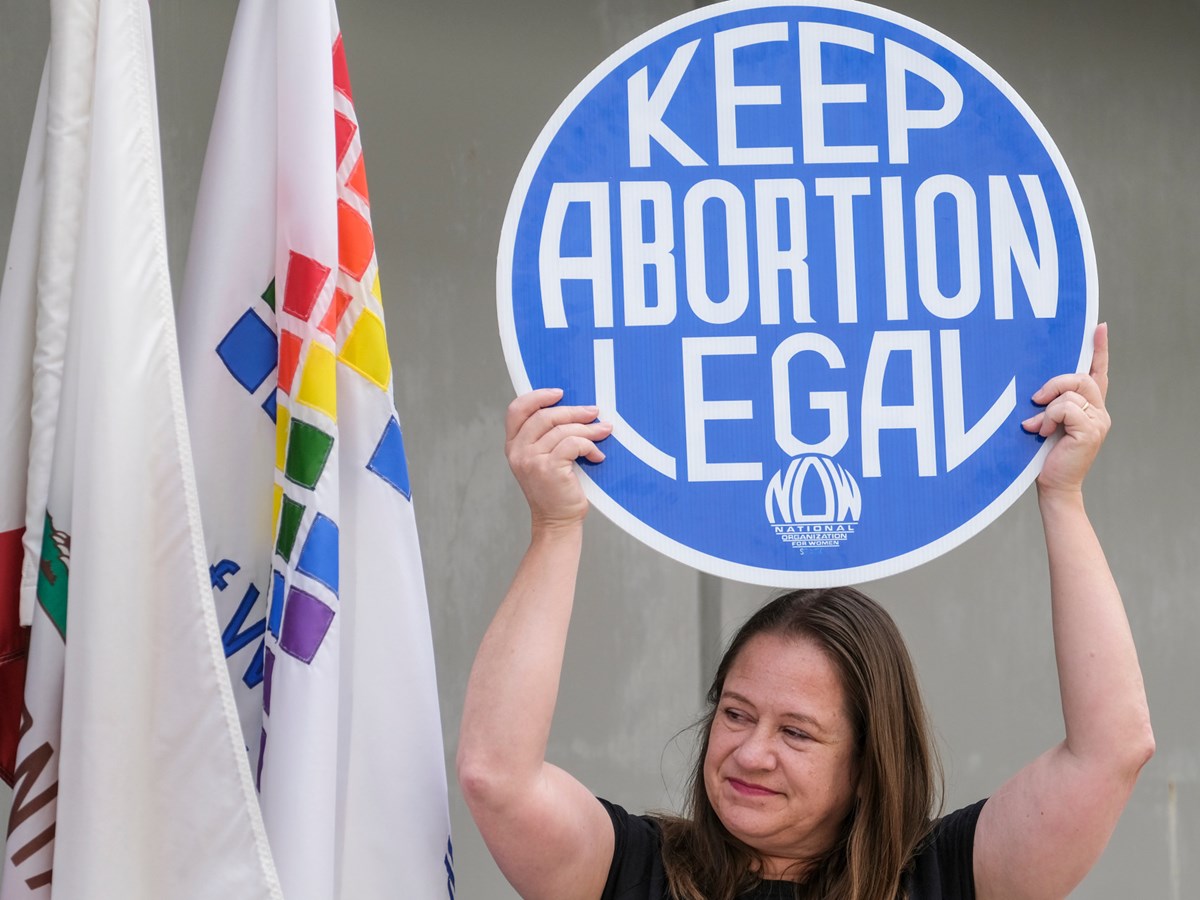 Living in a “post-Roe world” is no longer a phrase bandied about by abortion rights activists to describe a worst-case scenario. It’s reality.

The U.S. Supreme Court struck down Roe v. Wade June 24, eliminating the constitutional right to obtain an abortion that has stood for nearly five decades. A May leaked opinion draft that signaled an end to federal protections had already spurred on a push by Gov. Gavin Newsom and many state Democrats to make the state a “sanctuary” for people from elsewhere seeking abortions.

The court’s decision is a win for conservatives who have steadily chipped away at abortion rights nationally through lawsuits and legislation. A cascade of abortion bans were triggered in 18 states when the decision landed, and dozens of other state legislatures are considering 15-week bans, abortion pill bans and bans modeled after Texas’ controversial law that allows private citizens to sue anyone who helps someone obtain an abortion after six weeks.

California has firmly bucked the trend. A constitutional amendment prohibiting the state from denying or interfering with abortions is well on its way to the November ballot, where voters will decide on the measure. And a package of 13 bills aimed at removing barriers and protecting patients by strengthening privacy protections, ensuring providers and patients cannot be sued or prosecuted and funding procedures and travel costs has sailed through the Legislature with little opposition.

But California wasn’t always a bastion for reproductive rights. It took decades of black market abortions, a national rubella epidemic, an international drug scandal, several high-profile trials against physicians, and thousands of maternal deaths for California to decriminalize abortion.  In fact, abortion remained illegal in the state until 1967, when then-Gov. Ronald Reagan signed the Therapeutic Abortion Act.

In the ensuing years, California has garnered the distinction of being the state that goes furthest to allow easy access to abortion. So how did we get here?

California guarantees the right to abortion in statute and the state constitution. It covers the cost of abortion for lower-income Californians on Medi-Cal, and also requires private insurance to cover it. And the state has rejected the idea of requiring waiting periods or parental consent for abortion.

Here’s how its abortion policies compare to the rest of the country, based on a 12-point scale developed by The Guttmacher Institute.

Note: The Guttmacher Instititute was established as part of Planned Parenthood in 1968 but sought independent status roughly 10 years later and stopped taking financial contributions from Planned Parenthood more than a decade ago. Here are the 12 criteria for assessing state abortion policies:

The future of the fight

Gov. Newsom convened the California Future of Abortion Council in September 2021, bringing together more than 40 abortion providers, advocacy groups and legislators to examine the state’s reproductive landscape. The council released a list of 45 recommendations, from which 14 measures and a proposed constitutional amendment have sprung.

The bills — pending in the California Legislature, where both the Assembly and Senate have a supermajority of Democrats — aim to reduce cost barriers, shore up the reproductive health care workforce, and protect patients and providers from civil and criminal liability. Scroll to see the status of each:

The evolution of California attitudes

In the decades before California decriminalized abortion and began loosening restrictions, public opinion on the issue had begun to sway. Driven largely by the worldwide thalidomide tragedy and U.S. rubella epidemic, California women were seeking illegal abortions in droves.

Thalidomide was a sedative widely used in the 1950s to mitigate morning sickness in pregnant women, but unbeknownst to prescribing doctors it caused severe birth defects in the developing fetus, including limb malformations, kidney dysfunction and cognitive disabilities. Before most countries banned the drug, 10,000 “thalidomide babies” were born worldwide.

Many in California delved south of the border where a black market abortion industry boomed in Mexico, spurred by the 1953 Buffum decision. But the illegal procedures came at a high cost: Post-procedure infections, complications and death were common.

In a 1962 hearing before the Legislature, State Department of Public Health Officer Dr. Theodore Montgomery testified that illegal abortion was the leading cause of maternal mortality and attributed one-third of all maternal deaths to the procedure.

Then — in a time before vaccines — a rubella epidemic swept the U.S. in 1964, infecting 12.5 million people. Infection during pregnancy came with serious consequences, and 20,000 children were born with Congenital Rubella Syndrome, which included deafness, blindness and intellectual disabilities.

The risks associated with rubella didn’t meet California’s criteria for a legal abortion, however,  and more and more women sought illegal procedures in Mexico. By the time Dr. Leon Belous challenged the constitutionality of California’s ban in the state Supreme Court, hospitals on the California side of the border were reporting treating hundreds of women per month with complications from botched procedures.

Timeline: How California got here on abortion

When does California guarantee the right to abortion?

When is a fetus considered viable?

Can someone refuse to provide an abortion?

Do minors require parental consent to get an abortion?

U.S. abortion rate continues to fall — but California's is a mystery

In the years immediately following Roe v. Wade, the abortion rate skyrocketed across the country, reaching a high of 25 per 1,000 women of childbearing age, according to the Centers for Disease Control and Prevention. Since that time, the rate nationwide has fallen by half.

Declines in abortion are driven primarily by lower pregnancy and birth rates overall, which in turn are impacted by increased contraceptive access and use.

California, however, stopped providing abortion data to the CDC in 1998 and does not currently track abortion numbers. Why? The California Department of Public Health told CalMatters it did not have information on why it's failing to collect this basic data. The only publicly available data comes from the state’s Medi-Cal population, which represents low-income residents.

Who pays for California abortions?

Starting in 2023 in California, all abortion-related related services, including consultations and follow-up care, will be free. A new law prohibits insurance companies from imposing deductibles, copayments or other cost-sharing upon an individual seeking an abortion.

The California Health Benefits Review program estimates that the current average out-of-pocket cost is $306 for a medication abortion and $887 for a procedural abortion.

Medi-Cal, the state’s insurance program for low-income residents, funds the cost of abortion services with state money because the federal government, via the Hyde Amendment, prohibits most federal spending on abortion. California is one of 16 states to pay for abortions, and does so under court order.

Under state law, abortion and related services are considered basic health care and must be covered by all insurance providers, with the exception of self-funded insurance. California and New York are the only two states to require private insurance to cover abortion.

Private insurance may require prior authorization, meaning the patient must seek approval from the insurer prior to getting the abortion, but insurers are not allowed to refuse.

According to a UC San Francisco study on out-of-pocket abortion costs, 7% of those seeking abortion had private insurance coverage, compared to 34% with Medicaid (in California, Medi-Cal) and 29% who received funding from other organizations.

Who’s getting abortions in California

Most Medi-Cal abortions occurred among Californians in their 20s during the past seven years; they account for 57% of abortions.

However, this same age group also saw the steepest declines in the abortion rate between 2014-2020, decreasing by 32%.

In 2021, California contained 165 abortion facilities, according to UC San Francisco’s Advancing New Standards of Reproductive Health Facilities Database. The number of facilities appears to have increased — up from 151 facilities in 2017 — but large swaths of the state still lack a nearby abortion clinic.

Approximately 78% of Californians live in a census tract without a clinic — not necessarily an obstacle in dense cities where several census tracts are only a short drive or bus ride away, but potentially insurmountable for those living in remote rural areas where census tracts can span several counties.

And not all clinics are created equal, according to UCSF researcher Ushma Upadhyay, who leads the database team. More than half of the clinics provide only the abortion pill, and can’t conduct procedures beyond 10 weeks of pregnancy.

Anecdotally, and in other states, Upadhyay said there is some evidence that more primary care providers are prescribing abortion pills — but that’s impossible to verify in California given its refusal to collect state abortion data.

What Californians think about abortion

Over the past two decades, the share of California adults who support legal abortion has generally increased even as the issue has grown more partisan, according to the Public Policy Institute of California, which conducts non-partisan statewide surveys.

Today, the vast majority of Californians support Roe v. Wade’s guarantee of abortion access, with 77% of adults responding that it should not be overturned.

That majority holds regardless of political party, gender or race. Even among Republicans — the group with the highest proportion of voters opposed to abortion — 59% said they supported Roe.

Past polls have shown that public support declines to various degrees when people are asked whether they support using taxpayer dollars to pay for abortions, or allowing minors to obtain them without notifying their parents.