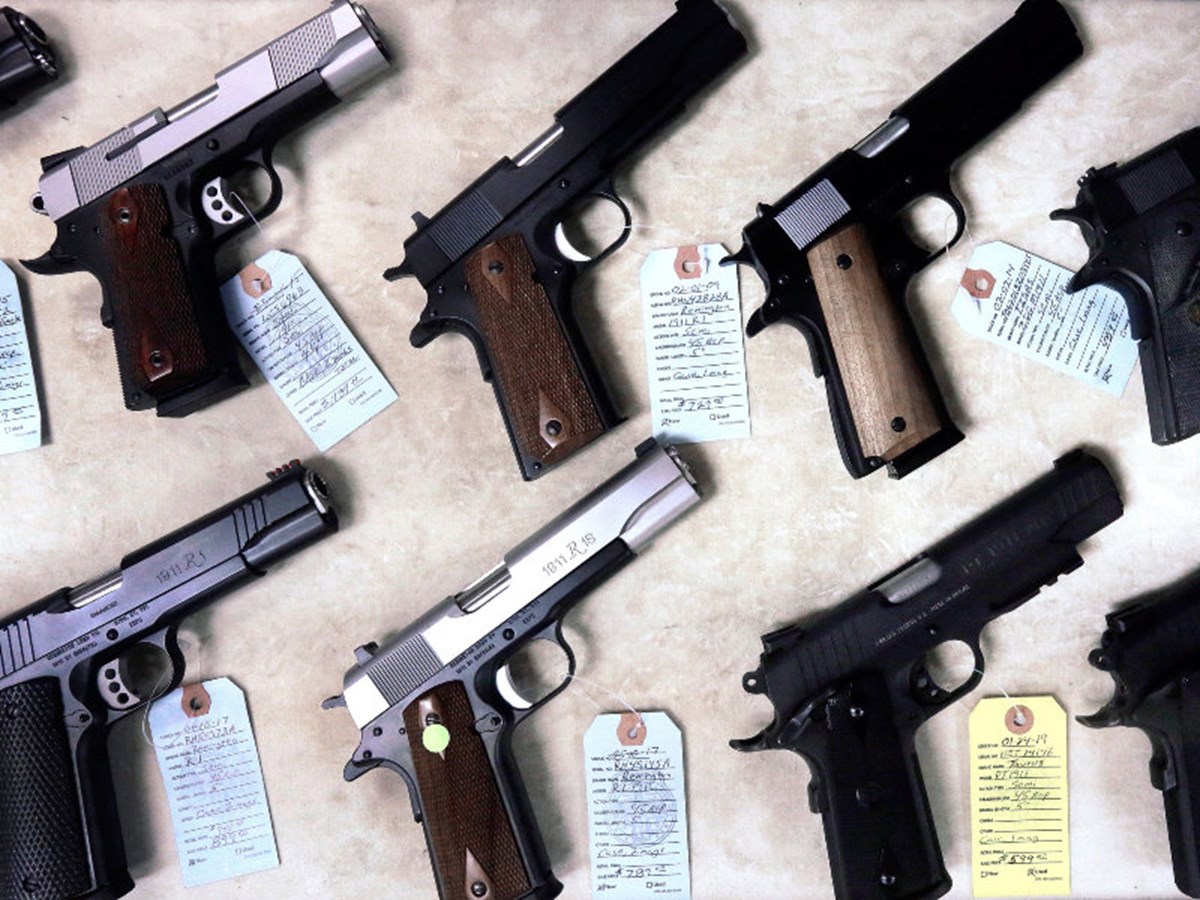 In summary: A U.S. Supreme Court ruling overturning a strict New York law on who can carry concealed weapons will likely lead to a challenge of California gun laws.

Today, the U.S. Supreme Court issued one of its most significant gun law rulings in more than a decade, tossing out New York state’s tight restrictions on who can carry a concealed gun in public.

Gun rights activists are celebrating the 6-3 decision, while advocates for stricter gun laws decry it. Both agree that California’s similar law may be next to be challenged.

The ruling likely marks the most dramatic expansion of gun rights in the United States since 2008, when the Supreme Court clarified for the first time that the Second Amendment’s right “to keep and bear” firearms applies to individual citizens, not just state militia members. But that ruling only affirmed the right for “self-defense within the home,” leaving states with wide discretion over whether and how to restrict guns elsewhere.

This ruling brings that constitutional right outside the home.

“Confining the right to “bear” arms to the home would make little sense,” Justice Clarence Thomas wrote for the court’s majority.

Gov. Gavin Newsom called the ruling “shameful” and a “dark day for America.”

“This is a dangerous decision from a court hell bent on pushing a radical ideological agenda and infringing on the rights of states to protect our citizens from being gunned down in our streets, schools, and churches,” the governor said on Twitter.

Attorney General Rob Bonta added that he would be working with the governor’s office and legislators to respond to the ruling. “More to come,” Bonta said in a tweet.

Most states either issue concealed carry licenses upon request or do not require licenses at all. But in eight states, applicants are required to show a compelling need before being granted permission to tote around a concealed firearm. Until today’s ruling, New York was one of those states. California is another.

“We know of no other constitutional right that an individual may exercise only after demonstrating to government officers some special need,” Thomas wrote, offering a description of New York’s concealed carry law, but also California’s.

How easily a Californian is able to obtain a concealed weapon permit depends on where they live. That’s because in California these licenses are issued by local law enforcement — either city police chiefs or county sheriffs. And while state law requires applicants to demonstrate “good cause,” local law enforcement officials have wide latitude to define what that means.

In counties with Republican sheriffs — Sacramento and Tehama, for example — permits are issued to all qualified applicants so long as they pay the necessary fees, take a firearms safety class as required by state law and don’t have a criminal record.

San Francisco sits on the opposite end of the spectrum. According to county sheriff guidelines, an applicant living in the city must “supply convincing evidence” that they are at “significant risk of danger” that local law enforcement “cannot adequately address” and “cannot reasonably be avoided by alternative measures.”

The court’s ruling doesn’t immediately invalidate restrictive concealed carry policies like those in San Francisco. But it does make legal challenges against California’s entire discretionary system much more likely to succeed.

First, Thomas wrote that local licensing officials shouldn’t have wide discretion to deny a concealed carry application if the applicant meets objective criteria. In California, that criteria requires an applicant to pass a background check and complete a gun safety course. But there’s nothing in the ruling that would prohibit the state from adding additional restrictions.

Second, the opinion acknowledged that states have the right to restrict firearms in “sensitive places,” such as schools or courthouses, though New York couldn’t simply declare all of Manhattan a sensitive place.

The opinion “doesn’t provide a lot of guidance about what’s in between, so it leaves that to future cases and lawmakers,” said Frelich.

In a press release issued this afternoon, Newsom said state lawmakers are “ready with a bill that will be heard next week to update and strengthen our public-carry law.”

But the ruling could have much more sweeping implications that touch on all areas of California gun laws — from the state’s ban on assault-style weapons and high-capacity magazines to its restrictions on “ghost guns.” That’s because today’s ruling sets a higher bar for any firearm restrictions.

He said today’s ruling is “going to simplify the whole process of judging whether or not a gun law is constitutional” and that the State of California will now have a harder time arguing that its strict rules are legal.

Freilich from the Giffords Law Center agreed that the ruling could have broad implications.

“The consequences won’t show up tomorrow or the next day but (the opinion is) a fundamentally rewriting of the legal landscape and the battlefield on which all Second Amendment cases have been fought,” he said. “It definitely puts at risk much of what California and other states have fought for and defended for decades.” 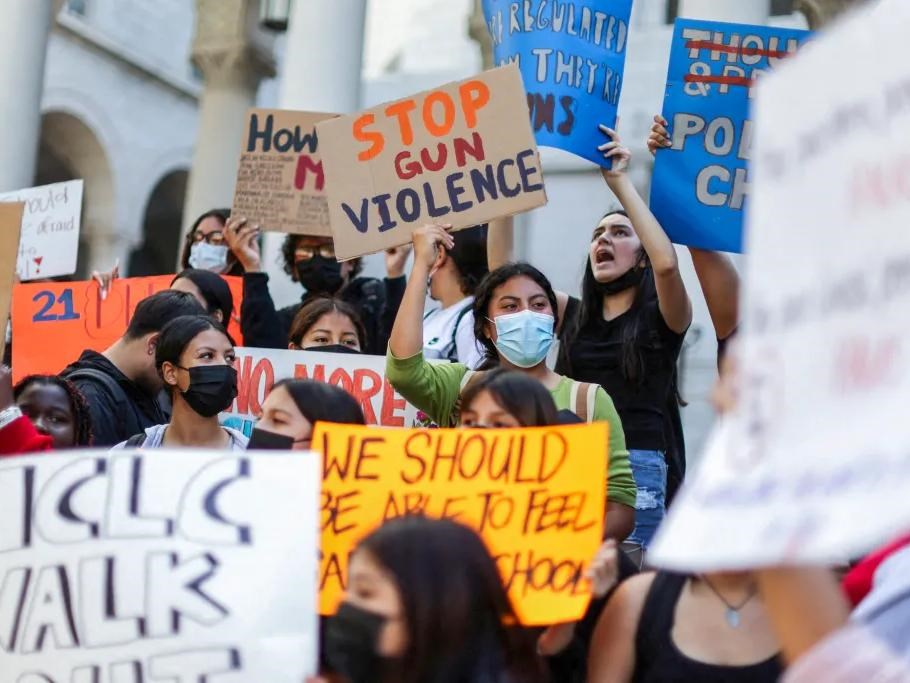 Students from Miguel Contreras Learning Center high school in Los Angeles demonstrate in front of City Hall after walking out of school to protest U.S. gun violence on May 31, 2022.Photo by Lucy Nicholson, Reuters

At the same time the nation’s highest court expands the scope of the Second Amendment, Congress is on the verge of adding a few modest extra guardrails. In response to the mass shooting in Uvalde, Texas, in which a gunman killed 19 children and two teachers with a semi-automatic rifle, the U.S. Senate reached agreement on a bipartisan gun bill on Wednesday over the objections of the National Rifle Association. The measure is headed to final Senate passage today.

If passed by the House of Representatives and signed by President Joe Biden, as is expected, it would ratchet up some background checks for younger would-be gun buyers. It would also provide funding to states interested in introducing “red-flag laws,” which make it easier for authorities to temporarily remove firearms from those deemed to be a threat to themselves or others.

Democratic lawmakers in California are also considering their own raft of new gun bills. That includes legislation that would open gun vendors and manufacturers to an array of lawsuits for violating state gun rules or marketing guns and ammunition to minors or others who aren’t allowed to own them.

“Next week, I will have 16 new gun safety bills on my desk, including a bill that will allow individuals to sue gun makers and distributors for violating certain gun laws. I look forward to signing all of those bills,” Newsom said in a press release.