California legislators want to help you buy a house with down payment, ‘shared equity’ 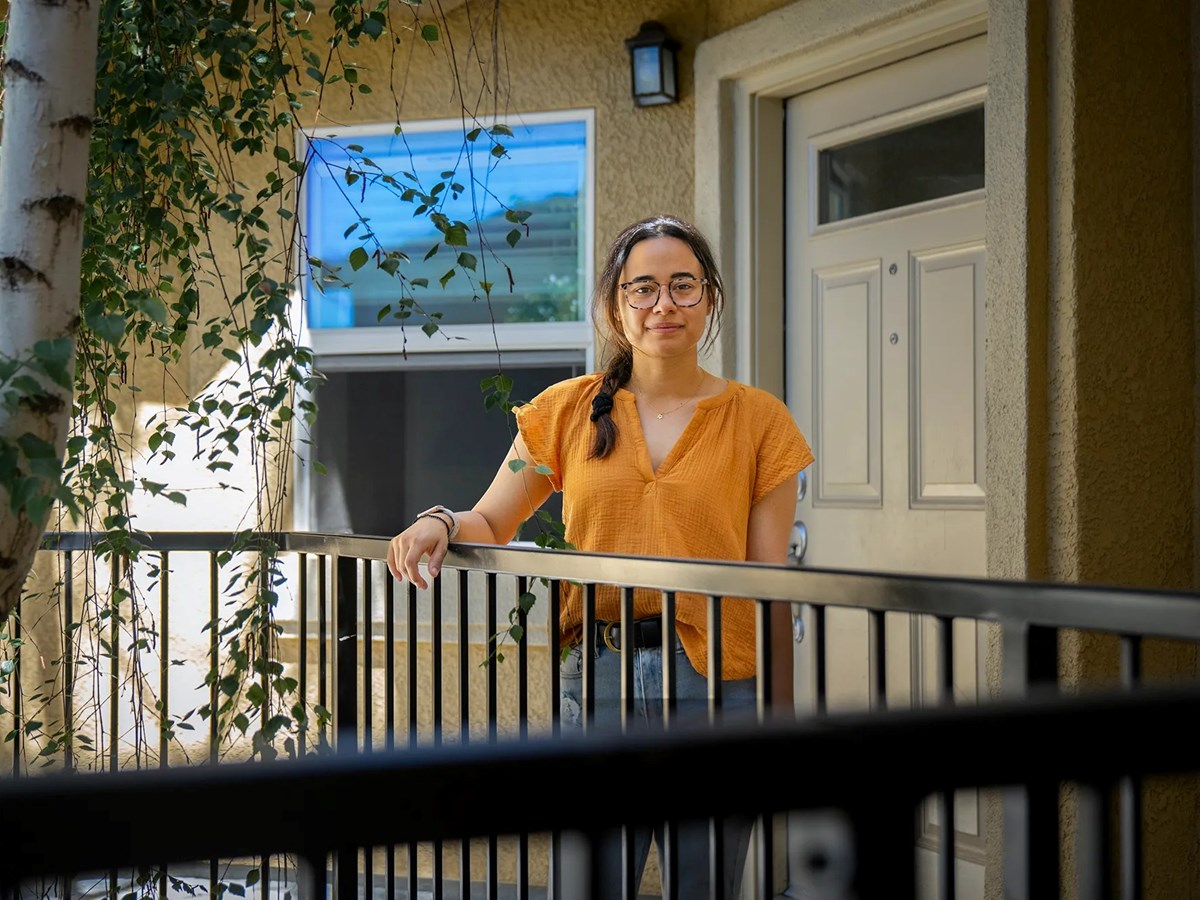 First-time buyers often rely on family gifts to afford the down payments on their homes. Now California Legislators want the government to fill the role of generous relative.

Lawmakers are proposing creating a billion-dollar fund in this year’s state budget that would provide California’s first-time buyers either all of the money they need for a down payment, or very close to it, in exchange for partial ownership stakes in those residences.

The proposal, put forward by state Senate President Pro Tem Toni Atkins, comes as skyrocketing property prices broaden the divide between those who own their homes and those who rent in California. In the past year, Golden State homeowners gained $141,000 in home equity, on average, the housing research firm CoreLogic reported last week, more than in any other state.

California’s rate of home ownership, at 56%, is second lowest in the country behind New York, according to the American Community Survey data from the census.

Atkins said the California Dream for All program is aimed at creating opportunities for lower- and middle-income buyers in a rapidly rising market, including those who have faced racial and economic barriers to homeownership.

“The California Dream for All program will give more people the chance to break free from the cycle of renting,” Atkins said last month. “This has the ability to change people’s lives.”

The proposal is the subject of negotiations between the Legislature’s Democratic supermajority and Gov. Gavin Newsom, also a Democrat, on how to spend a projected budget surplus of $97.5 billion. The legislature passed a budget on Monday that includes the proposal, though negotiations with Newsom continue on a final overall spending plan.

A spokesman for the governor declined to comment on the proposal, citing the ongoing negotiations. It was not included in the governor’s original budget nor in his May revised budget.

The housing proposal – which would call for issuing revenue bonds of $1 billion a year for 10 years to create the fund — is the largest in a slew of proposals intended to promote homeownership this year. The proposal also includes $50 million in the budget this year, and $150 million per year after that to pay for the administrative costs of the program and the interest costs of the revenue bonds. 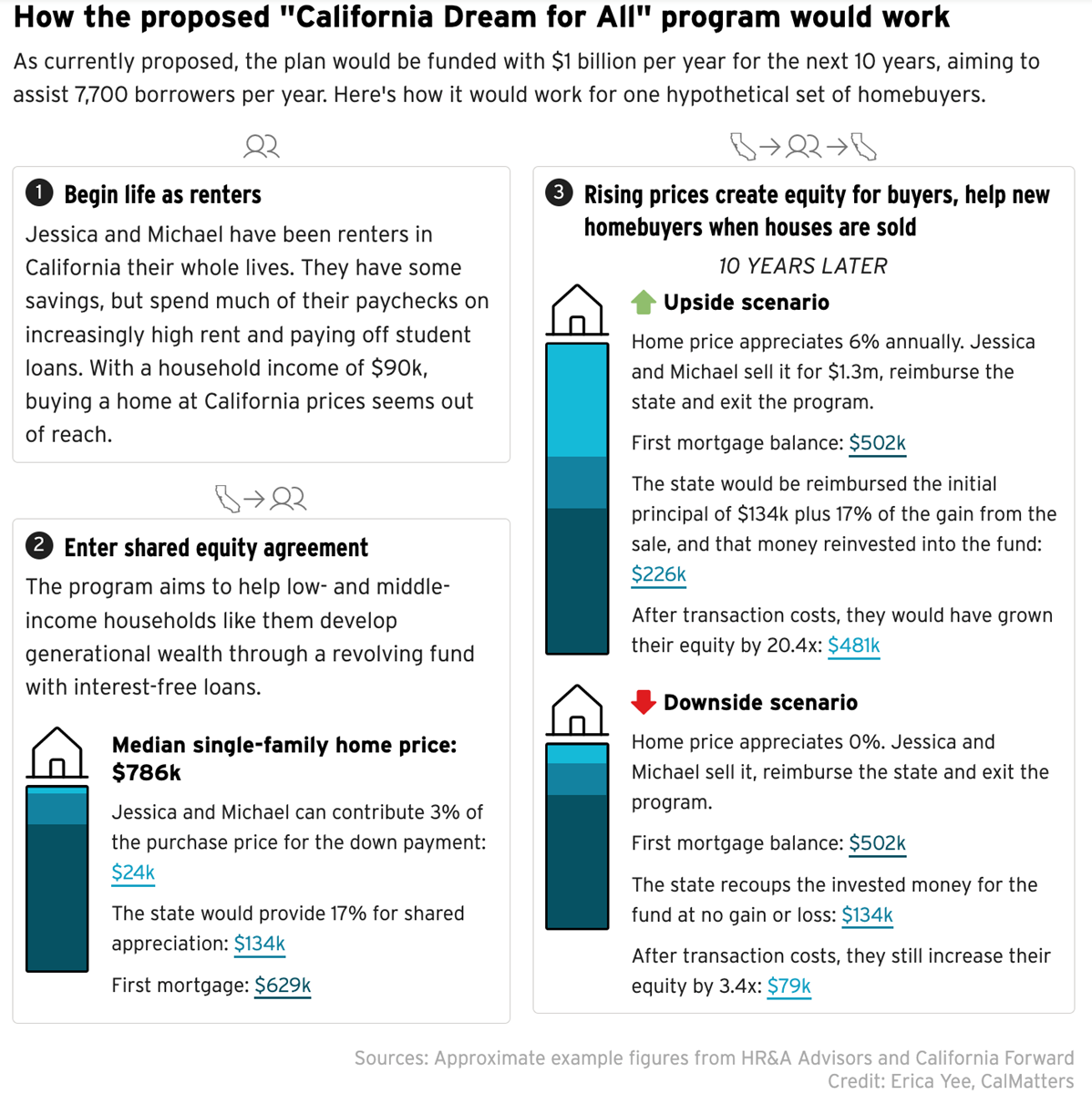 The program envisions helping some 7,700 borrowers a year, according to estimates made by the program’s designers based on home price projections. A start date for the proposed program has not been indicated.

If approved, the program would begin issuing interest-free second mortgage loans covering up to 30% of a home’s purchase price, though lawmakers expect many of the loans would cover 17%, asking borrowers to include 3% of their own money or pair the loan with other first-time buyer programs.

The interest-free loans would be paid back into a state fund whenever the home was sold, or if a bigger mortgage was acquired in a cash-out refinancing. For instance, if the fund provided 20% toward the purchase price of the home, the fund would get back its initial investment, as well as a 20% share of any increase in the home’s value.

The program would reinvest those proceeds, giving the fund the ability to make new loans for eligible participants, even if prices have risen significantly.

As long as home prices rise, the plan would create equity for people who otherwise would have remained renters. The program also would generate enough returns for the state to help future homebuyers.

If prices fall, homeowners might still gain some equity and the fund would absorb the losses, program planners said.

The program is intended to build as much flexibility as possible. Buyers who have lived in historically low-income neighborhoods can receive priority for some of the funds and can use shared appreciation loans to buy in their current neighborhoods or buy homes elsewhere.

“We need to make sure that the state’s homeownership assistance program serves people in all parts of the state, including in its high cost areas,” said Micah Weinberg, chief executive of the nonprofit group California Forward, which oversaw drafting the proposal.

“We cannot wait until more housing is built for these communities to begin to build the generational wealth that they were locked out of and deeply deserve,” he said during a recent legislative hearing.

The program would be open to buyers making less than 150% of the median income in their area, and it would target first-generation homebuyers as well as those with high student debt loads.

If approved, the program would significantly improve home affordability in California for the people awarded one of the loans, proponents say. If it had existed in 2021, for instance, it would have reduced the annual income needed to buy a median priced home of $786,000 by more than $30,000 to about $90,000, according to Kate Owens, a principal at HR&A Advisors, Inc., one of the economic consulting firms hired to devise the program.

The program is distinct from other down payment assistance programs in that most offer much smaller payments, often around 3% to 5% of the purchase price, in the form of grants or loans.

The proposed state fund allows homeowners to not put down a down payment, eliminating the need to save for that initial investment, which Atkins said is the biggest hurdle for many buyers in today’s market.

These equity sharing arrangements often are referred to as shared appreciation mortgages. The California plan would be the largest attempted experiment with such home loans ever created in the U.S., designers of the program said.

Over a 40-year period the program could assist some 157,000 families with interest-free loans, said Gene Slater, chairman of CSG Advisors, another consultancy hired to design the program.

Lawmakers said they are trying to do more to support homeownership, especially now that the pandemic has spurred demand for single-family properties as remote workers seek more space, and as communities throughout the state are falling woefully short of homebuilding goals.

“Until California truly prioritizes affordable homeownership, a generation of Californians will be effectively barred from one of the most reliable forms of wealth generation available — owning a home,” said Assemblymember Tim Grayson, a Democrat from Concord, in April.

California’s home price increases mean affordability has plummeted, even more so for Black and Latino families. Only 26% of California households overall earned the minimum annual income needed to buy a median-priced, single-family home last year. Just 17% of Black and Latino households could afford such a property, according to a report by the California Association of Realtors, which supports the creation of the down payment fund.

“Homeownership provides working families with the unparalleled ability to accrue generational wealth and experience financial stability through a fixed mortgage versus rising rents,” said the California Homeownership Coalition, a group that includes the Realtors, the California Building Industry Association and Habitat for Humanity.

Richard Green, director of the University of Southern California’s Lusk Center for Real Estate, put forward a competing research proposal that was not selected by the state. He supports the goals of the one under consideration but is concerned about how complicated it is.

“There are lots of things in life where the policy idea is great (but) executing it is hard,” he said, adding that while the program would only be a fraction of the state’s massive housing market, it could contribute to rising prices if it got bigger. “If this program scales it would almost certainly have at least some impact.”

Andrew Caplin, a professor at New York University who wrote a book on shared equity programs, said he is eager to see the concept take off, but he has largely promoted the idea for private investors, not governments.

Caplin did not study the California plan, but he said he would be concerned that politicians might feel pressured to not demand repayment and “in the end, it will all be agreed that we can’t really collect the money — like student loans.”

Had it been in existence, the program could have helped a homebuyer such as Aralyn Tucker, 29, who moved to Sacramento in 2017 because she was priced out of the housing market of her hometown of San Jose.

Tucker, who has a master’s degree in public policy and administration from Sacramento State University, works in human resources at a private school. She was only able to afford a two-bedroom condominium in Sacramento after her parents contributed most of the down payment as a gift.

Buying a home was important, she said, because her family had moved at least four times before she turned 18, at times into unstable housing situations.

“Creating that generational wealth and creating that security has been really important to my parents,” she said.

Down payment help was critical, because her mortgage payment is only $200 more than rent, she said, but she couldn’t save for the down payment on her own.

“Folks in my generation, we have so many extra expenses that we’re not able to set that  cash aside as a down payment,” she said.

“Here I am making enough money to afford $2,200 in rent each month that I paid on time every month, and yet, I wouldn’t qualify for a mortgage because I don’t have the down payment,” she said. “We’re constantly behind and we’re paying into a system that doesn’t give anything back to us regarding equity. I’m paying someone else’s mortgage.”

This article is part of the California Divide project, a collaboration among newsrooms examining income inequality and economic survival in California.