Inflation soars to an over 40-year high. These are the ways Americans are coping 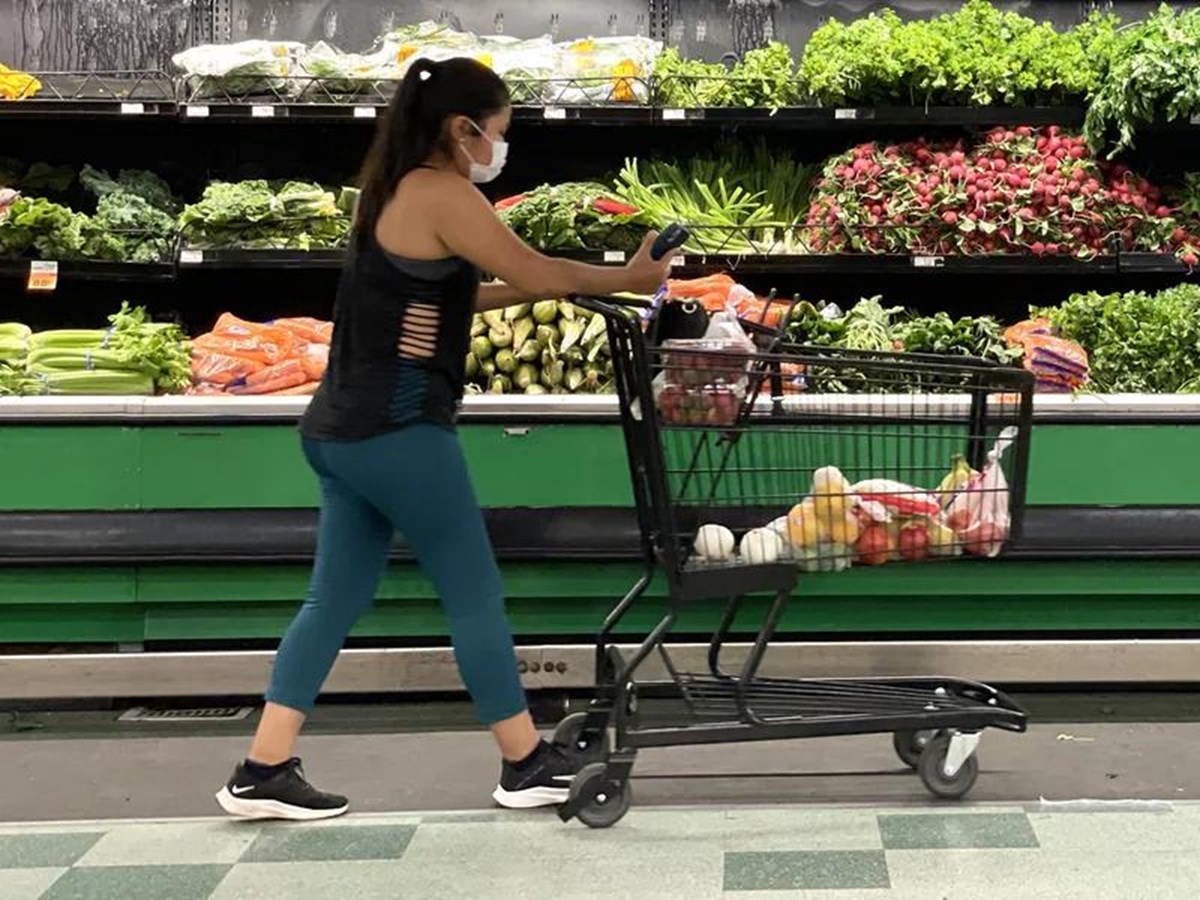 A customer shops at a grocery store in San Rafael, Calif., on June 8. Inflation has surged to its highest rate in nearly 40 years, and Americans are having to adjust some of their spending patterns.

So the suburban Chicago school teacher was excited when he spotted it on sale at his local grocery store: two packages for $8.

"I went to grab the package and I was like, 'Wait a second,'" Watkins recalls.

He was surprised to find a package that once held 12 cans of sparkling water had been downsized to 8 — with no change in price — a common practice known as "shrinkflation."

(Actually, it's even worse. The package is 33% smaller, but the remaining cans are 50% more expensive.)

Frustrated, Watkins put the LaCroix water back and fired off a tweet. Later, he bought store-brand sparkling water at Trader Joe's for 79 cents a liter.

Hey @lacroixwater what gives? Three weeks ago a 12 pack went for $4.99… did you think I wouldn’t notice? #repackage #groceryprices pic.twitter.com/Y2N2Lnxd46

Many people are facing much more painful decisions as inflation reaches a four-decade high.

The Labor Department said Friday that consumer prices in May were 8.6% higher than a year ago — the largest increase since December of 1981. Prices rose 1% between April and May, led by jumps in the price of gasoline, groceries and rent.

Shoppers who swallowed price increases for much of the pandemic without batting an eye are starting to blink now that gasoline prices have topped $5 a gallon in much of the country and grocery prices continue to climb at a rapid rate.

Cutting back — except for a beloved pet

Davey says since that Russia's invasion of Ukraine pushed gasoline prices through the roof even middle-income consumers have begun pushing back against price hikes. They're increasingly turning to discount stores and opting for cheaper generic products. 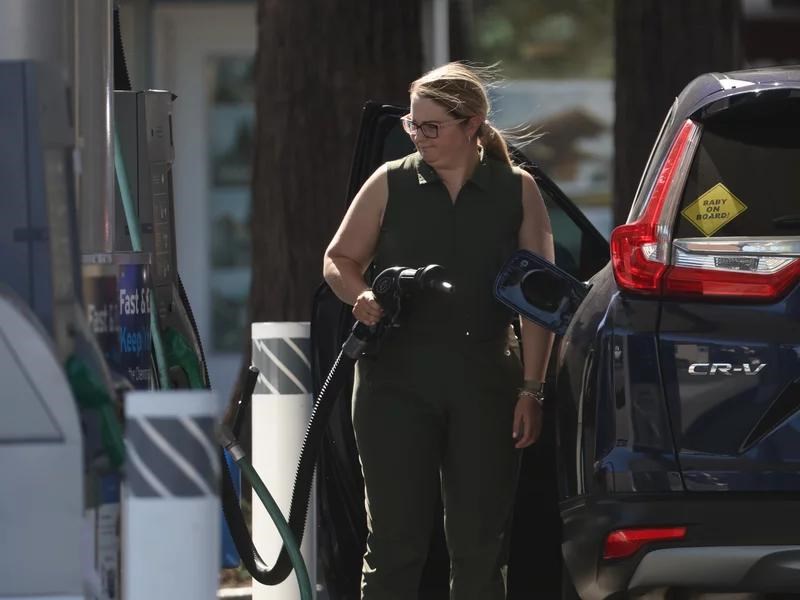 A customer prepares to pump gas into her car at a gas station in San Rafael, Calif., on May 20. Surging gas prices have been a major pain point for many household budgets.Justin Sullivan/Getty Images

Joanne Lee buys regular eggs now, not the more-expensive, free-range kind she prefers. She's traded down on her salad toppings as well.

"There's a certain crouton that I like. But that is like $1.50 more than the generic Kroger brand, so I've switched over," Lee says. "They're not bad. But they're not the quality that I usually like."

Lee, who lives in West Lafayette, Ind., does not cut corners, though, when it comes to her dog, Potato. The golden doodle still gets name brand pet food.

"She'd still spoiled," Lee says with a laugh. "She eats the most expensive food out of all of us."

Still, many are willing to splurge for meals and travel

Davey says it's not unusual for shoppers to scrimp on some items while splurging on others. They might try to stretch a tube of toothpaste or a bottle of ketchup longer, but when products like toilet paper or baby formula are in short supply, price is no object.

While consumers may be watching their pennies at the gas station and grocery store, they're still opening their wallets for pricey restaurant meals, airline tickets and hotel rooms. Overall consumer spending has grown faster than inflation every month this year.

When it comes to travel and entertainment, many people are making up for lost time.

"For this summer, there is a mindset of, 'We're going on vacation and we're not putting it off,'" says economist Tim Quinlan of Wells Fargo. "While consumers aren't happy about prices, they're sort of willing to pay it to have those experiences for a while."

The spending can't last forever, though

But with inflation outpacing income, many people are having to dip into savings to finance that spending, or put it on the credit card. The personal savings rate dipped to a 14-year low in April, while revolving credit grew at an annual rate of nearly 20%.

Quinlan says that can keep spending afloat for a few months, but not indefinitely.

"Come Labor Day, when all these credit card bills come due, everybody will be back on a budget again. And that's why we expect growth to slow as we head into the end of the year." 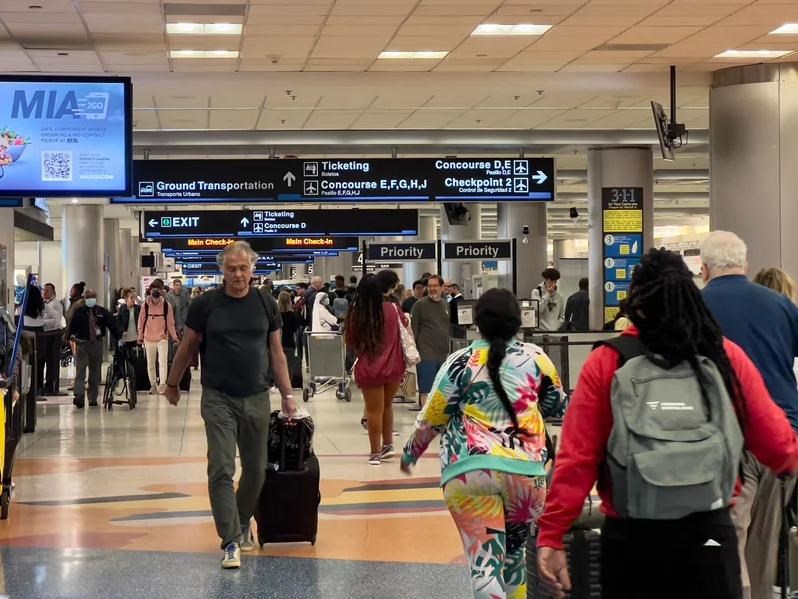 Travelers transit through Miami International Airport in Miami on April 22. Although many Americans are cutting down spending on some stuff, they continue to splurge on travel and eating out. Daniel Slim/AFP via Getty Images

Ultimately, Quinlan says, it will likely take a slowdown in consumer spending to bring prices back under control.

The Federal Reserve is working to accelerate that by raising interest rates and making it more expensive for people to borrow money.

The Fed's actions may help bring down inflation, but some worry they could trigger a recession.

And Watkins, the teacher who switched to cheaper sparkling water when LaCroix got too expensive, knows not everyone can adjust his spending so easily.

Watkins volunteers at a Chicago-area food pantry where he's seen a huge spike in traffic over the last six months.

"The people who are really being hurt by gas prices and food prices are the people who don't have a lot of margin," he says. "They don't know where to cut."

So long as prices keep climbing, more people may have to make difficult choices about what they can live without.