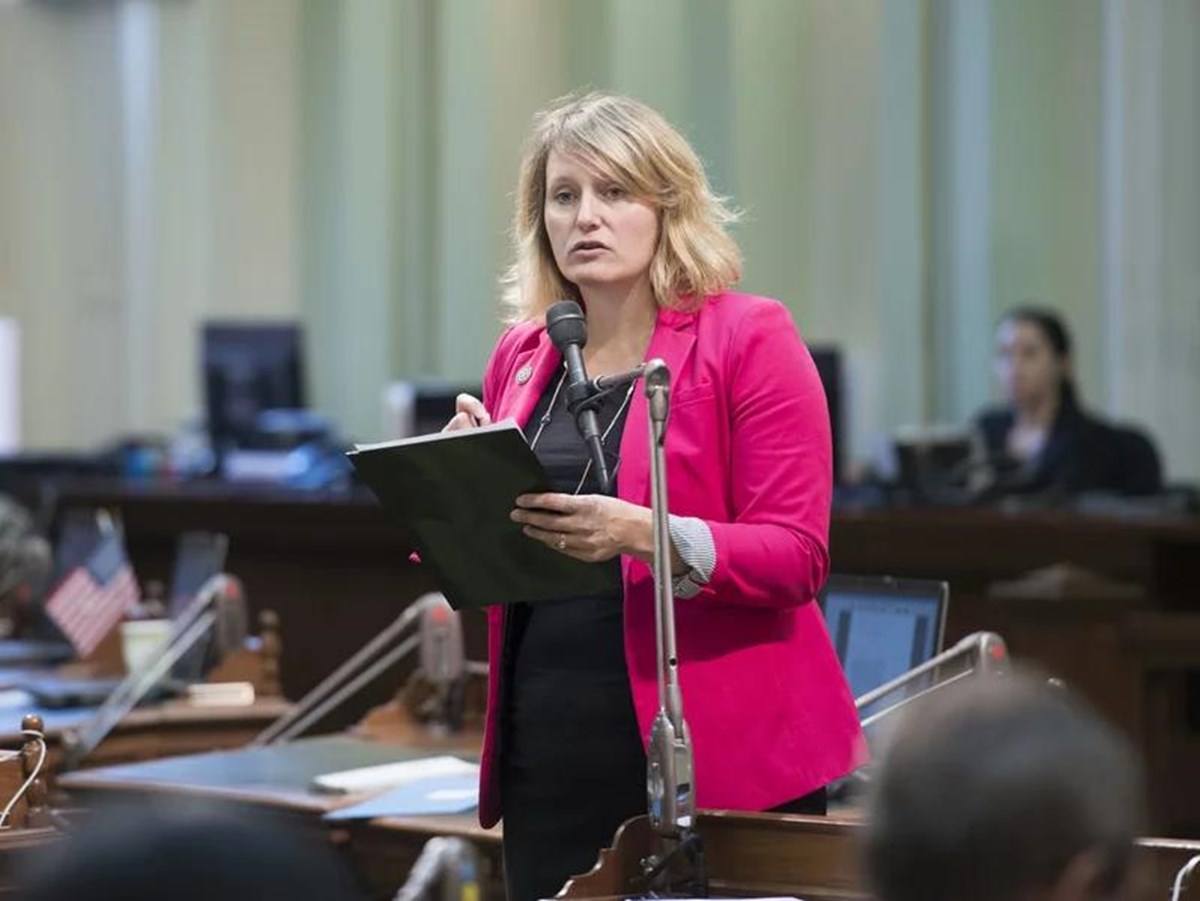 California Assembly member Buffy Wicks, a Democrat, speaks on the chamber floor in January 2020. In 2019, on the 46th anniversary of Roe v. Wade, she told the story of her own abortion.

While 26 states in the U.S. are likely to ban or restrict abortion care if the Supreme Court overturns Roe v. Wade, California is positioning itself to be a sanctuary for abortion access, preparing to welcome and support people from around the country who are seeking that care.

The state's Democratic-led legislature is considering a package of 13 bills designed to ease access to abortion and reduce the costs. It includes proposals to protect people from law enforcement action if they have an abortion or help provide one. Gov. Gavin Newsom has pledged $125 million in state funds to back these efforts.

"The goal is to really enshrine and ensure that California is a reproductive freedom state for all," says state Assembly member Buffy Wicks, a Democrat who represents part of Oakland.

Back in 2019, on the 46th anniversary of Roe, Wicks became the first lawmaker to tell her abortion story on the floor of the California assembly.

"I was 26 years old, in between jobs and in between homes," she said in the 2019 speech. "Staying on a friend's couch, unemployed. And facing an unplanned pregnancy was a vulnerable time in my life."

She got help at a Planned Parenthood clinic in San Francisco in 2004. In the next few years, Wicks went on to work for Barack Obama, first on the 2008 campaign trail, then in the White House. In 2018 he endorsed her run for office and she won her seat in California's legislature. Now she's 44, married, and has two young daughters.

"For me, having an abortion was an empowering decision," she says, "one that I have never regretted."

And Wicks has continued to share personal experiences with reproductive health care, and explain how they inspire her legislative work. In December, just after the Supreme Court heard arguments in the case that could overturn Roe, she tweeted about one of those experiences. It was September and she was preparing lunch at home, chopping lettuce, carrots, and avocado at the kitchen counter, when she felt a sudden wave of severe cramping in her abdomen. Then she started bleeding – a lot. She rushed to her doctor.

"Turns out, I was pregnant and having a miscarriage," Wicks says. The physician told her, 'We need to do an emergency abortion procedure, a D and C,' referring to the medical procedure that is used both for abortion and to manage complications of miscarriage.

This was happening right after Texas passed a law banning abortions after about 6 weeks of pregnancy, and allowing any member of the public to sue physicians who performed them. Wicks asked her doctor if she would have been able to get the procedure she'd just received if she lived in Texas. The doctor told her that, legally, it would have been permitted because the pregnancy wasn't viable. But in reality, the chilling effect of the Texas law was making some doctors too frightened to perform these procedures at all.

Wicks says she asked herself what she would have done if she lived in Texas and couldn't get the D and C. Stay home and deal with the potential health complications? Get in a car and drive 10 hours to find care?

"I mean, I was doubled over in pain," Wicks says. "And so that compels me to make sure, as a legislator, that I'm doing everything I can to bring voice to the situation."

If Roe is overturned, the number of women whose nearest provider of abortion services would be California would increase almost 3,000 percent, from roughly 46,000 to 1.4 million women, according to a report from the Guttmacher Institute. Wicks is part of a coalition of lawmakers and reproductive health groups pushing for the 13-bill package that would expand services in California, in anticipation of a spike in demand.

One additional bill that's already been signed into law will eliminate insurance co-pays for abortion. Other bills moving through the legislature would set aside state money to help women who are traveling from out of state pay for their lodging, travel, and child care costs. Another bill would help reproductive health clinics offer more abortions by adding appointment slots and training more staff.

Several bills are focused on legal protections, to counteract the potential threat of laws like the one in Texas, which allows members of the public to file lawsuits against anyone who "performs or induces" an abortion after the legal cutoff, or "aids or abets" those abortions. It's unclear if those lawsuits could reach across state lines, but such lawsuits could potentially implicate medical staff or even Uber drivers who drive women to an appointment.

The bills under consideration in California would make it clear that state and local officials will refuse to help with any kind of lawsuit like that, by not complying with subpoenas from other states and by declining to turn over health data requested by other states. One bill authored by Wicks formally states that no one in California can be prosecuted or incarcerated for terminating a pregnancy or experiencing a pregnancy loss.

As these legislative efforts proceed, health clinics across California have begun privately preparing for the possibility of increased protestors or even security threats, according to Lisa Matsubara, general counsel and vice president of policy for Planned Parenthood Affiliates of California, which sponsored several of the bills.

"We're definitely worried about the change in focus for anti-abortion activists, as they have effectively eliminated access in many states," she says. In other words, protestors will migrate along with patients, targeting states like California where abortion is still legal.

Some protestors have already traveled to California. A trucker convoy from Canada came to the Bay Area on April 22: a stream of semis and pick-up trucks sporting American flags wound its way through Buffy Wicks' neighborhood in Oakland, then parked outside her house for hours to protest her support of abortion legislation. 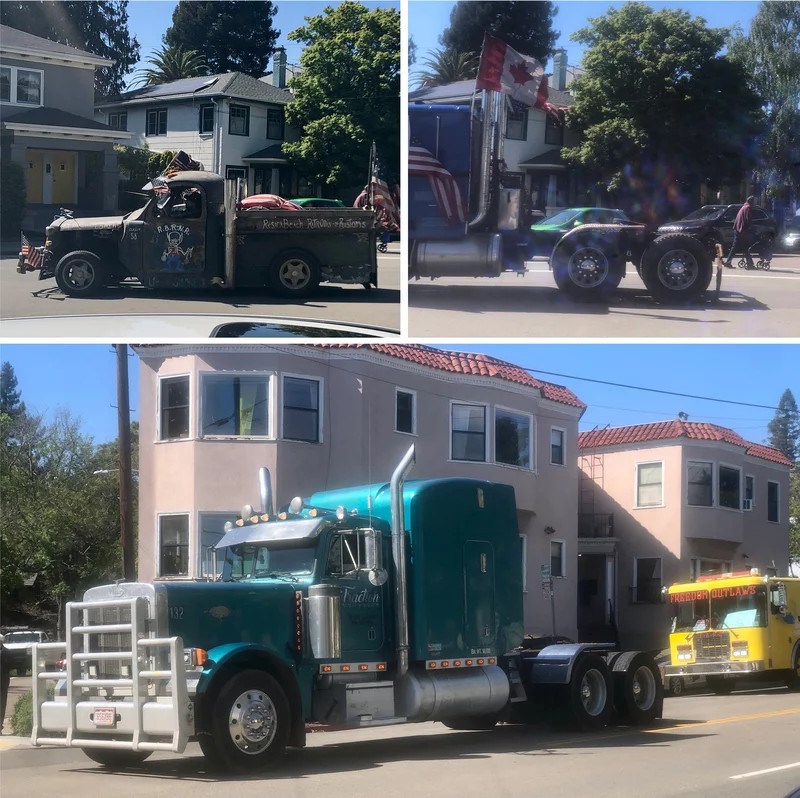 On April 22, this convoy of trucks parked outside the Oakland home of state Assemblymember Buffy Wicks (D-Oakland), to protest her support of new bills that would increase funding and legal protections for abortion services.Alex Momtchiloff

"This is a direct assault on humanity," one man shouted through a bullhorn.

Wicks' neighbors did not welcome the convoy. A woman with long neon yellow nails gave them the double finger. Others pelted the trucks with eggs and chanted "Go home, go home, go home." Nearly 80 percent of Californians believe Roe v. Wade should not be overturned.

Police eventually closed the street to through traffic and stood guard in front of Wicks' house for the remainder of the demonstration.

Buffy Wicks was home, and she watched the protestors from a window. She says she's not intimidated and she won't change her agenda. In fact, she and her colleagues are looking for ways to speed up the legislative work of making California an abortion sanctuary for all.

"It's out of necessity that we're preparing for this, not necessarily out of desire," she says. "We want to make sure that we are a place where people can come in their biggest moments of need and get the care that they need."