Wildfires are causing billions in damage every year and yet many homebuyers have little idea whether their house is at risk.

For more than 50 years, anyone buying or renting a house could look up how vulnerable it is to flooding. But for wildfire risk, homeowners were mostly in the dark.

Even with thousands of homes destroyed by wildfires every year, most people who move receive little or no information about the risk they're taking on.

Now, a non-profit research group is releasing a first-of-its-kind tool for homeowners. Produced by First Street Foundation, the ratings tool shows the wildfire risk for properties across the lower 48 states, and shows how that risk will change as the climate gets hotter. The information will be shown on Realtor.com, expanding to other real estate sites later.

The information fills a gap left by government. Only a handful of states have mapped where communities are most at risk to wildfire. Federal maps from the U.S. Forest Service aren't meant to be used for individual properties.

Knowing about wildfire risk may not necessarily dissuade buyers, especially where housing is in short supply. But wildfire experts say that there are many steps homeowners can still take to make their homes safer, like trimming back flammable vegetation and using fire-resistant building materials.

"We're not going to be able to stop all wildfires," says Kelly Pohl, associate director of Headwaters Economics, a land use think tank. "We have a lot of work to do and understanding where a hazard is, across the landscape and to individual homes, is the first step."

In a bidding war, it's easy to forget

In 1991, Tom Grossman got a tough assignment. The Oakland hills firestorm hit the Bay Area, destroying more than 3,000 homes. Grossman's search and rescue team was called in to systematically comb through the area, looking for human remains.

In the rubble, his team found people who didn't make it. Twenty-five people died in the fire, many as they were trying to escape down narrow, winding roads. 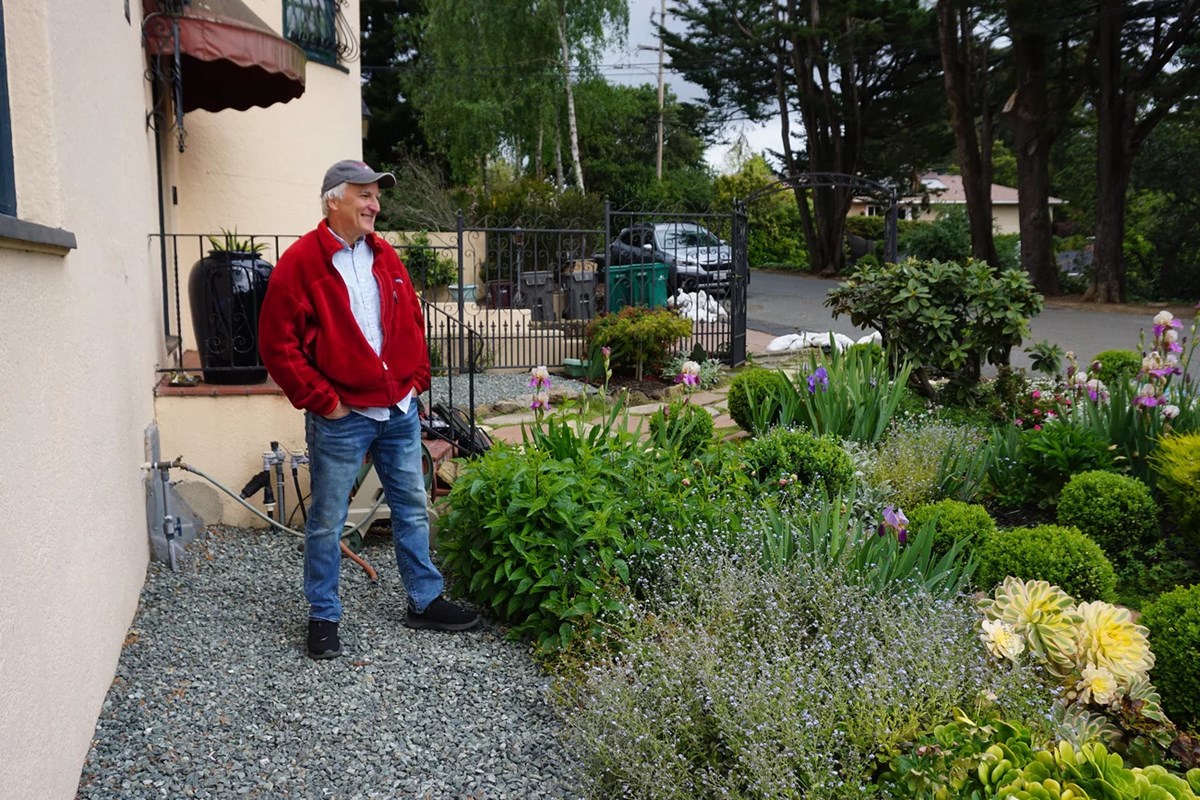 Tom Grossman didn't think about wildfire risk when he bought his Oakland, Calif., home. Since then, he's torn out flammable brush and replaced the wood mulch with gravel to make his house more fire-resistant. Lauren Sommer/NPR

More than two decades later, Grossman was on the hunt for a new home in the Oakland Hills, navigating the Bay Area's hyper-competitive housing market. After bidding on several and losing out, he and his spouse finally closed on a house. It sits on a tree-covered hillside, just a few miles from where the Oakland fire burned. But that didn't cross Grossman's mind.

"We totally didn't make that connection," he says. "We were just going: another freaking bidding war!"

Like many other homeowners and renters around the country, Grossman received little information about the dangers of wildfires in the process of deciding where to move. California is one of the few states requiring that wildfire risk be disclosed during a home sale, but the one-page form is easily overlooked in the piles of papers that home buyers have to review.

First Street Foundation set out to map wildfire risk after releasing similar home ratings for flooding, which currently appear on Redfin and Realtor.com. The wildfire ratings, ranked one through 10, take climate change into account, which is fueling the extreme heat and dry conditions that have helped create record-breaking wildfires.

"The results are going to be surprising for some folks to say the least," says Matthew Eby, executive director of First Street Foundation. "What we see is that in some areas that risk will double, triple, quadruple. And in areas that really have high levels of risk already, like California, we see almost a 50% increase."

More than 30 million homes in the lower 48 states – some 20% of houses – have a measurable risk of being hit with a wildfire. Some 1.5 million properties have a greater than 26% chance of burning over the next 30 years.

Eby says even a small risk of wildfire adds up over the life of a 30-year mortgage, but that cumulative probability is difficult to grasp. Most disasters are framed by their annual risk, like a 1-in-100 year storm.

To do the analysis, First Street ran complex computer models, simulating how wildfire spreads across different landscapes. Then, to determine how vulnerable each house is, they used satellite imagery and created computer algorithms to assess how much vegetation surrounds a home and what the roof material is, based on its color.

While wildfire risk maps can fill an informational void, experts warn that maps are imperfect. Homeowners living just outside risky areas on a map may feel a false sense of security. And wildfire maps are most accurate when communities can fill in details about local conditions. Wildfire experts also warn that the computer models that simulate wildfire spread are also in need of an update, given the complex dynamics of weather and fire.

For fifty years, city planners and homeowners have had a clearer view of the dangers posed by floods. In 1968, after a series of destructive hurricanes, Congress created a landmark program that has shaped cities ever since. The National Flood Insurance Program provided insurance to properties at risk, and as part of that, FEMA released maps showing where floods were likely to happen.

"For many communities across the nation, it's the primary resource they have to understand what areas are prone to flood hazards," says David Bascom, who leads FEMA's Engineering Resources Branch. "In many instances, it's the only tool that they have to make decisions with." 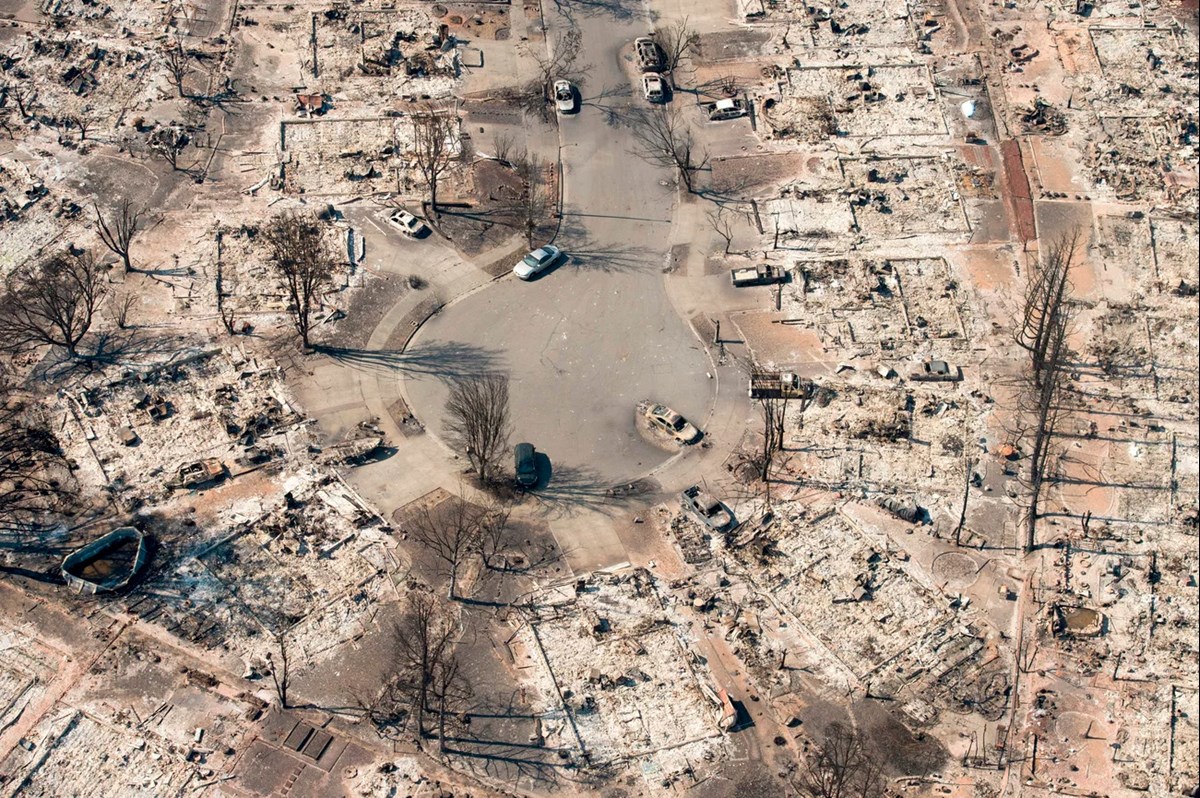 As wildfires increasingly burn into urban areas, like in Santa Rosa, Calif., in 2017, homeowners and renters are losing homes that they had little idea were in danger.Josh Edelson/AFP via Getty Images

But even as wildfires have taken an increasing toll across the country, few states or communities have mapped their wildfire risk. California created maps in 2007, but they're now considered out of date, and state fire officials are working on a long-awaited update. Oregon is in the process of creating its first comprehensive statewide maps.

For states that have maps, the risk zones are a foundational tool in helping communities prepare for wildfire. In California, they determine whether new homes must be constructed to meet wildfire building codes, which require fire-resistant building materials that reduce the chances a home will ignite. Many cities and counties receive state and federal grants based on their wildfire risk rating.

In 2018, Congress mandated that the U.S. Forest Service create nationwide wildfire maps. The result, Wildfire Risk to Communities, shows how cities and neighborhoods are vulnerable to wildfire, but isn't detailed enough to be used for individual properties and homes.

"Because it's a broad, national mapping project where we don't have property level data on how susceptible each person's home is –what the siding material, roofing material is, et cetera – we take a very coarse look at that," says Greg Dillion, director of the Fire Modeling Institute with the U.S. Forest Service.

While seeing that a home has a substantial chance of burning may dissuade some buyers or renters, others may have to overlook it in favor of finding somewhere to live. Millions of houses are already built in wildfire-prone areas, not just in the Western U.S., and a national housing shortage often leaves people with few options.

"We already live in these places that have a lot of risk, so we need to think about how we can become better fire-adapted and build our homes and communities safer," Pohl says. 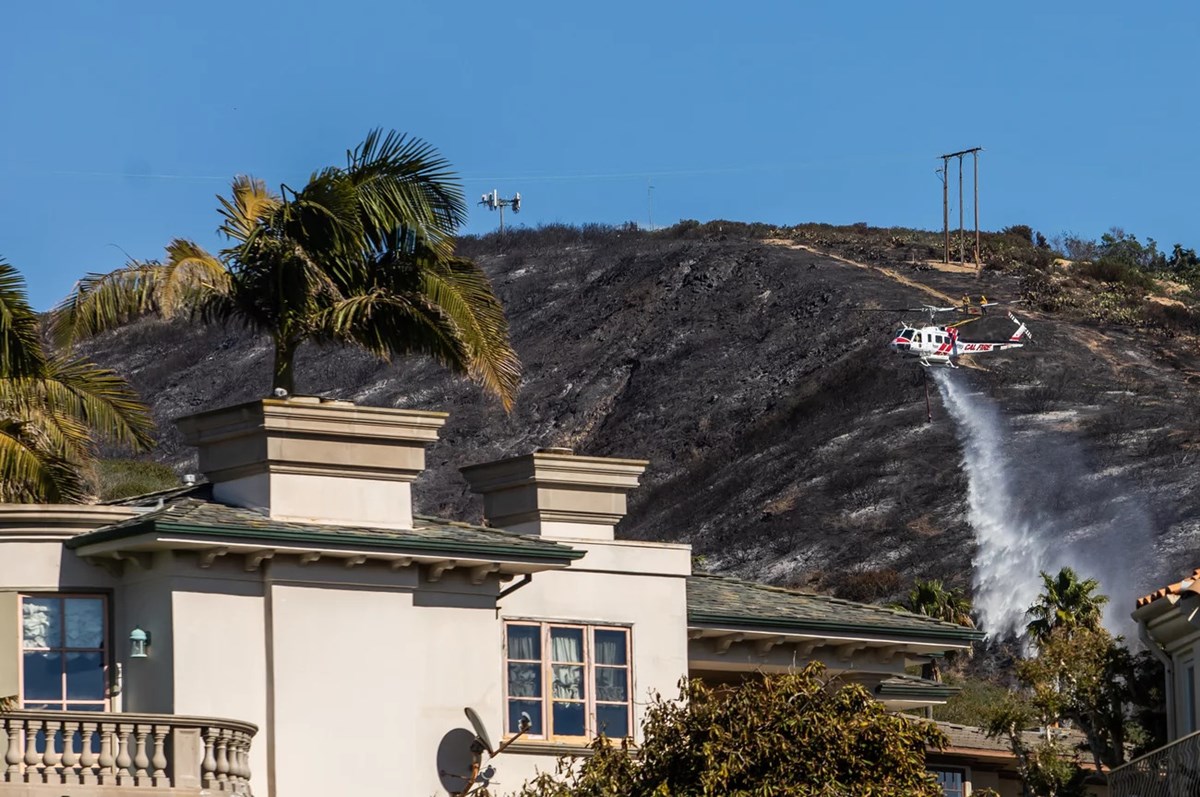 A helicopter drops water near evacuated homes in Laguna Beach, Calif. New homes in high risk zones in the state must use fire-resistant materials in construction.Apu Gomes/Getty Images

Simply knowing that wildfire is a risk can still help homeowners. Many houses are ignited by embers that can be blown far ahead of actual fire. Studies show that even affordable home projects can improve the chances that a home survives.

In the Oakland hills, Grossman has been doing just that. He worked with his neighbors to clear overgrown vegetation on an empty lot nearby. At his own home, he cut down a large hedge of cypress and replaced the wood mulch with gravel within five feet of his house. Now, he's turning his attention to making sure evacuation routes are also clear, so they're not overwhelmed with flames before people can get out.

"We need to find a way collectively to shift away from a mindset of 'me, me, me' to a mindset of 'we're in this together," Grossman says. "Let's partner and help each other."