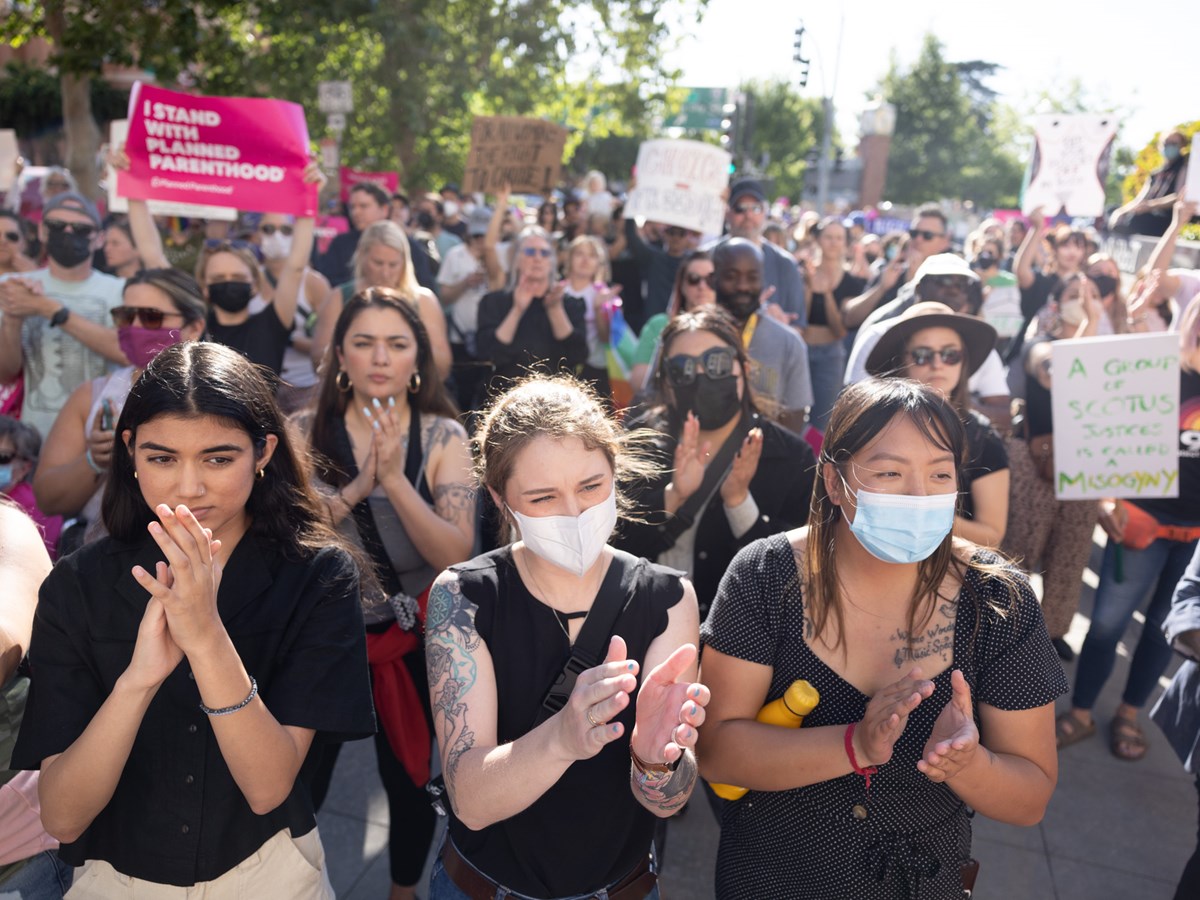 Demonstrators gather at the Federal Courthouse in Sacramento Tuesday, May 3, 2022, in response to the leaked SCOTUS decision to overturn Roe v. Wade.

California’s elected leaders were quick to condemn a draft opinion showing the U.S. Supreme Court plans to vote to overturn Roe v. Wade and pledged to double down on efforts to protect the right to get an abortion in the state.

Senate President pro Tempore Toni Atkins (D—San Diego) announced she will introduce a constitutional amendment “that will make it crystal clear that reproductive rights in California — including and specifically abortion — are enshrined in our constitution.

“We will not back down, we will double down,” she said.

“California will not stand idly by as women across America are stripped of their rights and the progress so many have fought for gets erased,” the three wrote in a joint statement Monday night. “We will fight.”

The draft opinion by Justice Samuel Alito was published late Monday by Politico and confirmed as authentic by the court on Tuesday. It states that “Roe and Casey” — a 1992 decision that upheld the original 1973 ruling ​​that legalized abortion nationwide — “must be overturned” and abortion laws decided by individual states.

Newsom slammed the draft opinion as “an appalling attack on the rights of women across this country” and warned that the right-leaning court could chip away at other civil protections. He said he would “fight like hell” to ensure California maintains and expands the right and access to reproductive health care. 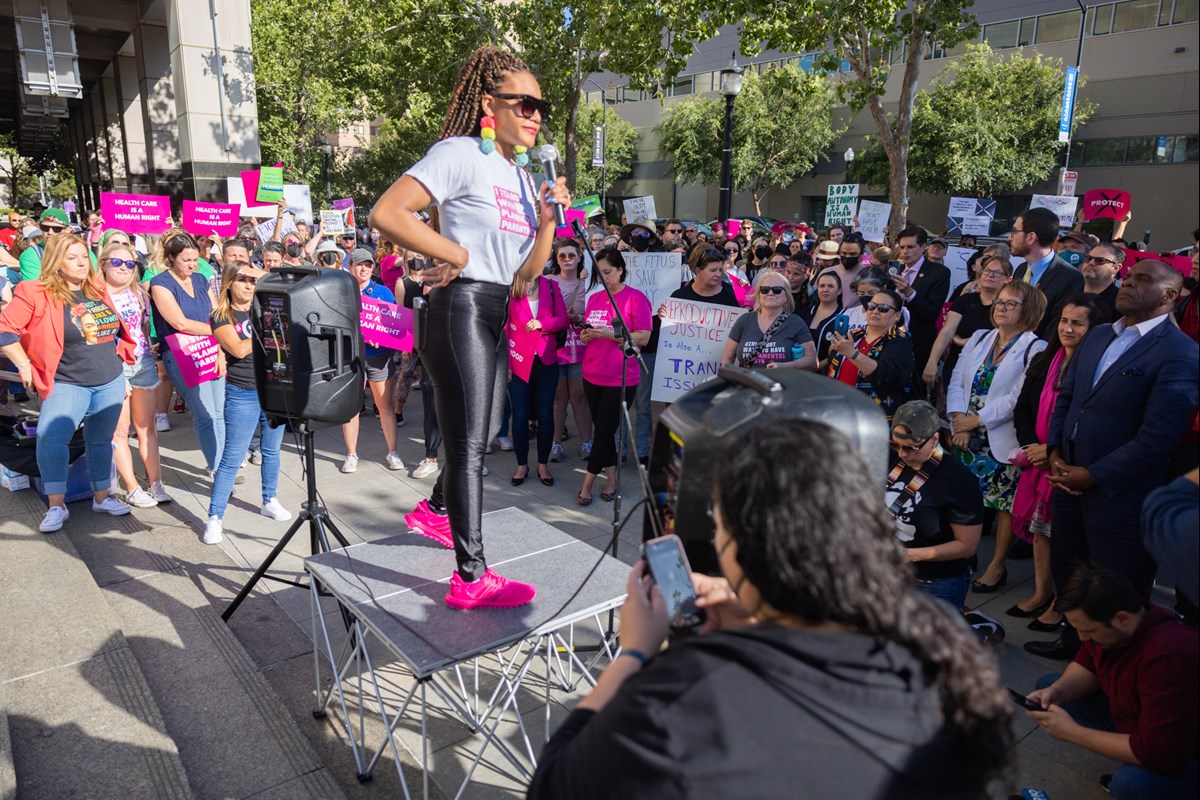 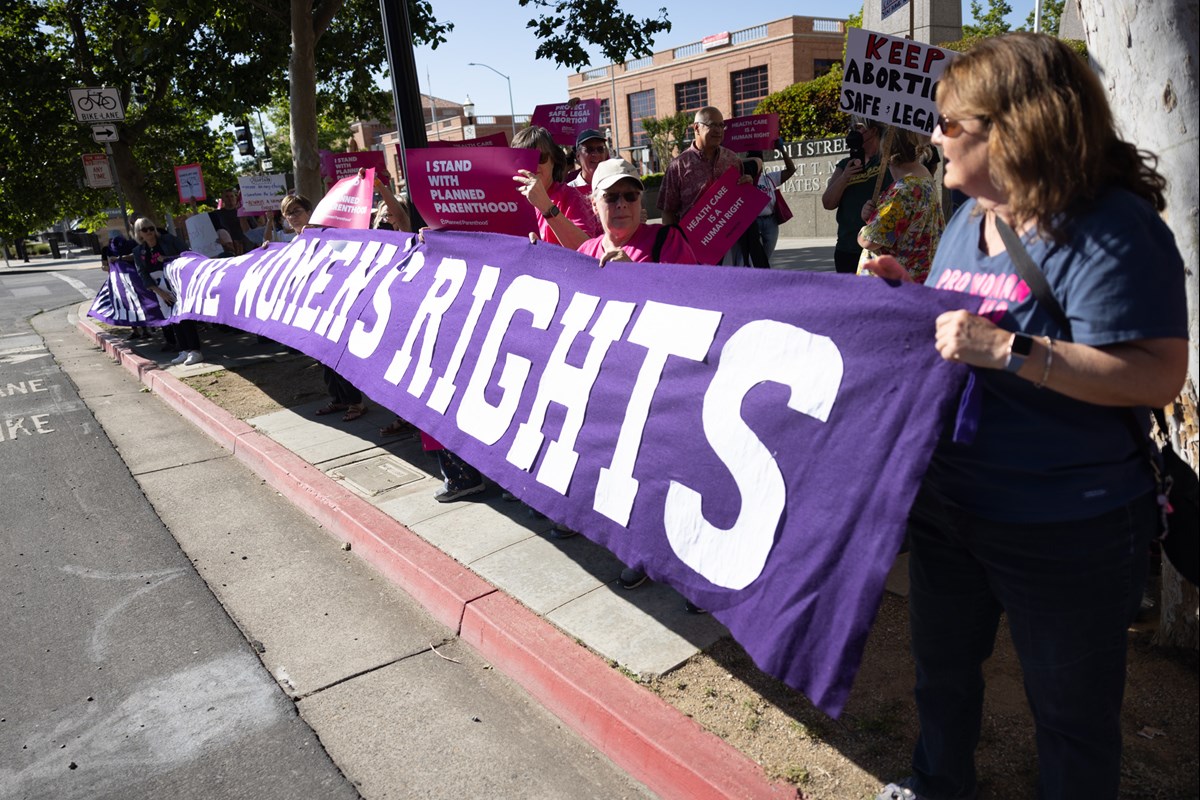 Demonstrators gather at the Federal Courthouse in Sacramento Tuesday, May 3, 2022, in response to the leaked SCOTUS decision to overturn Roe v. Wade.Andrew Nixon / CapRadio

People across the country demonstrated against the possible decision, including in Sacramento where dozens stood in front of the U.S. Courthouse and Federal Building in downtown chanting and holding signs supporting reproductive rights.

"I think it's important for me to be here because I am utterly heartbroken and horrified that we are going backwards on abortion rights, on women's health rights, on the entire notions of freedoms for people," she said. "It's encouraging to see that there is a movement forming to win back our rights.

"I think that a lot of times it gets lost in the bigger issue of women's rights," she said. "And when we are talking about trans people, we may be talking about men who have reproductive organs that could be affected by this, who need care just as well as women do."

While California is not likely to restrict access to abortion any time soon, Atkins said the constitutional amendment “will add another layer of protection” in case of future legal attacks.

Constitutional amendments must be approved by California voters. To put it on the November ballot, lawmakers must approve the language by a two-thirds vote in each chamber before the end of June.

Jodi Hicks, president and CEO of Planned Parenthood Affiliates of California, applauded the proposed amendment and other efforts to expand access to reproductive health care in California.

“I could not be more devastated for the people in other states that are going to be facing what they’re going to be experiencing,” she said at a press conference Tuesday.

“We’re talking about people that have never traveled out of the state that they live in now, and now they have to navigate how to travel, navigate a public health system that is hostile to their needs at a time when they’re most vulnerable.”

More than three-quarters of California adults do not want to see Roe v. Wade overturned, according to a July 2021 survey from the Public Policy Institute of California.

After Texas enacted a near-total abortion ban last year, Hicks said California clinics have seen about one patient per day from that state seeking an abortion and other reproductive services. She said even more patients travel from Arizona to seek care.

“My biggest fear is we don’t see an influx because that means people couldn’t receive the support that they needed to travel,” Hicks said. “We’re preparing for that day.”

More than 20 other states are poised to enact new restrictions immediately if the draft Supreme Court opinion becomes final. It is expected in June.

California already has some of the nation’s least-restrictive abortion laws and legislative Democrats have proposed a handful of measures to further expand access to reproductive health care.

They include budgetary requests for clinics that serve low-income patients and a new website to direct patients from California and other states to resources to obtain an abortion.

Lawmakers are also proposing bills that would bar prosecution for miscarriage or pregnancy loss and bolster efforts to recruit and retain abortion providers in the state.

“Protections are essential, but they’re not real unless the services are there and you have access to them,” said Sen. Nancy Skinner (D—Berkeley) “That’s the work of all these bills.”

Republican Assembly member Kevin Kiley (R-Rocklin), who is running for Congress, said in a tweet that the opinion “ would change literally nothing in California. Yet politicians are already using it to push radical policies that go far beyond what Californians of either party support.”

In March, Newsom signed a bill that bans insurers from charging co-pays or other out-of-pocket costs for abortions.

Janelle Salanga contributed to this report.