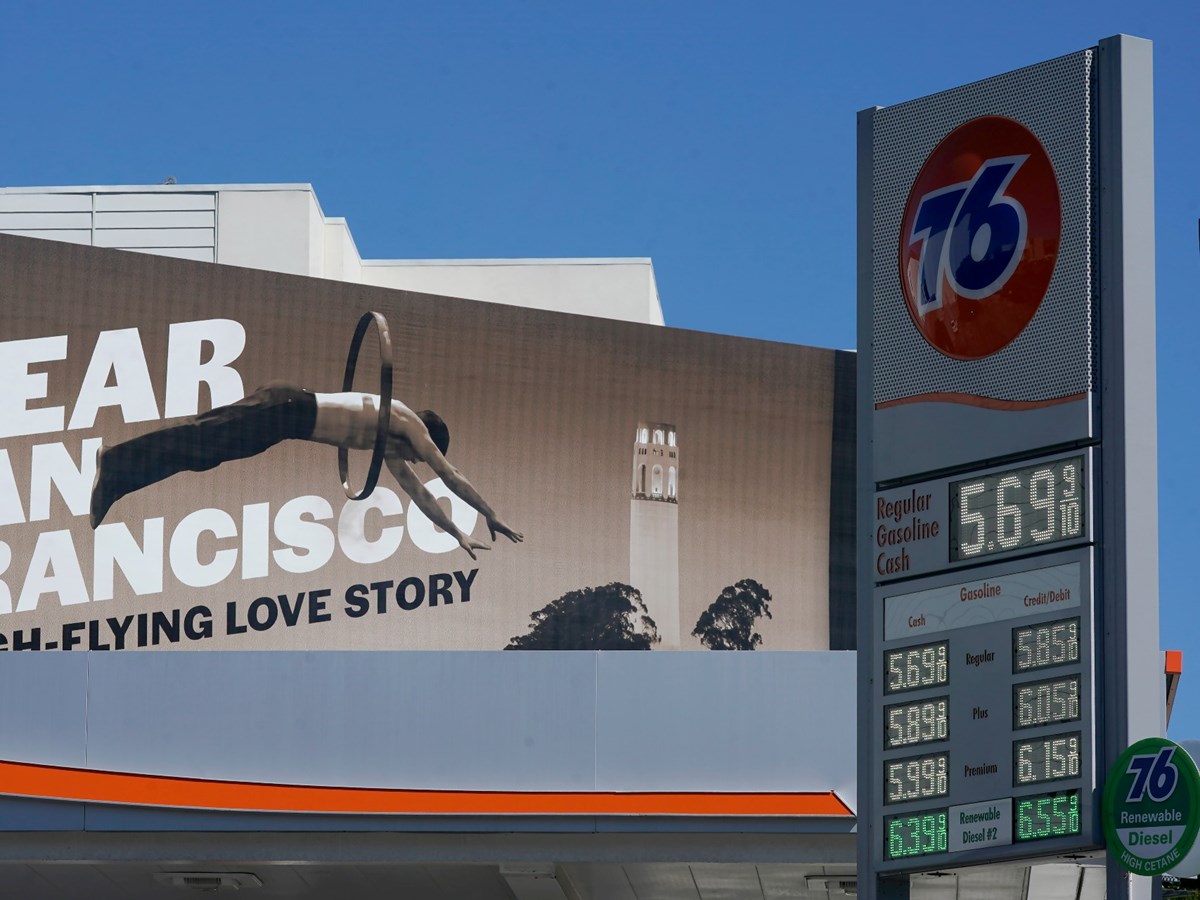 An advertisement for the show "Dear San Francisco: A High-Flying Love Story" is shown behind a price board at a gas station in San Francisco, Tuesday, March 8, 2022.

“Too many Californians are struggling to make ends meet right now,” Assembly member Cottie Petrie-Norris (D–Laguna Beach) said at a press conference outside the state Capitol. “We are here to offer help.”

Other states including New York, Florida and Illinois have proposed temporary pauses on gasoline taxes to help Americans cope with the surging prices — something California Republicans have been calling for since the beginning of the year..

Gov. Gavin Newsom during his annual State of the State last week hinted at a rebate for drivers to address the rising fuel costs. It’s unclear whether the governor will support the Assembly proposal or unveil something different.

Legislative Democrats have largely balked at suspending the gas tax, arguing it provides needed money for roads and infrastructure. Others have pointed out that if the gas tax was halted, there would be nothing stopping oil companies from keeping prices high and pocketing the difference.

Lawmakers say the $400 is the equivalent of a one-year suspension of the 51-cent gas tax for a driver with a 15-gallon gas tank who fills up weekly. But some noted the money could be used to offset other costs.

“What we need right now is money right back in your pocket and then you decide what's important,” said Assembly member Carlos Villapudua (D–Stockton).

The lawmakers behind the proposal did not offer bill language, but said they hoped to have something on Newsom’s desk “this spring.”

Advocates for lower-income people questioned why the rebate would go to millionaires and billionaires instead of being targeted to those hit hardest by rising prices. Some lawmakers teased additional proposals that would be aimed at those residents.

“We want to make sure, as we’re working through this time, that those communities that are struggling the most get the most help,”  said Assembly member Jesse Gabriel (D–Encino). “​​So, this is not going to be the only proposal on the table.”

Republicans say they support any form of tax relief but argued the proposed $400 rebate would take longer to get to taxpayers than the benefit of immediately suspending the gas tax.

Assembly member Kevin Kiley (R–Rocklin) in January introduced a bill that would implement a six-month gas tax suspension and backfill the lost road money from the state’s general fund.

“The fact that [legislative Democrats] were unwilling to pass this and were unwilling to even hear it in committee so far just shows how out of touch the supermajority is at this capitol with the everyday lives of Californians,” he said.

For the second year, California is facing a massive surplus, which is currently projected at nearly $46 billion. The surplus could trigger the state’s spending limit — commonly referred to as the Gann Limit — which would require a rebate to taxpayers.

Lawmakers behind the $400 rebate acknowledged the spending cap but said it “has not informed” their proposal.

“Because of the Gann Limit, we are in a historic position to give money back to California taxpayers, and we want to do that urgently,” Petrie-Norris said. “We want to do that immediately.”

The Legislature can avoid tax rebates under the Gann Limit by spending a certain amount of money on specific projects such as infrastructure and schools.