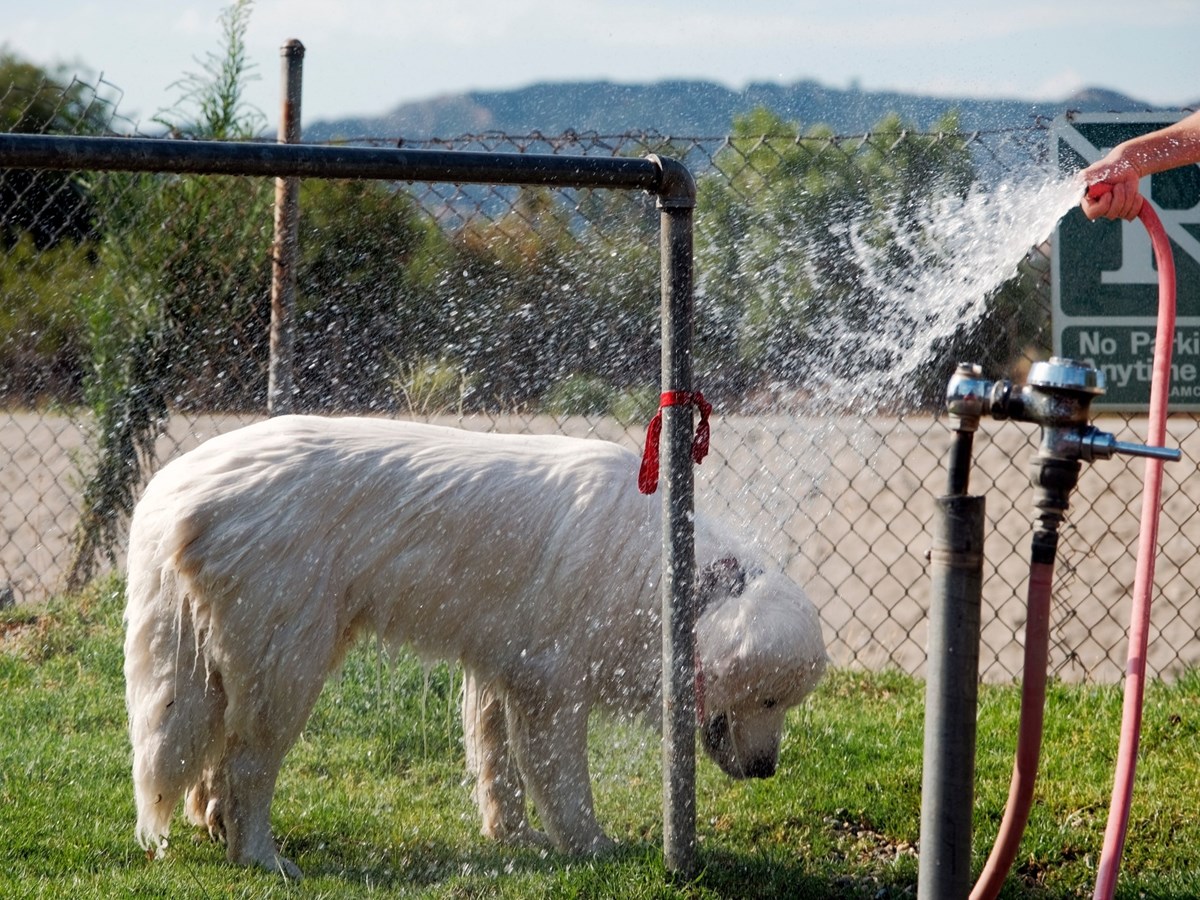 A dog is hosed down with a cooling bath after a visit to Sepulveda Basin Dog Park in the Encino section of Los Angeles on Saturday, Aug. 15, 2020.

In response to the increasing intensity and frequency of deadly heat waves in California, state lawmakers are now working on a plan for better emergency alerts.

Much like the ranking of hurricanes and tornadoes, this system would be used to help people better understand the severity of forecasted heat. While there aren't details yet what the system would look like, legislation could be introduced as early as January. Proponents will be building off of similar frameworks created by the EPA and Red Cross.

Reporting from the Los Angeles Times this year showed heat likely caused the deaths of some 3,900 people in California over the past decade, which is far above official estimates.

Kathy Baughman McLeod is the director of the Adrienne Arsht Rockefeller Foundation Resilience Center at the Atlantic Council, an organization that’s helping California lawmakers in their effort to create the heat-ranking system. She spoke with CapRadio’s Randol White about how it might work.

What is your organization's role in shaping this California legislation that's expected to be introduced next month?

We are focused on our mission of building the human capacity for resilience to the effects of climate change, and we have launched and built a global alliance around tackling extreme heat. It kills more people than any other climate driven hazard. And our organization with this alliance and partners were focused on reducing the deaths and the loss of livelihoods from heat. This legislation in California is an incredible opportunity to advance the early warning systems that help people get prepared and understand how severe heat waves are and protect themselves.

Why start at the state level? California is, of course, not the only state dealing with deadly heat waves. Is your organization thinking about a national ranking system as well?

Yes. And we're working with cities all around the world. We want to work at every level to make this a standard practice that heat waves get named and categorized and people fully understand the risks, and they know exactly what to do when they get that warning.

Is there a danger that if you're working with all these different levels, that there might not be a consistency for people that move from, say, state to state or country to country?

We are recommending a single approach to the methodology of how the heat waves get categorized, and it's based on expected health outcomes from that particular heat wave, combined with the health of the community. And so it's a framework we are building that's, you know, strong enough for every community to use it, but flexible enough for it to match the health and the risk of each community.

Because the system looks at more things than just the weather, is that why you're not working through an organization like NOAA or the National Weather Service?

The National Weather Service and NOAA are essential in the United States for this to be a standard practice across the country. And so we are in communication about the methodology. And so we hope to be working together. This is one of the ways we can help bring attention and new policies that can be replicated by other communities.

Is there opposition to this effort?

There is skepticism about the naming aspects of this. We have begun to collect data around the way people respond to names: should it be a human name, should it be flora and fauna, should it be a Greek letter? And how will people respond? And is the severity conveyed through a name and a category? And interestingly, there's not a lot of data around the performance of naming a hurricane, and so we're going to bring data to this and as much science as we can to the decisions that leaders can make around how they best protect people with early warning systems like this.