A historic and expensive move years in the making is finally underway at California’s Capitol in downtown Sacramento.

Lawmakers and staff are vacating their nearly 70-year-old office space, known as the annex, and preparing for it to be bulldozed and replaced with a new space built to modern safety and accessibility codes.

But the future of the annex is still uncertain: activists are suing to preserve it, arguing the state violated environmental law by pre-committing to its demolition. They also believe the mid-century modern building could be gutted and rehabilitated for less than what it would cost to build a new office.

Assemblymember Ken Cooley (D–Rancho Cordova), the lawmaker overseeing the project, says the annex, built in 1952, has safety hazards such as asbestos and lead and is not friendly for visitors with limited mobility. It also lacks the space for all legislative staff, forcing some committee analysts to work outside the Capitol and away from the lawmakers they aid.

“The current building definitely does not support the work of the Legislature in the way the Capitol used to,” Cooley said in an interview. “This is a building that was built for a part-time legislature.” California’s legislature became full-time in the 1960s.

Staff began boxing up their offices months ago, but the move began in earnest last week, when the first offices got permission to move into the “swing space” located two blocks south on 10th and O streets. 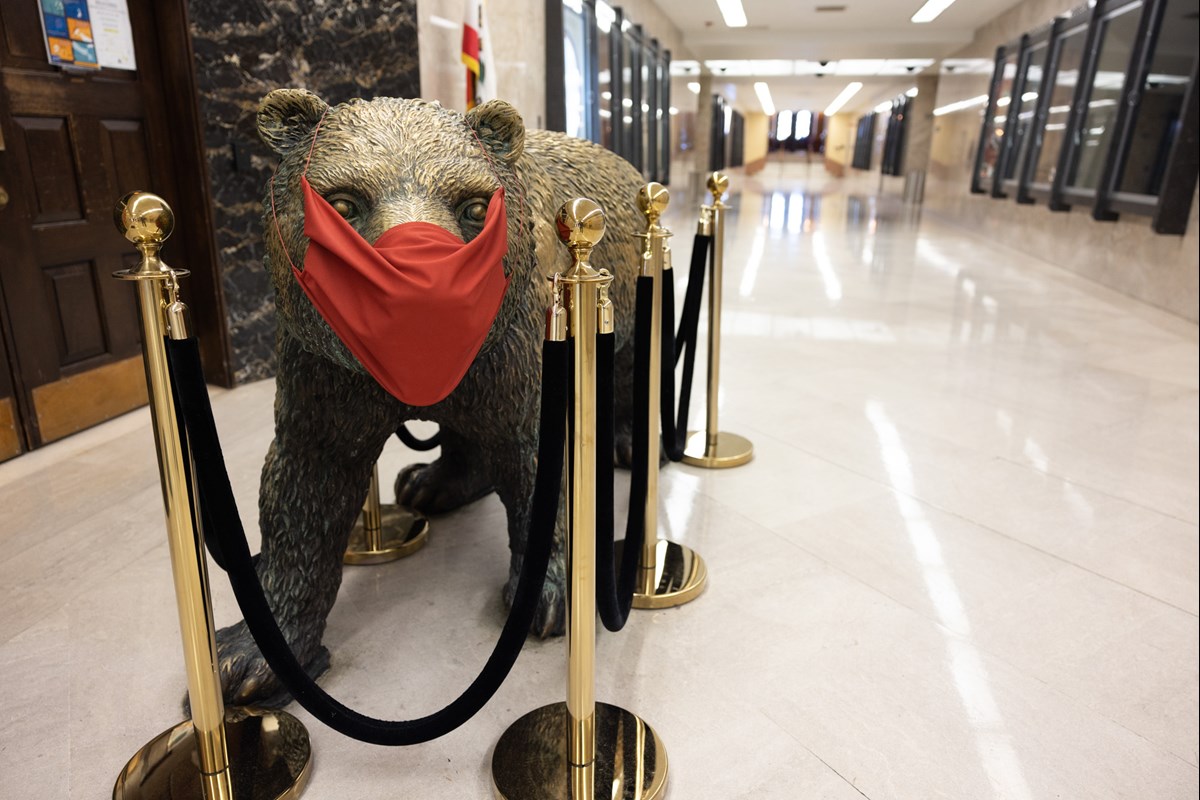 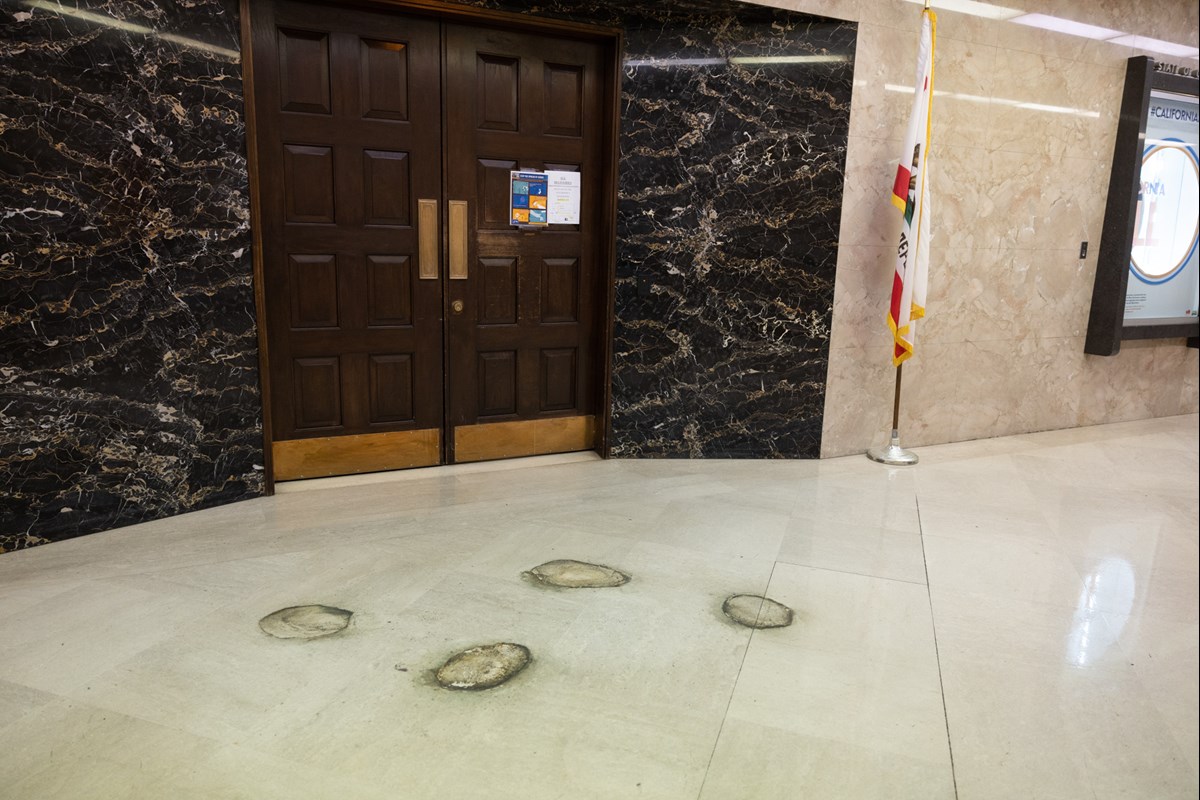 Outside the Governor's office on Monday, Nov. 22, 2021 with the bear statue removed.Andrew Nixon / CapRadio

An 800-pound bronze statue of a bear outside the governor’s office, affectionately dubbed the “Bacteria Bear” for drawing the hands of touring students, was one of the first things moved to the new executive suite last month. The bear has stood watch outside the governor’s first-floor office since Gov. Arnold Schwarzenegger had it installed in 2009.

Many legislative staffers say they are looking forward to the new office and its modern amenities, such as air filters, temperature control, lactation rooms and more spacious working spaces.

“It has to be, I mean I can’t imagine it not being bigger,” George Andrews, chief of staff for a Republican Assemblymember Tom Lackey, said with a laugh as he unrolled a length of packing tape.

Lackey and his staff have what Andrews calls a “fortress office,” with no windows but quick access to the Assembly floor.

The Palmdale Republican’s personal office was packed up weeks ago, exposing bare shelves and walls of the wood-paneled room.

“The cheesy wooden wall — well, cheesy to us here in the 21st century. I’m sure back then it was royal or whatever,” Andrews said. 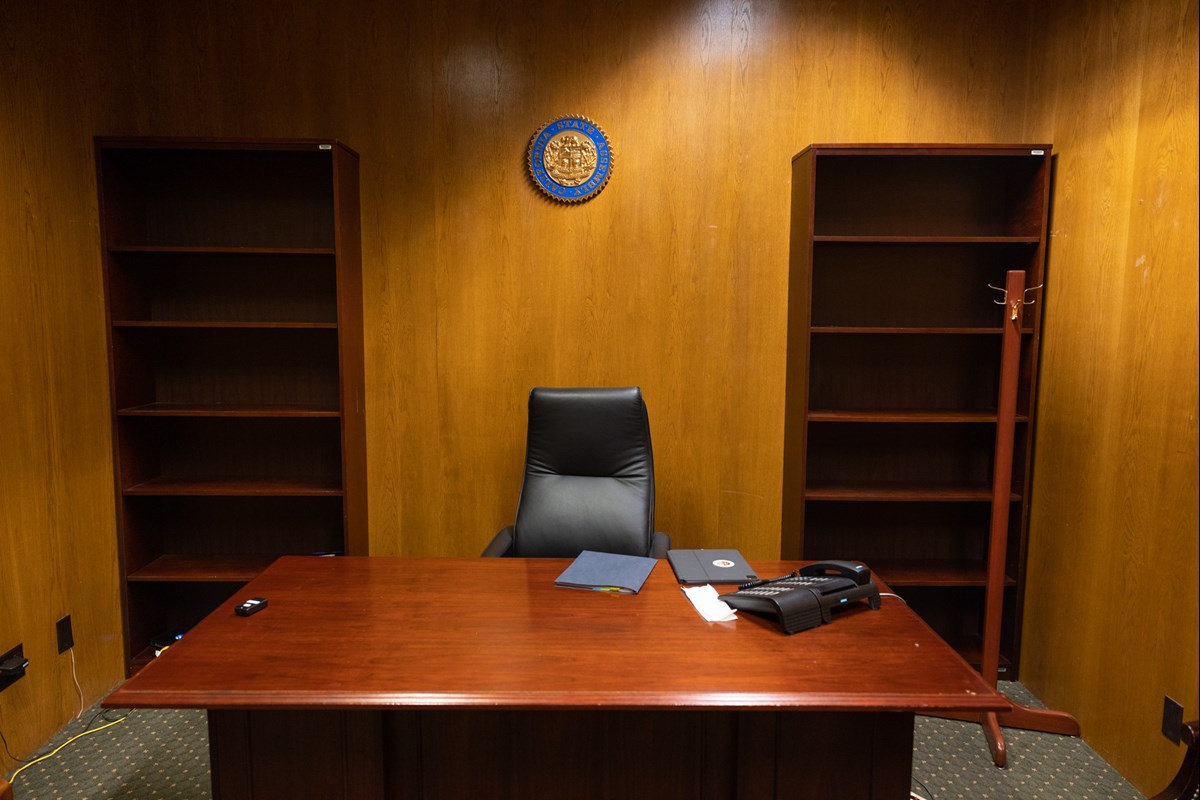 The temporary swing space will house lawmakers, the governor’s office and more than 1,000 state government staff for the next several years until the annex update is complete, likely around 2025.

The historic west wing, which includes the Capitol dome, legislative chambers and several hearing rooms, will continue to be used throughout construction. 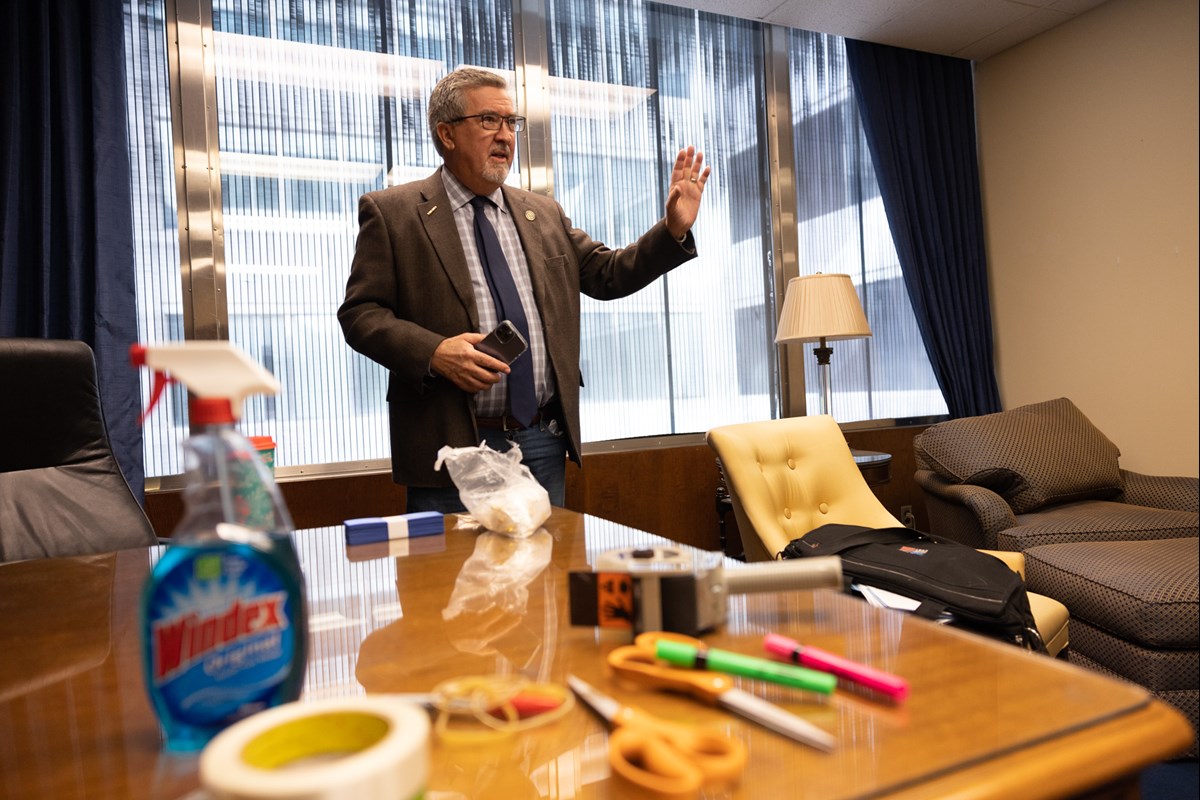 Assembly member Ken Cooley (D) in his Capitol office as it is being prepared to move to the "swing space" on O Street during construction on the Capitol, Monday, Nov 22, 2021.Andrew Nixon / CapRadio

The update has been in the works for years. Lawmakers allocated more than $750 million for the project in 2018, though it may end up costing more due to rising construction costs and additional security measures, Cooley says. The swing building, which will be used for other state agencies when lawmakers move back to the capitol, cost roughly $430 million.

But with lawsuits challenging the planned construction, Cooley said the annex won’t be torn down until the matter is settled in court — likely in early 2022.

Activists have fired off a set of legal challenges against the project, arguing the planned demolition did not undergo a proper environmental review and that it would displace more than 100 trees on the Capitol grounds.

“This project, as it stands, impacts over one-quarter of the trees,” in the Capitol park, said Anne Fenkner, an arborist with the California Urban Forests Council. “There is no plan to protect them.”

While dozens of trees — including a dedicated sequoia and a redwood grown from a seed that orbited the moon — would be protected in place during construction, more than 50 others would be removed and replaced.

Another 49 palm trees lining the Capitol grounds on L and N streets would be transplanted. But Fenkner says many of the delicate palms are unlikely to survive.

“These trees provide shade, beauty, historic context and perhaps most importantly, significant ecosystem services in their wood and roots,” she said. “We owe it to previous generations and to the future to figure this out. To come up with better solutions.” 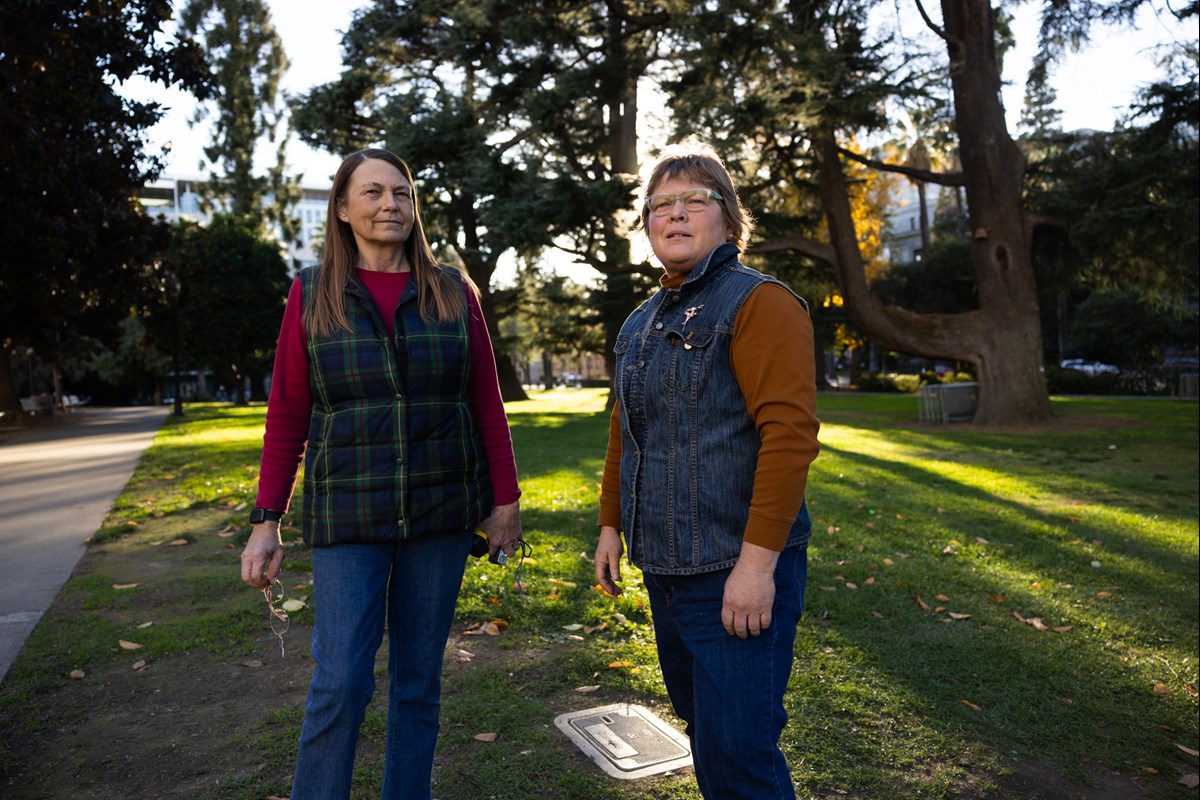 Paula Peper, an urban ecologist, and Anne Fenkner, an arborist, stand on the West side of Capitol Park in Sacramento Wednesday, Nov. 24, 2021.Andrew Nixon / CapRadio

Milford Wayne Donaldson, a preservation architect who advised the Obama administration and former governors Jerry Brown and Arnold Schwarzenegger, accused Cooley and other state officials of not making a genuine effort to save the historic annex.

While he acknowledges it needs significant upgrades, Donaldson says the building, with its marble hallways and bronze accents, was “meant to last and can easily be adapted or reused.” 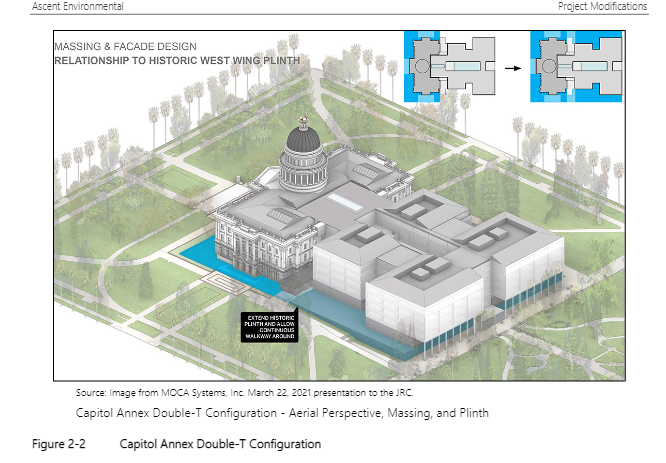 He called the planned design, which has an all-glass façade, a “monstrosity” which doesn’t match the design of the historic Capitol and could pose safety concerns for the government officials and staff working inside.

Donaldson also argues that while Cooley and officials with the Departments of Finance and General Services publicly committed to exploring options for the future of the annex — whether it’s construction of a new building or restoring and rehabilitating the current structure — a 2018 Memorandum of Understanding “foreclosed any option but demolition.”

The terms of the MOU state the “Capitol Annex Project consists of the design and construction, including any related studies, of a new, approximately 500,000 gross square foot State Capitol Building Annex.” 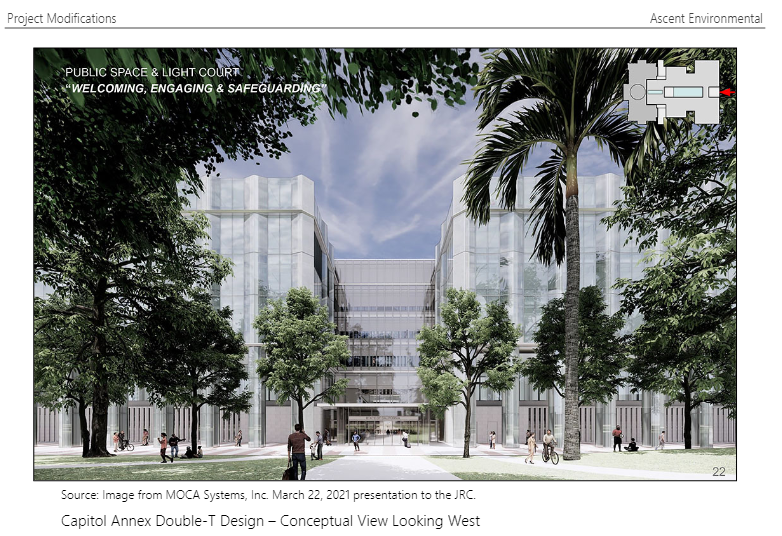 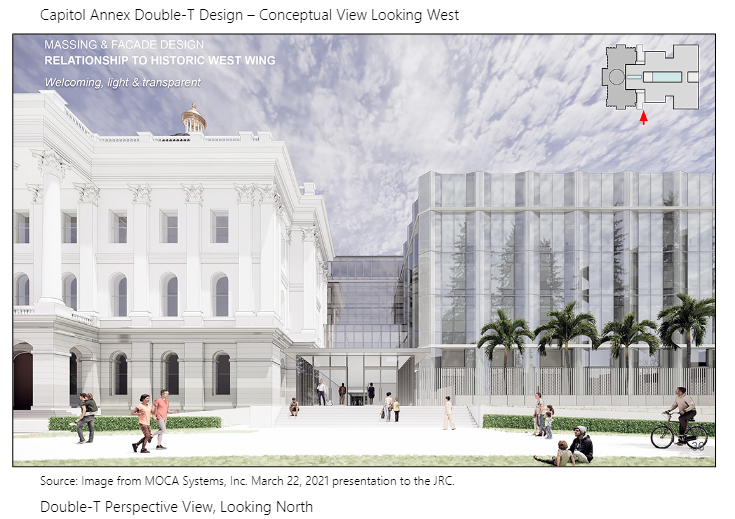 “Whatever direction ensues from the court, we will move forward,” Cooley said of the legal challenges, whether it means leveling the building and starting over as planned, or rehabilitating it.

Also in the works are a new parking garage and a visitor center beneath the west side of the Capitol, similar to the subterranean visitor center at the U.S. Capitol. Cooley said it would serve as a central gathering and educational space for visiting students and tourists and may be completed before the annex update.

“Given the intensity of traffic through the state Capitol, it would change the day-to-day dynamics of the first floor,” Cooley said. “If we are encouraging the visiting groups to enter the capitol on the west side through a visitor center, the workaday traffic coming to the annex would not be waiting for all the fourth graders to come through.”

The Sacramento-area Democrat said the current move out — and the move back in — are scheduled around very narrow windows to avoid election cycles and the legislative session.

Cooley terms out of the legislature in 2024, but if all goes as planned, he said lawmakers, the governor and their staffs will move into the updated annex in the fall of 2025, which happens to be California’s 175th anniversary of statehood.