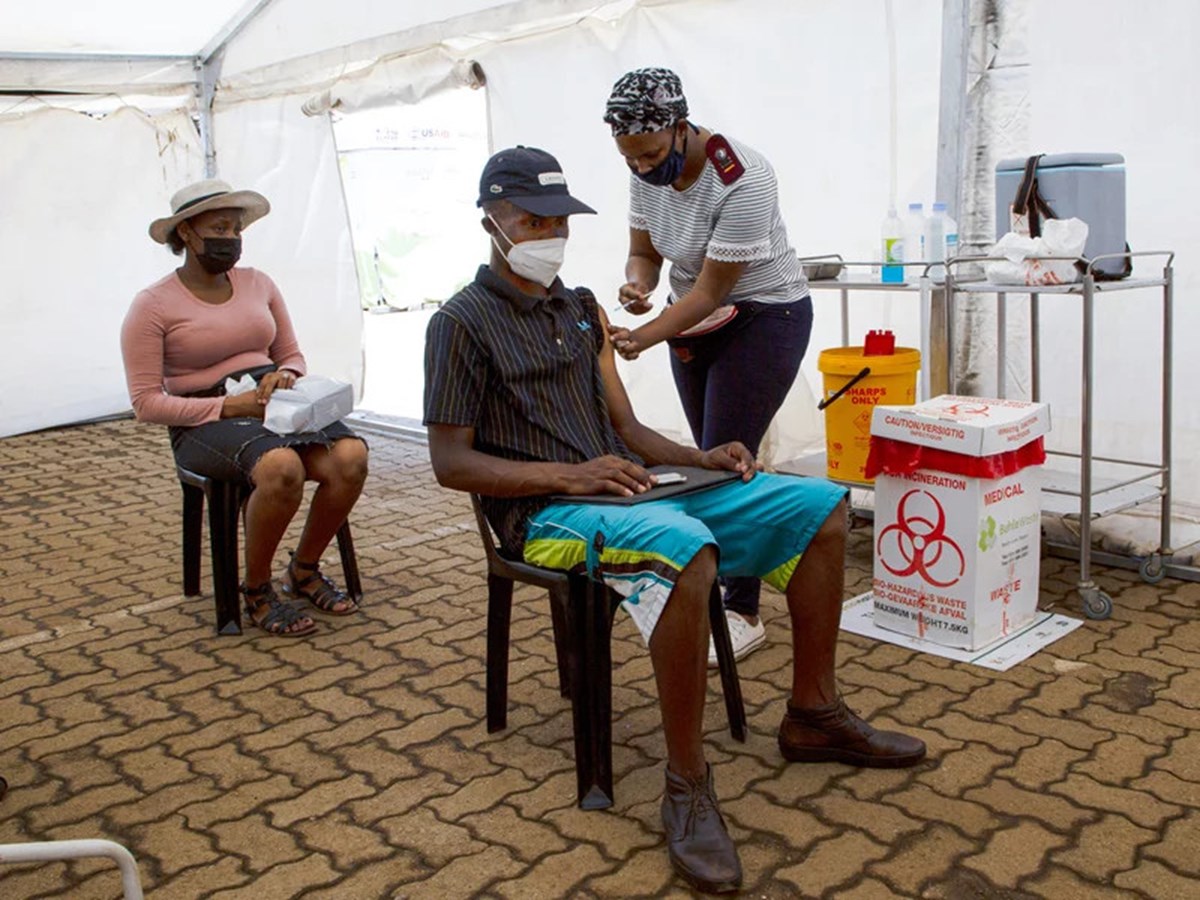 A man receives a dose of a COVID-19 vaccine in Soweto, Johannesburg, South Africa, on Monday. The omicron variant, first identified in South Africa, has now spread to at least a dozen other countries.

A few weeks ago, South Africa was in an enviable state. After several massive COVID-19 surges, including one fueled by the highly contagious delta variant, the country's daily cases had plummeted and were in a lull.

Then, a sudden burst of cases showed up among university students around the city of Pretoria. Scientists thought the delta variant was probably causing the spike. But to be sure, they decided to sequence the genome of the virus from one of the cases.

It wasn't delta at all.

"All of a sudden, there's this creature with all these mutations — and I mean a lot of mutations," says Dr. Jeremy Luban, a virologist at the University of Massachusetts Medical School.

Last week, scientists in South Africa and Botswana detected a new strain of the coronavirus, one with about 50 mutations across its genome. By contrast, other variants, such as delta, have fewer than 20 mutations.

Known as omicron, the new variant has put the globe on alert. Since Nov. 24, when the variant was first reported to the World Health Organization, health officials have detected omicron in more than a dozen countries across at least five continents. The variant poses a "very high" risk, the WHO said on Monday.

So far, scientists have limited information about omicron. But several red flags suggest that this strain of the coronavirus could quickly cause surges in many parts of the world and could be the most contagious one known.

Over the past two weeks, omicron has spread to at least seven of South Africa's nine provinces, quickly overtaking the country's outbreak and thus, it appears, outcompeting delta, says virologist Pei-Yong Shi of the University of Texas Medical Branch in Galveston.

"Based on the epidemiology data, it seems like the new variant has advantages in transmitting over the previous variants," Shi says.

So far, delta is the most contagious variant known. Within about nine months, it swept through all of the continents except Antarctica, pushing out other variants and causing huge surges in cases.

If omicron is more transmissible, that would be quite remarkable, says the University of Massachusetts' Luban.

"Everyone is afraid that omicron will be significantly more transmissible than delta. Upon first impression, it looks like it could be," he says. "But that could be totally wrong. Right now, nobody knows. The problem is that our data is very limited."

At the moment, the only data scientists have to estimate omicron's transmissibility comes largely from the cluster of cases at a university in Pretoria. The rapid rise in cases there could be due, in part, to a superspreading event.

However, some specific mutations in omicron do suggest it will be quite transmissible, Luban says.

Omicron's mutations may help it evade the immune system

On top of that, the WHO says there's preliminary evidence that omicron increases the risk of reinfections. So people who already had COVID-19 could be more vulnerable to a second infection.

Omicron carries many mutations that likely help the variant evade the immune system, says virologist Paul Bieniasz at Rockefeller University in New York. Some of these mutations exist in other variants, but not all together in a single one. So Bieniasz and his colleagues have already conducted lab research on key mutations that show up in omicron and found that they can help prevent antibodies from killing the virus.

"Based on that, we expect that omicron will be significantly resistant to antibodies that are circulating in individuals who are convalescent or who have had mRNA vaccines," Bieniasz says, referring to the technology used by the Pfizer and Moderna COVID-19 vaccines.

As a result, the vaccines will likely be less effective against this variant, he predicts. But his research so far also suggests that people can boost their protection — against any variant — by having three exposures to the virus. So that means either three doses of the vaccine or two doses after a natural infection.

That seems to broaden your defenses, says Shi, the virologist at the University of Texas Medical Branch. "After the third dose of the vaccine, our antibody profile inside our body becomes more capable of blocking the variants," he says. "Our bodies create different antibodies that are much more able to push back on the variants."