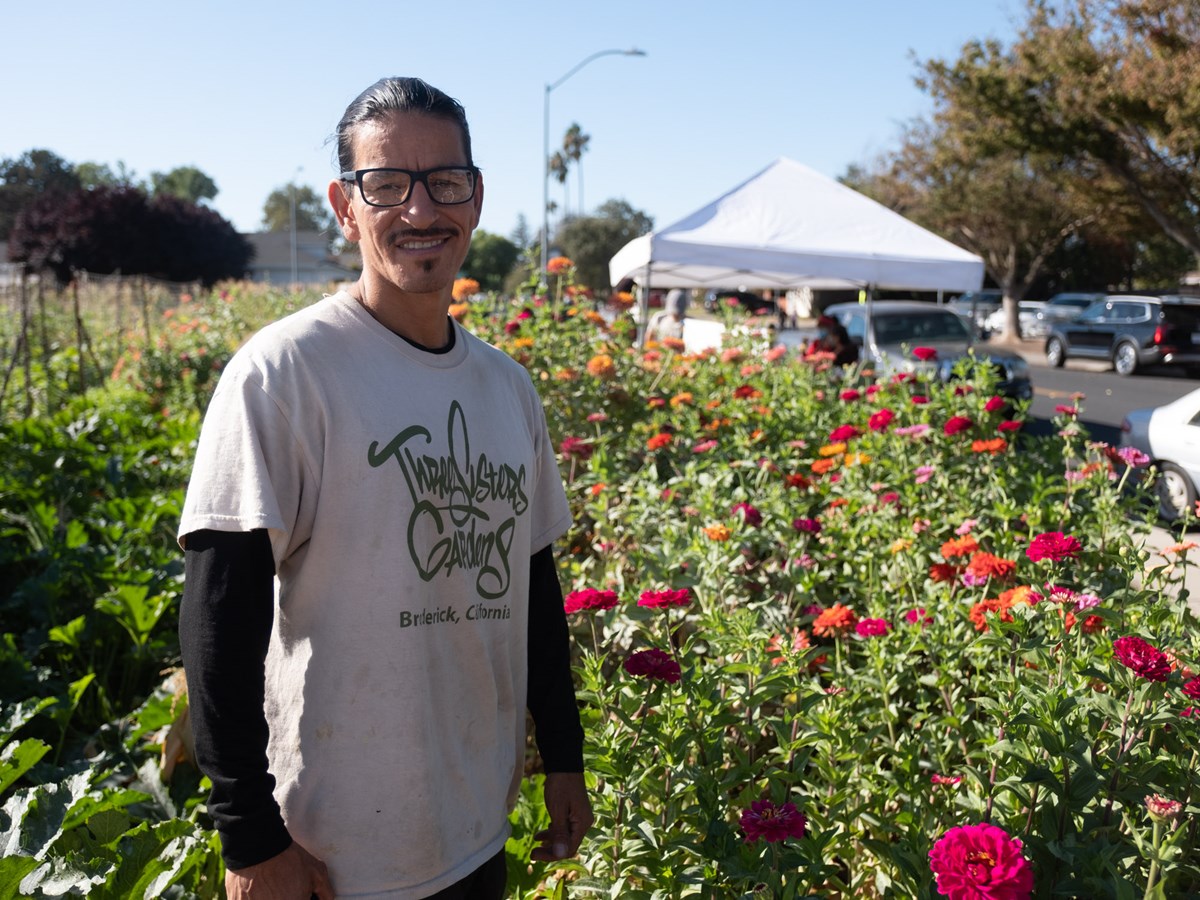 Fatima Malik wants to reframe what it looks like to help her food-insecure neighbors during the cold months.

Malik, the founder of the Del Paso Heights Growers Alliance, says that starts with moving away from the "food as charity approach."

Instead, she says people have to also think about whether others “have the access to the tools, facilities, equipment, knowledge, skills to even prepare that food.”

In the world of food banks, efforts around mid-Autumn double up to accommodate drives aimed at offering food to families during the holidays. But those holidays — typically Thanksgiving and Christmas — aren’t the main focus for all Sacramentans.

Malik and others at several community farms, especially those focused on communities of color, have sought to reframe thinking around “giving” this time of year.

“Especially those that are economically disadvantaged, they need food every day," Malik said.

Through her cooperative’s two community gardens, Malik plans to offer monthly educational workshops on how to care for one’s crop through the winter months. These feed into a long term goal she has for participants, which is that they create their own yearlong plan for what they want to plant and eat.

It helps participants understand how they can come closer to “food sovereignty” in their own lives — that is, being able to more reliably sustain themselves, especially when the cost of food is high, she says.

“That’s to us, again, moving beyond the charity approach and beginning to empower community members with the knowledge, skills and abilities that they need to be able to to thrive,” Malik said. “And that's advancing equity, especially racial equity, and addressing a lot of the food insecurity that we see right now.”

A garden as community

During the fall and winter holidays, especially those in which workplaces typically offer time off, Ram Khatiwoda sees families eager to work at the New Roots farm in West Sacramento. Khatiwoda is the farmstand manager for New Roots, an organization that reserves half of its farmland in Sacramento for refugees like himself who are interested in having their own plot.

The cold weather doesn’t deter them. Since the pandemic began, he says the farm has offered a space for families to spend time with others safely outside of their homes. And even before then, they’ve come during holiday breaks to tend to winter crops.

“Now is the time to slow down, don’t worry about your job, just come have family time together,” Khatiwoda said. “The parent has time and… [children] have a place to jump around and be healthy and happy.”

There’s a social component, too. While not all families participating in the farm celebrate Western holidays, Khatiwoda says that many find that the space offers time for community and a connection to their cultures.

“This is also a platform where people can come talk and sit and can recall their life,” he said. “How they used to grow food back in their country and teach children how to grow food right here.”

A garden as reflection

Alfred Melbourne doesn’t celebrate Thanksgiving. As an Indigenous person who is both Hunkpapa Lakota and a member of the Fort Peck Assiniboine and Sioux Tribes, he says the holiday is not a means for celebration for himself or his community.

Instead, Melbourne reflects on his own ancestral knowledge, and often encourages others to rethink what the holiday means to them.

“I don't want to rain on anyone's parade or speak poorly of these traditions that folks have inherited,” he said. “I would just like to think that we can start instilling some different types of thoughts and mentality when it comes to caring for others around us.”

As part of the mission of Three Sisters Gardens, the project Melbourne began in 2018 through which he now runs four gardening sites in West Sacramento, he works to connect neighborhood youth with farmwork that encourages a deeper relationship with the land they live on.

Overtime, he says he’s seen a disconnect between youth and their ancestral knowledge — and subsequently the consequences, like an over-reliance on grocery stores for food rather than a focus on learning to sustain a community through their own means.

In the summer, Three Sisters hosted a weekly, outdoor farm stand in West Sacramento, offering produce to community members for free. They stopped offering the stand in October, but Melbourne says that he still sees people who didn’t get the notice lining up for it. It’s evidence to him of the need for more sustainable food sources.

Melbourne says that he hopes to raise enough funds to set up  a mobile food stand. But for now, he says that community members can reach out to Three Sisters and schedule pickups at farm locations if they’re in need of produce.

He also wants to keep providing events for youth at the farm, even if that looks different than what was offered in the summer.

“I'm trying to teach these youngsters around me how to grow their own food and care for themselves,” he said. “So these are things that my grandparents, your grandparents, generations before us — they knew just because it was what we had to do to feed ourselves.”

A garden as teacher

Chanowk Yisrael looks to his garden for reminders of the ways in which life continues on. While some plants with outstretched leaves and vines wither away in the winter chill, others thrive.

Among those that keep alive are trees bearing nuts or winter citrus. While nuts provide protein for animals stocking up to survive the cold, citrus offers vitamin C, which helps immune systems combat wintertime ailments.

“It's not by accident that we're in a perfect environment where an abundance of citrus fruit can grow,” he said. “All of these seasonal things that take place are designed to support our health.”

For Yisrael, this is a useful alternative framework to view the changing of seasons beyond the holidays. In previous years, he’s offered classes at the Yisrael Family Farm in South Oak Park, which he owns, that further outline his thinking.

He emphasizes how many cultures have long learned their harmonious relationship with nature through each season. That learning, in itself, is a tradition he says; cold months have also traditionally encouraged gathering indoors and sharing of knowledge. They offer the time for storytelling to take place and, alongside that, the passage of wisdom.

While the farm likely won’t offer those classes this year due to coronavirus precautions, Yisrael says that they’re planning to sell self-care kits and plenty of greens at upcoming farmers markets.