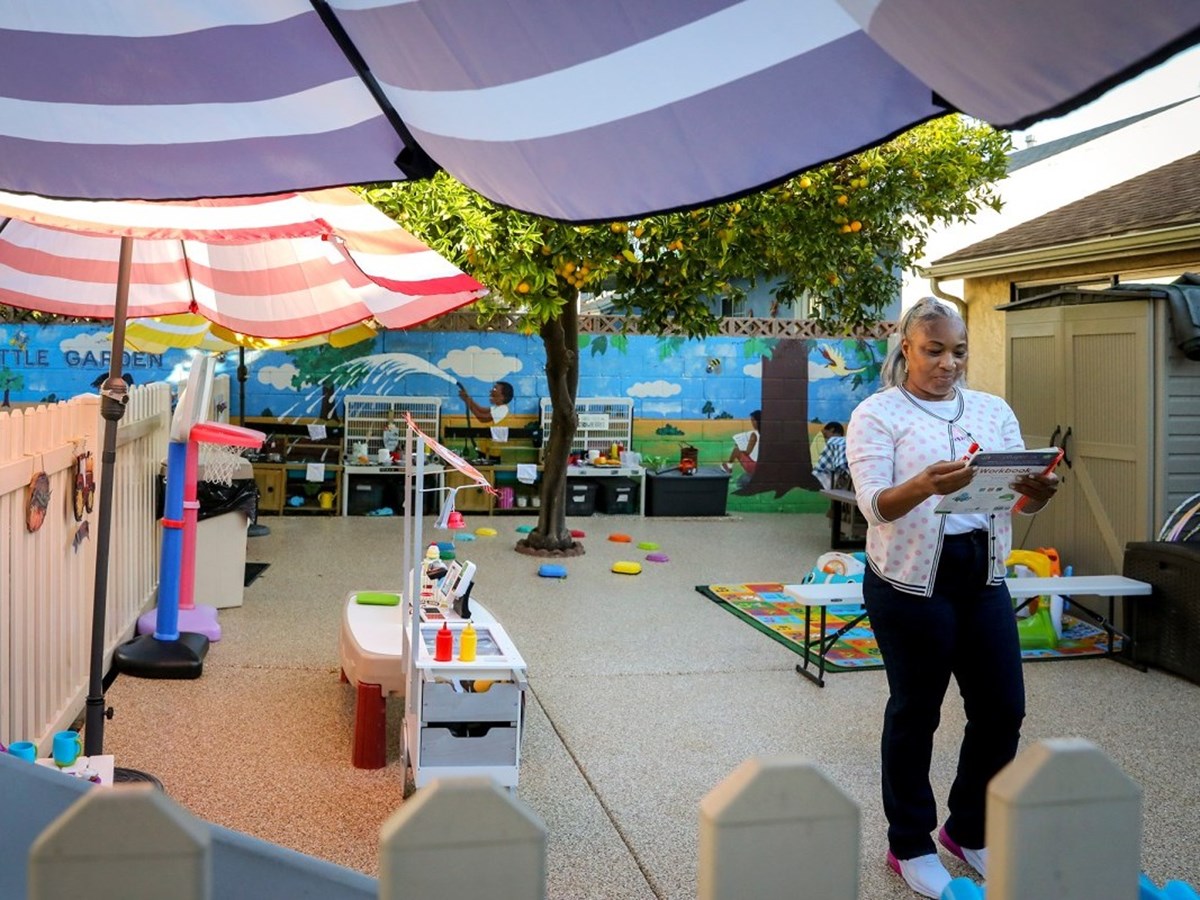 During the early morning, Tonya Muhammad walks through the playground of her child care in Hawthorne, making last inspections before children arrive on Oct. 28, 2021.

For Tonya Muhammad, who runs Lil Critters Family Daycare in Hawthorne, spring of 2020 was, in a word, “horrible.” The early rush on cleaning supplies meant that she and her husband had to criss-cross Los Angeles to find disinfectant, sourcing bottles of Lysol from a dental supply company and aloe vera from a local nursery to make homemade hand sanitizer.

But that wasn’t the worst of it. Muhammad’s assistant left, fearing for the health of her grandmother, whom she lived with. That was in March of 2020, and Muhammad hasn’t been able to find a replacement since, despite posting the job on Indeed, Facebook Jobs and at a nearby community college. “I’ve even paid for fingerprints for a couple (of applicants) and then there’s just no follow up,” said Muhammad.

Without the watchful eyes of a second adult, she’s had to reduce the number of kids she looks after from 14 to 6, and has gone from being a 24-hour day care to operating from 6 a.m. to 5:30 p.m. She estimates that her income from the day care has fallen by more than half.

California lost about 27,800 child care workers between February and April of 2020 — or roughly a third of its workforce — according to data from the Bureau of Labor Statistics. From then through September of 2021, about 19,600 have come back. Still, the workforce is about 10% smaller than it was pre-pandemic.

Even before the pandemic, however, there wasn’t enough child care available in California to meet families’ needs. Labor issues that long bubbled below the surface are now driving acute staffing shortages: low pay, long hours and limited benefits. That makes it hard to earn a living in the industry that supports the rest of the economy.

Child care providers find themselves stretching across a gap between what parents are able to afford and the wages they need to offer in order to attract and retain staff.

Still most Californian child care is provided through the private market. And that system has failed miserably, says Elena Montoya, a senior research and policy associate at UC Berkeley’s Center for the Study of Child Care Employment. “The current (labor) shortage is a result of placing the burden of paying for child care on parents, rather than acknowledging that child care is a public good.”

A pandemic was the last thing childcare providers needed. Day care centers weren’t sure what the COVID-19 rules would be for them and were struggling to secure protective gear, said Cecilia Rojas, resource and referral manager at Crystal Stairs Inc., a Los Angeles-based organization that helps families find child care. Some child care workers quit to take care of their own school-aged children, who were suddenly stuck at home. Others left because they were worried about being exposed to the virus. Parents pulled their kids out of day care, leading to budget shortfalls and closures.

Federal and state relief funds did help keep child care facilities open. A survey of early childhood educators conducted by the National Association for the Education of Young Children in early summer found that nearly half of the 1,200 respondents in California said they would have had to close were it not for the aid.

But the federal funds, said Montoya, “as important and terrific as they are, they really are a short-term stopgap to avoid the total collapse of the system.”

California did make a large investment in transitional kindergarten in July, committing $2.7 billion to expand free transitional kindergarten to all 4-year-olds across the state by the school year that starts in 2025.  Proponents consider that a game-changer; some child care operators fear it could undercut their business model as they lose 4-year-olds whose tuition helps cover the higher cost of caring for infants.

In the meantime, lots of child care facilities can’t fill their job openings. “Programs are actually having to close for the day or for the week, and it’s not because they don’t have children to serve,” said Nina Buthee, executive director of Every Child California, an organization that supports early childhood educators. It’s because they’re short staffed. Buthee says it’s the first time she’s heard of that happening in the 20 years she’s been working on childcare issues.

Child care workers earn lower wages than pre-K teachers, who in turn make less than kindergarten teachers, according to data from the Center for the Study of Child Care Employment at Berkeley. There are several factors driving the pay gap.

One is that kindergarten teachers are required to have bachelor’s degrees, whereas child care providers typically are not. But there are less quantifiable factors too.

“We’ve undervalued and underpaid caregiving” said Kristin Schumacher, a senior analyst at the California Budget and Policy Center, “for as long as it’s been a career choice, and this has sexist and racist roots that can be traced back to slavery.”

The lower pay for child care workers also creates a racial pay disparity among early childhood educators, since Black and Latino women are more likely to work with infants and toddlers than their white peers, says Montoya. Researchers at the Berkeley center calculated that nationally, Black early educators are paid on average $0.78 less per hour than their white counterparts.

The wages are so low that many child care workers have side gigs or second jobs to make ends meet. Muhammad wrote a book about child care and also works as a consultant, advising other providers. She now makes about half of her income from those other endeavors.

Tonia McMillian, who owns a family child care business in Bellflower and was active in the effort to unionize child care workers, also teaches CPR classes and runs a catering business. At one point, she said, she was paying her staff minimum wage but only making $4.15 per hour herself, after covering all the costs of running the business. “Something (is) wrong with that picture,” she said.

One way or the other, there’s public money going to child care workers, says Gemma DiMatteo, research director for California Child Care Resource and Referral Network. “It’s through these social support services, or you could just fund the child care and make sure that the staff is getting paid adequately.”

One factor holding down child care providers’ low wages: the state reimbursement rate for care to low and moderate income families. The state uses two rates, depending on the subsidy program. One, known as the regional market rate, is used to subsidize care for parents who have lower incomes and are working or seeking employment. That rate isn’t based on what it costs to provide high quality child care and pay staff well — it’s based on a state study of what child care providers in different regions charge families. But the market rate isn’t necessarily representative of how much child care providers actually need; it reflects what they think they can reasonably charge parents who are already, in many cases, paying more than they can afford.

The regional market rate also is often out-of-date. The state conducts the market analysis every couple of years; right now, California is reimbursing some child care providers based on numbers from 2018.

Muhammad said that for her, even that 15% increase the home-based child care providers union won’t make a meaningful difference.

Child care has been underfunded for so long, said Buthee, director of Every Child California, that rate increases need to be huge to make a difference. Making the system whole in California would cost about a billion dollars, she continued. “When you look at the budget it’s like ‘whoa whoa whoa, that’s too much money’” she said, but “that’s just how much it costs to catch up.” 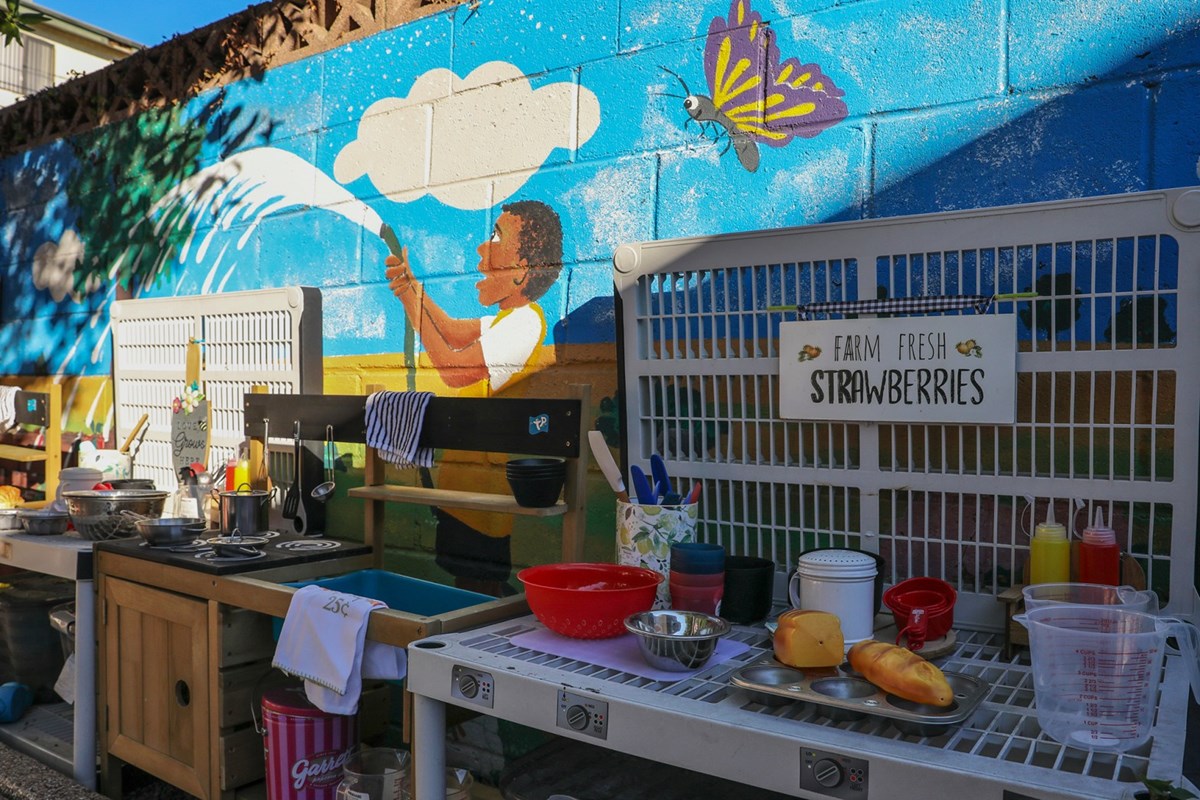 A “mud kitchen” for children to play at Tonya Muhammad’s child care in Hawthorne on Oct. 28, 2021.Zaydee Sanchez / CalMatters

Harmit Pabla, who owns Genius Kids, a child care center in Sacramento County that serves more than 100 kids, has had six of his staff of 16 leave over the last year. Three left for reasons directly related to the pandemic and three found different jobs, including at Amazon and Walmart distribution centers. Those companies offered slightly better benefits, said Pabla. As large corporations, they have more buying power to negotiate lower rates with insurance companies. “We can’t compete with the big boys,” Pabla said.

He’s getting inquiries from parents about openings, but he said he’s not accepting more children because he can’t find staff.

Across California, 77% of early childhood educators surveyed identify wages as the main recruitment challenge. But unlike other industries, where business owners can cover increasing wages by raising prices, lots of child care owners know their customers — parents — can’t afford to pay more.

While kids are heading back to in-person school and the coronavirus delta variant appears to be in decline, California’s child care system is not in the clear. The survey by the National Association for the Education of Young Children found that 47% of respondents in California were considering leaving their program or closing their home child care location within the next year.

That may be especially true for workers who had just gotten their start before the virus made the job more risky and complicated.

“Will we lose those excited new educators who could have gone on to become really seasoned, amazing contributors to the field?” asked Krista Olson, a research and policy associate at the Berkeley Center for the Study of Child Care Employment.

McMillian, who is 62, hopes to retire from child care soon. “It’s extremely hard to walk away, especially if you don’t have a nest egg,” she said. She’s started working as a child care consultant, and just signed a lease on space to open a sports bar.

Muhammad is planning her exit too. Once she winds down her child care business, she’ll be relying on her other gigs—her consulting, a child care course and book she wrote, a hotline she runs to answer providers’ questions, speaking gigs and more. It will take some time to make sure those projects bring in enough steady income. “I wish it was yesterday,” she said, “but I’m giving myself a year.”