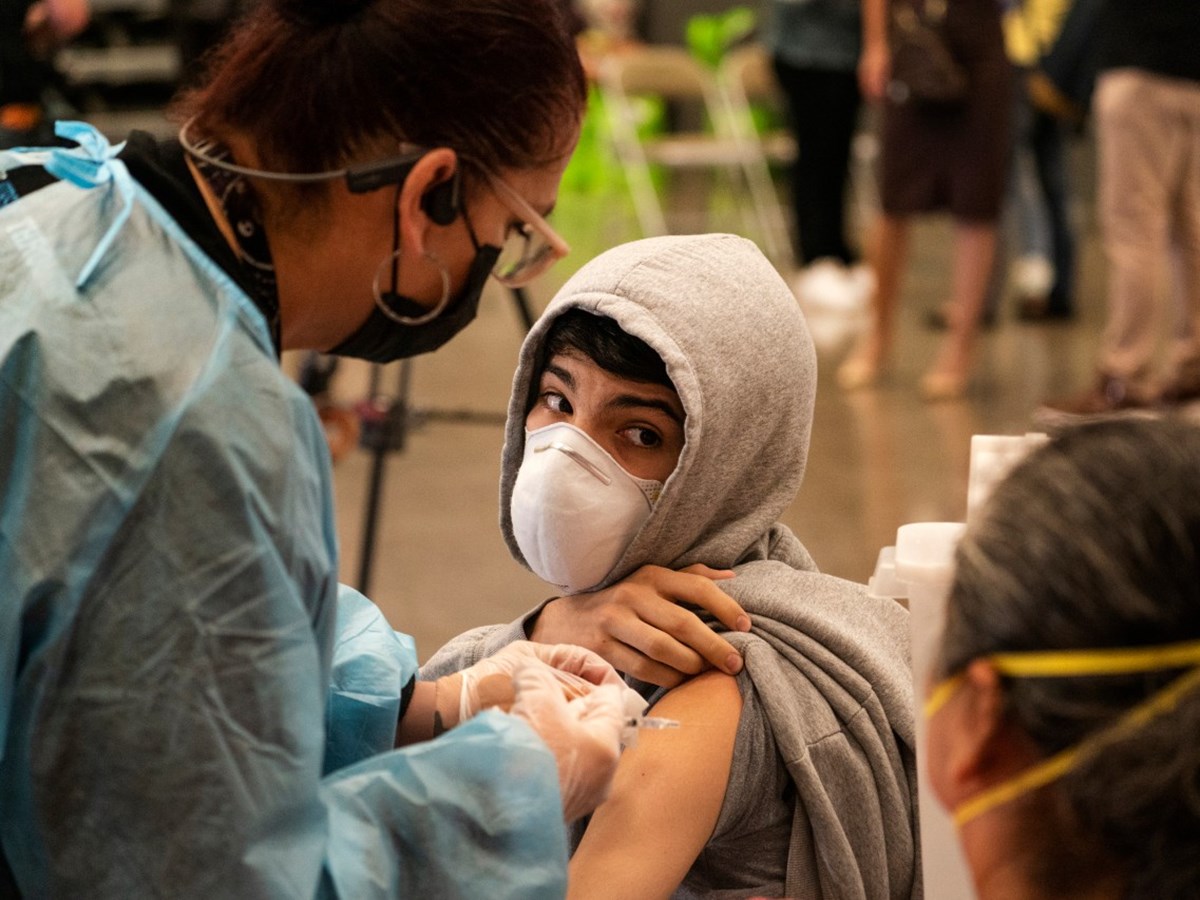 In this May 24, 2021, file photo, a student looks back at his mother as he is vaccinated at a school-based COVID-19 vaccination clinic for students 12 and older in San Pedro, Calif.

When the Culver City Unified School District announced in August it would require all eligible students to be vaccinated against COVID-19, the announcement was met with overwhelming support from the surrounding Los Angeles County community.

But as other schools across California have announced similar mandates in recent weeks, questions have emerged about whether individual districts can legally require public schoolchildren to receive COVID-19 shots, spurring opposition.

The Los Angeles Unified School District saw protesters when its board voted to mandate COVID-19 shots for students over 12 years of age on Sept. 9. The vote led to claims online that the district did not have the legal authority to require vaccinations. Last week, a crowd of parents holding signs with slogans like “My child, my choice” gathered outside a high school in Glendale, even though the school currently has no COVID-19 vaccination mandate in place for pupils.

Experts say previous legal rulings indicate that schools can generally mandate vaccinations for students and employees. But in California, where the state Legislature has already passed laws on student vaccination mandates, it’s unclear how much latitude districts might have to require schoolchildren to get the shot.

Legal scholars expect that the courts will have to work out the details. In the meantime, here’s what we know.

Leslie Jacobs, a professor of constitutional law at McGeorge School of Law in Sacramento and director of the Capital Center for Law & Policy, said legal scholars “always” expect to see constitutional challenges to vaccine mandates.

But in the case of school vaccination mandates, she said those challenges “should not be strong” and are unlikely to succeed in court given past rulings.

Government entities like schools and the U.S. Army have historically been able to require vaccinations based on legal precedent set by Jacobson v. Massachusetts in 1905.

At the time, Massachusetts law empowered local health boards to enforce mandatory, free vaccinations for adults if it was deemed crucial to the health and safety of the surrounding community. Adults who refused to get vaccinated faced a $5 fine.

During a smallpox outbreak in 1902, the city of Cambridge mandated the vaccination of all of its residents. One resident, Henning Jacobson, refused, sparking a case that eventually went before the U.S. Supreme Court.

The court upheld the vaccination requirement. That decision firmly established the power of states and other government entities to enforce compulsory vaccinations in the interest of public health, according to legal scholars.

"A community has the right to protect itself against an epidemic of disease which threatens the safety of its members," Justice John Marshall Harlan wrote in the majority opinion in the case.

For decades, California has mandated vaccinations against measles, mumps, rubella, diphtheria, hepatitis B, influenza type B, polio, whooping cough, tetanus and chickenpox. But passage of the law removed personal belief exemptions, giving California one of the toughest vaccination mandates in the nation. Without a medical exemption, the only way parents could opt out of vaccinating their children was to home-school them or enroll them in an independent study program without classroom instruction.

The law raises several legal concerns for school districts currently mandating COVID-19 vaccinations for students. Dorit Reiss, a professor of law at UC Hastings in San Francisco and a member of the Vaccine Working Group on Ethics and Policy, said the law can be interpreted as a minimum standard that schools must follow and noted that one clause in the legislation gives districts “broad authority” to act in ways that do not conflict with the law.

However, Reiss said legal challenges could stem from the fact that state law does not lay out any sort of formal process for individual districts to add vaccination requirements.

“The argument is that because the state has extensively regulated this area, the state has occupied it, and districts cannot deviate from state law at will,” Reiss said. “The broad school immunization law covers it, and there is no room for local action.”

So far, just a handful of California school districts have mandated COVID-19 shots for students.

Culver City and Los Angeles Unified are the two largest districts to do so in Southern California. Neither are currently offering personal belief exemptions.

When Culver City Unified announced its vaccination mandate, Superintendent Quoc Tran told EdSource that he believed the requirement was legally sound. He said school officials did not ask district lawyers to look at the policy.

A spokesperson for Los Angeles Unified declined to comment on the school’s legal authority for this article, and a spokesperson for Oakland Unified said they could not discuss legal specifics with PolitiFact California as the school believes “there is the possibility of litigation on this topic.”

If school districts get challenged in court, Jacobs, with the McGeorge School of Law, said a judge could issue an emergency order to halt vaccination requirements as the case moves through the legal system.

It’s also possible that districts soon won’t be making the vaccination rules in classrooms across the Golden State. During a media briefing last week, California Health and Human Services Secretary Dr. Mark Ghaly said officials are considering a statewide requirement, although no definitive decision has been made.

Gov. Gavin Newsom on Tuesday said school mandates are “still on the table.”

In the meantime, whether or not California school districts can independently require students to get vaccinated will likely be fought out in the courts.

That process may be repeated across the country as districts in other places confront their own state laws on vaccinations in schools.

“State law controls,” Jacobs said. “It will be up to a court to look at these sources of state law to determine what's happening.”

Email interview with Dorit Reiss, a professor of law at UC Hastings and a member of the Vaccine Working Group on Ethics and Policy, Sept. 23, 2021

Zoom interview with Leslie Jacobs, a professor of constitutional law at McGeorge School of Law and director of the Capital Center for Law & Policy, Sept. 23, 2021

The Los Angeles Times, Culver City Unified to require student COVID-19 vaccinations, in what may be a first, Aug. 18, 2021