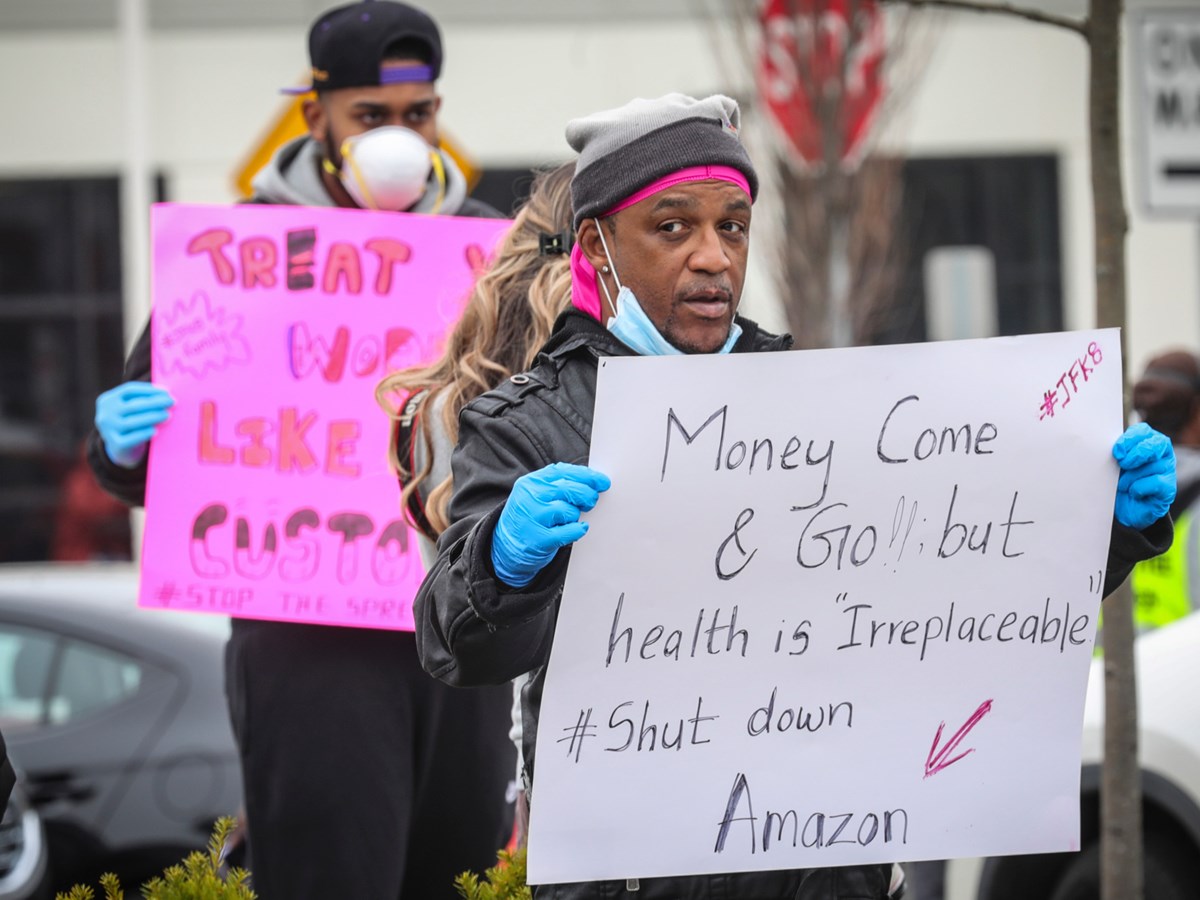 In this March 30, 2020 file photograph, workers from an Amazon fulfillment center in Staten Island, N.Y., protest conditions over fears COVID-19 virus spread, at the company's warehouse in New York.

California has become the first state to implement a law that addresses working conditions for warehouse workers, like those for Amazon and other major companies.

Democratic Gov. Gavin Newsom signed AB 701, which takes effect in the new year, into law on Wednesday. The law aims to address the impact of quotas on worker injuries and health.

It establishes new standards for companies to make clear to warehouse staff what their production quotas are. The legislation ensures workers cannot be fired or retaliated against for failing to meet an unsafe quota.

"We cannot allow corporations to put profit over people. The hardworking warehouse employees who have helped sustain us during these unprecedented times should not have to risk injury or face punishment as a result of exploitative quotas that violate basic health and safety," Newsom said in a statement.

"I'm proud to sign this legislation giving them the dignity, respect and safety they deserve and advancing California's leadership at the forefront of workplace safety."

Under this law, the state Labor Commission is given the authority to issue citations to companies in violation. The department is also allowed to access workers' compensation data to find facilities where there are high rates of injury and investigate whether it's due to the use of unsafe quotas.

The law also bars the use of algorithms that track rests and bathroom breaks and specifically prohibits the firing of workers for failing to meet unsafe quotas because they were on a rest or bathroom break or during compliance with health and safety laws.

How does this law zero in on Amazon?

U.S. retail giant Amazon relies heavily on thousands of workers to fill its massive warehouses, also called fulfillment centers. During the pandemic, Americans relied heavily on online shopping for their goods. In turn, the company, the second largest employer in the U.S. behind Walmart, hired thousands of workers and plans to hire an additional 100,000 workers this year.

Workers and labor organizations argue that Amazon's rules at the company's fulfillment centers create an unsafe work environment. Investigations by news organizations and by the labor-backed Strategic Organizing Center have found that the rate of serious injuries at Amazon warehouses has been nearly double the industry average.

Tracked by algorithms, Amazon warehouse workers rush to pack and ship nonstop shopping orders that must be delivered in a matter of hours.

While workers are on the job, Amazon watches their "time off task," which the company says is to monitor for "issues with the tools that people use." But it also works to identify underperforming workers. Too much time off-task and the algorithm flags the workers.

Other stakeholders in the retail space did.

"We are disappointed Governor Newsom signed AB 701, which will exacerbate our current supply chain issues, increase the cost of living for all Californians and eliminate good-paying jobs," Rachel Michelin, president of the California Retailers Association, said in a statement Wednesday.

Michelin said the change will be felt by consumers, even arguing that the shipment of COVID-19 tests from warehouses and distribution centers to hospitals, pharmacies and doctor's offices will be slowed because of the law.

"With California's ports facing record backlogs of ships waiting off the coast and inflation spiking to the fastest pace in 13 years, AB 701 will make matters worse for everyone — creating more back-ordered goods and higher prices for everything from clothes, diapers and food to auto parts, toys and pet supplies," she said.