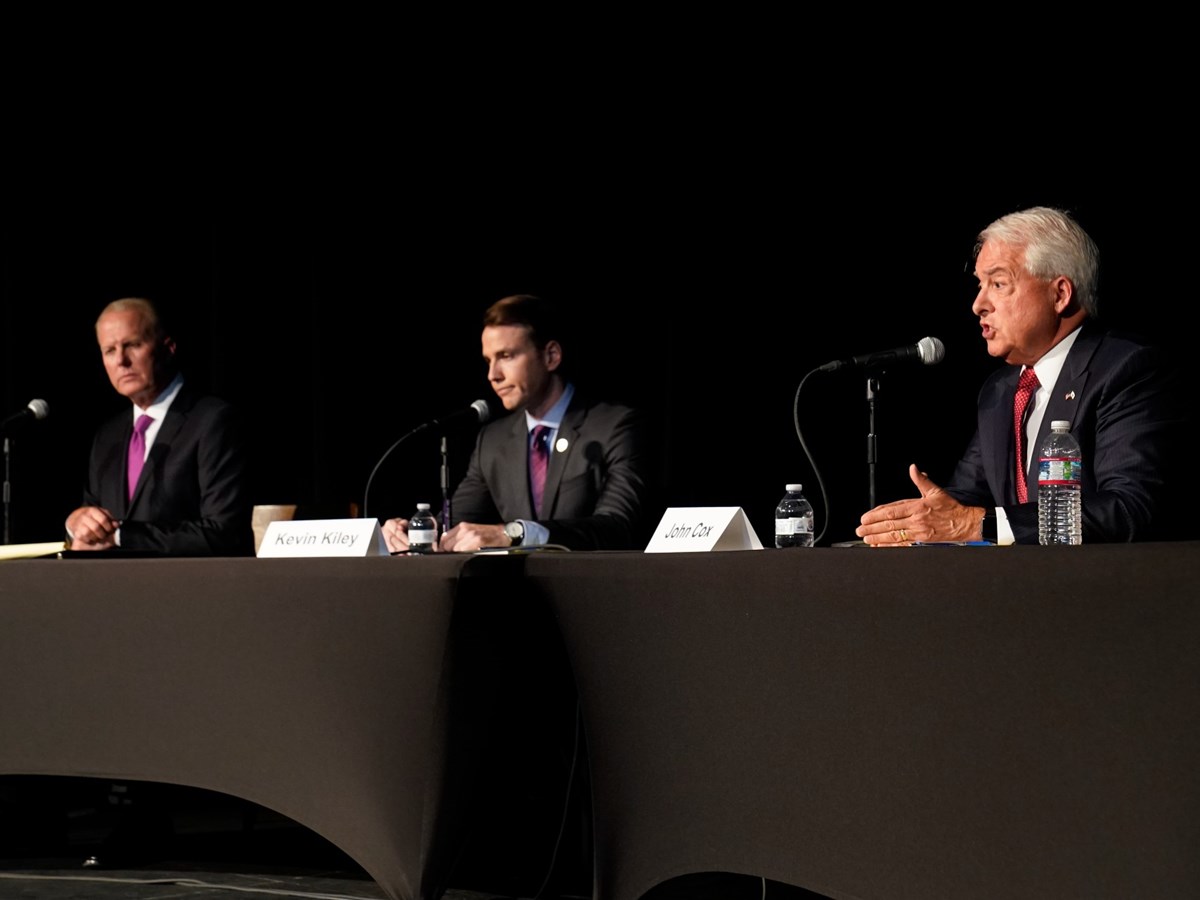 CapRadio will broadcast the full debate Wednesday morning at 9 a.m. Listen on 90.9 FM in Sacramento or stream it online here.

Three of the Republican candidates hoping to replace Gov. Gavin Newsom in next month's recall election met in a debate in Sacramento Tuesday night and used the debate stage to blame the governor for worsening homelessness and wildfires.

Businessman John Cox — who lost to Newsom in 2018 — lamented that many students missed out on an entire year of in-person learning while the governor’s children attended private school.

"The parents found out during this pandemic how little control they have on their own kids’ education," Cox said. "Gavin Newsom had plenty of choice about where his kids went to school."

Only near the end of the debate did former San Diego Mayor Kevin Faulconer attack another Republican candidate. Larry Elder, the GOP frontrunner, has been scrutinized for writing decades ago that women are less politically informed than men.

"He believes that it’s okay to discriminate against women, including pregnant women in the workplace," Faulconer said. "That’s bull*** and we’ve got to call it that."

If Newsom is recalled, his replacement would only serve the remaining year of his term. In his closing statement, Assemblyman Kevin Kiley made the case that voters could use that year as a trial run.

"So take a chance on change, see if things improve," Kiley said. "And if not, you can always vote to return to the way things were in next year’s election. But I think that you will see things improve."

Here's what else you need to know from Tuesday's debate:

Who was there and who wasn't

Gov. Gavin Newsom was invited but declined. GOP candidates Larry Elder and Caitlyn Jenner also declined to attend and have said they will only debate if Newsom does. One former candidate, Doug Ose, was slated to be at the debate but he dropped out of the race yesterday after suffering a heart attack over the weekend.

Cox, Faulconer and Kiley all participated in the first recall debate as well, which was in Southern California a couple weeks ago. Compared to the last debate, the messages from the candidates were more focused.

All three of the candidates on the stage said they oppose statewide mandates on masks in schools and requirements that workers get vaccinated. But they said they’d support local governments who want to require those things.

As expected, they went after Newsom a lot, especially on homelessness and the cost of housing, pointing out that the governor’s promises to build millions of new housing units haven’t come to fruition, and saying that the state needs to do  more to maintain forests so wildfires don’t burn out of control.

At a few different points, they were asked how their plans on say homelesness differ from one another, but none of the three candidates attacked each other.

In an early surprise, John Cox was served a subpoena during his opening statement. Someone walked up to the stage and shouted something about San Diego superior court and slid some documents across the stage to him, then the person was escorted out. Cox didn't answer questions about it after the debate, but the Los Angeles Times is reporting that this stems from some unpaid campaign debt Cox owed from 2018.

Another surprise was that candidates, particularly Kevin Faulconer, attacked the Republican frontrunner Larry Elder. Even after the debate, Faulconer stood by his assertion that the conservative talk radio host’s views on women are “indefensible.” He suggested those comments are why Elder is not coming to the debates.

“If you’re going to take those positions, take them and stand up and defend them,” he said. “But to have them and not come to defend them, I think Californians deserve better. That’s what debates are all about.”

All three candidates said they disagree with Elder’s position that the minimum wage should start at $0 an hour,  something he told McClatchy Newspapers recently.