Pastor Alex Vaiz stands outside what used to be the site of Vida Church in North Sacramento, Thursday, July 22, 2021.

This investigation was produced in partnership with Reveal and NPR’s California Newsroom.

On an empty street corner in old north Sacramento, Pastor Alex Vaiz remembers the church he used to run. He tells stories about lively harvest festivals that drew hundreds of people, and City Council debates his church hosted inside a warehouse-like building.

Vaiz used to run Vida Church, a mostly Latino, immigrant-serving church in this underserved part of the city. But the pandemic was hard on his church. Parishioners lost their jobs and stopped giving, in-person attendance did not lead to online viewership when government-mandated lock-downs closed houses of worship. In April 2020, they lost their lease. In February of this year, Vaiz and his wife gave their final Vida Church sermon and shuttered for good.

“Our budget just fell all the way, 60 percent, and it just continued to go further,” Vaiz said.

The closure was painful, because connection — what he sees as the center of worship — was more important than ever during the pandemic.

Vida Church is like many churches in neighborhoods that have a high proportion of people of color, and in particular those with large numbers of Latino residents. A massive federal lending effort, the Paycheck Protection Program was designed to help religious institutions. But an analysis by CapRadio and NPR’s California Newsroom found that in Sacramento, at least, those funds largely bypassed churches in diverse communities like north Sacramento, with relief dollars flowing primarily to neighborhoods where white residents predominate.

Religious institutions in neighborhoods that are majority people of color, like Vida Church, got just $7 million in loans from the federal government, while churches in white majority neighborhoods got nearly $20 million.

Vida Church didn’t even apply. It had no one on staff to handle an application, and they heard that they were eligible too late in the year. Latino and Asian churches faced language barriers that deterred them from applying, and many smaller churches serving people of color lacked the computers and scanners they needed to send financial documents quickly to banks. Some business owners also worried about taking out a loan in the middle of an economic crisis.

Should Banks Have Done More?

The Small Business Administration, the government agency in charge of distributing PPP dollars, declined to be interviewed for this story. Instead, the agency sent a statement, saying it was “deeply committed to getting funds into the hands of struggling small business owners as quickly as possible and to ensuring the economic aid is accessible to all that are eligible.”

A representative of the the California Bankers Association, an industry trade group, told CapRadio and NPR’s California Newsroom that our analysis did not prove systemic discrimination.

“I don’t think that all speaks to characterizing a bank’s intentions or, with respect to especially racism,” said the organization’s spokeswoman Beth Mills, who added that the banks did outreach to all communities.

“There couldn’t be a stronger advocate for equality and serving everybody that needs to be served to promote economic growth and vitality within their own households,” she said.

Churches In Underserved Neighborhoods: More Than A Place To Worship 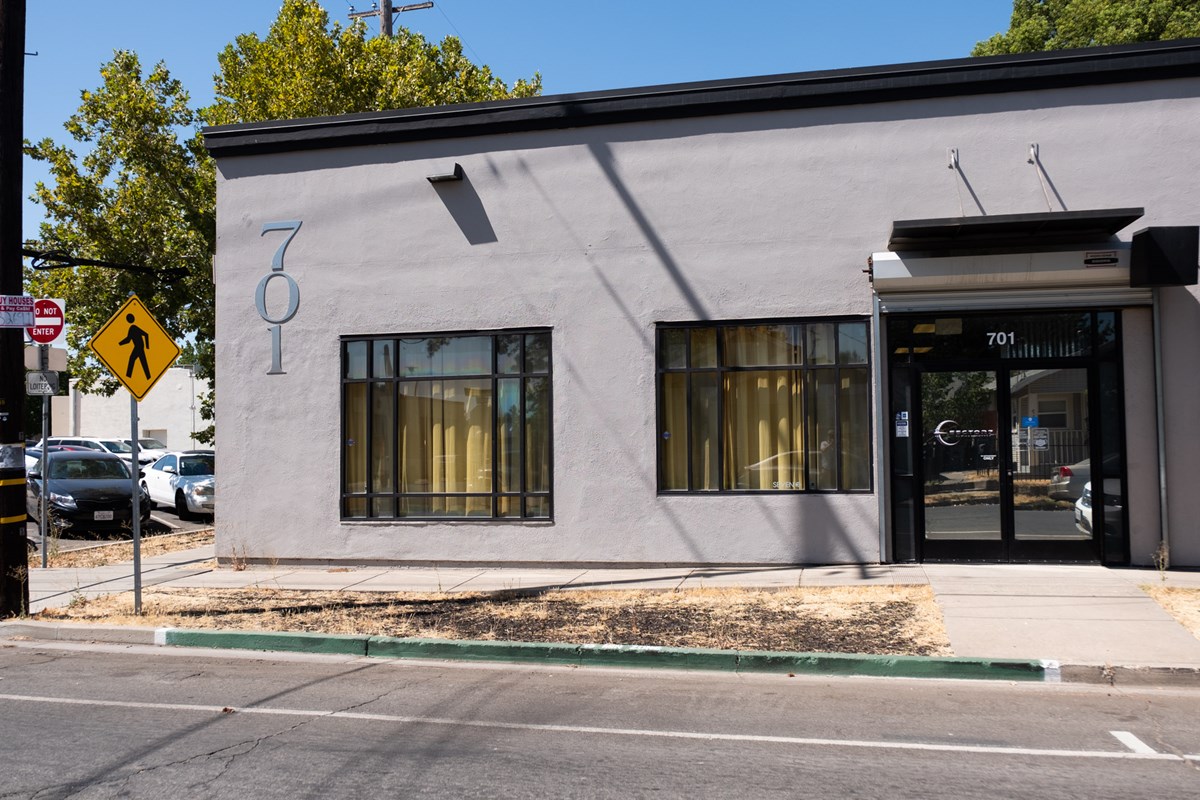 The former site of Vida Church in Sacramento now has a new tenant.Andrew Nixon / CapRadio

For Pastor Vaiz, Vida Church represented a special calling. They ran a food bank and held events for the community. Many members of his congregation were recent immigrants. Claudia Ramos-Chile attended Vida Church for 13 years and said it felt like a home away from home for her.

“The same feeling I had leaving my family and friends 30 years ago in El Salvador, feeling homesick about it, that’s the way it felt, it felt like I left my family,” Ramos-Chile said. “It’s painful not to gather, not to have that community with them.”

Vida Church isn’t the only Latino-led church that suffered during the pandemic. Gabby Trejo, executive director of nonprofit Sacramento Area Congregations Together, said Latino-led churches in particular missed out on these federal loans.

“The Latino faith leaders, they lead much smaller congregations and are having to be the admin, the pastor, the counselor, the everything,” Trejo said. “It might have been more difficult for them to actually access these loans and be thinking about those loans as they were also serving families and individuals.”

Trejo adds that a lot of Latino-led congregations also didn’t have big staff or a financial team to help them apply for the Paycheck Protection Program. Even though the application was fairly short, Vaiz and other leaders of Black, Latino and Asian congregations worried it would be a complicated government program.

But for churches in majority white neighborhoods, the story of how loans were distributed looks very different.

Capitol Christian Center, a megachurch with a sprawling lawn and a large fountain at the entrance, is located in the majority white neighborhood of Rosemont. It received one of the largest federal loans given to any religious institution in Sacramento: $1.7 million.

Laine Alves, one of the pastors at Capital Christian, said the loan helped keep employees on payroll and even allowed it to make some new hires.

“We hired a new worship leader during COVID. He just started in February of this year actually,” she said. “The church is here to support in all ways, we say we’re made up physically, spiritually, socially and academically.”

With the help of the federal aid, Capital Christian’s K-12 school was able to safely re-open during the pandemic, a “huge win” for them, Alves added.

Capital Christian has hundreds of employees on their payroll and a full financial team that handled their Paycheck Protection Program application. While the loan has helped their church grow during a difficult time, it’s also helped them continue their community service work, like a monthly food drive for parishioners.

Because they were able to meet the federal government’s criteria for using the money, their loan was completely forgiven.

The Table at Central United Methodist Church in East Sacramento received a more modest amount than Capital Christian, about $47,000, but even they mentioned having had on-staff accountants who helped shepherd the application through.

“It helped us keep the musicians on payroll. We also have a nominal small maintenance crew. And it was wonderful to have, because otherwise you have a situation where, you know, folks are going to have to look at options,” said Bob Martinez, a board member of The Table.

He said that while church donations did not decrease for his congregation, they were still grateful for the help the loan gave them.

“We were very lucky, the contributions continued, the membership continued,” he said.

Redlining And Its Lasting Legacy

Some experts see the distribution of Paycheck Protection Program loans as a continuation of the legacy of redlining.

Redlining is a racist lending practice where federal government employees drew lines on maps and shaded in red neighborhoods where people of color lived, to signify these areas were too “hazardous” to lend in.

“If you were to overlay a redlining map with a PPP loan map, you see the same kind of serial harm happening time and time again,” said Paulina Gonzalez-Brito, executive director of the California Reinvestment Coalition. Her organization helps communities of color connect with banking institutions.

On redlining maps from the 1930s, the area around Vida Church was shaded yellow, which means “definitely declining.” Government planners warned they were concerned about the neighborhood being “infiltrated” by immigrants from Portugal and the presence of “1 or 2 Negro families.” In 2020, very few places of worship in this neighborhood received PPP loans.

If you were to overlay a redlining map with a PPP loan map, you see the same kind of serial harm happening time and time again.

Gonzalez-Brito says it’s no coincidence that religious institutions in this area received very few federal loans, while white neighborhoods got the majority of this money.

She added that this legacy of discrimintaion puts the burden of responsibility on banks today.

“The government or banks will say that these things just happen accidentally, that they're not in any way the way that they design programs, whether at the government level or at the financial institution level. And it's a way of washing their hands of responsibility,” Gonzalez-Brito said. “The way that discrimination happens or racism happens, it’s never by accident, it’s either by design or it’s baked into the system for generations.”

Pastor Alex Vaiz said he’s currently trying to get funding to reopen Vida Church in the fall. Standing outside his former church, the memories flood back.

“We’d use all of that space for large Halloween events, we’d fill it up with jump houses, it was really neat because people would come out from the community and be able to hang out with us,” Vaiz said. “Lot of things, lot of memories.”

His church is looking to become a part of the Presbyterian Diocese and to open up in a new building in the fall. Until then, they’ll be holding services in peoples’ homes as they search for a more permanent location.

This story was completed with information from Reveal’s Reporting Networks. revealnews.org/network.