The following is a transcript of Randol White’s story on dress codes post-pandemic, and a bit on the history of workplace fashion and clothing requirements.

Devin Yamanaka: Joining us now is afternoon news anchor Randol White. And Randol, I can’t help but notice that you’re wearing a CapRadio polo and jeans. But, prior to the pandemic, you’d usually wear a button-down with slacks, a little more formal, so what’s going on here?

Randol White: Right, true, Devin. I have become a little more casual with my workplace attire, but still trying to stay on brand and within the CapRadio dress code. There’ve been so few of us in the building over the past 16 months that comfort won out over presentation, for sure.

Devin: That explains the Aloha shirt that one time.

Randol: Yes, but, like many other worksites, CapRadio is slowly bringing staff back into the station and so pre-pandemic office attire could return here as well as at so many other businesses and offices.

To get a sense of what people in the clothing industry are seeing and expecting, I reached out to R. Douglas Clothier in Downtown Sacramento.

This place sells fitted, high-end suits and built its reputation on outfitting politicians.

The store’s founder, Ryan — the “R: in R. Douglas — says demand definitely took a dip during the stay-at-home orders, but that’s changed a lot!

Ryan Douglas: I’m actually surprised at how quickly we’ve resumed. We’re busier than we ever were before, pre-pandemic.

Chad Scott: So, Bryan, I’m going to have you stand in the middle of this light-grey square and just face the front mirror for me. And just stand nice and relaxed. I’ll start with your shoulder slopes.

Bryan: I’m here to get a suit ’cause I’m getting married at the end of August.

Randol: Congratulations! Did you put the wedding off because of COVID?

Bryan: I did, yeah, we canceled our wedding last summer, so, yeah.

Randol: You see, business customers haven’t yet returned in large numbers, but people planning big social occasions, like weddings, have.

Ryan: Basically the last year-and-a-half to two years of those not being able to celebrate in that way are now able to share in that experience.

Randol: And there’s another force driving some of Ryan’s business: alterations. 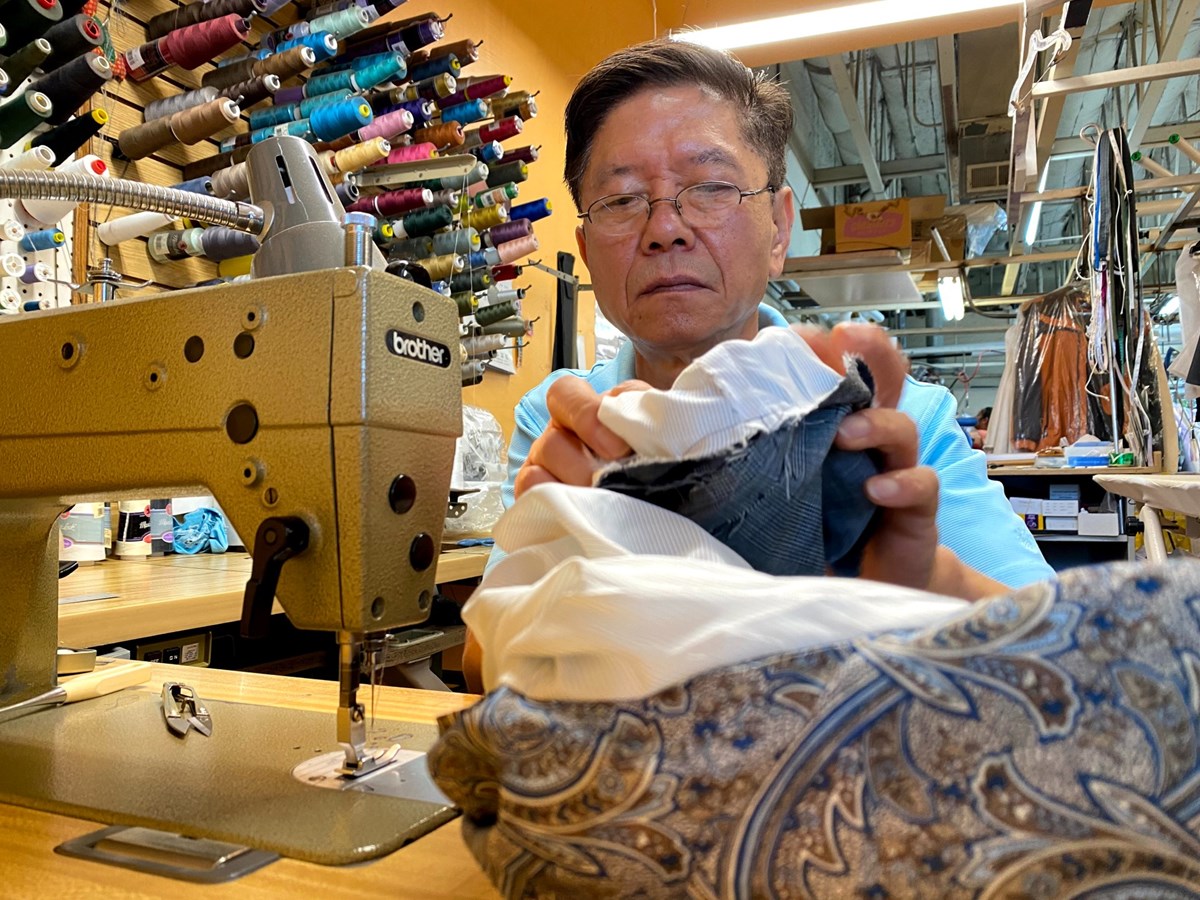 You see — and how to put this gently — people’s bodies have changed since the arrival of COVID-19. According to a study out of UC San Francisco, the average person gained about one-and-a-half pounds per month during the pandemic.

The sewing machine you hear is John Chang’s. He’s the owner of Tailor John’s Cleaners in Elk Grove and is the go-to man for alterations at R. Douglas. Chang says during the stay-at-home orders, his business was very slow, but now:

Randol: Always busy! And that will likely pick up as more people shift from remote to in-person work environments and need their old business clothes to fit again.

Pre-pandemic, suits were mostly made of wool.

Ryan: Now you’re finding four-way active stretch suits that can accommodate a little bit different lifestyle, a little more comfort. Yeah, people are experimenting with, um, when maybe the two-piece formal suit was kind of the routine, now it’s more of a blazer and slacks, no tie.

Randol: And Devin, Ryan says he’s seeing this in the financial and legal industries and even a bit in the political arena.

Devin: Does Ryan’s experience as a high-end clothier match what those in the general fashion industry are seeing?

Randol: The quick answer is: yes. Take it from this woman.

Dyanne Marte: I am Dyanne Marte. I’m the department chair of fashion at American River College.

Dyanne: Everything is a little bit more comfortable. There’s a lot of stretch in everything. It’s less constricting. We’re not seeing, like, wool suits everywhere. We’re seeing synthetics, but synthetics that are breathable.

Randol: She calls this style “athleisure,” some of which can be very business oriented. Think four-way stretch button down, collared shirts and yoga pants that look like slacks.

Professor Marte says California is helping to set the trend for this look nationally and even more so on the production and supplier-side level.

Devin: These styles are for both men and women?

Dyanne: It’s actually a very exciting time. I’ve been conducting research on this and, you know, we have different populations, right. So we have non-binary populations. And, there’s an explosion of lines that are geared toward that specific market, which is great.

Randol: Devin, this is a great time to talk about gender and dress codes, and how the law in California fits into it all.

I spoke with employment law attorney Wendy Musell who says:

Wendy Mussell: As a general matter, an employer can require dress codes. There are some legal limitations as to these areas.

Randol: Like, you can’t discriminate against a worker based on a protected category, including sex or gender identity, race and religion. But otherwise, she says the employer can set the rules.

Wendy: So, if they say that you’re, you know, walking barefoot or wearing your Tevas or with socks, they can still say “No, that’s a no-go,” as long as it is applied to everyone equally.

Devin: But that wasn’t always the case. Not that long ago, an employer in California could require a woman to wear a dress to work, right?

Randol: That’s right, Devin — within both of our lifetimes! Here’s what Wendy Musell had to say regarding that.

Wendy: Only in 1994 under Governor [Pete] Wilson was there a law that indicated that women had the right to wear pants.

Randol: Devin, when you start peeling away the layers of history regarding dress codes you uncover that they were often used as a tool to keep marginalized groups from achieving success.

Richard Thompson Ford is a professor at Stanford Law School and the author of the book Dress Codes: How the Laws of Fashion Made History.

In terms of what women were once required to wear, he says:

Richard Thompson Ford: I think it’s fair to say that this was not only a regulation of women’s sexuality and moral virtue, but it also effectively was a way to exclude women from traditionally masculine jobs. Jobs that were the most well-paid and the most proximate to power.

Devin: I’m guessing it wasn’t just women. What did Professor Ford have to say about race and dress codes?

Randol: He says for much of U.S. history, professional attire has reflected clothing styles most suitable to white people.

Richard: This is something that has a complex history in racial liberation struggles but one of the places where it’s most obviously articulated is in the context of the “Black is Beautiful” movement where racial justice activists made quite explicit the idea that in order to really achieve racial liberation, one needed liberation from what would be described as caucasian standards of beauty or caucasian standards of professionalism and arguably this concern continues to animate some disputes around workplace dress codes today.

Randol: And, since he’s a law professor, he did point out that just last year the Crown Act went into effect in California which bans discrimination of employees over hairstyles including braids, locks and twists.

Devin: So, to wrap this up, Randol, how are companies adjusting to the move toward more casual dress?

Randol: Well, I reached out to some of the area’s largest employers including Intel in Folsom. Spokeswoman Anna Ballard says the company doesn’t actually have a formal dress code, but most employees use the business-casual standard.

Anna: This is the way we dressed before the pandemic, and this is what we expect our employees will continue to wear when they come back into the office.

Randol: And here at CapRadio, we have a dress code in the employee handbook, but it’s in the process of being updated, so the jury is still out. And that might be the case at so many businesses now.

Devin: Randol White, thanks for including me in the conversation.

Randol: Always great to chat with you Devin.

Correction: A previous version of this story misspelled the names of Dyanne Marte and Bryan Holmes.