Low-Wage Workers In California Can’t Afford To Take Family Leave. This Bill Seeks To Change That. 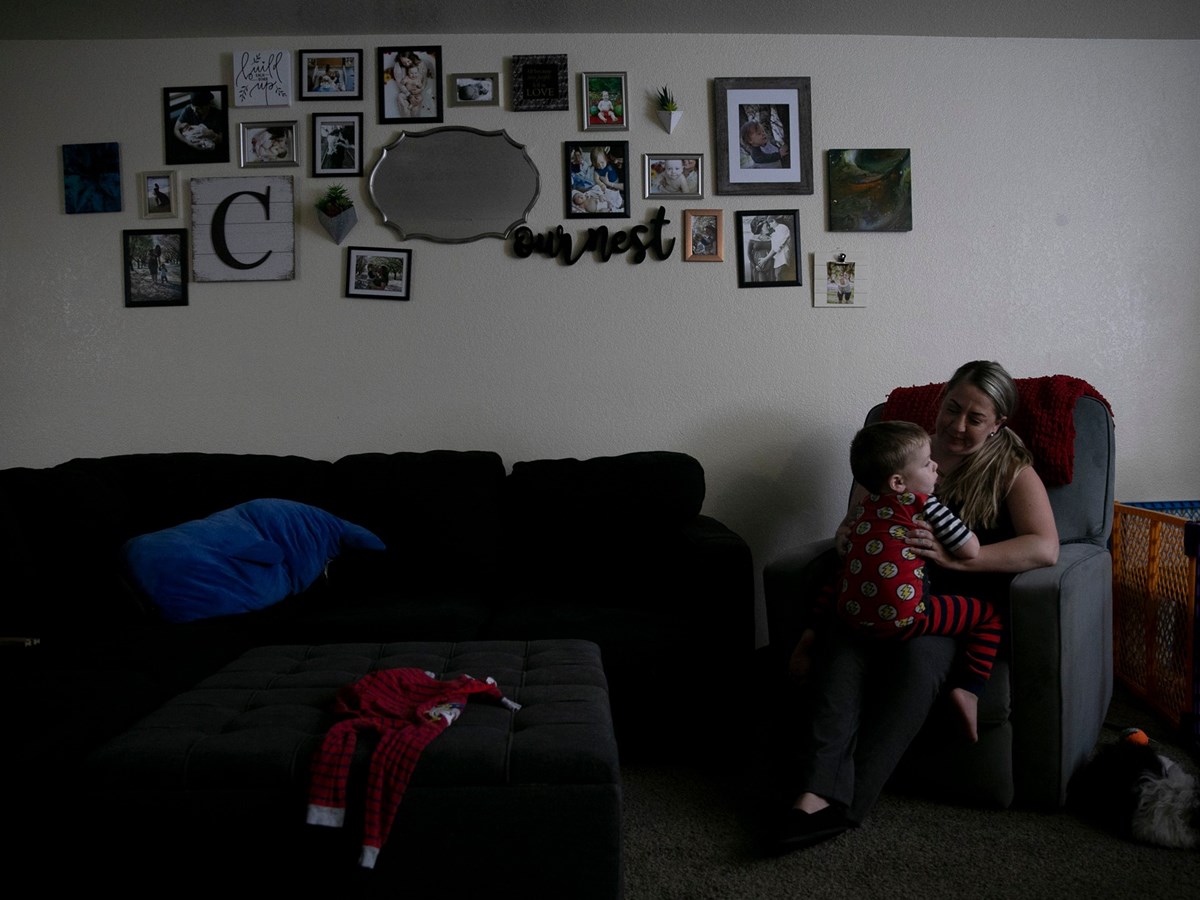 Miranda Griswold cuddles her three-year-old, Rhys, before bedtime at their Merced home on July 8, 2021. “Six weeks is nothing,” Griswold said of the current family leave allotment.

Miranda Griswold and her partner were thrilled to grow their family when they had their first child in 2018. The less thrilling part: adding baby costs to their existing expenses — alimony payments, student loans and credit card bills.

Griswold had a C-section and her doctor recommended she stay at her Merced home for six weeks of recovery time. Her fiancé, who works at a commercial printing press, returned to work after one week of vacation because they couldn’t afford for him to take more time off using family leave, which would replace only 60% of his wages.

“There was no way we could make that percentage work,” said Griswold.

That’s the case for many workers in California. Assemblywoman Lorena Gonzalez, a Democrat from San Diego County, authored a bill this year to increase that percentage — making it more realistic for low-income earners to use the leave that they’re required to fund with 1.2% of every paycheck.

Assembly Bill 123, which the Assembly passed on a 65-0 vote in May and is now in the Senate, would increase the wage replacement rate from at least 60% to 90% of a worker’s highest quarterly earnings in the past 18 months.

“I think it is cruel that… we actually deduct the 1.2% from their paycheck and yet we are dangling something that is unattainable if you can’t afford it,” Gonzalez said in an interview.

Under current law, California’s paid family leave is often being used by those who can more easily afford going without full pay.

Workers making less than $20,000 a year filed nearly 48,000 family leave claims in 2019, only slightly more than the 46,000 filed by those earning $100,000 or more a year, according to the state Employment Development Department. And between 2017 and 2019, the number of claims from the lowest-wage workers declined while claims by workers of every other income group increased, with claims from the highest earners rising most of all, by one-third.

AB 123 is the latest in a series of efforts to make paid family leave a more financially realistic option for more employees.

In 2002, California became the first state to adopt a family leave benefit. It was included as an expansion of the state’s disability insurance program, compensating employees who took time off to care for a seriously ill family member or to bond with a new child.

In 2016, then-Assemblymember Jimmy Gomez of Los Angeles authored a bill to increase wage replacements based on income: 70% for those earning below one-third of the state average, and 60% for those who earn more.

In 2019, Gov. Gavin Newsom extended the amount of time employees could take off from six to eight weeks. And last year, he signed a bill authored by Sen. Hannah-Beth Jackson of Santa Barbara, which expanded the law requiring large employers to grant 12 weeks of unpaid leave to any employer with at least five workers.

The wage replacement rates in the 2016 law were due to expire on Jan. 1, 2022. In the budget deal last month between Newsom and the Legislature, the higher rates were extended to Jan. 1, 2023.

The wage replacement of at least 90% was also advocated in a December 2020 report from the California Health and Human Services Agency outlining a revamp of the state’s early learning and child care system.

Jill Thompson, directing attorney of the Audrey Irmas Project for Women and Girls’ Rights at Public Counsel, said she would like to see the higher benefits available for at least the lowest-wage earners.

“I almost feel like low-wage workers are subsidizing the rest of us because they’re paying into the system but not reaping the benefits,” she said.

Now, full-time workers at small businesses making California’s current minimum wage of $13 an hour get $6.24 a week deducted from their paycheck for family leave. Their pay before taxes is $520 a week, which means a weekly benefit of $364 under current law.