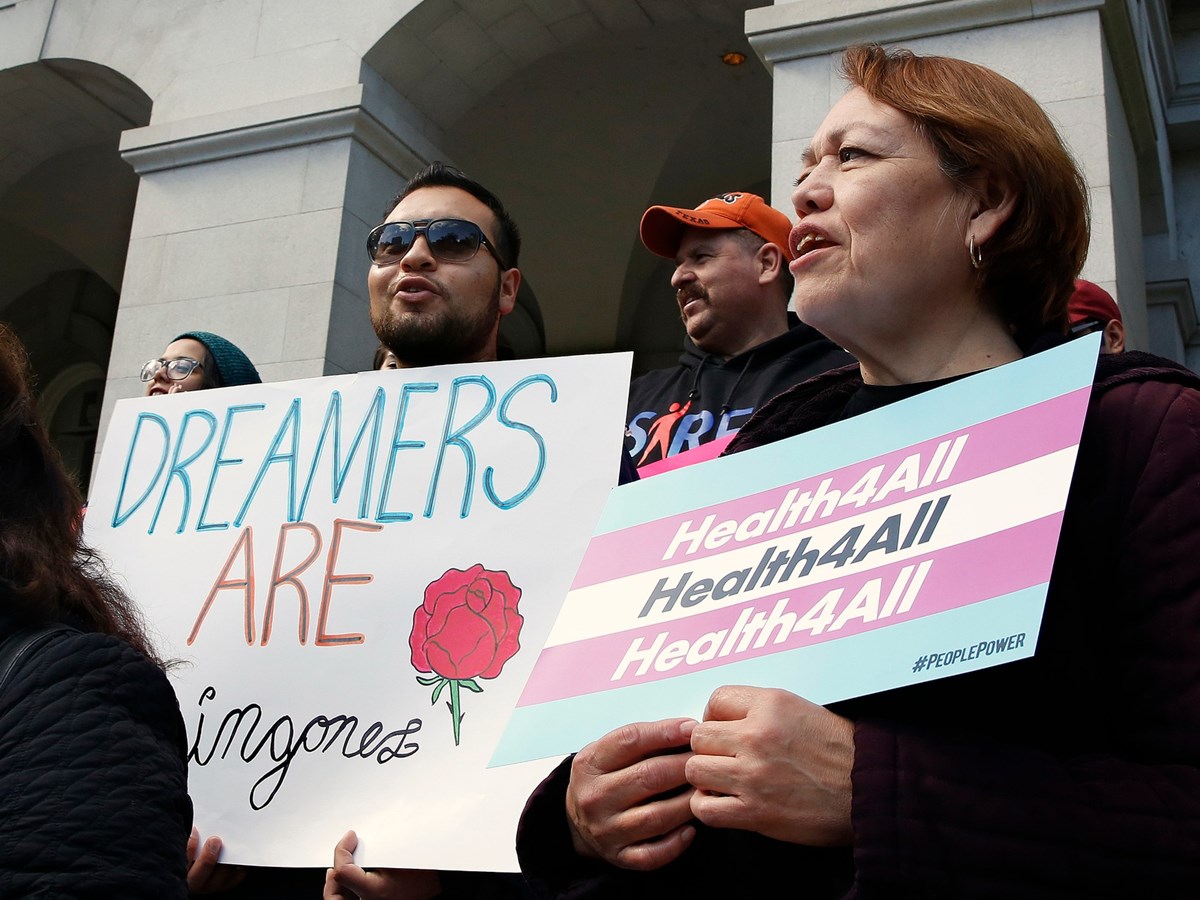 Supporters of proposals to expand California's government-funded health care benefits to undocumented immigrants gathered at the Capitol for the Immigrants Day of Action, Monday, May 20, 2019, in Sacramento.

For 77-year-old Isabel, COVID-19 was not just a theoretical danger. The former Riverside County farmworker says when she contracted the virus in early 2021, she fell severely ill.

“It was the worst time in my life,” she said through a translator. Isabel is undocumented and fears legal repercussions, so CapRadio is using her first name only.

Like many undocumented Californians, she has never had health insurance. So despite the fever, body aches and breathing issues she came down with, she went without medical treatment and instead leaned on herbal teas and other home remedies.

Advocates say the COVID-19 pandemic brought attention to the need for a better safety net for undocumented Californians. This week, Gov. Gavin Newsom and state lawmakers announced a budget plan that would expand Medi-Cal coverage to all income-eligible adults over age 50, regardless of immigration status.

“We have lost not only friends and community members but also family, because of lack of access to health care,” said Luz Gallegos, director of TODEC Legal Center in Southern California. “So this is a big win for all of us here that support this population.”

Newsom’s spending plan sets out $1.3 billion for expanding Medi-Cal to undocumented seniors. The Legislative Analyst’s Office estimates roughly 235,000 seniors will become eligible for the program based on income.

There were other changes to Medi-Cal in the governor’s plan, including removing an “asset test” that made it harder for seniors with a certain amount of savings to qualify for the program. The budget also includes more funding for specialty pharmacy services, doula coverage, community health workers and postpartum care.

The expansion to all seniors over age 50 is a major step in an ongoing fight for universal health care in California. The state moved to provide health care to undocumented children in 2016 and undocumented young adults in 2020. Lawmakers have introduced bills in recent years to make seniors eligible for the program, but those efforts have failed due to budget constraints and Republican opposition.

While 66% of Californians — and 82% of California democrats — say they support providing health coverage to undocumented immigrants, only 20% of Republicans do, according to a March survey from the Public Policy Institute of California.

Opponents of the expansion have cited concerns about finances, and about taxpayer dollars going toward health care for people who enter the state illegally. They’ve also asked what an influx of enrollees would do to a public health system already plagued by physician shortages and long wait times.

“It’s easy to say ‘you’re covered,’ but are we providing what we’re promising for the people who are on this program already?” said Susan Shelley, who wrote a column for the Southern California News Group this week about the Medi-Cal expansion.

In the column, Shelley asked whether the new policy “will be a magnet that draws low-income undocumented immigrants from other states and countries to spend their golden years in California.”

“This is a math question. Of all the priorities, this is one the governor has made a priority,” she continued. “He is accountable for how much it costs and what the total commitment is to the taxpayers.”

Many health policy experts say the extra health care spending is justified because it ensures that the state’s entire population can access care when they need it, which could reduce expensive emergency room visits due to untreated illnesses.

“The appropriate way to look at it is that maintaining the health of our population is a high priority,” said Gerald Kominski, a professor at the UCLA Center for Health Policy Research. “The fact that [undocumented residents] don't have health insurance coverage means that they’re much more vulnerable to illnesses that are preventable, to health expenditures that are preventable.”

While immigration and health advocates say the Medi-Cal expansion to undocumented seniors is an accomplishment, they’ll continue to push for all Californians to be eligible for the program.

Nearly 1.3 million undocumented Californians will remain uninsured in 2022, according to the UC Berkeley Labor Center. This group makes up the largest chunk of the state’s remaining uninsured. Currently, undocumented residents age 26 and over only have access “restricted scope” Medi-Cal, which covers emergency and pregnancy care.

The Legislative Analyst’s Office estimates that ongoing costs for expanding full-scope Medi-Cal coverage to all Californians would be about $2 billion annually.

Only adults over age 50 will be eligible to enroll next spring.

For Isabel, the 77-year-old, getting an insurance card could mean taking care of health issues she’s been letting slide.

“I hope I can hurry up and make an appointment, because I’m losing my eyesight,” she said via a translator.

The budget hasn’t been finalized. Negotiations are expected to continue, and other expenditures may be approved through budget “trailer bills.”

Editor’s note: The state budget passed Monday by the Legislature includes $1 million for CapRadio’s new public performance space in downtown Sacramento. It is one of hundreds of such allocations inserted into the $262 billion budget by individual lawmakers for projects in their districts.