Gov. Gavin Newsom rolled back a more ambitious wildfire prevention plan set by his predecessor, and this week his administration nixed more than half a billion dollars in promised fuel reduction spending, an investigation by CapRadio and NPR’s California Newsroom has found.

Newsom, who is set to talk wildfires with President Joe Biden and governors of other western states Wednesday, has said the reality of climate change with its hot summers and dry winters, means the state’s approach to wildfires “fundamentally has to change.”

Newsom declined to comment for this story. In an interview, his Natural Resources Secretary Wade Crowfoot said that the state was making a “quantum leap” in wildfire prevention under Newsom, but was under no obligation to stick with his predecessor’s timeline.

“I can’t speak to what the last administration was focused on,” he said, or “hypothesize on what the last governor had identified or had targeted.”

The 2025 goal is part of an agreement Newsom reached with President Donald Trump last year, where the state and federal government promised to each perform fuel reduction and prescribed burns across 500,000 acres every year. Responding to inquiries from CapRadio and NPR’s California Newsroom, neither Cal Fire nor the United States Forest Service were able to provide details on progress toward those goals.

In the final budget signed Monday, Newsom and Democratic legislative leaders also pushed hundreds of millions of dollars of planned wildfire prevention spending into the future. Newsom had called for over $700 million for wildfire prevention and resilience in his revised budget in May. The Legislature increased that amount to $1 billion in its budget bill. But the final budget deal includes less than half of that — $458 million over the next year.

Crowfoot said Cal Fire wasn’t ready to spend the money. “We couldn't put all that billion dollars to work on shovel ready projects immediately,” he said.

HD Palmer with the Department of Finance confirmed that despite the need, the state simply wasn’t ready to take on that many projects. Spending a billion dollars on wildfire prevention in a year, he said, would be “like trying to drink water out of a fire hose.”  While substantially less than what Newsom originally promised, the outlay still represents more money than in years past.

The new investigation comes as Newsom already faces criticism for misrepresenting his accomplishments on wildfire prevention.

Last week, CapRadio and NPR’s California Newsroom reported Newsom overstated, by an astounding 690%, the number of acres treated with fuel breaks and prescribed burns in the very projects he said needed to be prioritized to protect the state’s most vulnerable communities. The governor has claimed that 35 “priority projects” carried out as a result of a January 2019 executive order resulted in fire prevention work on 90,000 acres. But the state’s own data show the actual number of acres “treated” through fuel reduction or prescribed burns was 11,399.

The investigation also found that after a spike in mitigation work in Newsom’s first year in office, the number of total acres treated by Cal Fire declined precipitously to below levels achieved during the Brown administration. 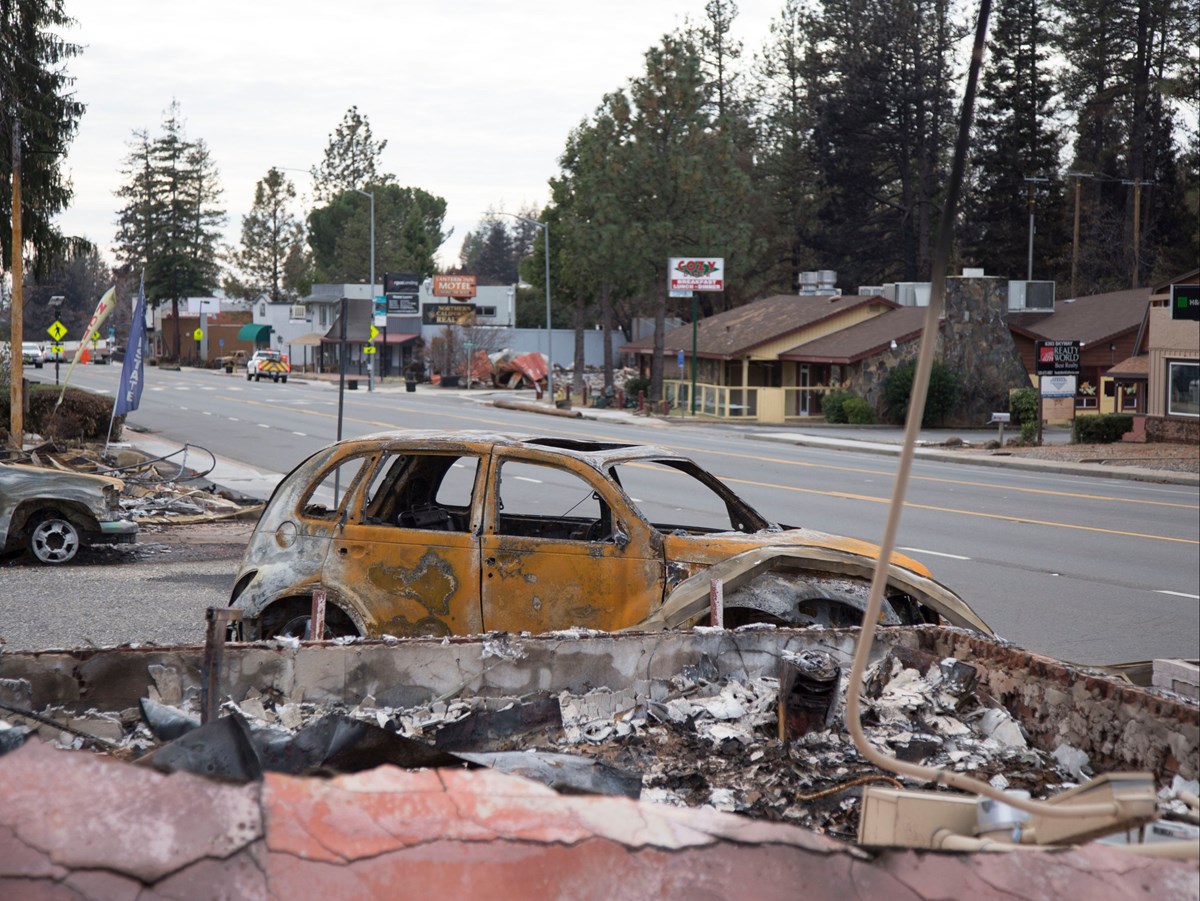 The town of Paradise and areas nearby were devastated by the Camp Fire that started on Nov. 8, 2018 in Butte County.Andrew Nixon / CapRadio

State Sen. Bill Dodd, a Democrat who represents the Napa and Sonoma Valley wine country, which have been ravaged by wildfires in recent years, said he was “not pleased” that the prevention work dropped and was initially “taken aback” by the last-minute budget trim. Dodd said he suspects Cal Fire doesn’t have the capacity to ramp up its prevention work.

“You’ve seen what Cal Fire has been able to get out the door this year, whether it’s prescribed fire or any number of other things,” he said. “And it’s not as quick as we’d like to have it done.”

Republican lawmakers seized on the investigation and demanded oversight hearings. Assemblyman James Gallagher, who represents the fire ravaged city of Paradise, offered amendments to the state budget that would shore up wildfire prevention funding — which were squelched by the Democratic majority.

Gallagher said he was unaware that Newsom pushed back the state’s goal of treating 500,000 acres annually to 2025.

“It’s another example of how the Newsom administration isn’t treating this issue with the urgency that’s needed,” he said.

The Newsom administration and lawmakers say that even though they’ve reduced the wildfire mitigation budget this year, they plan to add an extra half a billion dollars to next year’s budget. By then, they argue, Cal Fire will be better positioned to implement those projects as the state continues to build toward the annual 500,000 acre goal.