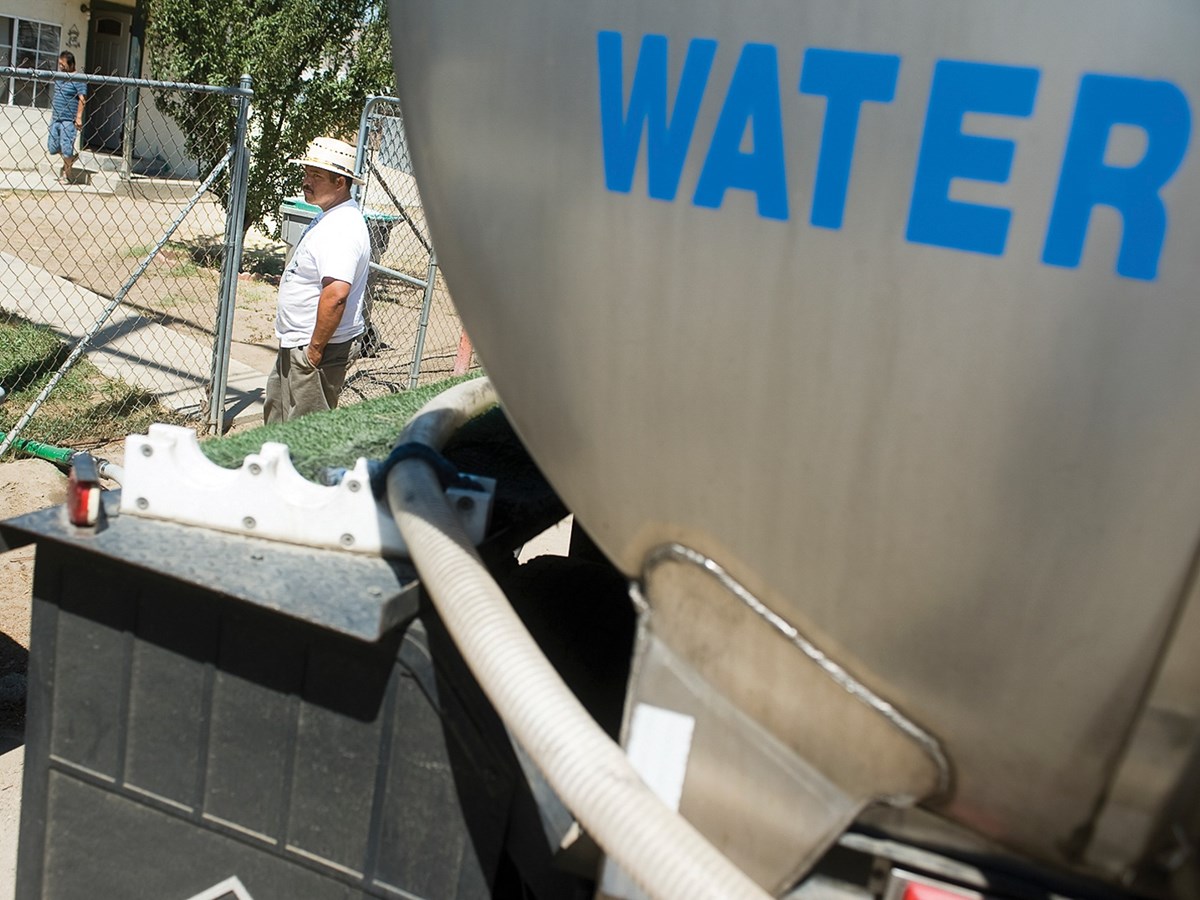 The Porterville Recorder via AP

Rural, low-income Latino communities across California were hardest hit by the last drought and could see drinking water shortages again this year as extreme drought spreads across the state, according to a report released today by non-partisan advisors to California’s lawmakers.

The report from the Legislative Analyst’s Office warns state officials to prepare by ramping up monitoring of wells in vulnerable communities and lining up emergency drinking water supplies to send there.

“The communities most impacted by drinking water challenges during the last drought were small and rural; many were farmworker communities located in California’s Central Valley. Moreover, many of the communities that lost — or remain vulnerable to losing — access to safe drinking water contain high proportions of both lower‑income and Latino residents,” the report says.

The last drought — a record-breaking 2012-2016 event — spanned the driest four consecutive years since record-keeping began in California. The dry weather collided with hot temperatures to suck water from soils, parch plants and create warm, shallow rivers where 95% of the young winter-run Chinook salmon were killed in 2014 and 2015.

Now most of the state is again experiencing extreme drought conditions or worse. Earlier this week, California Gov. Gavin Newsom declared a drought emergency in 39 counties, including most of the parched Central Valley and Klamath River area, bringing the total counties under drought emergencies to 41. Declarations already were announced last month for Mendocino and Sonoma counties due to severe conditions in the Russian River watershed.

The most recent drought didn’t hit Californians evenly, according to the report. Farmers and ranchers fallowed some land and pumped groundwater to make up for dwindling water deliveries from state and federal aqueducts. But residential communities were a different story.

“Some rural residential communities — mainly in the Central Valley — struggled to identify alternative water sources upon which to draw when their domestic wells went dry,” the report said.

Many of these towns were farmworker communities, home to lower-income and Latino residents, who also suffered financially from the drought’s effects on agriculture. Now, in the midst of another drought, the COVID-19 pandemic has piled on them as well.

The legislative analyst advised lawmakers to consider focusing spending and assistance on these vulnerable communities.

“The LAO’s report clearly identifies the challenges faced by rural, vulnerable communities — mostly people of color, located in the Central Valley. These communities are still reeling from the last drought and the Coronavirus,” said State Sen. Anna Caballero, a Democrat from Salinas. “The LAO is absolutely correct in saying that rural communities continue to be hit the hardest, and we need to focus spending and assistance on mitigating the impacts of the drought.”

State officials should pre-position emergency bottled water and tanks in these communities, and also create a clear protocol for people so they know whom to call when their wells go dry, Susana De Anda, executive director of the Community Water Center, told California lawmakers last week.

“We were not ready for the last drought. As a result, we scrambled. The local and state response was uncoordinated. Families didn’t know who to call. And too many went without water for too long,” De Anda said in a statement.

The state isn’t certain how many wells went dry during the last drought: A report from the California Natural Resources Agency tallied 2,600 reports of dry wells received through January 2019, mostly in 2014 and 2015. This is certainly an undercount, however, the report said.

Last time, California spent $3.3 billion to respond to the drought, including $734 million in emergency response. The biggest chunk of the emergency response funding, about $384 million, went towards fire protection.

About half a million dollars a month went towards bulk and bottled water purchases during the peak of the last drought, according to a March report from the California Natural Resources Agency.

Not all of the funding for farmworker communities was “well-targeted,” the Legislative Analyst’s Office said. Some, for instance, went towards a program that offered temporary relocation because of job losses from the drought. But people were uninterested in the program, preferring to stay put or find a more permanent place to settle.

The drought compounds the existing challenges that one million Californians already face finding safe and affordable drinking water, the legislative analyst’s report said. “These conditions worsened during the last drought, when thousands of wells serving residential homes dried up or became affected by contaminants that emerged in the underlying aquifers.”

The report comes on the heels of another state assessment that reported 343 water systems already fail to provide safe and affordable drinking water to Caifornians, and another 617 public water systems are at risk. Addressing the contamination and shortages could take $10.25 billion over the next five years.

This week, Newsom proposed $5.1 billion to respond to the drought and bolster water resilience over the next four years, including $27 million for drinking water emergencies during drought.

“Fortunately, the Senate and now the Administration have put forth significant plans to make investments to repair and modernize our water systems,” said Caballero, who called for more innovation in monitoring and managing water supply projections in the face of climate change.