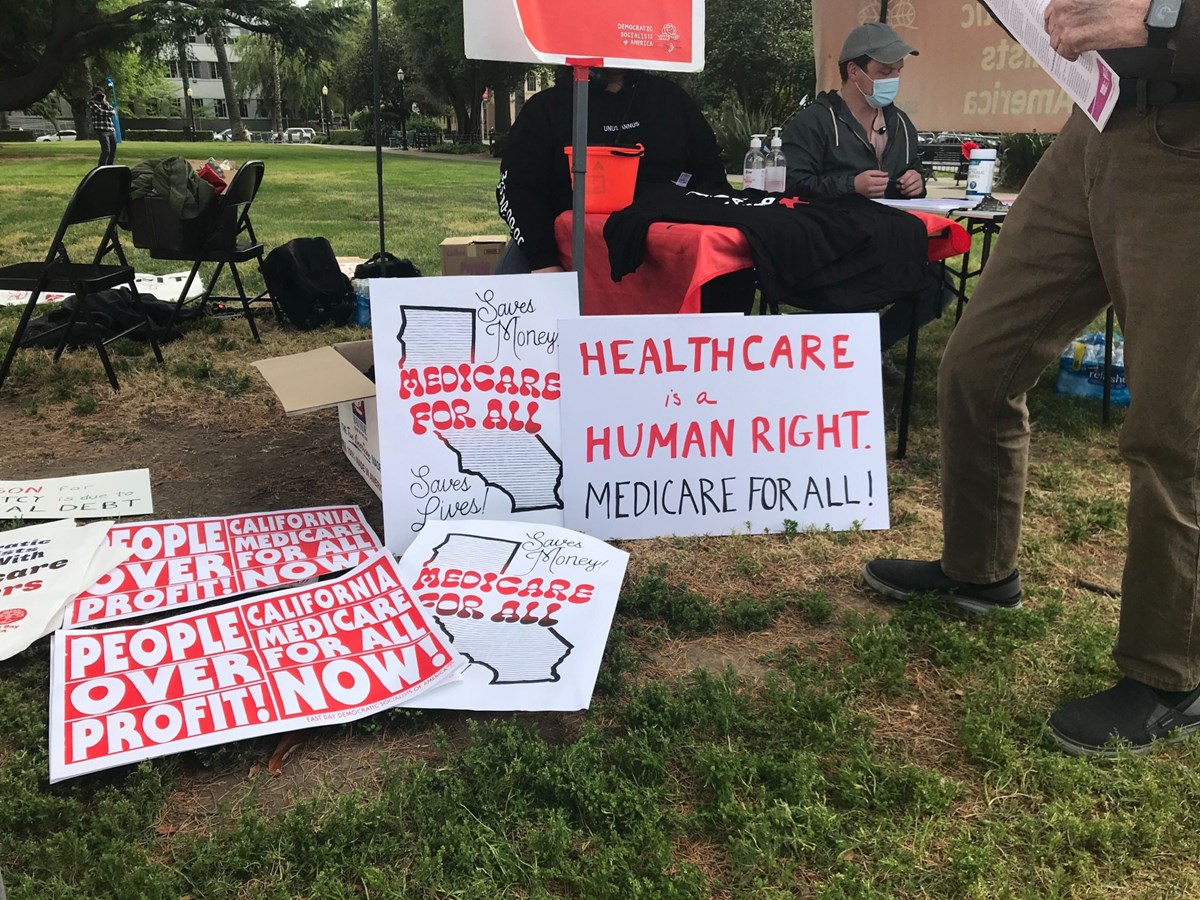 Demonstrators from the Sacramento chapter of the Democratic Socialists of America rallied at the state Capitol to push for single payer health care Monday, April 26, 2021.

Californians who support a single payer health care system say it’s time for Gov. Gavin Newsom to keep his campaign promises and take steps toward making the model a reality.

Calls to move away from private insurance and have the state government take on all health care costs have come and gone during the past four years. But a contingent of progressive advocates, including the prominent labor union California Nurses Association, has continued to push for the change.

“We don’t really have a public health system,” said Shirley Toy, a retired nurse and an organizer with the Sacramento chapter of the Democratic Socialists of America. “Some peoples’ lives seem to count and some peoples’ don’t, and it’s just very sad.”

Critics of single payer have voiced concern about the cost of an overhaul, and contended that getting everyone covered won’t ensure they have timely and equitable access to care.

The single payer proposal that proponents put forward this year, Assembly Bill 1400, failed to make it through the Assembly Rules Committee this week and is now a two-year bill, eligible to move in January 2022.

The bill’s backers are now asking Newsom to step up and champion the cause. At a Monday demonstration at the Capitol, they played a recording of Newsom from his 2018 campaign where he promised to “lead the effort to get it done.”

In the clip, Newsom was referring to universal health care — an umbrella term that encompasses single payer, but can also include other models that achieve coverage for all without dismantling the current network of public and private plans.

“The Governor has consistently said that single payer is where we need to be, and it’s a question of how you get there,” said Erin Mellon, a spokesperson for the governor, in an email.

The movement to recall Newsom passed a milestone this week, garnering enough signatures on their petition to move the process forward. Organizers of the effort cite Newsom’s mishandling of the pandemic, as well as housing and homelessness issues, as reasons to remove him from office. The earliest a recall election would happen would be this fall.

Attendees at the Monday rally didn’t explicitly reference the potential recall, but said they wanted to hold the governor accountable.

“So where is he, huh? When are we gonna get it done?” said organizer Andee Sunderland. “We have to think, it is gonna be another year before this bill sees the floor. And Gavin and our democratic representatives need to answer for that to each one of us, and everyone else in the state of California who’s living through a pandemic without health insurance.”

Job loss due to COVID-19 left millions of Americans in need of health care, and advocates say Californians who were uninsured at the start of the pandemic likely avoided seeking needed medical services.

Cadence Chance attended the event to voice support for Medicare-for-All, a version of single payer that would expand the existing federal Medicare program to everyone in California.

“I have bipolar disorder, and without Medicare I’m not sure where in the world I would be,” Chance said. “I think it’s critical that Gavin Newsom lead California and help lead the nation towards a more equitable future.”

Organizations that led the Monday demonstration have also taken to social media with the hashtags “#GavinKeepYourPromise” and “#CADemsDontCare”.

hey @GavinNewsom free political tip!!! if you want to definitely not get recalled, you should make sure the CA leg passes the MEDICARE FOR ALL bill it’s currently debating and then sign that shit into law. if you do that i guarantee you’ll win!!!!!

In January 2020, Newsom convened the Healthy California for All Commission with the goal of providing “coverage and access through a unified financing system, including, but not limited to a single payer financing system,” according to a press release about the launch. The committee last met in August 2020.

But advocates say Newsom hasn’t done enough to make single payer a reality. Speakers at the Monday event say Newsom should be requesting a federal waiver from the Biden administration to allow the state to experiment with a public option. Newsom wrote to the Trump administration requesting this on his first day as governor.

“When it gets right down to it, people realize it would be, in a financial sense, very costly,” she said. “The government is not going to be an efficient provider of health care, and the cost will be higher.”

James Kahn, an emeritus professor of health policy at the University of California, San Francisco who has published studies about the projected cost of a single payer model, says taxes would be higher but overall health spending would actually go down because there would be lower administrative costs.

“If you take the amounts that are currently going through private insurance and what families are contributing, and instead you raise those monies through taxes, then the government’s contribution to health care goes up, but overall spending for health care goes down because the system is so much more efficient.”

Khan says the pandemic highlighted California’s health disparities in an unprecedented way, and he expects the fight for universal coverage to continue.

Health advocates have also emphasized the need to create a more robust health insurance option for undocumented adults, emphasizing the disproportionate impact that COVID-19 had on marginalized communities.

The governor’s commission on universal health care meets again on May 21.