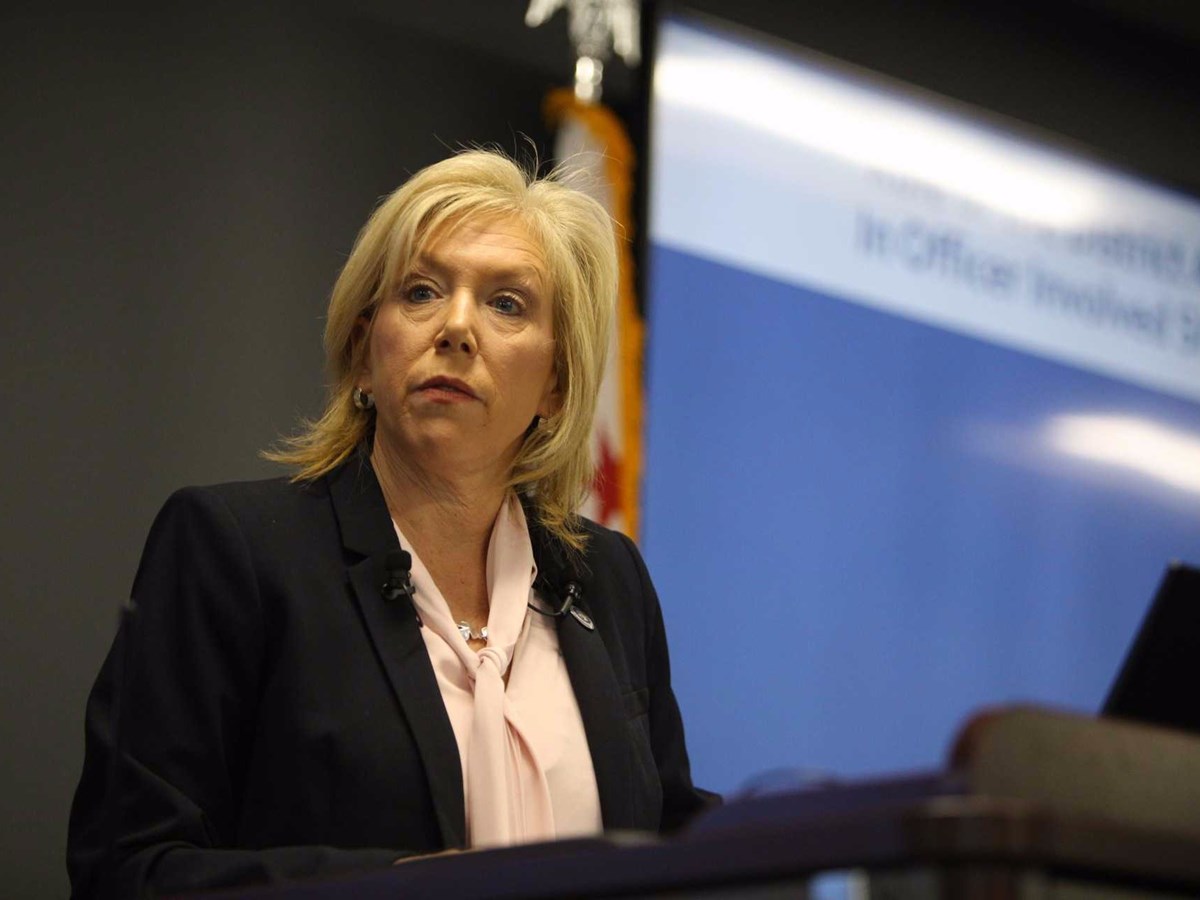 Sacramento County District Attorney Anne-Marie Schubert at a press conference announcing her office's findings in the case of the fatal police shooting of Stephon Clark.

Schubert made her official announcement while standing in front of families of violent crime victims, whose perpetrators she helped lock up during her 30 years as a career prosecutor. She didn’t take long to send shots at her opponent and other progressive prosecutors across California.

“Let me be clear, the newly appointed attorney general has voted for and supported policies and laws that are not only destroying the rights of crime victims, but are destroying public safety in this state,” Schubert said. “Here is the truth: California's criminal justice system is in chaos.”

Bonta was sworn in last Friday to replace Xavier Becerra, who moved on earlier this year to join President Joe Biden’s cabinet as the U.S. Health and Human Services secretary.

Dana Williamson, a political advisor for Bonta, said Schubert’s attacks on the attorney general’s record are “Trumpian lies” by a “tremendously flawed” candidate.

“She has refused to bring excessive force cases and serves as treasurer of an organization that misspent millions meant to prosecute polluters,” Williamson said regarding an ongoing investigation about whether the California District Attorneys Association improperly used money. Schubert is the organization’s secretary-treasurer.

Williamson added: “Now she wants to lead the Department of Justice — the same entity that is investigating her organization's misdeeds.”

The race to be California’s top cop in 2022 will be a contentious battle of firsts. Bonta, a progressive East Bay Democrat, is the state’s first Filipino American attorney general. Schubert would be the first openly gay attorney general.

Beyond that, the two candidates stand in stark contrast to each other.

Schubert is a 57-year-old former Republican, who announced in 2018 after she won re-election that she was registered as No Party Preference. She’s a self-described tough-on-crime candidate who, in recent years, has helped put the Golden State Killer behind bars, pushed for the death penalty in California and investigated the massive fraud case involving the Employment Development Department.

She’s also been criticized for refusing to file charges against Sacramento County police officers who have used deadly force.

Most notably, Schubert said two Sacramento police officers acted lawfully in 2018 when they shot and killed Stephon Clark, an unarmed 22-year-old Black man whose death led to months of massive protests in the city.

Cristine Soto DeBerry, executive director and founder of the progressive Prosecutors Alliance of California, said Schubert’s “dated way of thinking” would lead to overcrowded jails and prisons and “racial disparities that have come to define our system of justice.”

Bonta is a progressive prosecutor who has supported bills to increase police oversight and accountability. In October, he unveiled a proposal to require prosecutors who accept campaign donations from police unions to recuse themselves from investigations into police misconduct.

Bonta has listed criminal justice reform, environmental justice, consumer protection, human trafficking and protecting the rights of immigrants and workers as among his top priorities for the position, which oversees more than 4,500 employees in the state Department of Justice.

He’s been criticized for being too lenient on crime as he pushes to reform the criminal justice system.

Former federal prosecutor Nathan Hochman is also running for the seat as a Republican.

Since 2015, when her office began investigating police use of force, Schubert has reviewed over 40 cases of police killing citizens, but she has never filed charges against those officers.

That includes the investigation into the death of Stephon Clark, a 22-year-old Black father who was killed by two Sacramento police officers in his grandmother’s Meadowview backyard in 2018.

Nearly a year after his death, Schubert held an hour-long press conference detailing the events leading up to Clark’s death. In the end, she said it was clear that Sacramento police officers acted lawfully and did not commit a crime.

Schubert was criticized by local activists, organizers and the Clark family, who accused her of a "smear campaign” after she made public and referenced personal text messages between Stephon Clark and his girlfriend, which suggested that Clark struggled with his mental health in the days before his death.

Then-California Attorney General Becerra also announced that his office would not file criminal charges against the two officers who killed Clark.

The Arrest Of The Golden State Killer

It had been 40 years since Joseph DeAngelo began his spree of rapes and murders across California when Schubert’s office renewed its efforts to capture the man known as the Golden State Killer and East Area Rapist.

That was in 2016. Two years later, Schubert announced an arrest in the case. DeAngelo was connected to at least 12 murders and do rapes in the 1970s and 1980s, more than half of which occurred in the Sacramento region.

“The answer has always been in Sacramento,” Schubert said during a 2018 press conference announcing the arrest. “We all knew we were looking for a needle in a haystack, but we also knew the needle was there.”

Schubert has been credited with leading those efforts.

The investigation used DNA that came from a sample submitted by a relative to a genealogy website, which was then used to match samples in rapes committed decades prior.

California's unemployment department has had massive failures during the pandemic. Schubert has been at the forefront investigating it’s largest problem to date: rampant fraud.

She and other prosecutors said prison and jail inmates incarcerated for rape, murder and other crimes requested and received hundreds of millions of dollars in unemployment funds, in what could be the biggest taxpayer fraud scheme in state history.

“There was money sent actually to prisons,” Schubert said at the time. “Paid and sent to inmates in prison. There’s evidence that true names of inmates and true social security numbers have been used,” as well as fake names, including John Doe and Poopy Britches, she said.

Schubert has since announced arrests of several people in Sacramento County in connection to the unemployment fraud, including a former EDD worker who allegedly filed 100 fraudulent unemployment claims — one of which was filed under U.S. Sen. Dianne Feinstein’s name.