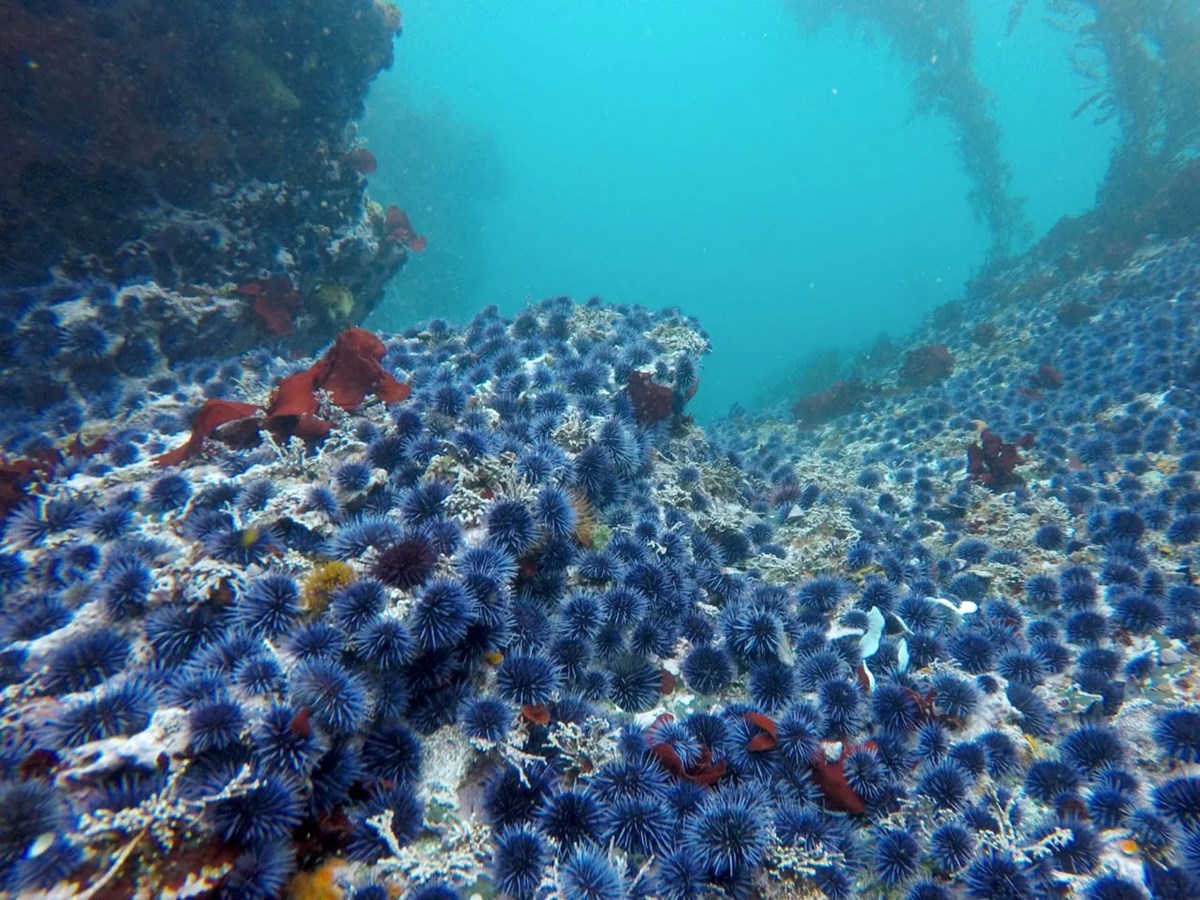 They're purple, spiky and voracious, and just off the West Coast, there are more of them than you can count.

Purple sea urchins have exploded in recent years off California, covering the ocean floor in what divers describe as a "purple carpet." And they devour kelp: the once-lush forests of seaweed that hugged the coastline are disappearing. Since 2014, 95 percent of the kelp have vanished across a large part of Northern California, most of it bull kelp.

Kelp forests provide a crucial ecosystem for a broad range of other marine life and animals, so their demise threatens the ecology across the entire stretch of California coast. The kelp's abrupt decline is being driven by warming waters, and it's a case of how climate change is helping push already-stressed ecosystems over the edge.

Urchins are a normal part of the kelp forest, but a double whammy of ecological change has caused a population boom. Even now, with little food left, the urchins are still able to survive.

"They're kind of like zombies," says Morgan Murphy-Cannella, kelp restoration coordinator with Reef Check California, a group of citizen scientist divers. "They can last for a long time without eating, and they can just live. They're a very bizarre animal."

To give kelp forests a chance against the urchin hoards, scientists and divers are trying out new strategies to carve out refuges. The hope is by removing the urchins, or even catching them for dinner tables, small pockets of kelp might begin to come back. 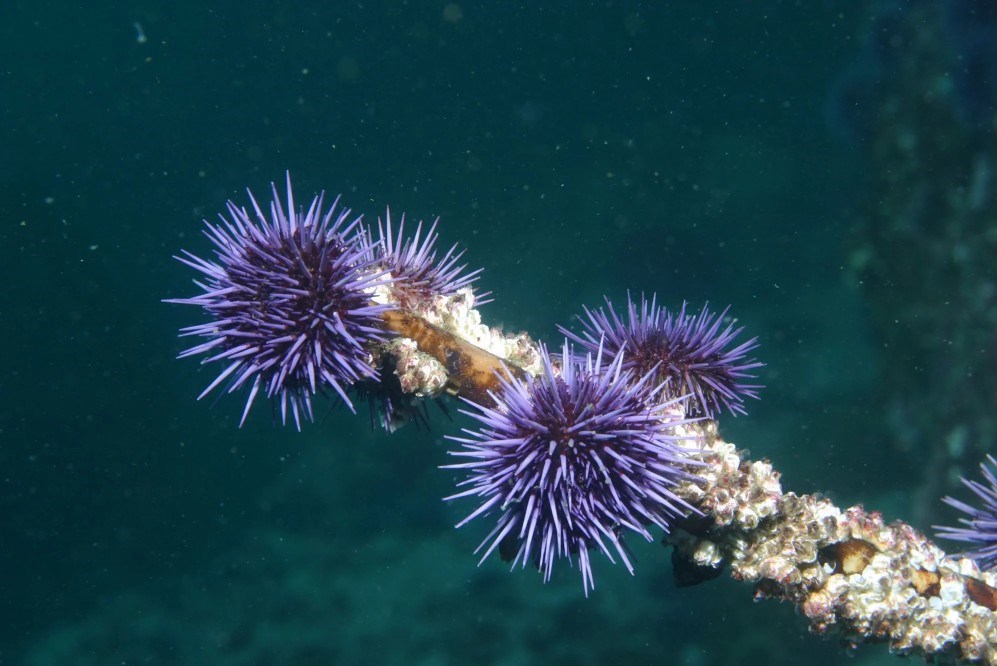 Across much of Northern California, purple urchins have little kelp left to eat, but still can survive.Steve Lonhart / NOAA MBNMS

California's kelp forests are not unlike redwood forests on land. The towering seaweed reaches 30 to 60 feet tall.

At its peak, kelp grows up to two feet per day in the West Coast's cold, rough waters, which are rich in nutrients. But in 2014, the ocean off California began warming.

A mass of warm water in the Pacific Ocean, known as "the Blob," began expanding, raising temperatures high above normal. It was also low in nutrients, stressing the kelp, and it lasted for several years.

At the same time, a widespread disease was shifting the dynamics in the ecosystem. Purple sea urchins are usually kept in check by their main predator on California's North Coast: the sunflower sea star. The large sea star (also known as a starfish) has more than 20 arms and spans several feet across.

With their predator largely gone, purple urchins boomed. While they usually hide in crevices, they became increasingly bold as competition for food increased.

"Sometimes we see dozens of them crawling up the stem of the kelp and taking it down from there," says Meredith McPherson, a graduate student at UC Santa Cruz.

The urchins have been particularly devastating for bull kelp, the main species off Northern California. The plants only last a year, re-growing every spring. But as soon as the adult plants release spores to seed new kelp, urchins stand ready to devour them before they have a chance to grow.

Using a 34-year record of satellite imagery, McPherson and her colleagues measured the loss of kelp forests off California's Sonoma and Mendocino counties, finding that 95 percent are gone.

"We were expecting something like that," she says. "But it doesn't really make it any easier to digest in terms of the actual loss of the coastal ecosystem."

"The combination of all these abrupt changes is what caused the collapse of the kelp forest on the North Coast," McPherson says. "The stressors from climate change, it just really puts these systems, not just marine systems, into precarious positions."

So, now West Coast divers are searching for ways to a small dent in the onslaught.

As the purple urchin numbers grew, divers in Fort Bragg, California watched their livelihood begin to slip away. The decline in kelp also meant the disappearance of red urchins, the larger and more commercially valuable species. Catches began declining, as well as for abalone, another valuable species.

So, commercial divers teamed up on a pilot project with Reef Check California, a group of citizen-scientist divers. They identified a small patch of kelp forest near Fort Bragg that had become an "urchin barren" in the hope of bringing it back. 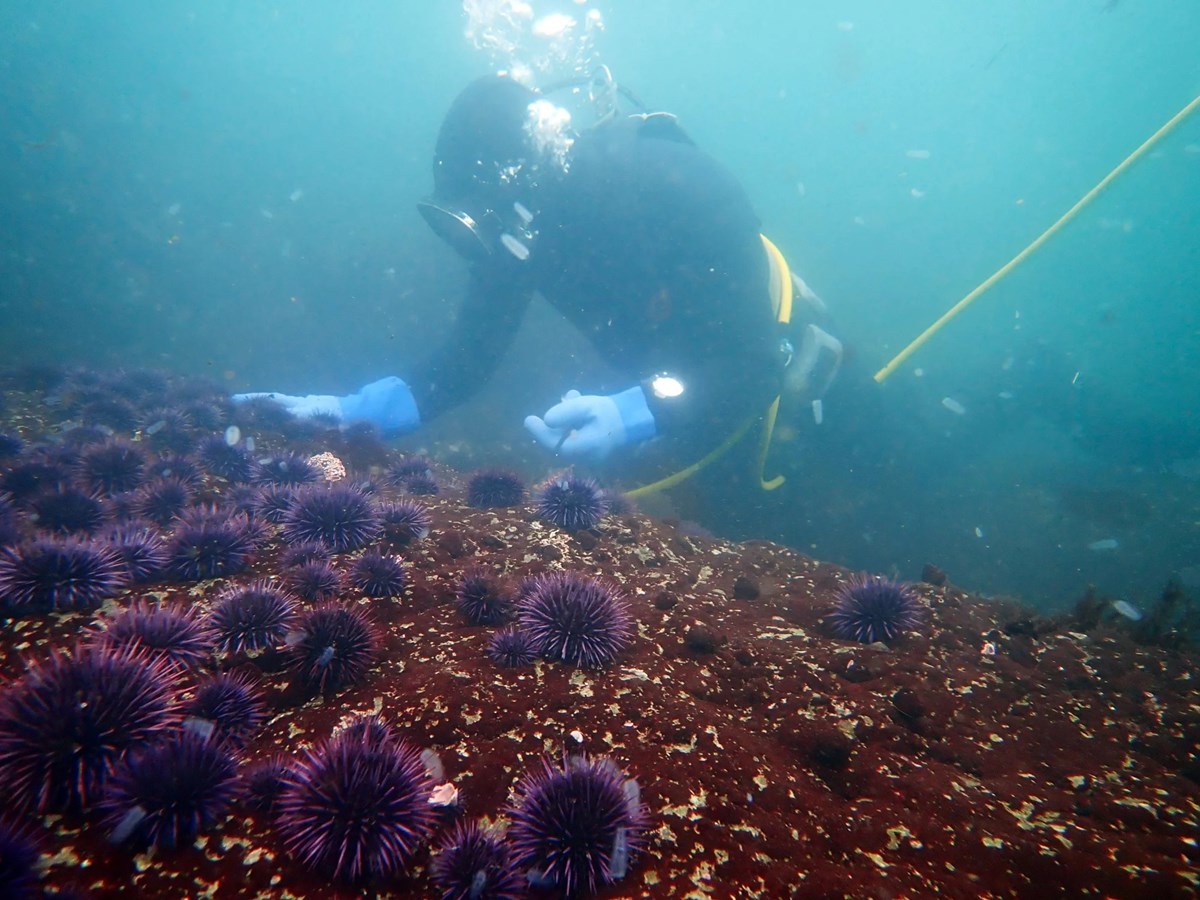 Beginning last summer, divers began collecting as many urchins as they could over an area the size of three football fields, filling their nets until they were brimming with purple spikes.

"It's pretty amazing to see them work," Murphy-Cannella says, who coordinates the project. "Some guys have rakes attached to their hand kind of like Wolverine from X-Men."

The divers removed more than 20,000 pounds of urchins, which were then taken to a composting facility. To keep the urchin numbers low, they plan to return to the site this year. Divers from Reef Check California are also doing scientific monitoring to measure how well it's working. The hope is that spores floating in from nearby healthy kelp forests will seed new growth.

"I think that we can do this," Murphy-Cannella says. "It's going to have to be a long term project, but I think we can create these oasis zones where we can see kelp grow back."

The urchin's main predator off Northern California, the sunflower sea star, still shows few signs of coming back. Researchers at the University of Washington have begun a breeding program to learn more about raising them in captivity, in the hope of reintroducing them someday.

Still, sunflower sea stars aren't the only predator out there. Purple urchins were once eaten by another on the North Coast: sea otters. 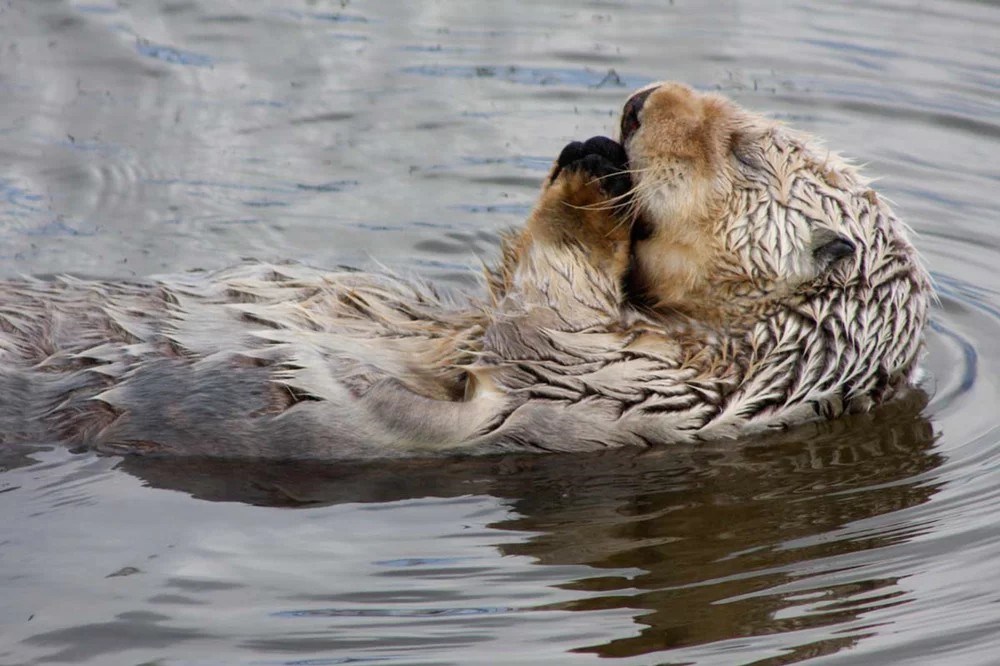 In the 1800s, California's sea otters were hunted almost to extinction for their fur. A small group managed to survive near Big Sur and has expanded, aided by otter rescue and rehabilitation efforts by the Monterey Bay Aquarium and others.

Where otters are found today in Central California, kelp forests are doing significantly better, in part because of the otters' healthy appetite. Sea otters that feed heavily on urchins even develop purplish teeth.

Though their numbers have grown, sea otters still haven't expanded into Northern California where they once lived. Migrating north would take them through waters heavily used by great white sharks. While the sharks don't generally eat otters, they do take exploratory bites which can lead to the otter's death. Establishing otter populations in San Francisco Bay and elsewhere would require deliberate reintroduction.

Even then, while otters play a crucial role in maintaining healthy kelp forests, they may not do much for kelp that's already disappeared. In urchin barrens, there's little food to eat, so the urchins there are emaciated, offering little nutritional value to otters. New research shows otters focus on hunting urchins in healthy kelp forests instead, leaving the areas outside alone.

Strategy #3: humans are predators too

Stephanie Mutz has created a small role for herself, too, in the effort to reduce urchins off California. On a street corner in San Francisco, Mutz unloads bins of purple urchins from her van for some waiting customers.

Mutz is carving out a seafood market for purple urchins. She's a diver who runs Sea Stephanie Fish, based in Santa Barbara, California. On the West Coast, most diners eat uni from red urchins. (Uni is the urchin's rich, yellow reproductive organ found on the menus of many sushi restaurants.) But diving over the years, Mutz has watched purple urchins as they've encroached.

While they're easy to catch, purple urchins often don't have much uni inside since they're competing with each other for food.

"A lot of times, they're super skinny or empty inside," she says. "They're not marketable at all."

So, with her partners, Mutz began urchin ranching. She catches purple urchins in the wild and brings them to the Cultured Abalone Farm just north of Santa Barbara. The urchins spend several weeks eating, fattening up until they reach market weight.

Mutz first started offering them to restaurants, but with the pandemic, shifted to selling directly to customers. When she recently opened orders for a delivery day in the Bay Area, she sold 300 urchins online in six minutes.

"The word has gotten out about the nuisance of the purple urchins," she says. "So it's like 'Oh, I'm doing really great for the environment. I'm going to eat these guys.'"

Other urchin ranching projects are getting underway in California as well. The seafood company Urchinomics is developing a site in Bodega Bay with the goal of eventually selling many tons of purple urchins every year.

Still, given the scale of the problem, eating purple urchins is only likely to make a small dent, at best. Knocking the urchins back would take either a widespread shift in ocean conditions or an urchin disease. But the hope is that all of these strategies could buy California kelp forests a little more time. 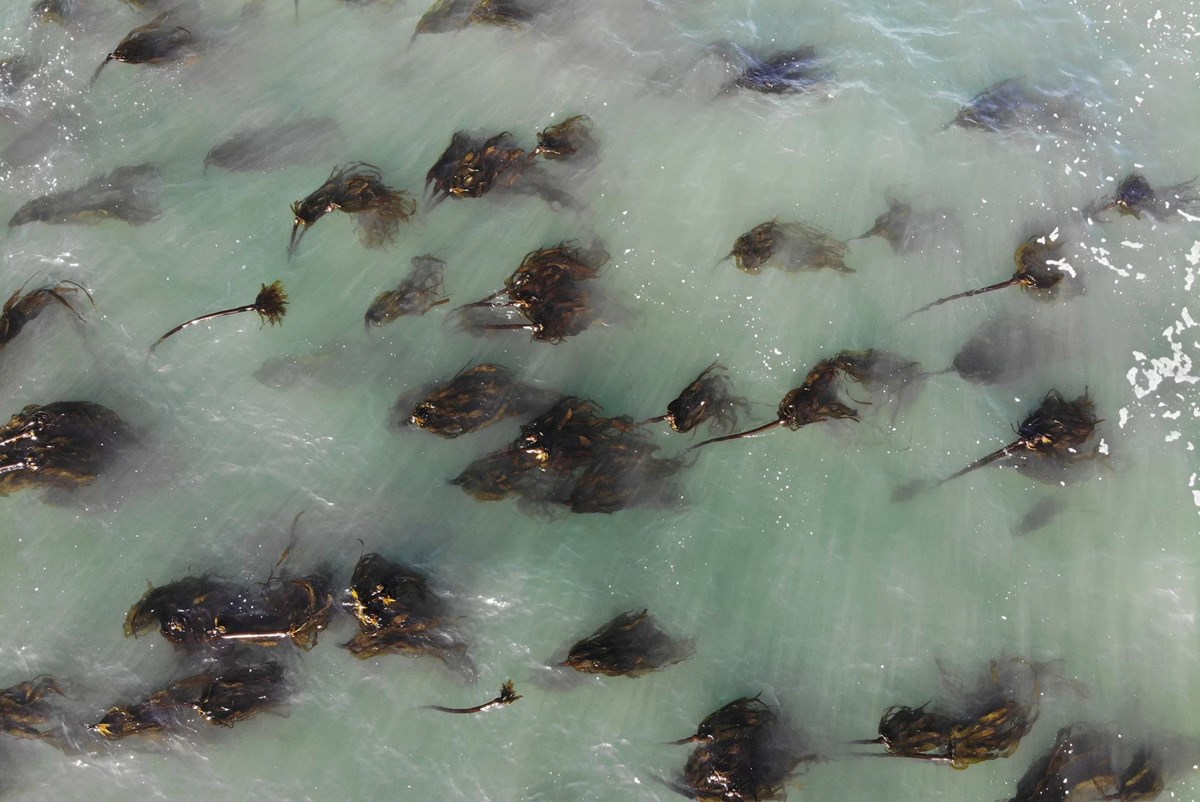 One of the last remaining kelp forests near Elk, Calif., on the Northern California coast.Terry Chea / AP
Follow us for more stories like this