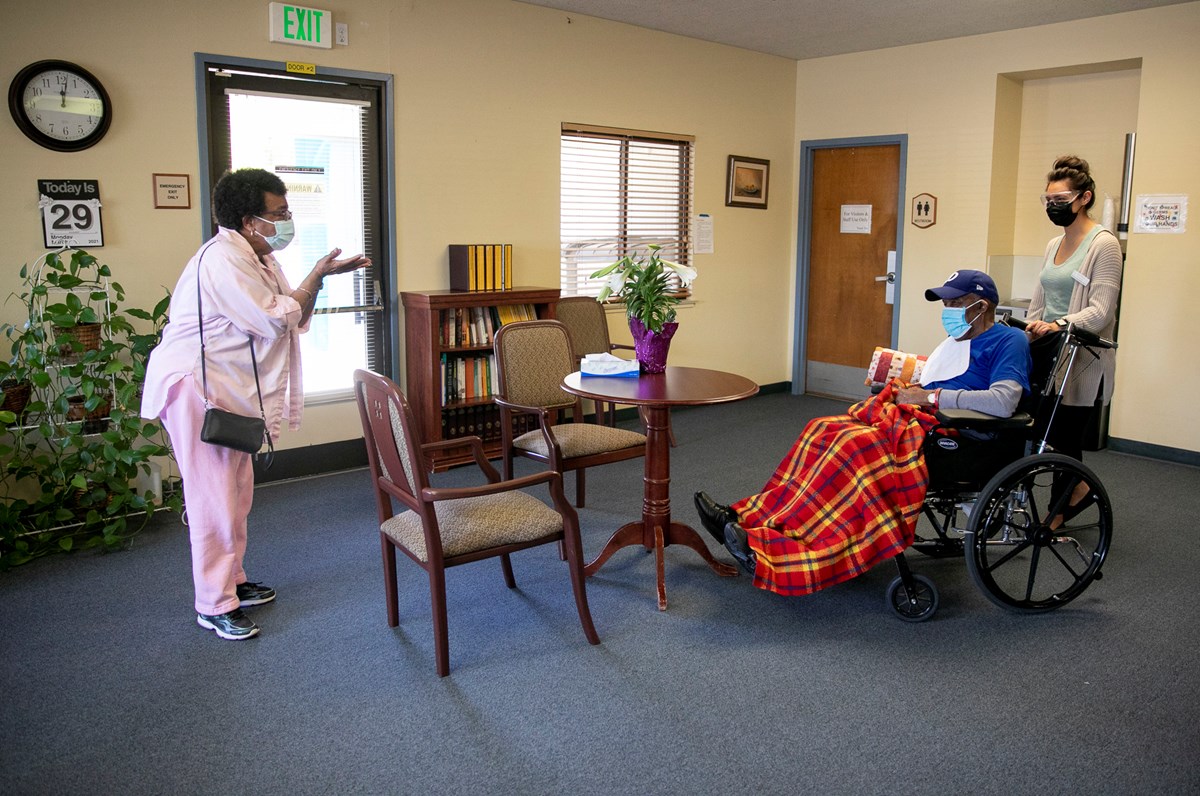 Ouida Dill, left, blows a kiss to her husband, David, at the end of their visit at Lincoln Glen Skilled Nursing Facility in San Jose. David has been a resident at Lincoln Glen for more than four years.

At the height of the winter surge, more than 80 residents of nursing facilities died every day from COVID-19. In March, however, fewer than 15 new cases were reported each day, and deaths dropped to between one and six people daily, according to the California Department of Public Health.

Health experts credit a massive nationwide campaign to vaccinate elderly and frail residents and their caregivers. About 87% of the 85,000 people who live in California’s skilled nursing facilities have been fully vaccinated, according to the state health agency.

“There is no question whatsoever that the vaccine has made a huge difference,” said Dr. Mike Wasserman, a geriatrician and past president of the California Association of Long Term Care Medicine. “When you have a nursing home that is fully vaccinated, the residents are protected, and we are seeing a dramatic decrease in cases and deaths.”

Deaths and infections also have declined in California’s more than 7,400 assisted living centers and other long-term care facilities. About 3,700 residents and staff there have died from COVID-19. Over the past week, there’s been 223 active COVID cases.

Nationwide, COVID-19 cases in skilled nursing and assisted living facilities have dropped 96% since December 20, according to a report released Tuesday by two long-term care industry groups.

Long-term care residents were first in line for vaccinations, along with health care workers, for the nation’s first, scarce doses of vaccines. More than 830,000 COVID vaccine doses have been administered to residents and workers at nursing homes, assisted living facilities and group homes, according to the U.S. Centers for Disease Control. That’s more than any other state.

For many long-term care residents, the pandemic’s ultimate toll remains grim, with higher rates of depression, incontinence and weight loss linked to long-term social isolation, according to a new study.

After a year of window visits, Ouida and David Dill reunited indoors on Monday for the first time since the lockdown a year ago at the Lincoln Glen Nursing Facility in San Jose, where David has lived for more than four years.

Ouida Dill was allowed into a community room to see her husband of 60 years, seated in a wheelchair with a bright red and yellow plaid blanket on his lap. 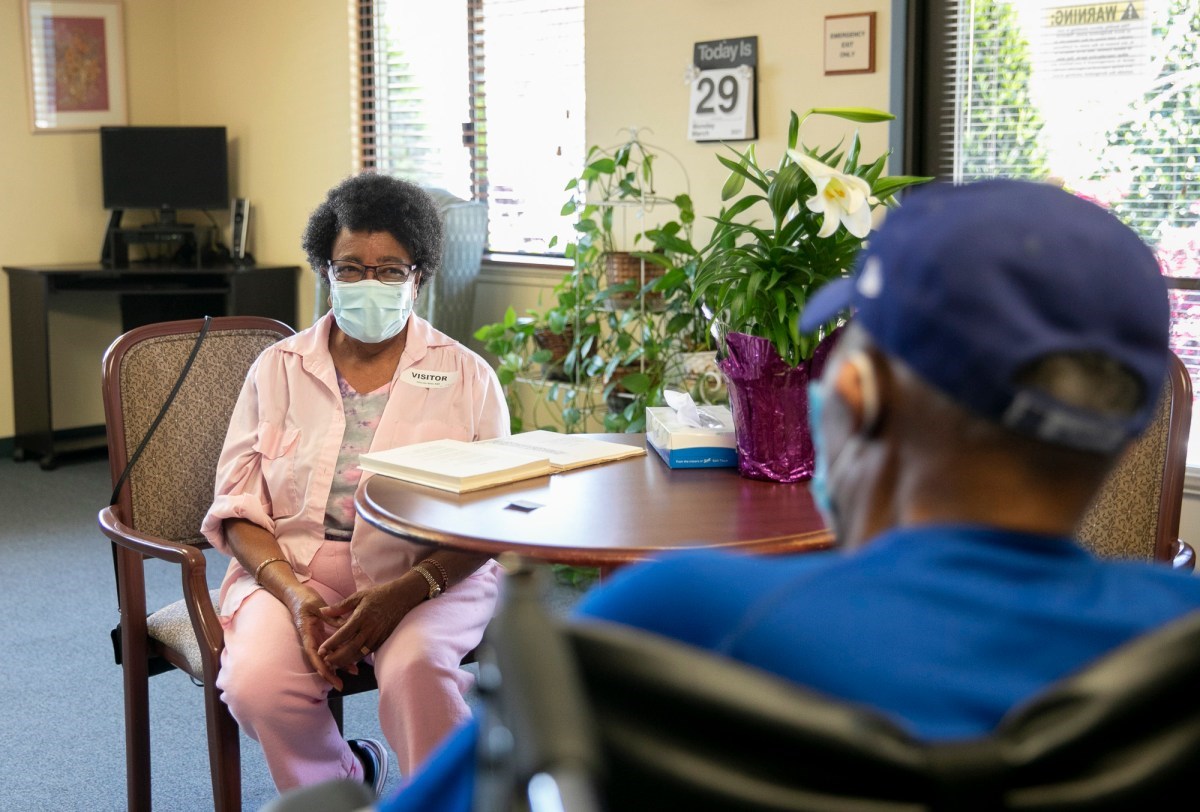 Ouida and David Dill have to stay separated by six feet because he is not yet vaccinated. “I can’t wait to just be able to touch him,” she said.Anne Wernikoff/CalMatters

“It was exhilarating,” said Ouida, 79. “Even though he was sleepy, I could tell it was a positive thing. It just feels more like normal.”

But as she read Shel Silverstein poems to her husband, they had to remain at least six feet apart. While she is fully vaccinated, her husband is not. The 83-year-old former satellite test engineer contracted COVID-19 during the nursing home’s outbreak, giving him some immunity, but because of the type of treatment he received, he cannot be vaccinated until mid-April, Ouida said.

She said that David, who cannot walk and suffers from dementia, regressed somewhat during his year of isolation. Before the pandemic, she ate at least one meal with him on most days.

The nursing home where David lives managed to avoid COVID-19 through most of the pandemic, according to administrator Rebecca Turner. But it was struck during the winter surge with an outbreak that infected 47 residents and killed 14.

Even as long-term care homes reopen, family members and health experts remain concerned about the number of workers who have been vaccinated, as they have been a primary conduit for infections.

Turner said about 72% of its residents and nearly all caregivers have been vaccinated, although some of her workers were hesitant at first. 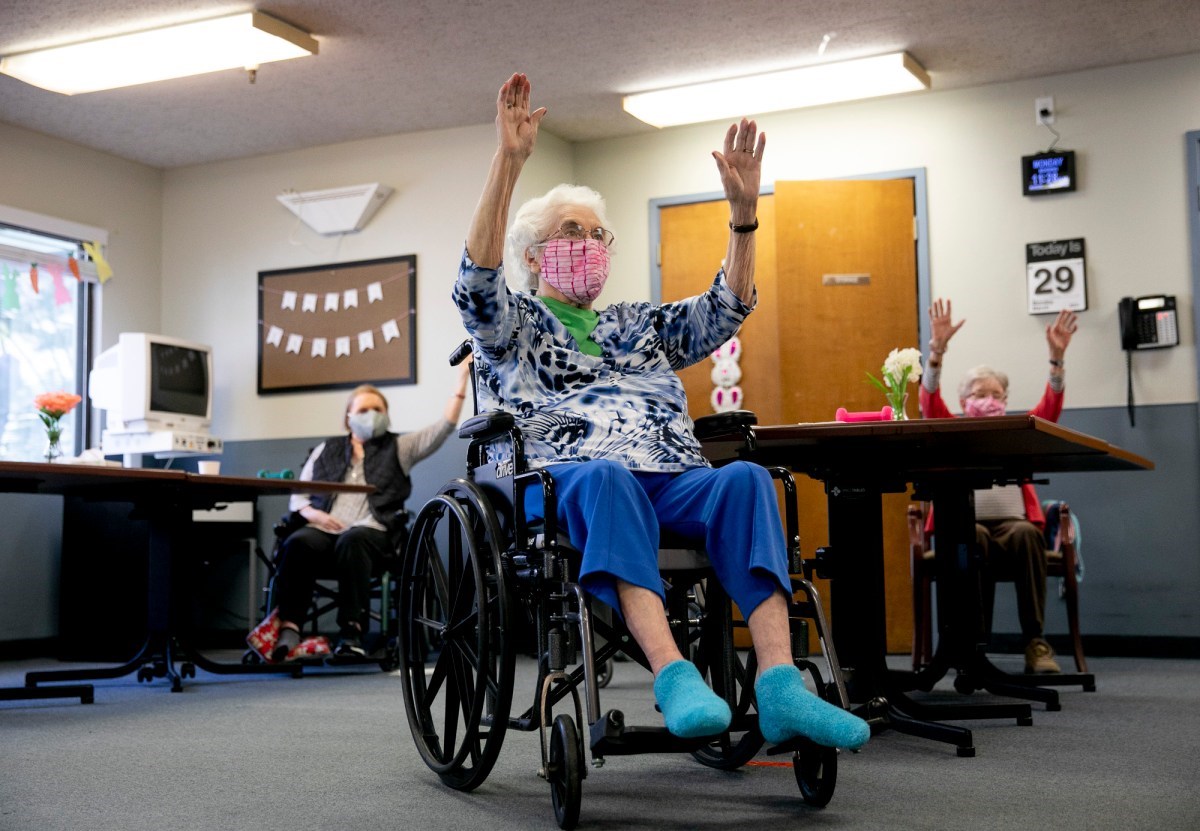 Betty Carter, center, participates in group exercise with others from her cohort at Lincoln Glen Skilled Nursing Facility.Anne Wernikoff/CalMatters

Statewide, about 88% of workers in skilled nursing facilities have been fully vaccinated, according to state data. But that drops to only 65% of workers when other long-term care centers, such as assisted living homes, are included, according to federal data.

Wasserman, the geriatrician, said state officials need to ensure that new patients and staff have access to vaccines and any boosters after the end of the federal long-term care vaccination campaign this winter. Fortunately, pharmacies that serve long-term care facilities now can get vaccinations directly through the federal government, he said.

“I think we are taking a short moment to feel relieved. And then we’re starting to worry again,” Wasserman said. “We’re not worried about the next three months. We’re worried about what comes after. If we are not prepared, we could go through this again.”