Gov. Gavin Newsom and legislative leaders had a lot of people to thank when they gathered earlier this week to announce the state’s plan to reopen public schools. They expressed gratitude for each other, name-dropped several Democratic lawmakers and even acknowledged teachers, parents and students who have struggled to learn at home amid the COVID-19 pandemic.

Thurmond did not attend Monday’s event at a school in Elk Grove where Newsom announced the $6.6 billion deal. Nor did he accompany the governor the next day when he visited an elementary school in Palo Alto. And though Thurmond shared the spotlight with Newsom when the governor unveiled his original school reopening plan late last year, he had a lesser role in negotiating the final details of the revised plan that lawmakers approved on Thursday. When Newsom signed the bill on Friday, however, Thurmond joined him for the virtual ceremony.

The plan reflects a deal between Newsom and the Legislature, and there is no requirement that the schools chief be involved. But Californians elected Thurmond to lead a school system serving 6 million students — most of whom have not been inside a classroom for nearly a year. His low profile as California struggles to resolve this massive educational disruption raises questions about how effectively he’s using the power of the office.

“The nature of my work is that a lot of times I don’t show up in the front,” Thurmond said. “The way that I get things done has to be through relationships, bully pulpit, facilitative work.”

In some other states, education leaders have more visibly guided schools through the pandemic. In Connecticut, education commissioner Miguel Cardona played a hands-on role negotiating with unions to reopen schools before President Joe Biden tapped him as the new U.S. education secretary. In Arizona, state Supt. Kathy Hoffman openly clashed with the governor as she pushed for stronger safety precautions in the schools.

Thurmond, a Democrat from the East Bay who was a local school board member and legislator, was elected as the state’s top education official in 2018. The California Teachers Association spent $8.5 million supporting him. The powerful union also spent $1.1 million backing Newsom for governor that year.

But as Newsom began pushing, in recent weeks, for schools to reopen, his relationship with the union grew strained. Teachers’ unions have had a mixed response to the reopening plan, which Newsom has touted at appearances around the state as he works to fend off a potential recall.

“The governor is announcing it because ultimately voters are going to hold him most responsible for all things related to the pandemic and government institutions,” said Rob Stutzman, a GOP strategist who worked for former Gov. Arnold Schwarzenegger. “He’s the one that is primarily on the hot seat.”

Thurmond acknowledged that he “wasn’t in the room” when the final details of the school reopening plan were negotiated, but said he was in frequent communication with Newsom and lawmakers in earlier phases of its development. He said that aspects of the plan reflect his input and he supports it.

Thurmond also said he’s been working doggedly behind the scenes to raise corporate and foundation money to buy computers and tablets for students, produce web-based training for educators, develop new initiatives to combat racism and implicit bias, and sponsor bills to expand mental health programs and boost the number of teachers of color. He said he convened statewide labor unions and district management groups over the summer in an attempt to negotiate a statewide reopening agreement, but that talks fell apart when management groups walked away after just a couple of meetings. 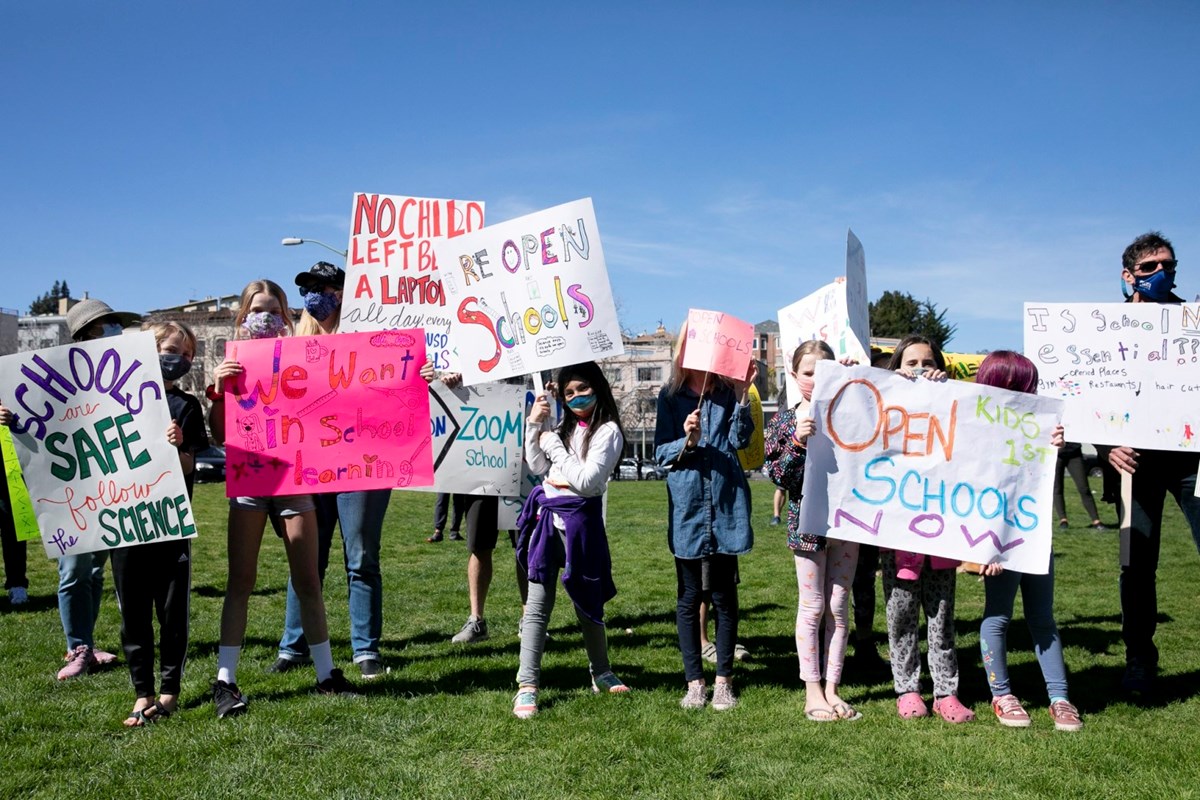 Children and their parents participate in a rally to reopen Oakland public schools at Astro Park on Feb. 28, 2021.Anne Wernikoff / CalMatters

Publicly, Thurmond has advanced teacher concerns that educators should get vaccine priority and that schools need more money for COVID-19 testing.

Assemblymember Kevin McCarty said Thurmond has been very involved in working with lawmakers on efforts to expand transitional kindergarten and discuss a possible school bond.

“I see typical engagement from our superintendent,” the Sacramento Democrat said.

In the meantime, California lags the rest of the nation in getting students back into the classroom and tens of thousands of families have fled the public school system, opting for private schools where classrooms are open. Some parents have delayed their young children’s education altogether, while some teens have dropped out to work instead. And many public school parents have grown increasingly fed up that their children remain home trying to learn on Zoom while malls, nail salons and tattoo parlors are open for business.

Some parents have become disillusioned about whether participating in local school board meetings will make a difference — and they expect the state to help.

“I’m a busy working mom under extreme stress. I had to take three hours at a time to attend school board meetings to get a 90-second slot to speak. It’s just inhumane and bizarre,” said Julia Schaletzky of El Cerrito, a scientist researching COVID-19 therapies who has two children in an elementary school that has been shuttered for a year.

“Isn’t (Thurmond) supposed to be the one who keeps this in check?”

The answer, technically, is no. The state superintendent does not have legal authority to control local school districts. But informally, he can use his position to mediate local conflicts. And Thurmond says he’s spent a lot of time in the last year trying to help district leaders navigate the challenges of the pandemic.

“I recognize the limitations of my office, but I pretend like there aren’t any and I just put myself in the conversation,” Thurmond said. “I feel like I’ve done everything that I could, and more. I feel like I’ve exceeded what my position allows me to do.”

In September, a local school superintendent in Sacramento asked Thurmond to step in when some schools decided that teachers would teach only four days a week, including at an elementary school that serves 98% students of color. Those schedules don’t meet minimum requirements under state law, Jorge Aguilar wrote in a letter to Thurmond.

“We want to bring these civil rights concerns to your attention because we know as the State Superintendent of Public Instruction you share our goal of ensuring that all of the students of Sac City Unified receive equitable access to high quality instruction and social and emotional supports while our schools are in a distance learning model,” he wrote.

Thurmond said he called Aguilar after receiving the letter, but said he couldn’t do much to help because the issue was playing out through the formal process for resolving labor union disputes. Six months later, district spokeswoman Tara Gallegos said this week, the issue has not been resolved. And students at a handful of Sacramento schools still only see their teachers on Zoom four days a week.