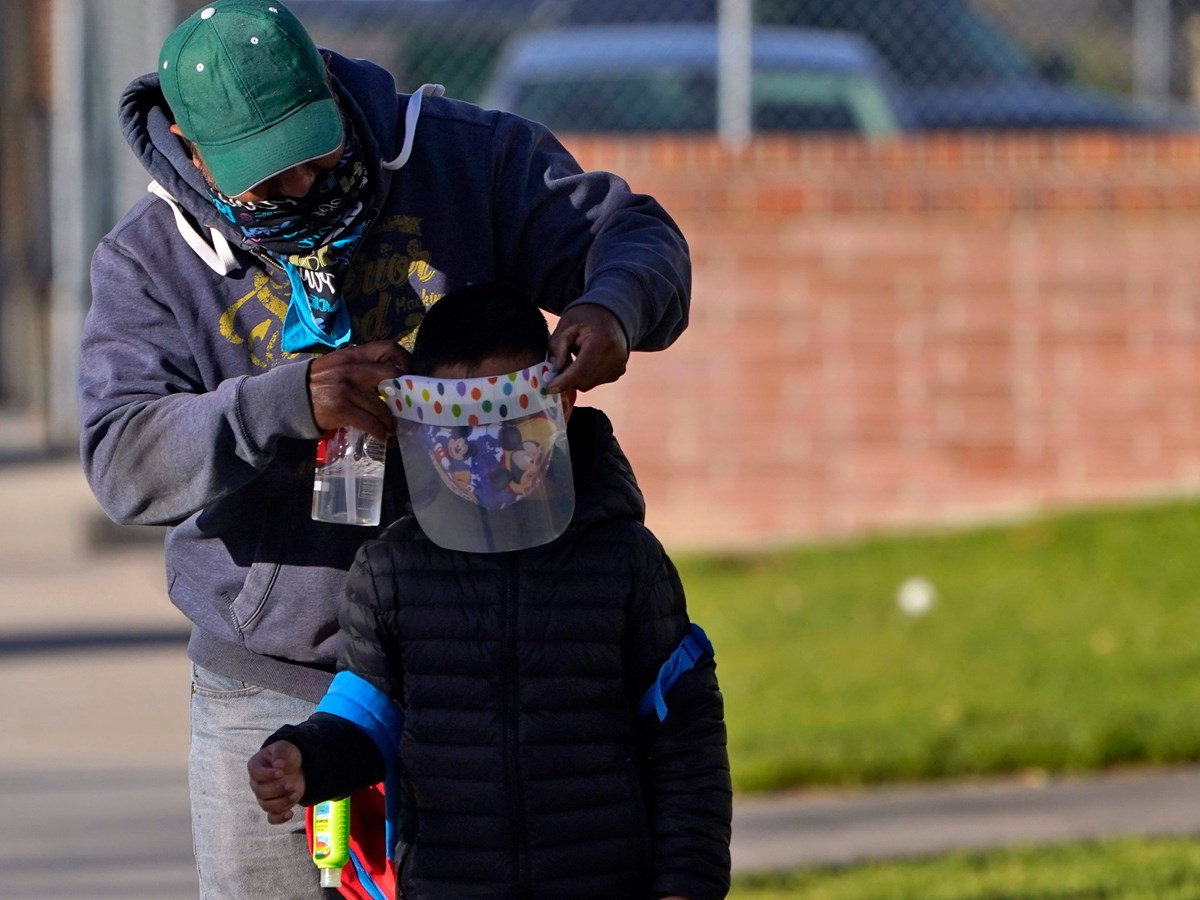 A parent places a face shied on a student outside of Newhall Elementary School Thursday, Feb. 25, 2021, in Santa Clarita, Calif. Elementary school students returned to school this week in the Newhall School District.

After months of negotiating, Gov. Gavin Newsom and legislative leaders struck a deal Monday to encourage schools to bring California’s youngest students back to classrooms by April.

The plan offers $2 billion in incentives to districts that reopen classrooms for students in transitional kindergarten through second grade by March 31. Vulnerable students in all grades — including homeless, disabled and foster youth, English language learners, those without internet access, and disengaged students — must also return for schools to receive the funding.

Once in the red tier of the state's COVID-19 reopening system, counties must bring students through sixth grade back to classes to receive money. Districts that have already reopened can access the $2 billion to continue operating safely.

Schools in counties that are in the most-restrictive purple tier can open their doors to the youngest students as long as the county’s average new coronavirus case count is lower than 25 per 100,000 residents.

The deal also codifies Newsom’s pledge to prioritize educators in the line for the COVID-19 vaccine and sets aside 10% of the state’s vaccine supply for teachers.

“Today marks more broadly a commitment from the state of California ... to provide at least 10% — a minimum of 75,000 doses — we’re setting aside for our educators,” the governor said.

Districts that do not reopen under the state’s guidelines by April 1 will lose 1% of their share for each day students are not on campus. School districts that aren’t teaching in-person by May 15 will forfeit their cut of the $2 billion. The plan also includes $4.6 billion to help address student learning loss. All districts can use that money to extend the school year or fund tutoring and summer programs.

The Legislature approved the measure Thursday, and Newsom signed it Friday.

“I look forward after the vote on Thursday to quickly signing this and moving forward to celebrating the reopening for in-person instruction of schools all up and down the state of California,” Newsom said on Monday.

The plan does not force school districts to reopen, though, instead relying on the funding to encourage schools to bring students back into classrooms.

“It strikes a balance between providing a statewide framework” to help guide districts on their own reopening plans, said Troy Flint, Chief Information Officer of the California School Boards Association. “But it doesn’t completely override local collecting bargaining and it doesn’t override a district’s ability to make decisions based on their specific conditions, which are going to vary from place to place.”

A group of parents from across the state advocating for a full and immediate return to in-person instruction slammed the deal for only opening classrooms to California’s youngest students.

“This isn’t a breakthrough, it's a failure,” said Pat Reilly with OpenSchoolsCA, who has two students in Berkeley Unified School District. “Make no mistake, there will still be closed schools and kids left behind a month from now and months afterwards until the Governor, legislature or the courts force them open.”

Most of the state’s largest school districts have been in distance learning for nearly a full year. As case rates have dropped following a deadly winter coronavirus surge, several large districts have come up with their own reopening plans in recent weeks, including Los Angeles and Sacramento.

The Sacramento City Unified School District recently announced a plan to get some students back into classrooms April 8. In a statement, district officials said they were encouraged by Monday's announcement and were reviewing their plan.

"While we have announced a reopening date beginning April 8, we will consider the incentives and requirements as laid out in the bill announced today," district officials wrote in a statement. "We know many of our families are ready to return in person, and we look forward to offering them that choice."

Newsom announced the deal at an elementary school in the Elk Grove Unified School District. The largest district in Northern California, Elk Grove Unified plans to bring some students back later this month. The district was the first in California to close last year after a family tested positive for COVID-19 in early March. Newsom ordered the rest of the state’s public schools closed on March 13.

Teachers unions have resisted returning to classrooms while the state saw high rates of virus transmission and have pressed hard to prioritize educators for vaccination.

E. Toby Boyd, president of the California Teachers Association, praised state officials for including money for safety measures and learning loss in the deal, as well as ensuring teachers are put near the front of the vaccine line.

“Today’s proposed agreement includes the multi-tiered safety measures educators have been calling for,” Boyd said. “This pandemic has been difficult and wearing on all of us, and it is going to continue to take all of us to make opening our schools for in-person instruction safe, stable and successful.”

Newsom also announced that later this week, the state’s two mass vaccination sites in Oakland and Los Angeles, which are operated by FEMA, would be used to vaccinate educators exclusively.