As Fires Worsen, A Mental Health Crisis For Those Battling Them 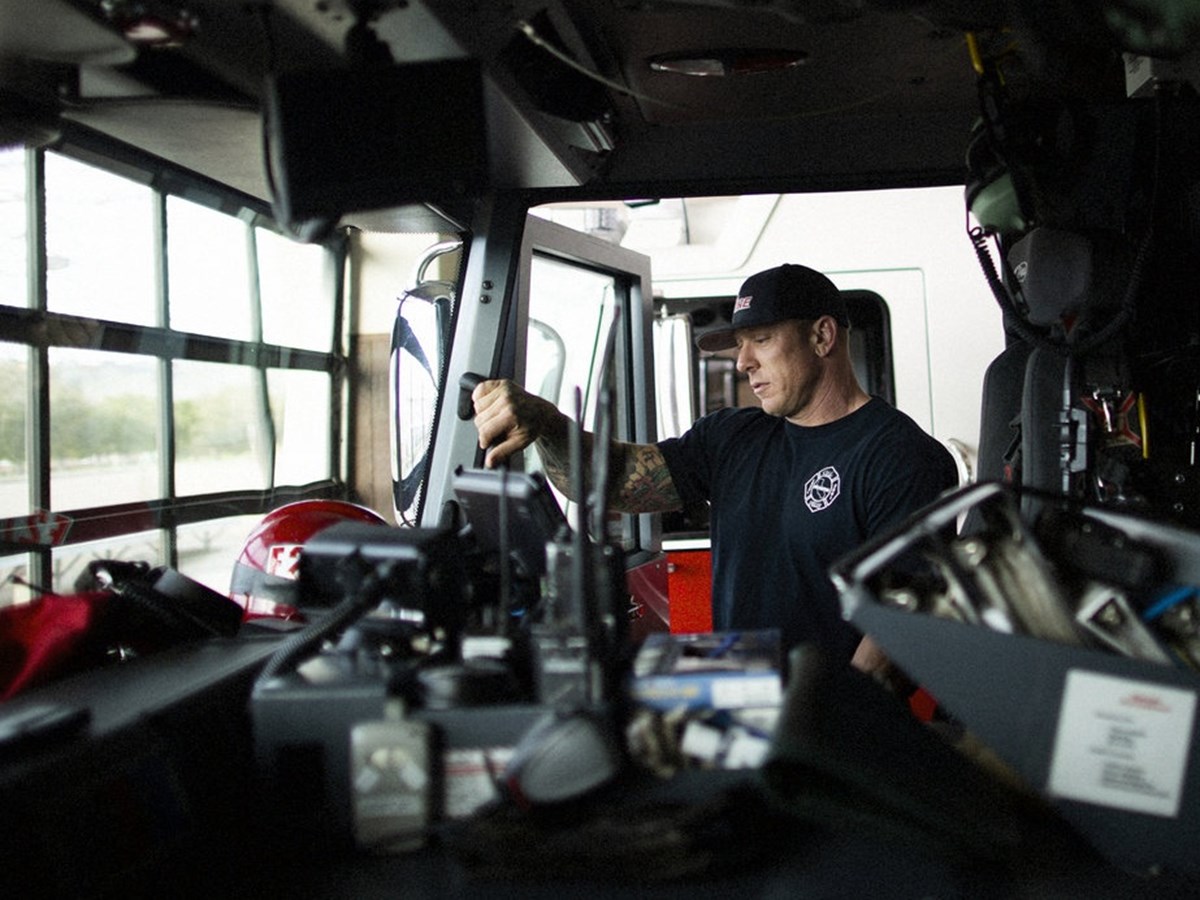 CalFire Captain Matt Newberry has been fighting fire for more than two decades, but he and his crew hit a wall last year.

Somewhere near his fifty-sixth straight hour of chasing flames, CalFire Captain Matt Newberry and his crew were hitting a wall. They'd been dispatched to the wildfire days earlier in the middle of the night. By the next morning, the fire had already ripped across 11,000 acres of Napa County, tearing even through the night the way fires do now.

Despite everything they'd done, hundreds of homes were in smolders.

A good friend and fellow firefighter, "one of the toughest dudes in our unit," Newberry said, broke down. "Just fall to his knees and cry. He couldn't do it anymore."

Newberry had been there himself: Exhausted. Exasperated. Overwhelmed.

Firefighting has always been hard work. But each year fires just seem to get worse. Four million acres in California. Millions more in Oregon, Washington and Colorado. Flames sweeping across Eastern Australia, the Amazon and the Arctic. Thousands of homes destroyed. Lives lost.

"You just feel defeated," said Newberry, who's been fighting fire for more than 20 years. "The things that we used to do that worked ten years ago are no longer working anymore." 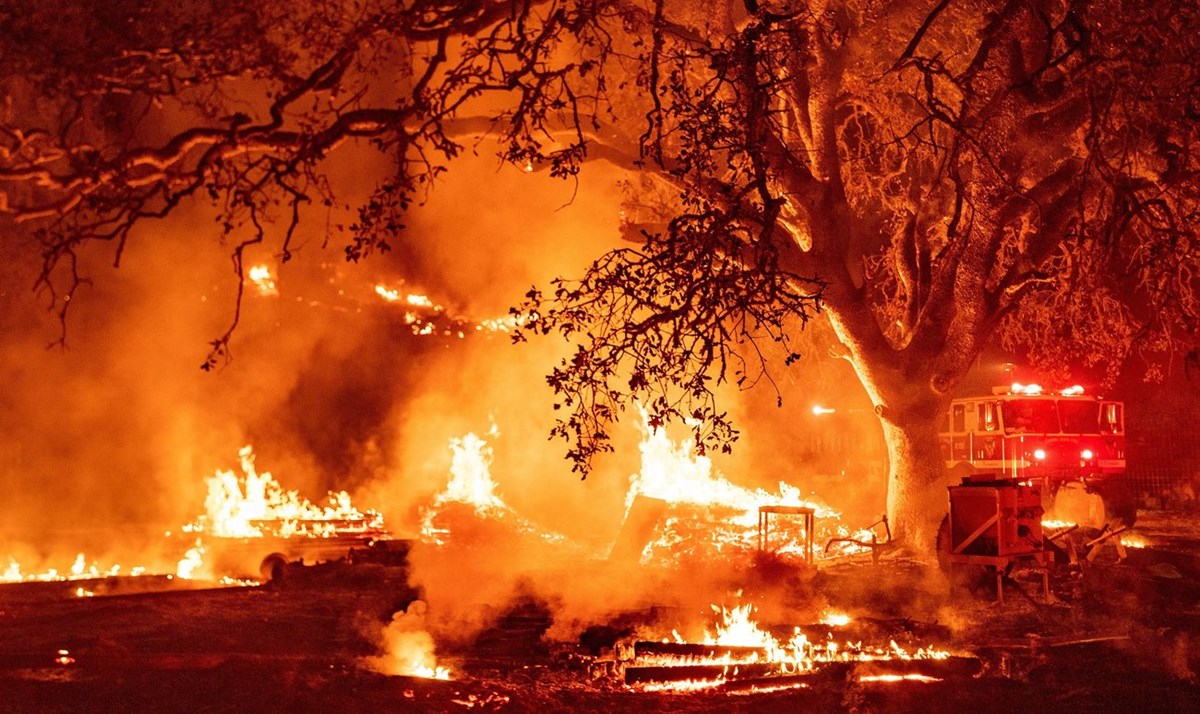 Firefighters work the scene as the Glass fire continues to burn in Calistoga, Calif., on Oct. 1, 2020. The United States's west coast experienced a record-breaking fire season in 2020.Josh Edelson/AFP via Getty Images

The warming climate is making fire seasons longer, and increasing the frequency, intensity and range of wildfires around the world. That's put a growing psychological strain on the people tasked with trying to contain them. Society still expects firefighters to put fires out — a conviction demonstrated every time a new subdivision or home is built in a fire-prone area. Firefighters still expect to corral flames and protect homes.

"That becomes a very difficult tradition to uphold when something like climate change is completely obliterating all of the parameters that they used to live within," said Christine Eriksen, a researcher who focuses on the social impacts of wildfire.

Overnight lows are getting hotter, fueling more active fires at night. Warming temperatures and human development are making more parts of the world susceptible to flame. Big fires, ten-thousand acres and up, used to happen on Newberry's unit a few times a year. "Now we're burning 10,000 acres in a couple hours," he said.

The change is unsettling. 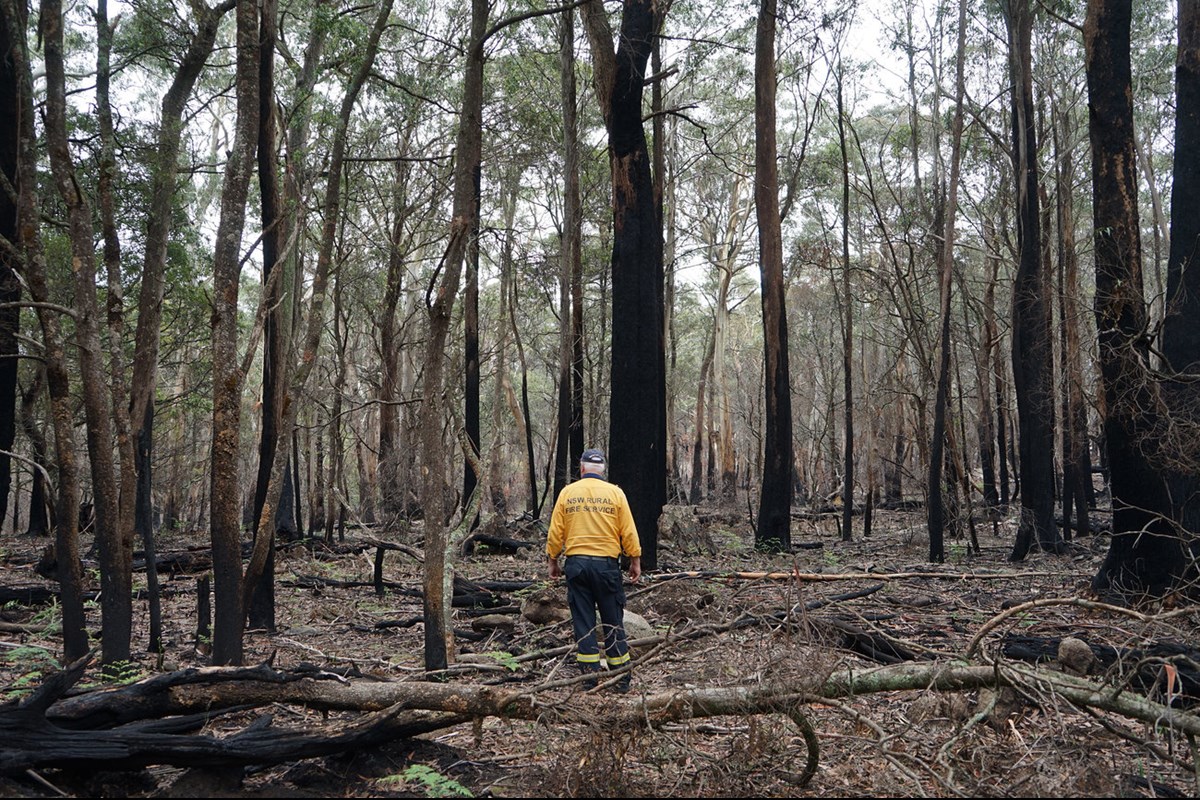 New South Wales rural fire captain Danny King stands at the place he was weeks earlier, when two fires merged. The wind kicked up, King said. "And it was all over. There was nothing we could do."Nathan Rott/NPR

"Many of these firefighters who are often portrayed as heroes in media reportage, they don't feel like heroes. They feel like they failed," Eriksen said. "So there are some real issues going on in terms of their well being."

Firefighters are more likely to die from suicide than in the line of duty, according to the Firefighter Behavioral Health Alliance, a nonprofit that tracks first responder suicides in the U.S. and offers support to their families. Depression, addiction, anxiety, post-traumatic stress disorder aren't uncommon. At times, the symptoms reveal themselves during fire season. More often, it's in the weeks and months after the smoke has cleared.

For Steve Hillyar, a volunteer firefighter in Australia's New South Wales, it was sleepless nights and smoke detectors that got to him. 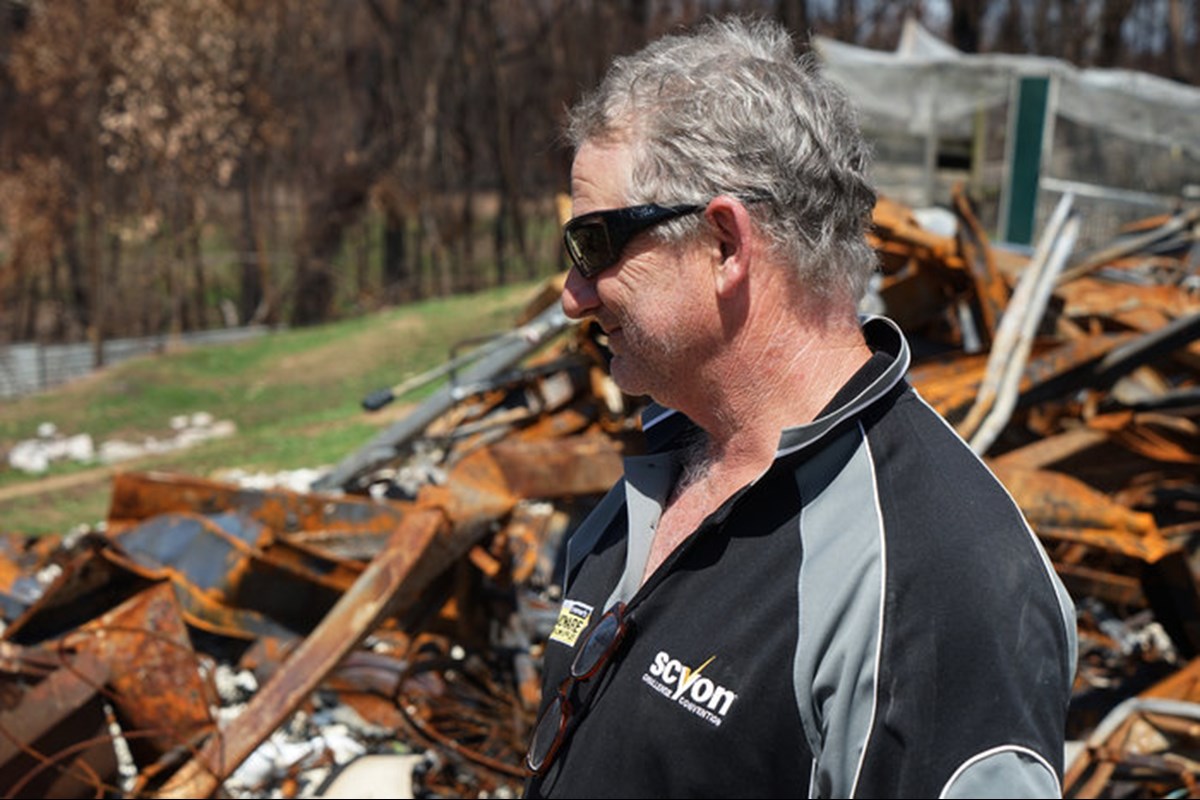 "Most people don't realize that when a house is on fire, or multiple houses, that's all you hear," he said, standing by the charred wreckage of his home. "Smoke detectors."

Sophie Taylor was having trouble sleeping, too. She'd been made a brigade captain on Australia's South Coast just months before the historic wildfires chased people in her area from mountains to beach. Without the adrenaline rush, she said, "You just feel flat all the time."

Ian Spall, a chaplain with New South Wales' Rural Fire Service, was grappling with his faith after spending a summer talking to the families of dead and injured firefighters.

"From a spiritual and psychological perspective, I found this space very confronting, because I have faith that God intervenes and I had faith that God would intervene," Spall said. "And then it didn't happen." 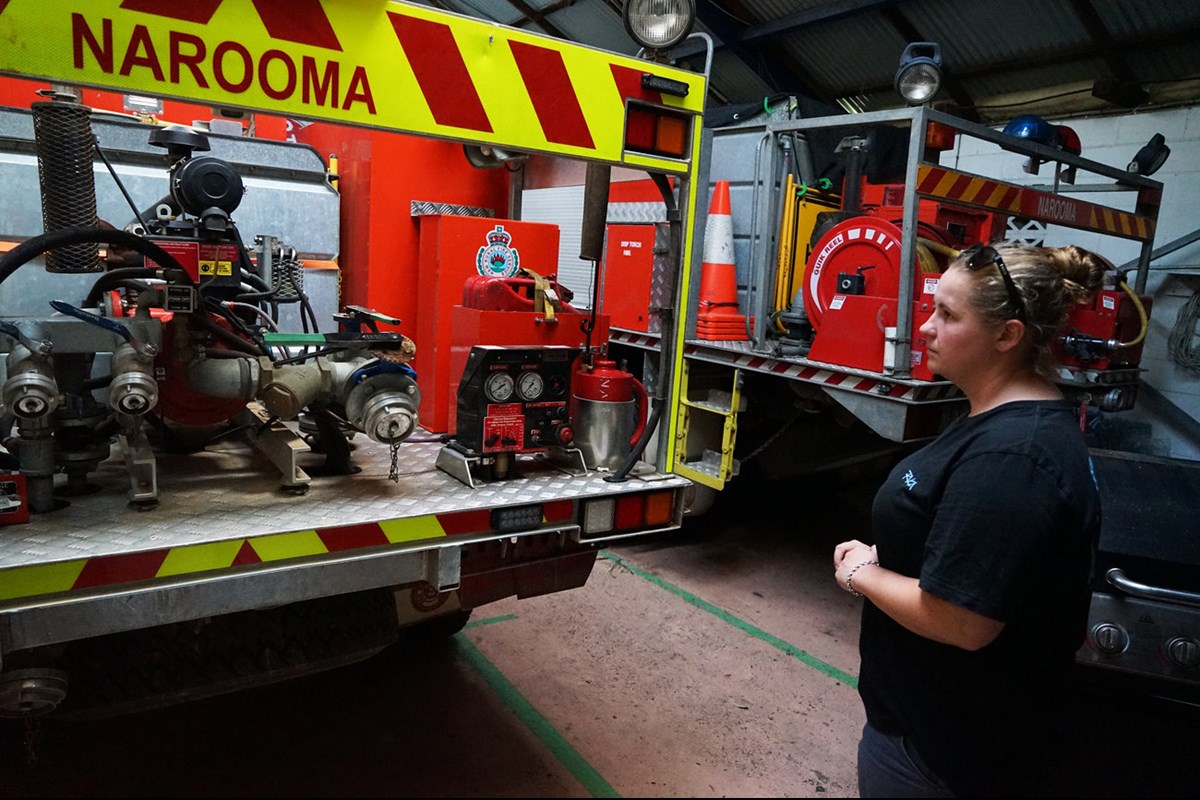 Sophie Taylor was made a brigade captain on Australia's South Coast just months before historic wildfires chased people from mountains to the beach. She says she feels flat without the adrenaline rush of fighting an active fire.Nathan Rott/NPR

For Newberry, it was an accumulation of events. He'd be shook up after a call, but just "sucked it up," he said. "Because that's how it's been for 100 years." Then in 2015, four firefighters, local guys, were badly burnt on the Valley Fire. One was a good friend. The next summer, on the Soberanes Fire, a bulldozer drove off a steep embankment right near Newberry, pinning its driver to the ground and killing him.

"At that point, I just wanted to quit," Newberry said. "I crumbled."

He started drinking and using drugs. His marriage was falling apart, as was his relationship with his four daughters. All of the joy he took from firefighting was gone.

His employer, California's fire agency, helped check him into a post-trauma retreat for first responders, where he underwent a week of intense psychotherapy. "It probably saved my life," Newberry said. "It definitely saved my marriage and my career." 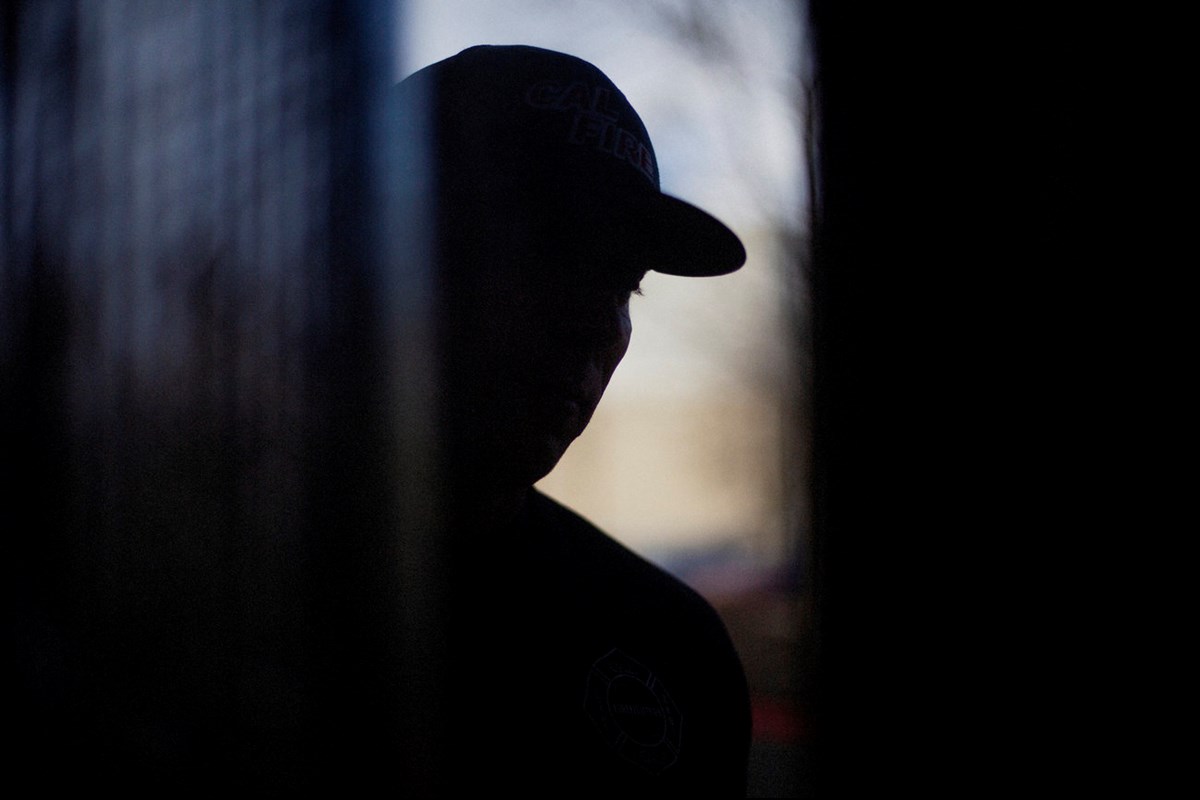 For Newberry, it was an accumulation of events. He'd be shook up after a call, but just "sucked it up," he said. "Because that's how it's been for 100 years."Talia Herman for NPR

Demand is growing for post-traumatic retreats for firefighters and first responders as awareness of mental health issues grows and fires worsen. Newberry guesses at least 40 people from his unit alone have been to a similar program.

During last year's unprecedented fires in California, Newberry, who now doubles as a peer counselor, said he was taking three or four calls a day from colleagues looking for help. The calls continued weeks after fire season officially ended in December.

Men and women were having trouble adjusting to life back home after being away in some cases for more than a month. "You always think, 'Oh yeah, it'll be the same as it was before I left for work,'" Newberry said. "And it's not. S... happened."

For seasonal and volunteer firefighters, the offseason can bring isolation. They're no longer with their crew; no longer around a community of people with shared experiences. Finances can grow tight. No fires, no money. Beneath all of it can be the post-adrenaline feeling of flatness that Taylor experienced.

Good statistics on firefighter mental health are hard to find. But a recent research bulletin posted by the U.S. Department of Health and Human Services says that firefighters are more likely than the public to suffer from depression, stress, substance abuse, post-traumatic stress disorder and suicidal thoughts. 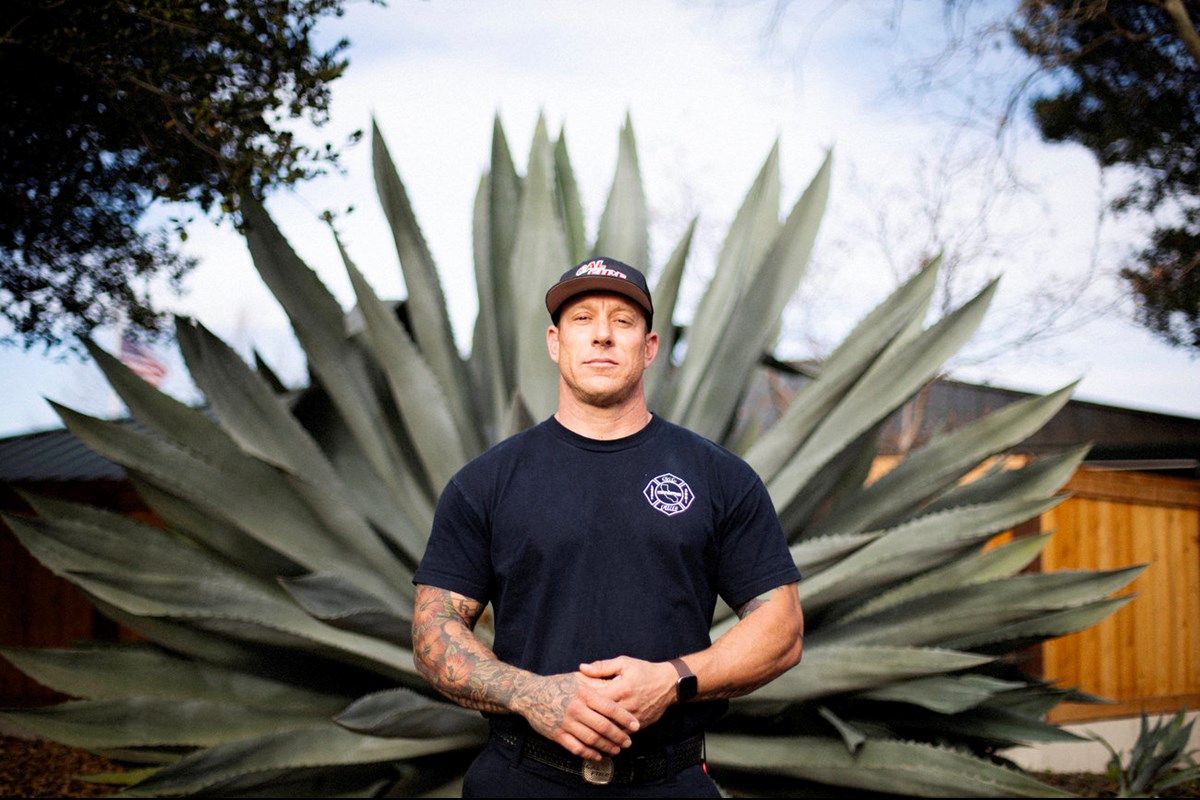 California's fire agency helped check Newberry into a post-trauma retreat for first responders, where he underwent a week of intense psychotherapy. "It probably saved my life," he said.Talia Herman for NPR

A 2018 study out of Florida State University, which surveyed a small number of wildland firefighters, found that they experienced an even higher risk of suicide than their urban counterparts. The concern is that worsening fire seasons will only amplify the problem.

Mike Ming, the head of CalFire's Employee Support Services, which focuses on the mental and physical health of the state's roughly 8,000 firefighters, said the last three to five years — some of the worst fire seasons in state history — have been particularly bad.

They've seen increases in firefighters suffering from burnout, PTSD, depression, anxiety, domestic violence and divorce. The pandemic, he said, is only making all of those things worse.

"Even your 30-year veterans," Ming said. "They're being brought to their knees by the stuff that we're seeing that's atypical in our careers."

A decade ago there were four people in Ming's health and wellness program. Today, they have 26 permanent positions, on top of peer support members and others.

The idea of the program is to not only help California firefighters get the support or counseling they need after an incident, but to give them the tools they need to better process what they're experiencing in the moment. They're taught mindfulness and wellness, breathing techniques that are used by Navy SEALs.

"We tell them Navy SEALs do this and then they're like, 'Ok cool, We can do that. You're cool? I'm cool,'" Ming said. 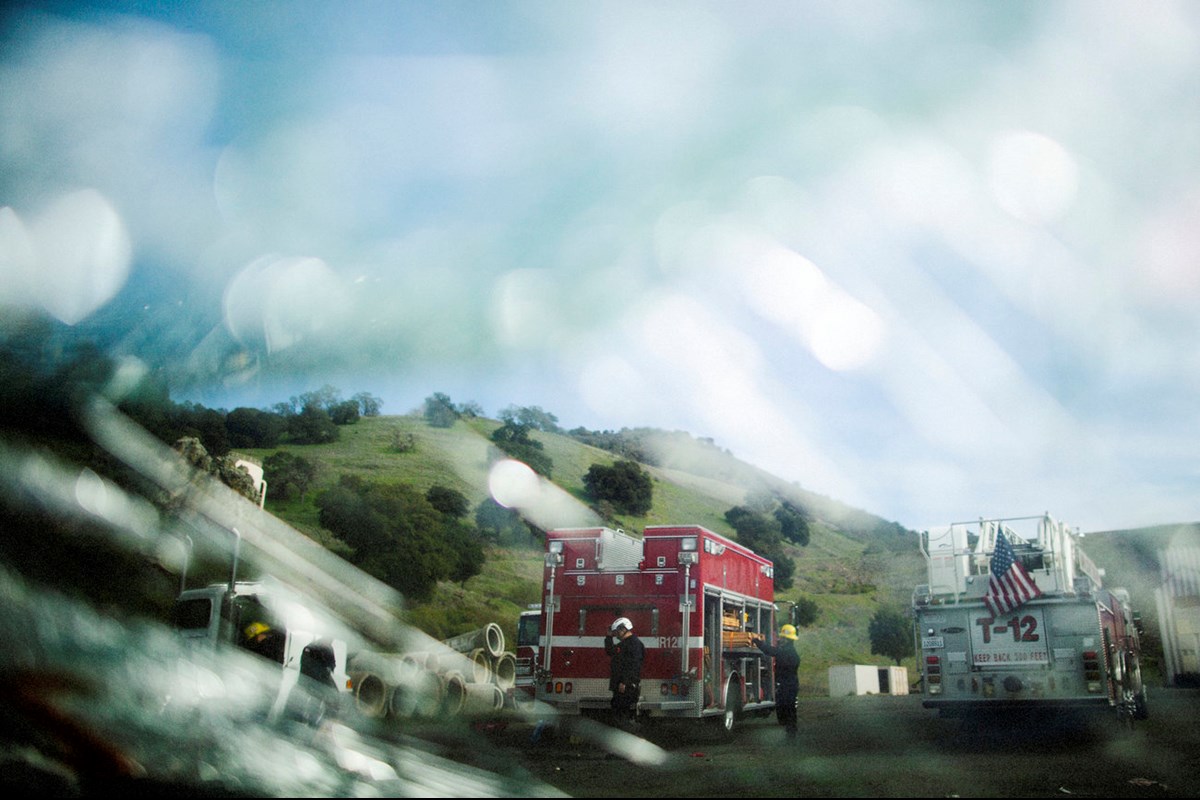 Members of the Napa County Fire Rescue Team participate in training in Yountville. Demand is growing for post-traumatic retreats for firefighters and first responders as awareness of mental health issues grows and fires worsen.Talia Herman for NPR

There can be grumblings from older veterans. In both Australia and California, firefighters talked about an old guard — veteran firefighters who aren't keen to share feelings or put up with people who do.

Ming thinks they've broken through that stigma at CalFire. Older veterans, shaken by recent fires, are more willing to listen. Younger recruits are open to the conversation from the start.

Bodie Ronk, the national system coordinator for fire at the Bureau of Land Management, said the same is true for their firefighters. The BLM and U.S. Forest Service are adding mental fitness to their preseason training regimens. It's now a priority. A push, Ronk said, that was prompted by suicides.

"[We're] really focusing time on having these conversations, and stressing the importance of [firefighters] being able to have those conversations amongst each other," Ronk said.

The National Wildfire Coordinating Group, which coordinates federal, state, tribal and private firefighting groups, selected burnout as the topic of its first newsletter in 2021.

"Burnout might occur if your work seems meaningless or if there is no end in sight under difficult work conditions," it wrote.

A Forest Service employee who identifies as a smokejumper and former Hotshot wrote a petition on the website Change.org, asking Congress to address the issue by — among other things — hiring psychologists for every national forest. 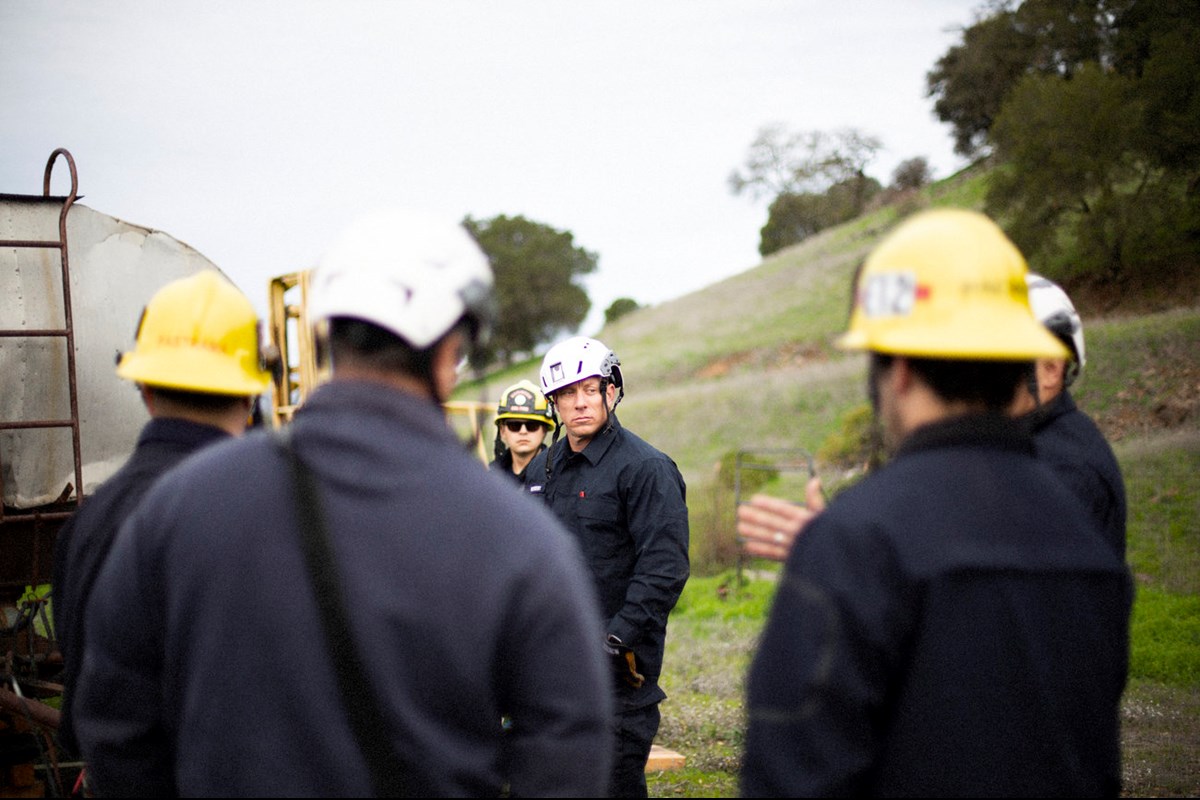 Newberry (center) attends a training with his Napa County Fire Rescue Team. The wellness program aims to not only provide support after an incident, but also help firefighters better process what they experience in the moment.Talia Herman for NPR

"Don't call us 'Heroes' either because when divorces, mental health problems and declining wages are the reality, we don't feel like heroes at all," the smokejumper wrote.

Researcher Eriksen, who's worked with firefighters in the U.S. and Australia, agrees that more resources would help, especially as climate change makes wildfire seasons more difficult to manage. But she said there are also things everyone can do.