Vaccine Clinics For California’s Farmworkers Are Starting, But Advocates Say There Are Hurdles

As California slowly progresses through the COVID-19 vaccination rollout, state health officials are encouraging people over 65 to get in line for the vaccine alongside teachers, first responders and agricultural workers.

But with a limited supply of vaccines and no state guidance on which of those subgroups to prioritize, community groups working with farmworkers say these vulnerable residents are being overlooked.

The state has shipped about 7 million doses to county health departments and hospital systems, and about 4 million of those doses have been administered. The remaining doses and any additional allocations are at the counties’ discretion to divide. Each resident needs two shots to be fully immunized.

At the most recent meeting of the state’s Community Vaccine Advisory Committee, which has been drafting plans for who to prioritize in the vaccine rollout, state epidemiologist Dr. Erica Pan said that between seniors and select front-line workers there are 11.5 million people eligible in the current phase. The state would need 23 million doses to give everyone both shots.

Until then, Pan says counties have difficult decisions to make about frontline workers and seniors.

“We have said that in Tier 1 Phase 1B that those groups are equal,” Pan said. “But the devil’s in the details … really trying to operationalize this is extremely difficult.”

Educators are pushing for priority so that in-person schooling can resume safely, and people with disabilities are lobbying the state to be added into the current priority group.

“And way down at the bottom, on nobody’s radar, are the farmworkers, particularly the Hispanic farmworkers,” said Dr. Walter Newman, a Northern California family physician who’s been giving flu shots to agricultural workers for two decades. “They grow our food.”

Advocates have been working since late last year to keep these residents top of mind for the state. Now, some lawmakers are pushing for a carve-out, and community-based groups are doing what they can to ensure they’re ready to distribute the vaccine whenever doses come their way.

A new study out of the University of California, San Francisco found that Latinx Californians experienced a 36% increase in mortality during the pandemic as compared to historical periods, with a 59% increase among Latinx food/agriculture workers.

Advocates say that’s due to a long list of factors. Latinx Californians, especially those who are undocumented or have undocumented family members, are less likely than white Californians to carry health insurance and to have a regular doctor, largely due to fears of deportation related to using medical services. The 2016 National Agricultural Workers Survey found that only 37% of California’s 800,000 agricultural workers have health insurance. That’s compared to more than 90% of the state’s general population.

Experts raised the alarm about this early in the pandemic, concerned that Latinx residents would lack access to testing and would put off seeking medical help until COVID-19 cases became severe. Both case and death rates have been disproportionately high among this group, according to state data.

Latinx Californians largely comprise the state’s food-growing workforce, and recent studies suggest these workers don’t always have access to protective gear and hand sanitizer while working in the field. 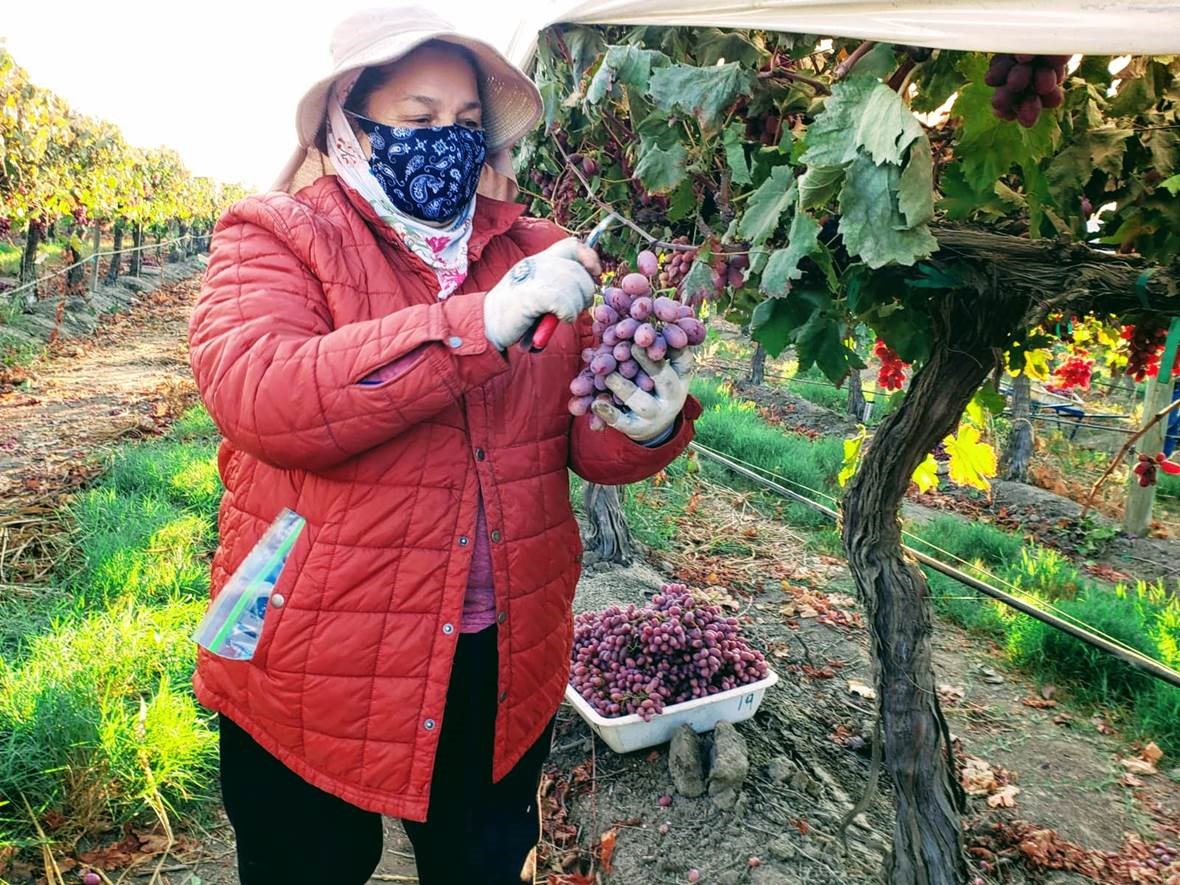 In a survey of 915 farmworkers from the California Institute for Rural Studies, about 56% of participants said they “always” maintained a safe distance at work. Roughly 35% said this happened “sometimes,” and 9.5% said they rarely or never worked at a safe distance.

Bonnie Bade, a professor of medical anthropology at California State University, San Marcos, said at a press conference that it’s difficult for these workers to take time off if they feel sick, because they’re afraid they’ll lose their wages.

“The fear that farmworkers experience is of being exposed at work and infecting the children, of not being able to put enough food on the table,” she said. “Fear of testing positive and being intubated in a hospital and dying alone.”

Workers interviewed also said they frequently commuted in vehicles with people outside their immediate household and lacked access to handwashing stations. Forty-three percent of participants reported that their employers did not provide face coverings.

Community groups that are intent on vaccinating farmworkers are collaborating with local health departments to try to get doses out — with varying success.

Many counties are focused on vaccinating people age 65 and older at pharmacies, medical offices and pop-up clinics. Representatives from Sacramento and Yolo counties said plans are in the works to vaccinate farmworkers.

Rachel Rios, executive director at La Familia Counseling Center in Sacramento, told CapRadio last week that they’ve been urging Sacramento County to give them doses for mobile clinics. But they don’t have doses in hand.

“I believe the county wants to work on this,” she said. “I think that everyone's moving in that direction. I just want it to be done sooner versus later.”

There are steps community groups are taking in advance, such as educating farmworker communities about vaccine safety and figuring out how to transport the vaccine at the required temperature.

Advocates say community groups also need to work with health departments to ensure that scheduling is doable for farmworkers. For example, a system where appointments open up at noon each day might not work for someone who is in the field without reliable internet access at that time.

At a recent meeting of the state’s vaccine advisory committee Dr. Hendry Ton, associate vice chancellor for health, equity, diversity and inclusion at UC Davis, said it’s crucial that vaccination of hard-to-reach groups happen at a convenient location, in the presence of trusted people who can explain the process.

“Promotores and other health navigators, this is really essential,” he said. “It takes such a high level of literacy to try to navigate through the current system to get a vaccine, not to mention the other social determinants such as transportation.” 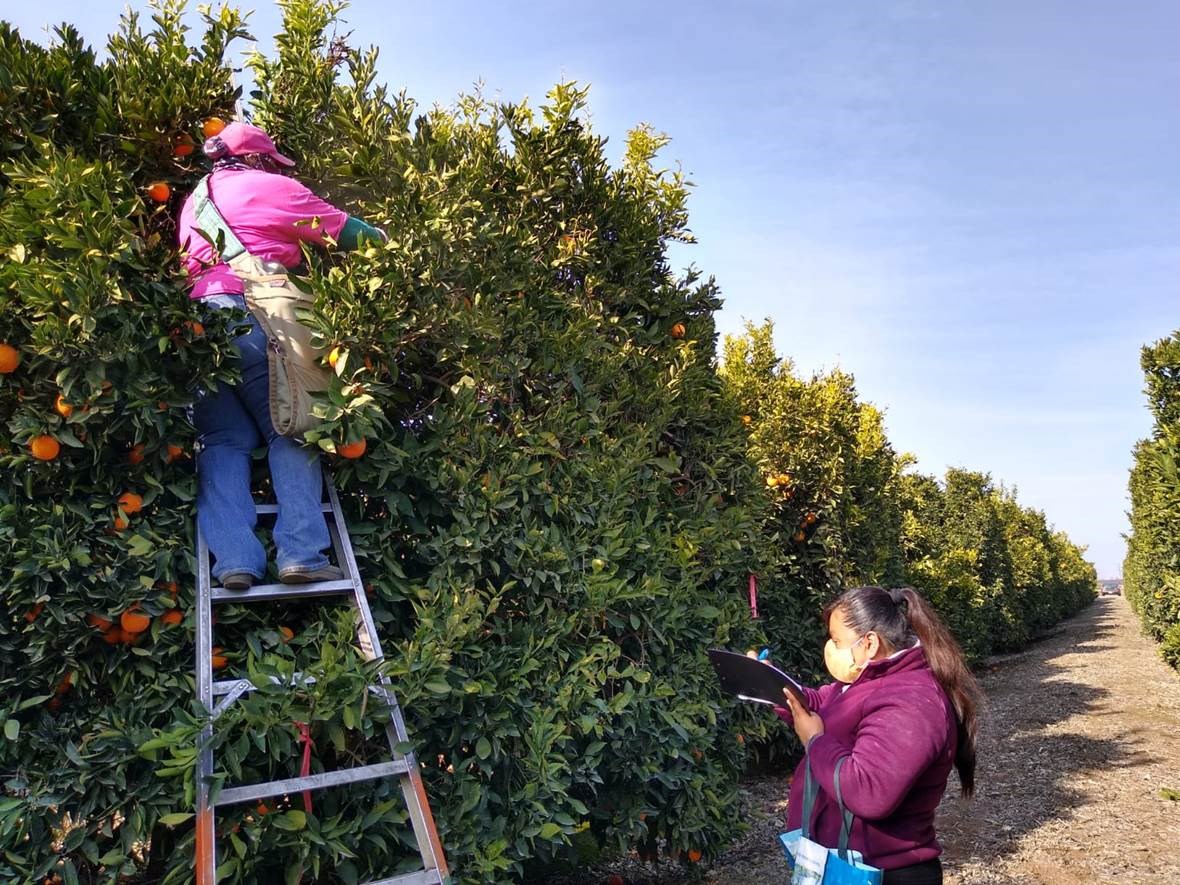 Family physician Dr. Walter Newman says he already has established relationships at farms in eight Northern California counties, and he’s ready to administer COVID-19 vaccine doses as soon as they’re available. He oversees the “Stanford Flu Crew,” a group of medical students that has been bringing influenza vaccines to agricultural workers since 2001.

He says they’re trying to start with vaccinating farm workers over age 65.

“Originally the state indicated that after health care providers, farmworkers in agriculture would be next in line,” he said.

But on Jan. 25, Gov. Gavin Newsom scrapped the original priority plan and introduced the idea of age cohorts. Those cohorts, beyond 65 and older, have not yet been specified.

“They pivoted … they said ‘we’re not going to do it by risk, we’re going to do it based on age.’ So the counties are sticking to the state mandate that people to immunize now are 65 and older.”

Luz Gallegos, director of a Coachella Valley immigrant aid group called TODEC Legal Center, said it took a lot of people speaking up for many months.

“We needed to elevate the voices and continue putting pressure on the government so they could create policies and provide resources for this vulnerable population,” she said. “We have lost a lot of lives,  ag workers and family members … We want to make sure that they’re protected.”

The United Farm Workers Foundation says they’ve organized a handful of successful vaccination events in the Coachella Valley and in Fresno, and are planning to bring doses to a farm in the Monterey area soon.