With intensive care capacity dropping sharply, counties in the San Joaquin Valley and Southern California regions will shut down certain businesses and activities starting Sunday at midnight to curb the spread of COVID-19 under the state's new regional stay-at-home order.

The restrictions will affect more than 27 million Californians, with more possible in the coming days as other regions see ICU capacity drop.

On Saturday, the California Department of Public Health announced that ICU capacity had dropped below 15% in the two regions, triggering the new order that went into effect Saturday at 12:59 p.m. Counties in the two regions have to put the new restrictions in place by 11:59 p.m. on Sunday.

“We know that people are tired of the stringent measures, but they are the only weapons we have to combat the virus," Dr. Maggie Park, San Joaquin County Public Health Officer, wrote in a statement. "Now, more than ever, we need San Joaquin Valley residents to step up and take these actions seriously — wash hands, wear a face covering, limit gatherings, get tested and socially distance.”

According to state health officials, only 8.6% of ICU beds remain open and staffed in the San Joaquin Valley region, with 12.5% remaining in Southern California.

Here are the counties affected:

Under the new restrictions, restaurants will be limited to takeout only and bars, hair salons, barbershops and other businesses will be forced to close for at least three weeks.

Retail stores and shopping centers are permitted to remain open indoors at 20% capacity. Outdoor recreation facilities can also stay open with modifications, and entertainment production, including professional sports, can operate without a live audience.

Residents in counties affected by the order can still go to the doctor, buy groceries, go on a hike or worship outdoors. K-12 schools that are already open can continue operating indoors at no more than 20% capacity. 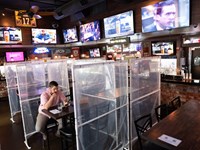 Once regions fall under the stay-at-home order, they have to remain under it for three weeks. The order can end once a county’s ICU capacity projected out four weeks is above or equal to 15%.

As of Sunday, all regions had less than a quarter of staffed ICU beds available.

On Thursday, Gov. Gavin Newsom said the order was needed to protect the state's health system as it braces for a surge of cases following the Thanksgiving holiday, particularly when it comes to intensive care unit capacity. As of Friday, more than 9,000 Californians were hospitalized with COVID-19 with 2,000 in the ICU, greater than at any time during the pandemic.

While the order limits what businesses and activities can remain open, similar to the March stay-at-home order, state Health and Human Services Secretary Dr. Mark Ghaly said the virus is more widespread than it was early on.

"Today's message is not about how we mix safely," Ghaly said Thursday. "It's about how we reduce our mixing altogether."

The ICU is the landing place for COVID-19 patients who need the highest level of care, and those beds need to be staffed by a certain number of specially trained providers, said Peggy Broussard Wheeler, vice president of rural health for the California Hospital Association.

“If you have patients in those beds, then you have to have the adequate staffing to be able to take care of those patients,” she said. “And that's where the crisis is going to be, is in staffing.”

According to state projections released Thursday, all regions of the state could reach the 15% ICU capacity threshold by the middle of December.