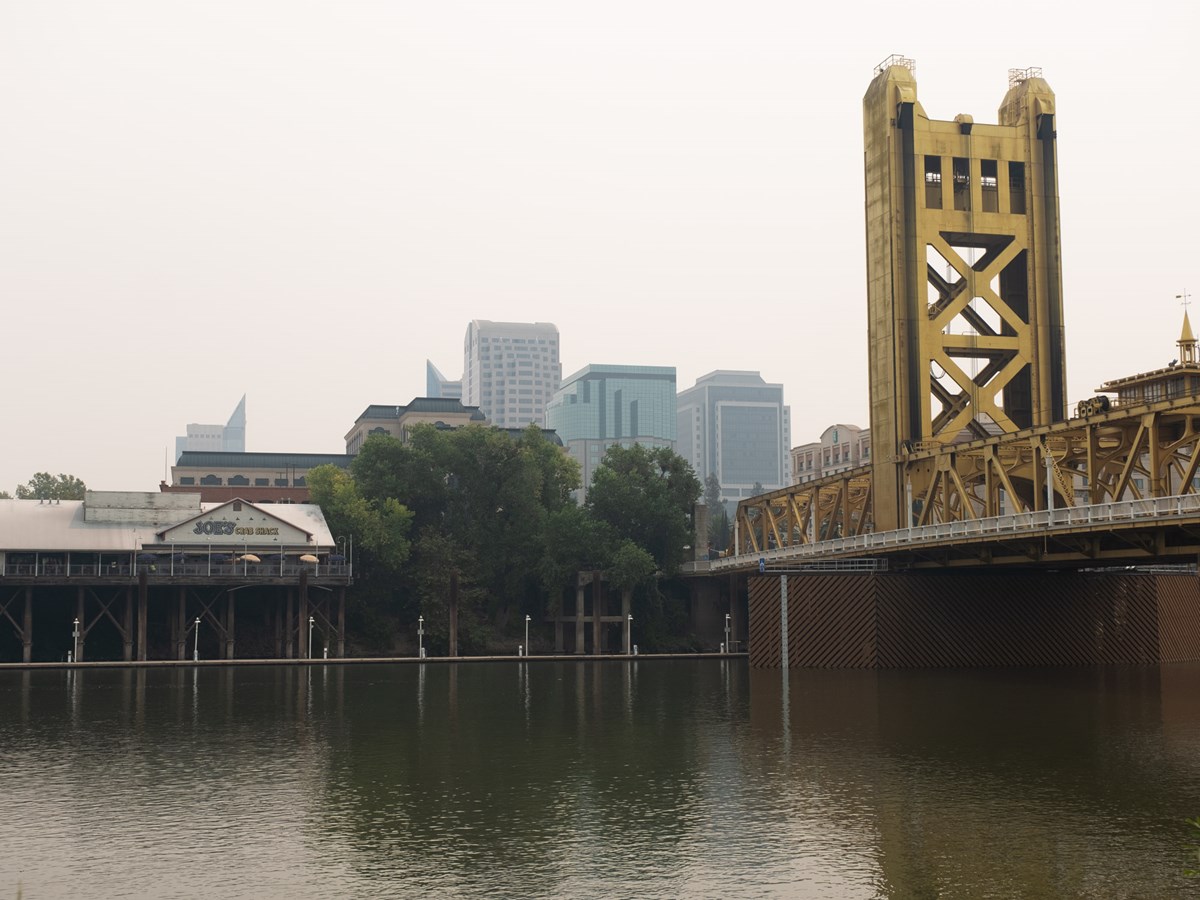 That upset activists like Phoenix Leri, an organizer with the youth-led climate group Fridays For Future Sacramento.

“We want to make it clear to our leaders that we can't take this slow,” Leri said. “For decades we've been either denying or ignoring climate change completely.”

The teens want Sacramento County to do two things: declare a climate emergency with the intention of becoming carbon zero by 2030, and have at least one supervisor agree to author the declaration and place it on the agenda of the first meeting of 2021.

Sacramento County does have a Climate Action Plan that’s been in the works since 2009. It was created to help California meet its climate goals of reducing emissions to 1990 levels by 2020 — which the state met in 2016. California upped that goal to 40% by 2030. 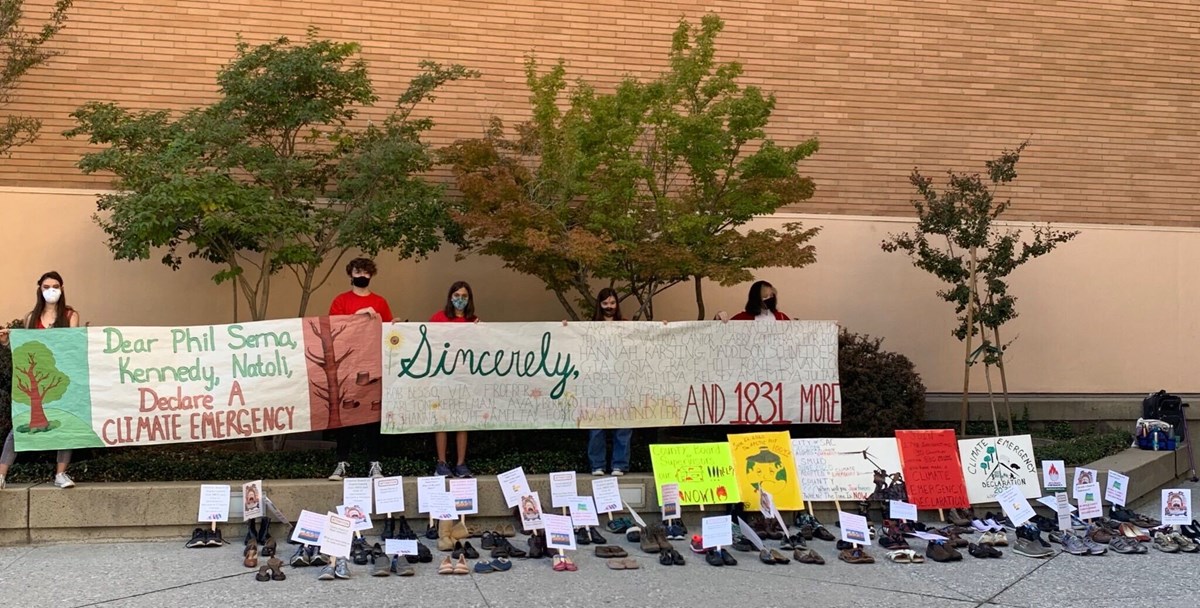 The county says it understands that increased emissions will result in conditions that will make life harder for Sacramentans. The plan states not addressing climate change will lead to “more extreme heat waves and more extreme storms, while also having less overall rainfall and less snowpack in the Sierra Nevada.”

The county’s plan is going up for public comment as soon as December, county spokesperson Laurie Slothhower said.

“The draft plan will have a number of robust measures to meet standards by 2030, and even more stringent standards by 2050,” Slothhower said. “We're following the state's lead on this.”

She says the county has already made some strides in curbing emissions, like converting 2,000 county cars, trucks and other vehicles to run on renewable fuel or electricity and helping establish a solar farm at the Sacramento International Airport.

After public review, the plan —  which Slothhower says would prioritize environmental justice and low-income neighborhoods — could go before the board of supervisors for a vote as early as July 2021.

But Leri, the youth activist, says the plan isn’t “loud and clear,” and doesn’t include a climate emergency declaration.

“Quite frankly, it's just not enough for what the moment needs,” Leri said, speaking of the 2020 wildfire season that’s burned more than 4 million acres in California. “Just stepping outside and looking at the air … it's getting worse year by year because of climate change.”

Sacramento Supervisor Patrick Kennedy agrees with the youth climate activists. He says a few of his colleagues are pushing for the climate action plan to get voted on “sooner rather than later.”

Kennedy said he would like the county to declare a climate emergency with 2030 goals as much as possible, just like Yolo County and the City of Sacramento. The cities of Sacramento and West Sacramento are working together on a joint effort to achieve carbon neutrality by 2045.

“By declaring a climate emergency, the county would be admitting that global warming exists, and that the measures that we've taken so far are not doing enough to limit climate change,” he said.

Because the consequences of not addressing climate change are both local and global, Kennedy says he is putting pressure on county staff to recognize the urgency. But Kennedy said that it would take convincing to get the entire board on the same page.

“At least two other board members are very interested in this subject,” he said. “I can't speak for all of the board, but I think that there is certainly the political will to move forward on this.”

CapRadio reached out to all the board members, but Kennedy was the only one available for an interview.

Chris Brown, with the Sacramento Climate Coalition, says the split nature of the board of supervisors means there tends to be a leaning towards more conservative thought.

“Part of organizing is to put enough pressure on them that they feel like they have to step up to the plate,” Brown explained.

Brown agrees with the youth climate activists — and Supervisor Kennedy — that the latter goals of decreasing pollution by 80% of 1990 levels by 2050 is still too slow when the effects of climate change are already present.

“This is not happening 30 years from now, it's already happening,” Brown said. He says a climate emergency declaration isn’t “the total solution,” but a first step in recognizing the “challenge in front of us” and an intention to speed up the process for the sake of all Sacramento residents.

Supervisor Kennedy says it’s vital for residents to show up in December to make their opinions known about the climate action plan and a potential climate emergency declaration.

“This is the most important issue facing us not just locally, but nationally, and even globally,” he said. “Whatever we fail to address [means] climate change will have ramifications across our local communities.”

Comments on Sacramento’s Climate Action Plan can be emailed to [email protected]​​.

What About Yolo County?

As the smokey air lingered acoss Central California, Yolo County quietly declared a climate emergency in late September. It accelerates climate action and funds a climate advisory board. The plan is to come up with a way to achieve a countywide carbon-negative footprint by 2030.

“We see climate change happening on a real time basis,” said Yolo County Supervisor Don Saylor of the 4-1 vote. The board also approved $50,000 to help fund the advisory committee.

The county joins 111 other cities and counties in the United States representing 24 states and about 11% of the country. Worldwide there are 1,790 governments within 30 countries who have declared a climate emergency.

This is huge. For a climate emergency resolution to get passed at the county level is something that other counties can look at and use as a model.

“Since August 17 we've been plagued by heavy smoke,” Saylor said. “The symptoms [of climate change] are all around us. We cannot avoid it. It is with us right now and so we have to take action.”

The climate emergency declaration is only the latest climate mitigation effort the county enacted. In 1982, the county adopted a clean energy plan, and three years later the county landfill completed what they call a “gas-to-energy” facility, that creates energy and captures 90% of methane emissions.

In 2007 the county pledged alongside 12 others to reduce greenhouse gas emissions by 80% by 2050, and in the same year created a climate pact with UC Davis and other districts. The county also adopted more than 350 policies that deal with climate change in a 2009 General plan, including a Climate Action Plan.

The Yolo County Climate Emergency Coalition — a group of more than 100 people representing farms, education, businesses, faith-based groups, the science community and youth — presented an emergency declaration to the county in March. They worked with county staff on it.

“We are on the frontlines of the climate emergency,” said Juliette Beck, an organizer with the coalition. “This resolution now puts in motion a collaborative response that centers the needs of our most vulnerable populations and provides pathways for a healthy, climate-positive recovery.”

“I'm concerned that if we wait till 2030 to meet a pretty basic goal that it will be too late,” he said. “Our little resolution was a good milestone. But that's all it is. The work lies before us.”

Saylor says a sustainability plan currently being worked on is one place where the climate advisory board could speed up some of those processes.

Adelita Serena, a Woodland-based organizer for the climate action group Mothers Out Front, was a key player in writing the resolution.

On one hand, she’s excited about it.

“This is huge,” she said. “For a climate emergency resolution to get passed at the county level is something that other counties can look at and use as a model.”

But on the other hand Serena says the resolution could have been stronger. As an Indigenous woman and mother of two sons, she says she wants to see further divestment from fossil fuels before “it’s too late.”

“We did the best that we could,” she said. “We took advice from some county staff about what would be the best language to get it passed. In the end that was our goal so we could move on to the next steps, which is the real work.”