Sacramento County first advised residents on March 17  to stay in their homes unless absolutely necessary. The county followed that advisory up with a legal order on March 19, the same day California also issued its stay-at-home order.

Six months later, as the threat of COVID-19 lingers, every California county is still in the process of trying to reopen.

Even before the county and state orders, schools shut down. Elk Grove Unified School District, Northern California’s largest school district, was the first to shut down because of the looming threat of COVID-19.

Months later, district superintendent Christopher Hoffman,said the initial decision has been the hardest time for him during the pandemic.

"I will say I actually slept a little better that night knowing our kids and our staff were going to be safe for that next week," Hoffman said. "You know, while we gathered more information to figure out what the rest of the spring was going to look like. But that was tough."

California now has a new reopening plan with rules for schools, businesses and other gatherings. The four-tiered approach is marked by colors. Purple indicates the most risk and yellow the least. Each tier represents a level of how open businesses can be. About 16 counties are in the second tier, 10 in the third and only two counties have minimal risk: Alpine and Mono counties.

Sacramento County and the state of California were seen early on as leaders in "bending the curve" and limiting the number of new infections. But that began to change late in the spring into the summer as counties began to slowly reopen.

"In April, we started seeing an increase in cases, the beginning of June, and that peaked," Sacramento County Public Health Officer Dr. Olivia Kasirye said. "By the end of July, where we were getting as many as 300 cases per day. And there's been a steady decline since then. And actually, last week, for the first time in two months, our total number for the entire week was less than 1,000."

Kasirye says Sacramento County could be leaving the purple tier around the middle of October. The county is reporting nine cases per 100,000 residents each day but must improve that to seven before the state will change its status.

“At the rate that we've been going, we feel that we can make that within the next couple of weeks. And our positivity rate is at 5.7%," Kasirye said. "And so we have hit the mark to be able to move into tier two."

She's hopeful that if residents follow public health recommendations — including wearing face coverings, staying six feet from other people and washing hands — the county can move tiers soon. She also advised people to avoid large private gatherings, which was a main driver of cases during the summer.

The pandemic and the inability to contain the virus has also had a huge impact on businesses and workers. In Placer County, which is currently in the red tier for having substantial risk, some sectors can reopen, but with limited capacity.

Alex Hunt, co-owner of Mountain Slice Café and Creamery in Tahoe City, transitioned to selling take-home pizza kits in the spring. Now that Placer County has moved into the second tier, the business can reopen at 25% capacity, though he said takeout is still their main business and has been going well.

"However, currently we are dealing with all the closures of the trails and the campsites and all the all the state run parks right now because of the fires," Hunt said. "And so we are definitely feeling a little bit of a slowdown from that. But as far as the grand scheme of everything goes, we're doing not too bad right now."

But all these months later health experts say mixed messaging from the White House and the Centers for Disease Control and Prevention is confusing the public.

UC Davis Health CEO David Lubarsky told CapRadio’s Insight program Thursday that a recent statement by President Donald Trump that a coronavirus vaccine could be ready in a few months is false. The head of the CDC said it wouldn’t be until the third or fourth quarter of 2021.

"I think that there will be a successful vaccine candidate identified, or hopeful that there will be," Lubarsky said. "I'm confident that eventually it will be shown to be safe and effective. And I'm equally sure that it will not be sufficiently widely distributed to achieve the type of herd immunity that would cut the pandemic out of our society in short order."

Lubarsky said the conflicting messaging during the pandemic has complicated operations at the medical center.

"The interchange between our president and the head of the CDC encapsulates much of what the entire problem has been with the nation's response to the pandemic," he said. "We continue to get people who don't understand the most simple basics about trying to stay healthy because there are conflicting messages from the top."

He says wearing a mask and staying six feet away from people is still the best medicine.

"It's really not complicated, and the rest of the world has gotten it right," he said.

Photos: What It's Like Voting At The Golden 1 Center 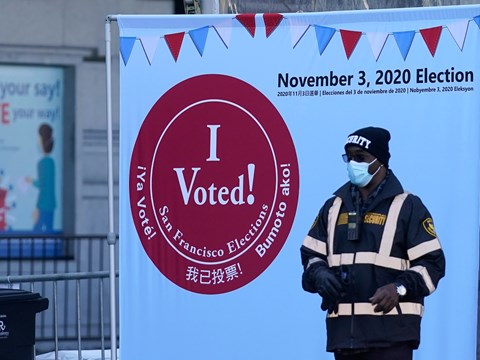