Inspired By The Movement For Racial Justice, Two Sacramento Artists Paint Their Message

When Adrian Marquez steps outside his apartment, a mural of his niece June greets him from across the alley with an animated smile. One arm lifts to the sky, and her facial features are accented with purple and teal tones. Tucked between backyards and trash bins, the portrait is a dedication to a child’s unfiltered joy.

Marquez painted it on a neighbor’s shed in 2018, and although it’s in a section of Midtown Sacramento that sees plenty of foot traffic, it has remained a hidden gem in the city’s growing collection of murals.

Now, a powerful image of another little girl stands 11 feet high on an adjoining wall of the shed. Her name is Gianna, and she is looking over one shoulder as dandelion seeds blow past. The six-year-old’s bittersweet proclamation stands out against a dark purple background:

“My daddy changed the world.”

When Minneapolis police officers killed George Floyd in late May, radical change was the focal point of many protests. About two months into the COVID-19 pandemic, huge crowds of activists and demonstrators hit the streets to support the Black Lives Matter movement. As Marquez’s new mural went up in early June, statues of slave owners and colonizers toppled in Sacramento and nationwide.

Art reflects the complexities of its time. And now, as the country grapples with a pandemic and confronting white supremacy, Sacramento artists are responding to the moment.

Through the first half of 2020, Marquez had no motivation to paint, even though his studio apartment is filled with his work, some going back to high school.

“It’s put me in a gnarly funk,” the 32-year-old said of the pandemic. “I’m sure everyone’s mentality has changed over these times.” 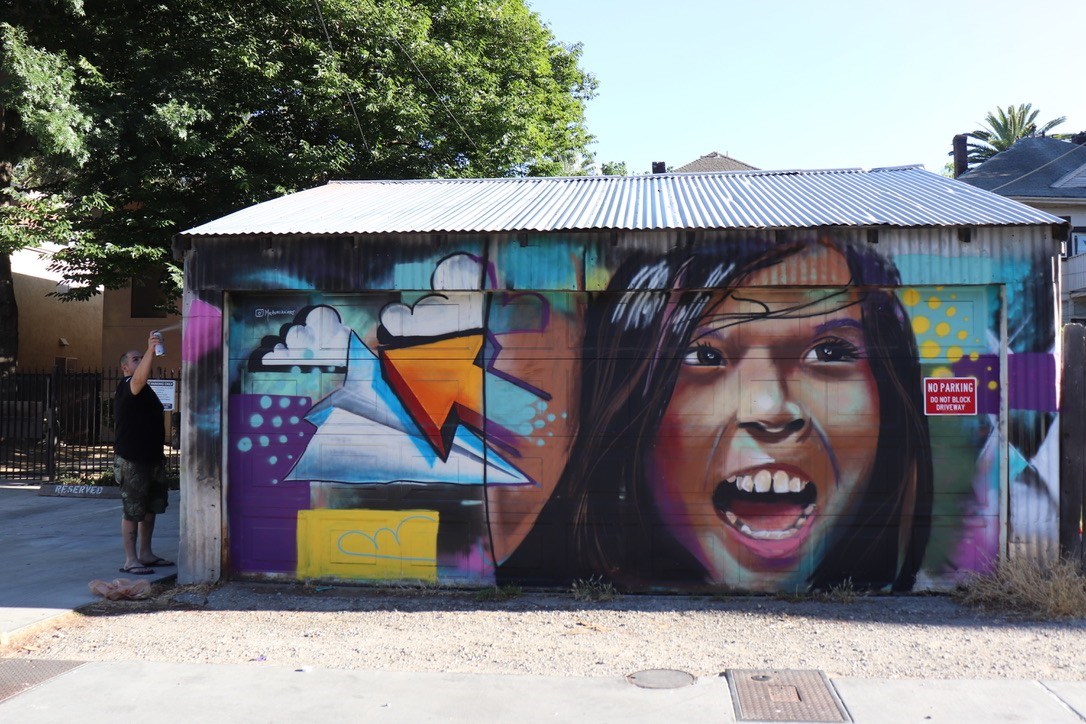 Adrian Marquez painted this mural of his niece, June, in 2018. Here, he works on another mural commemorating George Floyd.Kate Gonzales / CapRadio

A cake decorator by trade, Marquez has worked full time at Nugget Market during the pandemic and quarantine. That experience had its own pressures. He says working for hours under a mask gets uncomfortable, and he’s noticed people overall seem more irritable.

As an uncle, Marquez also thinks a lot about how kids are processing all of it. When he heard what Gianna Floyd had said about her father, he wanted to echo her message.

“What happened to her dad completely changed the world,” Marquez said. “And that’s the inspiration for this piece.”

The day when Marquez finished the Gianna Floyd mural, he’d been up since 3:45 a.m. for work. It was early evening as he completed the final details. A few neighbors who passed him at Powerhouse Alley near 16th Street complimented the piece.

It’s change that has been a long time coming. 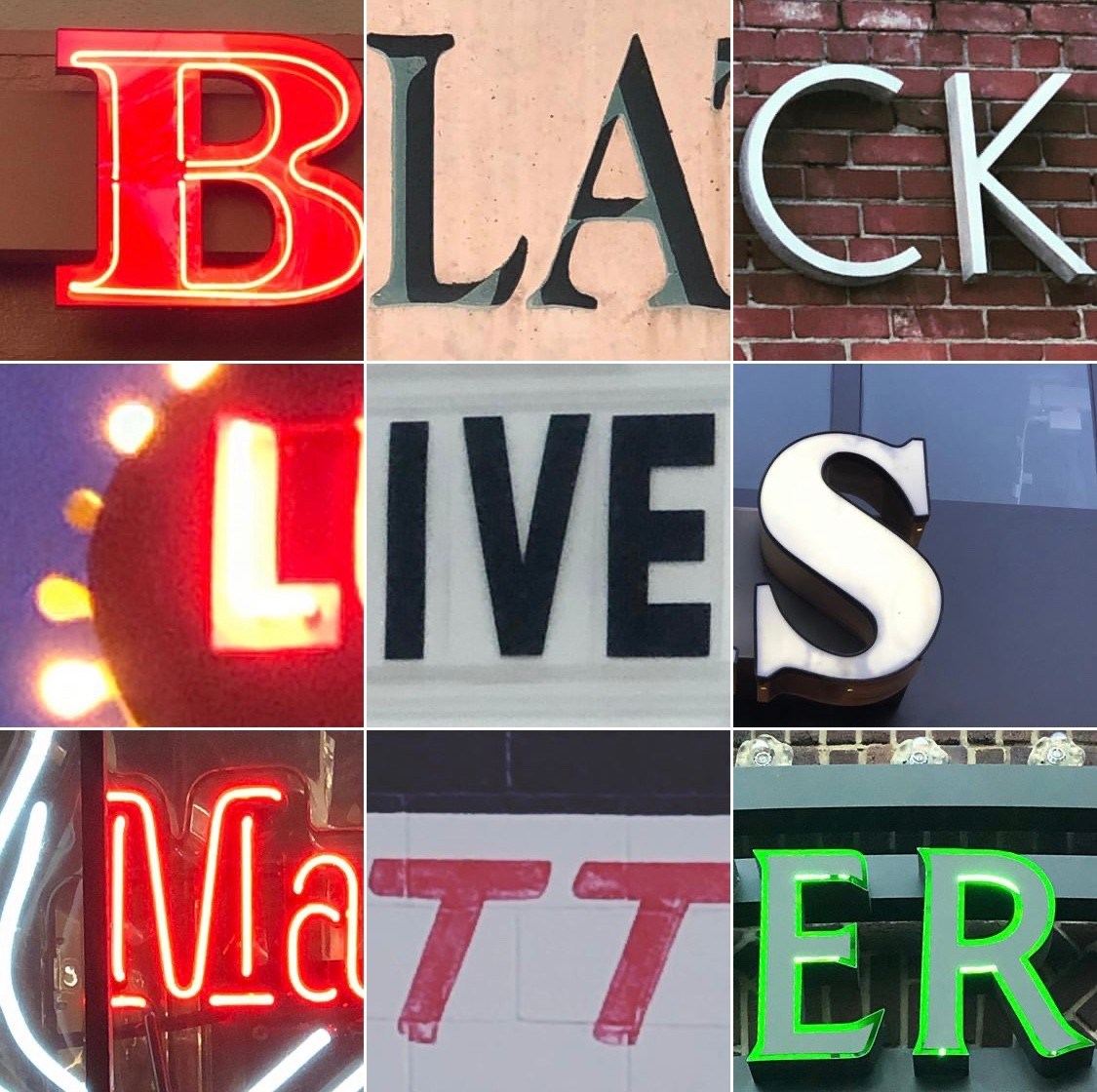 Artist Gioia Fonda takes photos of lettering around Sacramento to spell out “Black Lives Matter.” This grid was created from signage in Oak Park.Courtesy of Gioia Fonda

On June 2, Jupiter Lockett posted a photo of Emmett Till, a 14-year-old boy who was lynched over 60 years ago. Like Marquez, Lockett had fallen into a creative lull during the pandemic, but for different reasons.

Lockett, who works under the artist name Jupiter, had recently returned from his first international artist residency in France when the pandemic hit. He was preparing for a show at B. Sakata Garo gallery in Sacramento. Inspired by visuals of items like Clorox bleach and Corona beer bottles, Lockett figured it would be a focal point of the show in August.

“Then the killings and all the racism boiled up,” he said. “It’s just like, every week there are multiple killings of Black people.”

In February, white men shot and killed Ahmaud Arbery, who was jogging through a neighborhood in Georgia. That video went viral in May.

Lockett, a 35-year-old Black man, stopped jogging to Land Park and walking to the grocery store. He also stopped painting.

“I have to sit with those emotions — that hurt, that anger, that sadness,” he said.

When he began painting less than three years ago, Lockett drew inspiration from Jean-Michel Basquiat, the late neo-expressionist of Haitian and Puerto Rican descent. Attracted to his visual simplicity and deep meaning, Lockett has emulated Basquiat’s style in depicting Black lives.

“I try to stay so, so simple, so elementary, and say the deepest, most complex stuff,” he said.

He says art is his therapy: It slows him down, allowing him to process trauma and pain. It was his outlet after his mother died in early 2019. Through the fog of the moment, Lockett is slowly finding the drive to turn to art.

“It’s like I have a mission, there’s a calling over my life right now,” he said. “It comes from a place of horror and pain.”

One of his recent acrylic paintings depicts aa Black man, abstract, naked and slumped in a corner. Lockett says the colors and pattern represent a police car, the nudity an expression of white ideology repressing Black masculinity. It shares its title, Strange Fruit, with the famous Billie Holiday song about lynching. He says another recent piece, The Brainwashed Negro: LDB, bluntly expresses his ridicule of the hypocrisy of Black cops. 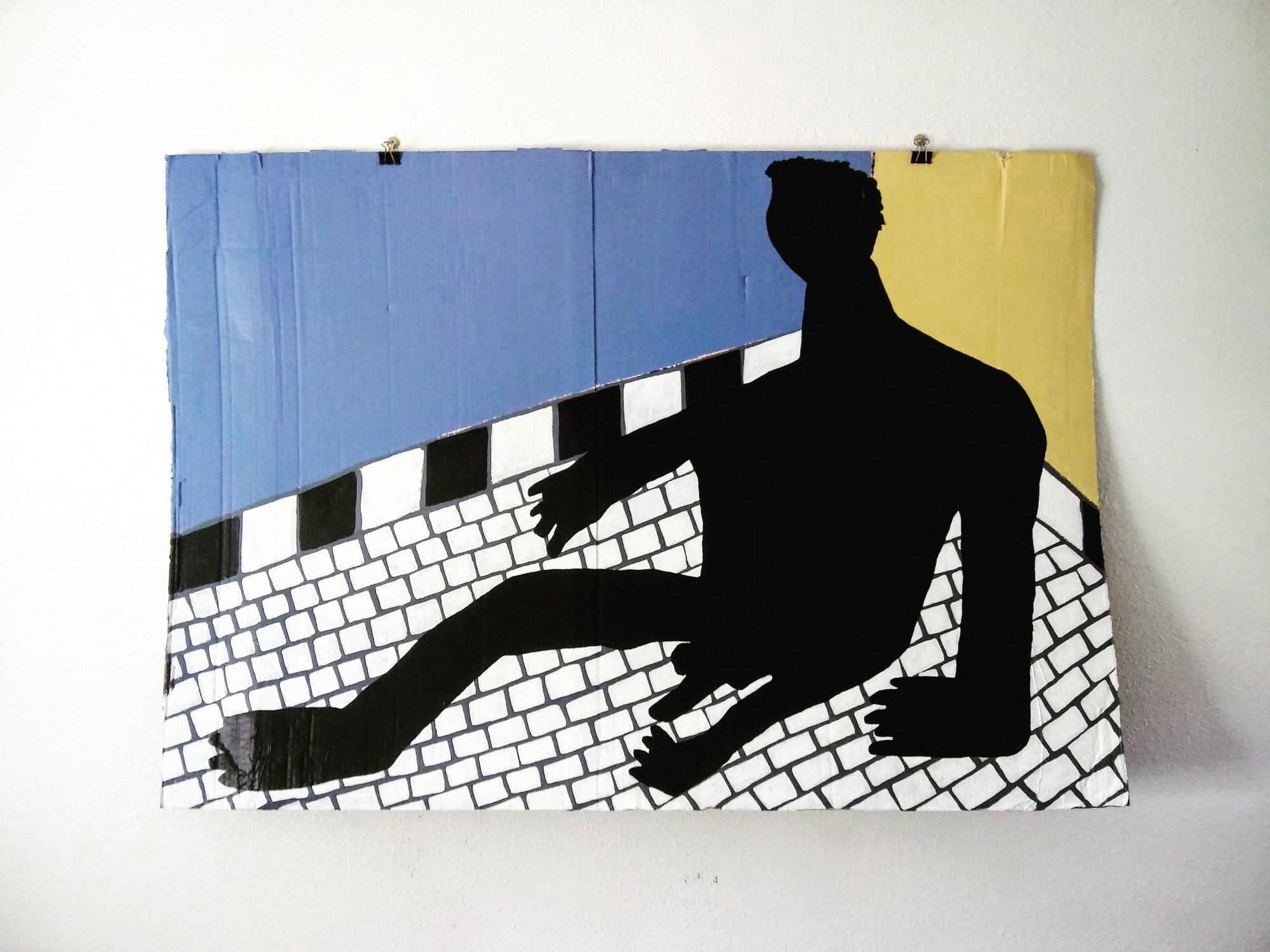 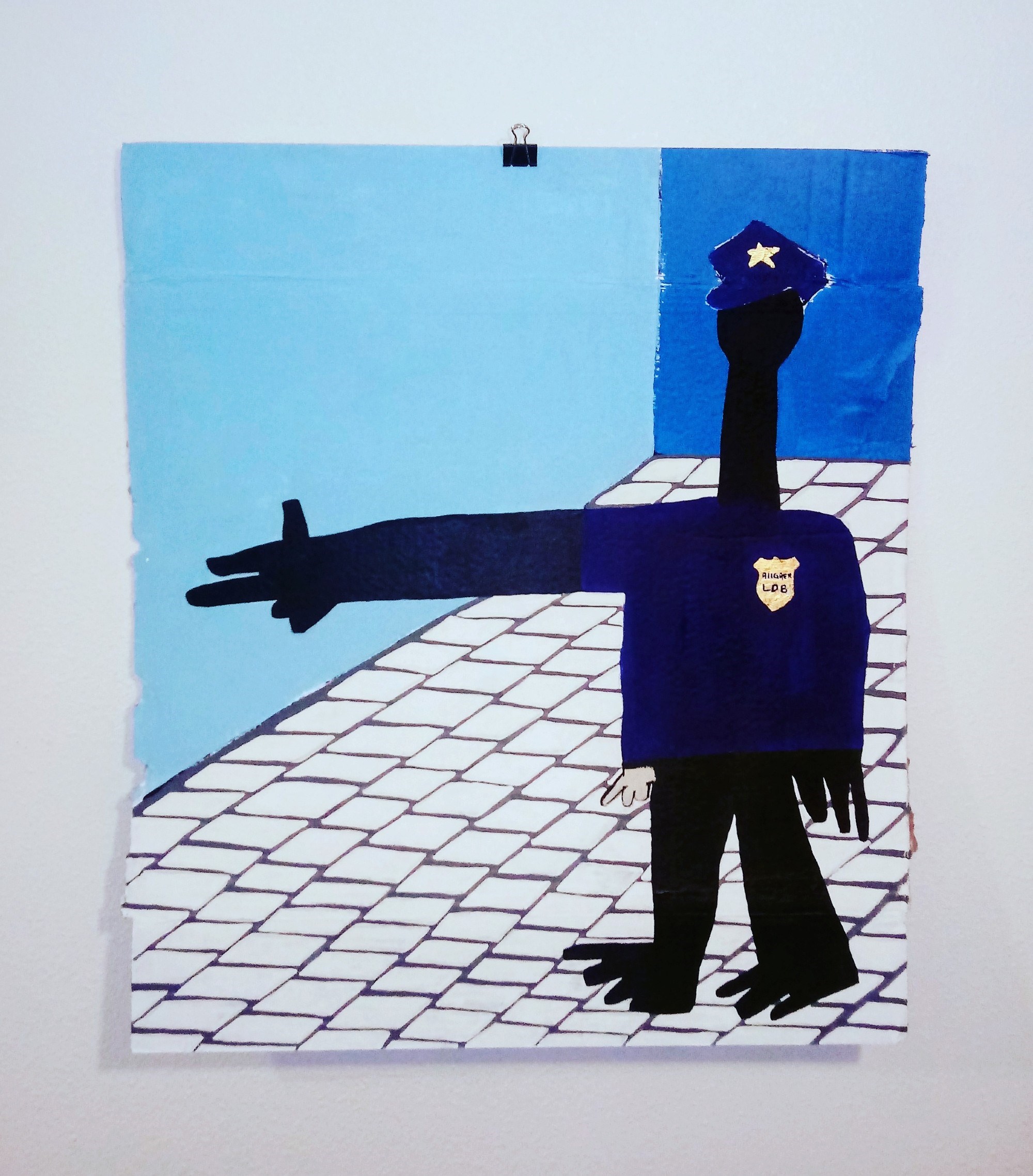 “I can’t ignore it,” he said, adding that his latest works are unapologetically Black, a theme that influences a majority of his August show. “When I was worried about hurting peoples’ feelings, my art wasn’t talking. …

“Once I started being true to myself, it started to speak.”