Demonstrators begin to disperse, about 90 minutes after curfew

Demonstrators gather downtown for another evening of protests

West Sacramento suspends curfew, but likely to reinstate this weekend

9:50 p.m.: Demonstrators begin to disperse, about 90 minutes after curfew

Demonstrators in downtown Sacramento began to disperse at around 9:30 p.m. Wednesday, about 90 minutes after the city’s 8 p.m. curfew.

Protesters are calling it a night, leaving from Cesar Chavez pic.twitter.com/hEkWnq5MOI

People gathered downtown both in Cesar Chavez Plaza and near the east steps of the Capitol to protest the killing of George Floyd by Minneapolis police.

At a demonstration in Cesar Chavez Plaza Wednesday night, incoming Sacramento City Councilmember Katie Valenzuela said that the city “took the absolute wrong approach to this.”

Valenzuela said that, had her term as a councilmember already started, she would have voted against imposing a citywide curfew or bringing in the National Guard.

Valenzuela, who will represent the central city when she takes office in December, would have been the lone vote against the curfew.

“The way to deescalate the situation is by putting your gun down — not by picking up 500 more,” Valenzuela said of the 500 National Guard members deployed to Sacramento due to the protests.

Valenzuela also called on the city to eliminate chokeholds as an arrest tactic, and said she wants Sacramento to adopt a stronger standard for police use of force than the one set by AB 392.

Valenzuela left the protest before 8 p.m. in order to abide by the curfew.

6:59 p.m.: Demonstrators gather downtown for another evening of protests

Demonstrators are gathering in downtown Sacramento tonight to protest against police brutality following the killing of George Floyd, the seventh day of events in the city.

One group marched to Cesar Chavez Plaza, which has been the site of many peaceful protests over the past few days.

Demonstration is starting off with invitation for people in the crowd to speak on stage.

They’re sanitizing the mic after each speaker. pic.twitter.com/QubZNOffgY

Another group gathered at the east steps of the California state Capitol, where they knelt before a line of police officers in protest of Floyd’s death.

Demonstrators near the east steps of the California State Capitol in Sacramento are kneeling in silence to protest the killing of #GeorgeFloyd by Minneapolis police.

As demonstrators gather, Sacramento’s citywide curfew remains in effect from 8 p.m. tonight to 5 a.m. tomorrow morning. Protesters out past 8 p.m. could be arrested for violating that order. More than 20 people were arrested Tuesday night, and 50 were Monday on the first night of the order.

One demonstrator, Ashley Amaro, said protesting is necessary in spite of that risk.

Ashley Amaro knows there’s a risk to protesting right now, esp as many plan to stay past the city’s curfew.

She says she’s willing to take that risk bc some of her friends take risks simply by leaving their homes every day.

The city of West Sacramento is suspending its overnight curfew for Wednesday night. The city anticipates that, based on monitoring of local and regional events, it will likely suspend the curfew for Thursday night as well.

However, the city expects that it will reinstate its curfew from Friday night through Monday morning, but will modify the hours to be from 10 p.m. to 4 a.m. The city’s original order placed residents under a curfew from 8 p.m. to 5 a.m.

As demonstrations over the death of George Floyd have remained largely peaceful in recent days, some California cities and counties have started to reduce or plan to end curfews.

But other jurisdictions expect to extend curfews out of caution.

The city of Sacramento’s 8 p.m. to 5 a.m. curfew continues to remain in place, with no plans as of now to end it. Los Angeles County renewed its overnight curfew today, but pushed its start time back three hours from 6 p.m. to 9 p.m. The city of San Francisco plans to end its curfew Thursday morning.

In one significant exception to the peaceful trend, Vallejo is reeling from a second straight night of violence. The city has brought in 50 National Guard troops to reinforce local police.

It starts at 11 a.m. at Oak Park Community Center.

He talked about the George Floyd protests on CapRadio Insight. He told host Beth Ruyak that the people who are demanding justice for the police killing of Floyd are not being heard.

“Part of the challenges we have is that law enforcement has a tremendous amount of power and oftentimes we don’t listen,” Hahn said. “That’s what makes the frustration boil over until you do things you wouldn’t typically do.”

Hahn said police did not see any property damage from Tuesday’s night protest, which ended more than an hour after curfew.

He also said there are "legitimate protesters" who are distancing themselves from people who smash windows and steal property.

“I heard protesters say don’t call them protesters, because they are not,” he said.

Hahn added: “When I say legitimate protesters, these people who care about the people in this community. They may be very angry, they may be very frustrated, but they care. They don’t have this coordinated response to destroy.”

After people marched through the streets of Sacramento on the second night of the curfew, officers arrested 24 people.

The George Floyd protests wrapped up more than an hour after the curfew that started at 8 p.m. Stevante Clark led the crowd and helped keep the peace during the demonstrations.

Here’s the breakdown on arrests so far:

Grant Napear has resigned as announcer for the Sacramento Kings and was fired from radio station KHTK Tuesday after making controversial statements on Twitter.

Napear tweeted his  response, in capital letters: “ALL LIVES MATTER.”

Many believe the phrase undermines the movement’s message about inequality and police brutality against African Americans.

The longtime announcer, who called Kings games for over three decades, faced an immediate backlash on Twitter, including from former Kings star Chris Webber.

Napear was first suspended by the Kings, then later resigned as its play-by-play announcer.

He did not respond to a request for comment. 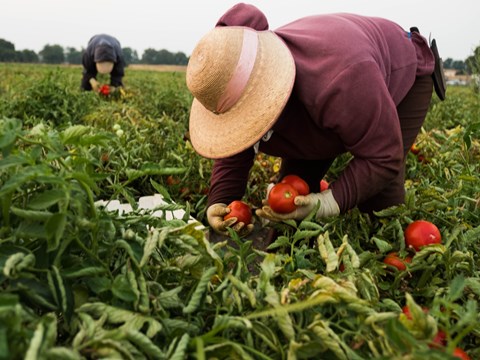 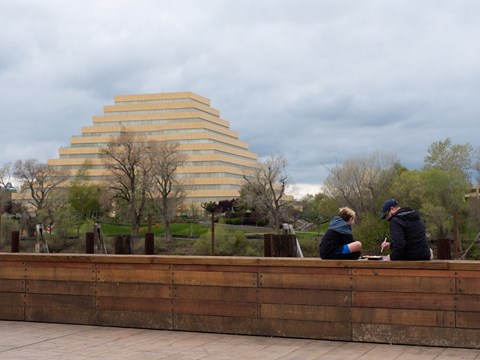 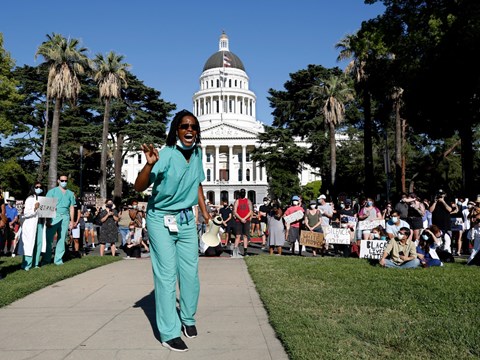 As Demonstrators Call For Racial Justice, Some Doctors Push For Equity In Health Care