Demonstrators in South Sacramento marched for more than six hours Friday night and into the morning, at times facing off with police in ruggedized gear and momentarily blocking traffic on Highway 99 before law enforcement declared an unlawful assembly, firing flash grenades and pepper balls to break up the remaining protesters.

The protest against police brutality took place in solidarity with national demonstrations that began earlier this week after the killings of George Floyd in Minneapolis, Breonna Taylor in Kentucky and Ahmaud Arbery in Georgia.

The demonstration began around 6 p.m., with hundreds of marchers gathering at the Oak Park market at the intersection of 12th Avenue and 33rd Street, before moving down Franklin Boulevard.

Around 7:30 p.m. the crowd gathered in the parking lot of the Sacramento Police Department South Command Center on Franklin. Demonstrators raised a Black Lives Matter flag from the pole in front of the facility.

For a time the crowd gathered in the parking lot, with officers standing between them and the building. At approximately 9:20 a group of demonstrators moved to block traffic through Franklin Boulevard, eventually returning to the Highway 99 overpass at 12th Avenue.

Crowd chanting: “Who do you protect? Who do you serve?” pic.twitter.com/7nLCliW11w

Around midnight a confrontation broke out between demonstrators and police after a vehicle tried to move through the crowd and was damaged by protestors. Officers used flash grenades and several protesters threw bottles.

Scuffle veteran protesters and police shortly before irritant was used.

Police were trying to move white SUV from crowd. Some bottles, firecrackers and water thrown at police before this. pic.twitter.com/nMWJY5pp54

Soon after a group moved onto Highway 99 at 12 Avenue, blocking traffic for a short period of time before returning to where the demonstration started and dispersing around 1 a.m.

The demonstrators appeared to cause little or no damage to local businesses as protests across the country on Friday saw substantial vandalism and looting, including ones in Oakland and Los Angeles.

The Sacramento Police Department said seven officers were injured by thrown items such as bricks or rocks, which led to one arrest. That does not include arrests that could have been made by the California Highway Patrol. CHP has not yet released information on any possible arrests.

'Something Has To Change'

Sacramento's protest was just one of many that took place across the country Friday night.

“We’re here because I’m angry, I’m frustrated and something has to change,” said Lynette Hall, an Oak Park resident who came out to demonstrate. She added that though the officer who was videotaped kneeling on the neck of George Floyd was arrested and charged with murder earlier today, his arrest wouldn’t change the message of the event.

Antwan Warrack brought his 15-year-old son so he could "understand what it’s about instead of just seeing it on TV."

“At the end of the day I’m hoping that he has an understanding to see that there’s injustice in the world and he needs to try to do what he can as an individual to try to change some of these things as he gets older,” Warrack said. 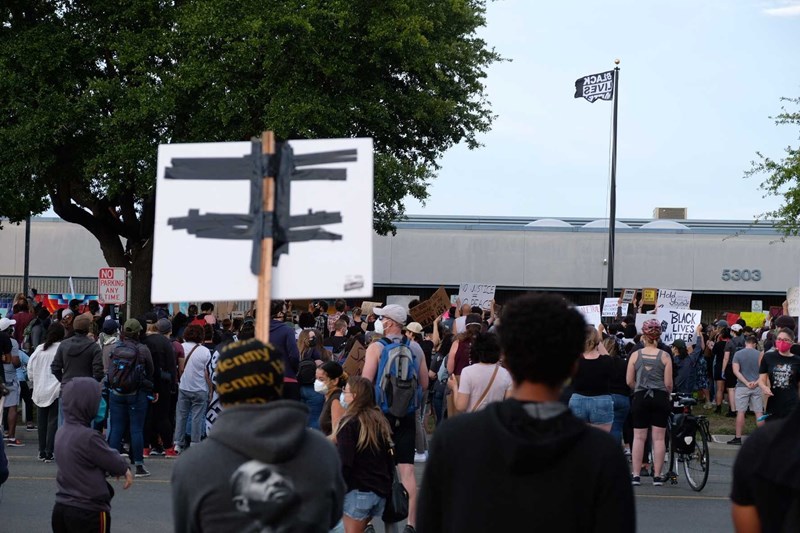 Some people present expressed concern over the protest happening in a neighborhood that has a population vulnerable to COVID-19 while California is still under a stay-at-home order to limit the spread of the virus.

“I came out because I want to make sure people are safe out here, we’re still in the middle of a pandemic,” Keyan Eliss, another person out at the demonstration, said. “Lack of social distancing, I’m concerned particularly in a pandemic where black people here in Oak Park are more likely to be affected by COVID and potentially die from COVID, it’s really concerning to me.”

Earlier, organizers of the event, Black Lives Matter Sacramento’s Tanya Faison said they were aware of the protest taking place in a pandemic but that the need to voice support outweighed the risks.

“I feel these stay at home orders have hindered us fighting for the things we need to fight for over the past couple months,” Faison said. “So, it’s just overdue.” 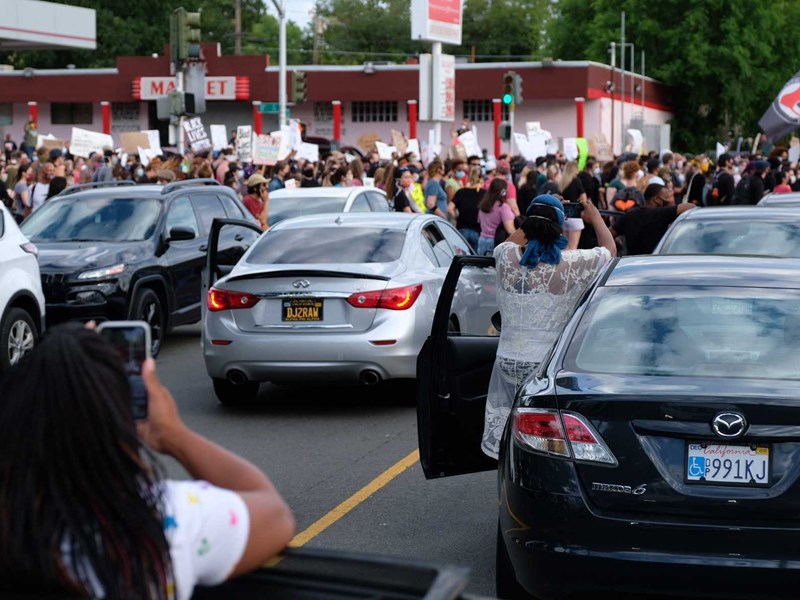 Demonstrators march in Oak Park at a ‘Solidarity With Minneapolis’ in response to the killing of George Floyd.Andrew Nixon / CapRadio 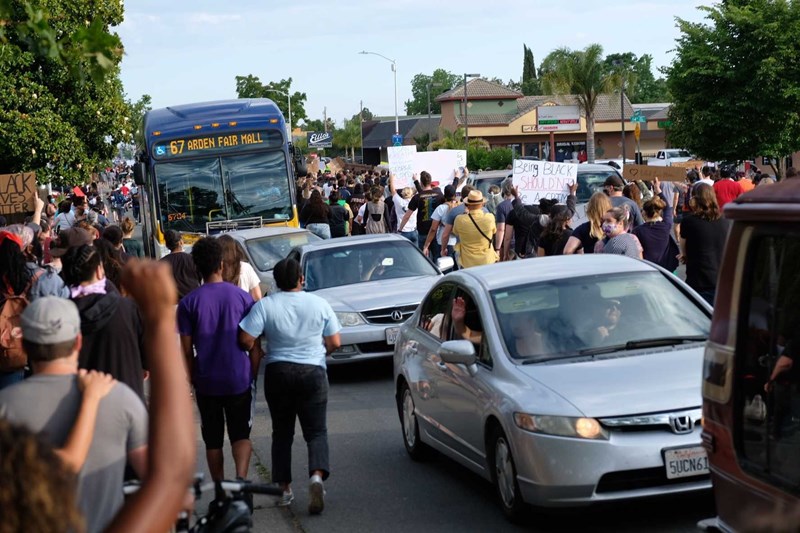 'Same Experiences All Over The Country'

Local organizers said they are asking for changes in local and national policy to protect black Americans from being brutalized by law enforcement officers.

“People are looking at each issue as singular issues, and all these issues are the same experiences all over the country, so we have to be in solidarity with our black community that’s in Georgia right now and in Kentucky, we need to stand with them, it’s time now,” said Tanya Faison, founder of Black Lives Matter Sacramento.

Sacramento has not been without its own struggles with police violence against the black community. Stephon Clark’s death sparked national headlines and weeks of demonstrations after he was killed by a police officer in Meadowview, and just last month an officer in Rancho Cordova was videotaped repeatedly punching and throwing a 14-year-old boy.

Berry Accius, community activist and founder of local nonprofit Voice of the Youth, added that these incidents and the lack of permanent action has left many people frustrated and angry.

“The reality of what you see is centuries, decades of this cancer that has not been treated appropriately. We may treat the symptoms every once in a while, but we have not went and got the cure,” Accius said.

Organizers say it is not their intention for Sacramento’s demonstration on Friday to take light away from the action happening in Minneapolis, but just to show support.

“When officers start seeing repercussions for their actions, then we’ll see it happen less. But the way things are escalating right now,” Faison said. “I feel like we need a revolution, we need to get rid of the system we currently have, and forever it’s always been on the back of black and brown people and that’s not going to change unless we have something new in place.”

Ajiah Anderson, a Sacramento resident who says she has been friends with Stevante and the late Stephon Clark since childhood, was at the demonstration Friday. She said the purpose of her coming out was to show “unity” in light of the George Floyd murder.

“We need to come together and stay together,” Anderson said.

She said there’s a long way to go to address prejudice and inequality. But Anderson believes Sacramento has made progress since the shooting of Clark, so there’s some room for optimism.

“I hope that this gives [people] hope that there’s going to be a brighter future,” she said.