For many people, the orders to stay at home to avoid spreading or getting COVID-19 have meant more nerves, more eating, more drinking, and more of lots of things that aren’t good for you. But instructors in activities like qi gong, tai chi and yoga say there’s a better way.

It’s hard not to feel more peaceful in the presence of Eileen Hancock.

During a recent lesson, the master at Body Balance Academy in Grass Valley tells students to “Breathe in deeply” and then lifts her hands with both palms facing skyward, slowly, inhaling. Then she turns her hands over and slowly pushes them down as if pushing down gently on a large invisible obstacle.

“Feel the chi drop, washing down through you. Inhale. Pump the chi back up,” she says as she began to inhale and repeat the motion again.

Hancock is the owner and master — or shih fu — at Body Balance. It offers classes in the inner body disciplines of qi gong, tai chi and the outer body with kung fu. The COVID-19 stay-at-home orders forced her to consider what to do now that the building she just bought couldn’t be used for classes. So, she decided to put them online. It was a change in more ways than one.

“I’d say one of the biggest changes is I’m not a person who’s usually a slave to my device and currently I am,” she says, laughing. “I definitely have to make sure they’re charged all the time and the connection is good so we can keep everybody training.”

She says attendance is about 90 percent of what it was, but sometimes it’s better.

“I think part of that is people have time and they also really need to practice something that gives them mindfulness and also able to be focusing on their health and well-being,” Hancock says. 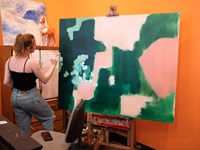 How To Cope With Anxiety, Loneliness During California's Stay At Home Order

Mercedes Cabral is one of her students, and at 63 has been practicing for eight years. Gov. Gavin Newsom’s orders to stay home made her nervous, as did the thought of not being able to see her grandchildren who visit her fairly regularly from their home in the Bay Area.

But the coronavirus makes her even more worried because she has chronic obstructive pulmonary disease. That puts her at greater risk of pneumonia or death should she develop COVID-19.

For five years, she says she has soothed her soul and kept the effects of COPD at bay by religiously doing exercises several times a week, using deep inhaling and full exhaling techniques.

“Tai chi is a moving meditation and it’s breathing and it’s being present,” Cabral says. “It’s a martial art, which I truly didn’t even realize when I signed up.”

Little did she know how important it would be when she and her husband signed up. “I just thought it would be something that we could do, like, for the rest of our lives,” lives that are better off for their dedication to these exercises, she says.

“Meditation and other kinds of mind-body practices can reduce the inflammatory response by inhibiting a molecule called NF Kappa B, which is a transcription factor that controls gene expression of pro-inflammatory genes in the body,” Dossett says. By reducing inflammatory response, Cabral stops the COPD from getting worse.

Even if the classes didn’t have a medical benefit, Cabral says she’s grateful her shih fu is now online.

“People have had to give up going to their gyms and we’re just really thankful that we can still do our classes in our home,” she says.

For in-person classes, students come from miles around. That stopped being an option a couple of years ago for Matthias Schossig when he moved back to Germany, 5,500 miles away.

Toward the end of his 30 years in the states he had begun to teach at Body Balance after being a student for years. He says he had been unable to find anyone quite like Shih Fu Eileen back home and was thrilled to receive an invite to the first digital class.

“We went online. She was over there. I was over here and the group was on the side in windows and we did the form together,” he says. “She showed us some new stuff and it worked pretty well. It was actually amazing.”

Schossig, Cabral and Hancock are all well-aware of studies that back up the notion that the exercises in general not only feel good, but they’re good for you.

Dossett with UC Davis Medical Center says qi gong, yoga and other mind-body exercises have been proven scientifically to make people healthier. That could help them fight off an infection, but she says there aren’t any studies to show whether starting qi gong or yoga could help treat COVID-19 once you have it.

‘These kinds of activities might help to reduce the impact of a COVID-19 infection,” Dossett says.

Jen Healy is a life coach and founder of Zen Healyng Technologies in Davis. She’s also the creator of the Aerial Yoga RX program. She says it allows people of all physical abilities to practice the ancient exercises using a group of slings, or swing, that hang from the ceiling or the support beam of a porch.

Typically, she charges $150 per phone or video session or $5,000 for people to stay at her house for life coaching. During this stay-at-home era, she’s taken to YouTube with a free series of five-minute COVID-19 pep talks.

“The life hack I like the most is really simple,” she says. “Every hour on the hour, get up, drink a glass of water. Go for a walk. Jump up and down. I love the rebounders and my yoga swing. But move the body.”

According to Healy, short segments of time in motion will add up to a healthier you.

“(It) just takes five minutes,” she says. “It doesn’t have to be a whole half hour or anything like that.”

Healy also suggests cutting out mindless television programs and adding inspirational audio listening sessions helps people overcome the depression of isolation. She also suggests adding baths each week for relaxation. For people who have to have coffee in the morning, she recommends coffee lattes with protein powder, fruit and evergreens for nourishment.

Both Healy and Hancock say the new technology doesn’t replace the connections people make in person, but it’s close enough for now.