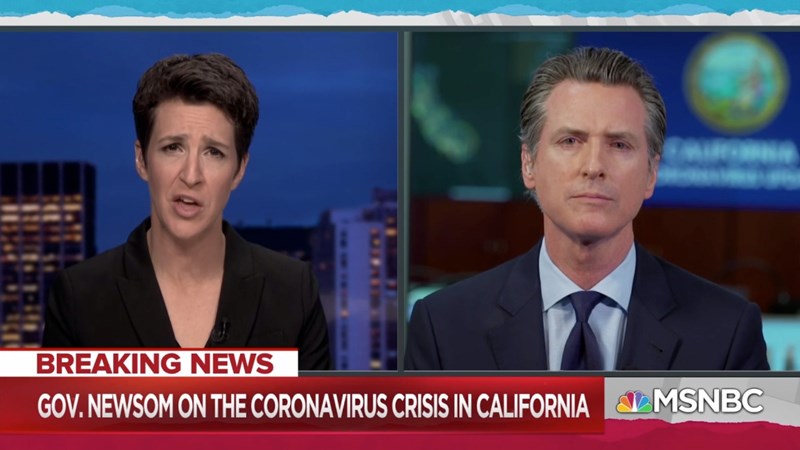 Many California lawmakers did not know about a massive $1.4 billion deal for hundreds of millions of protective masks — until Gov. Gavin Newsom announced it on MSNBC’s "The Rachel Maddow Show."

“Maybe 45 minutes before he went on 'Maddow,' my office got a heads up,” Democratic Assembly Speaker Anthony Rendon told CapRadio on Thursday. “But, I can’t call the members in 45 minutes.”

Newsom’s announcement on Tuesday night left lawmakers in the Assembly frustrated, he added, and searching for more details.

“Since the recess, communication between the administration and the Legislature has been poor,” said Assemblyman Phil Ting. “We haven’t really received information in a timely manner.”

Ting, a Democrat who heard about the deal from a Los Angeles Times story about the Maddow announcement, is vice chairman of the Joint Legislative Budget Committee. He said lawmakers have reached out to departments in the administration for details on coronavirus response and expenditures, but often do not hear back for days. Sometimes, he says, they have not heard back at all.

Get the latest coronavirus news straight to your inbox.

Thanks! We'll send you an email each evening.

After the masks deal, the Joint Legislative Budget Committee told the governor’s office that, normally, lawmakers “would have had more time to deliberate an expenditure of this magnitude,” and requested more information about the deal.

A spokesperson for Newsom did not immediately respond to requests for comment.

“This is all moving at the speed of light,” wrote Senate Pro Temp Toni Atkins, a Democrat, wrote in a statement. “Everyone has been doing their best to inform and communicate and we just need to make sure that keeps happening.”

Rendon said he has been in contact with the governor almost every day about coronavirus response and planning, including for the budget.

Newsom described the masks agreement as a “big, bold bet” at a press conference Wednesday, and has said California used its leverage as a nation-state to secure the equipment.

The deal creates a consortium of nonprofits and private companies to purchase or produce about 200 million masks, including N95-style medical masks, a month. The organizations involved in that consortium, however, remain unclear.

California has been trying to procure protective equipment for weeks, including hundreds of millions of masks, shields, gowns and gloves. The deal announced Tuesday would be a major step toward meeting those needs and ensuring people responding to the outbreak have adequate protection on the front lines.

But lawmakers are pressing the administration for more details on how it all came together.

A letter sent Thursday from Democratic state Sen. Holly Mitchell, chairperson of the Joint Legislative Budget Committee, to the administration underscored lawmakers’ search for more details. The committee approved the expenditures, but established a series of requirements to disclose more information about the contracts — including the price per mask, quality standards of the equipment and details about the manufacturers.

The committee also required the administration establish a website by early next week that tracks California’s inventory of protective equipment and where it is sent throughout the state.

On Thursday, the Senate and Assembly announced the Legislature — which is currently adjourned because of the coronavirus — will hold hearings about the administration’s response to the outbreak.

“We strongly believe the Governor and his team are working diligently on the behalf of Californians, but we promised the people of California we would provide this oversight when we passed emergency COVID-19 funding in March,” Rendon and Atkins wrote in a joint statement.

Atkins created a Senate subcommittee on coronavirus response and scheduled its first hearing for next Thursday. The Department of Finance and Legislative Analyst’s Office will participate in the hearing, and some lawmakers are expected to participate remotely.

Not all lawmakers are frustrated. State Sen. Bill Dodd says he has been satisfied with the Newsom’s actions and communications with the Legislature.

“We’ve got to give the executive office of the state of California an opportunity to act on behalf of the Legislature and people of California to do the right thing,” the Democrat said.

The Assembly, which did not approve a rule allowing remote lawmaking, has not announced its first hearing date.

The Legislature granted Newsom broad latitude on coronavirus response before adjourning in March. Lawmakers approved Senate Bill 89, which allocated $500 million to the governor. That amount could be increased to $1 billion in $50 million increments.

It handed the Governor substantial spending power, but came with some strings attached. The administration had to wait 72 hours after the Joint Legislative Budget Committee

In a letter to the Legislature, posted online around the time of "The Rachel Maddow Show" airing, the administration requested the committee waive that rule — twice — in order to approve the deal.

Ting says the committee has reached out to departments in the administration for additional information about expenditures and response, “[but] oftentimes it will be days before we hear back. And then we may never hear back--that’s been a source of frustration.”