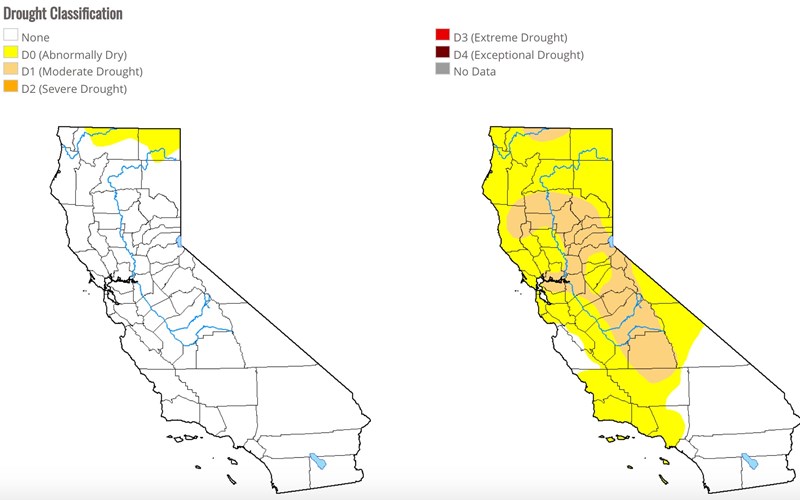 A comparison of the level in drought in Calfornia from January 7 to Feb. 25, 2020.The National Drought Mitigation Center, University of Nebraska-Lincoln

Some communities in California just experienced the driest February ever, and there’s around an 80 percent chance the state will enter a full-blown drought this year.

If that happens, it could be the third-driest year in over a century, according to modeling by the Center for Watershed Sciences at UC Davis.

But even though around a quarter of California is undergoing moderate drought conditions experts say it’s too early to panic — they say a second year of drought is where things get dicey.

“The first year of a drought is really mostly a wake-up call,” said Jay Lund, the center’s director. “It will be prudent, if this turns out to be a dry year, for us to prepare for it to be a longer drought.”

But Lund says to not overlook that California’s climate is variable. Droughts are normal, but with climate change they're intensifying — as the state saw during the previous drought from 2011 to 2017

Possible rain in March and April is unlikely to save California from a dry year, Lund says. But he says to remember there's a weak chance that a “Miracle March” could help.

In 1991, during the fourth year of a drought, there were three times the average rain and snow during March, Lund recalled.

But some climatologists, like UCLA’s Daniel Swain, have said that, despite the forecast of light precipitation over the next few weeks, “models are unfortunately painting a continued drier-than-average picture for spring 2020.”

While occasional brief and light precipitation events are possible across California over the next few weeks, models are unfortunately painting a continued drier-than-average picture for spring 2020 due to the persistence of North Pacific high pressure. #CAwx #CAwater #CAfire pic.twitter.com/ohkzScYJIh

How Bad Is The Current Drought?

February was very dry in California. So far, there has only been about 51 percent of the average amount of seasonal rain in the Sacramento Valley — and less in the San Joaquin and Tulare basins. But there is some hope on the horizon.

There was some light rain and snow in the Sierra Nevada this weekend. But the “next measurable amount of precipitation isn’t expected until later in the week,” according to Bill Rasch, science and operations officer for the National Weather Service in Sacramento.

“Hopefully that will open the storm doors, but it’s just a little too far to tell if it will lead to more rain,” he said.

The Climate Prediction Center has posted its latest extended outlook for Mar 4-12. For the first time in a while, the 8-14 day outlook period shows above normal chances for precipitation! The start of the month does look dry though. Which are you looking forward to more? #CAwx pic.twitter.com/0c0AhZ4MiO

A high-pressure system sitting over the Pacific is blocking storms before penetrating inland California and pushing them north over the Pacific Northwest, missing the state. This storm deflector is similar to what helped cause the 2011-17 drought.

“People are wondering are we ever going to see rain again and I want to point out every winter California experiences a three to six week dry spell,” said Michelle Mead, warning coordination meteorologist with the National Weather Service in Sacramento.

“It does seem ominous, but it is something that we have seen before,” she said.

When it comes to the Sierra Nevada, the snowpack dropped from 92 percent of normal in January to 46 percent for March.

“We didn’t quite get the results we had hoped for and we will most likely end this year below average,” said Sean de Guzman, chief of snow surveys and water forecasting section of the California Department of Water Resources at the Feb 27 snow survey.

But State Climatologist Mike Anderson said there’s a glimmer of hope in that reservoir levels statewide are around 104 percent of average for this time of year.

He also says what’s looking to be a drier-than-average water year is in part attributable to a late start to the rain and snow season, around Thanksgiving; a below-average January; and the record dry February.

That means California is 70 percent abnormally dry, and about a quarter of the state is undergoing drought conditions, according to David Miskus, a NOAA meteorologist who wrote the latest U.S. Drought Monitor.

He says during the past two months “less than 25% of normal precipitation had fallen on much of California and western Nevada, creating deficits [of snow] exceeding a foot in parts of the Sierra Nevada, and 4-8 inches along the coast.”

The scarcity of rain and snow in models could point to a dry spring, and Lund with UC Davis says this means fires could ignite sooner in the season.

“There will be impacts to the forest, maybe some disease outbreaks, wildfires quite likely and more problems for fish and waterfowl because of this,” Lund said.

The weather pattern could result in grass fire season in the foothills starting before the typical fire season, and offshore wind events could increase the possibility of fires in Southern California, CalFire reports on its incident page.

So far this year, 157 acres have burned in 233 incidents with no loss of life or damaged structures.

Will There Be A Miracle March?

Bill Rasch, with NWS in Sacramento, looked at the last 10 driest Februaries in California and found that every March was wetter.

“They weren’t all Miracle Marches, but two of them were pretty wet,” Rasch said. “It’s a pretty good chance that we’re going to be at least wetter in March and a slight chance of a ‘Miracle March.’”

Does a dry February mean we will see a dry March? Taking a look at the top 10 driest February's a wetter March followed all of them with some of the March’s being exceptionally wet. #CAwx pic.twitter.com/npdw04i6pX

Historically, when looking at the month following a dry February, “about half of them go on to be dry and half continue to get a fair bit of moisture in March and April,” said Anderson, the state’s climatologist.

He says a wet March this year would mute the impacts of drought, but not likely offset the state’s water and snowpack deficits — so it would have to be pretty miraculous for California to get out of drought for 2020.

“It seems very unlikely that we could be pulled back up to average conditions,” said Paul Ullrich, an associate professor of regional climate modeling at UC Davis.

He also notes that Miracle Marches only take place about one or two times every century.

“What I worry about in particular is that these Miracle Marches or Miraculous Mays also come with warmer temperatures,” Ullrich said.

That means the state’s snowpack won’t likely grow much larger than the 46 percent. Ullrich said there’s already “enough damage done to the snowpack that we are going to see a snow drought through the remainder of the season.”

This February, there was no recorded measurable precipitation in the Northern Sierra, which “never happened before in its history since 1921,” said de Guzman with DWR.

A comparison of the snowpack across the Sierra-Cascade range over the past 6 years shows the true variability of a California wet season. While numbers are similar to the 2017-2018 winter, snow did extend into somewhat lower elevations back then. #CAwx pic.twitter.com/hVomHMDHtO

But de Guzman notes it’s not unprecedented for California to be in this position. In 2018, after a dry start, March storms made up much of the deficit and brought California closer to normal that year.

“February rain and snow were quite disappointing, and we didn't quite get the results we had hoped for, so we'll most likely end this water year below average. We just don't know how far below,” de Guzman said.

The next snow survey will be conducted on April 1. Experts say it will be significant, because it’s when the snowpack’s water content peaks — snow melts faster after this point in the year because of the sun's higher position in the sky.

Don’t freak out but be wary — that’s the message from experts across California as dry weather continues.

“It’s really when you get out to the third, fourth or fifth year of a drought that there is really little flexibility in surface water to manage,” said Lund with UC Davis. “California does have long droughts, and they happen frequently and may be more severe with climate change.”

That’s why Ullrich, the UC Davis climate modeler, says Californians shouldn’t be too concerned. He says it’s difficult to make long-term predictions about the amount of rain and snow the state will experience.

“We can’t say anything about whether April or after will be wet months, or if we will be able to recover from drought conditions,” Ullrich said.

He and others, like Mead with NWS, emphasize that, despite California’s history, all we know at this point is that 2020 will most likely be a below-average water year.

“I have a yard, too, and right now I’m looking at it going, ‘Boy, it could really use some rain,’” Mead said. “Right now, it's too early to panic … and I wish I had a crystal ball to tell you what’s going to happen, but I don’t.

“I’m in the same boat as everybody else keeping an eye on the forecast because it’s not over until it's over.”