Fires, Floods And More: A View Of California From Space In 2019

The year began amid the ashes of the deadliest wildfire in California history. Then came torrential rains, the superbloom, a marine heat wave, and fires again.

They are events that foreshadow a future pattern of more extreme wildfires and rainstorms as climate change drives the Earth’s temperatures higher. The 2019 events prompted now familiar responses from politicians confronted with catastrophe across the state: disaster relief money, funding for scientific studies, and recriminations against bankrupt utility Pacific Gas and Electric.

Satellites captured the events that marked the changes of California’s seasons — and we rounded up some of the year’s significant events. So take a look back through the year in California, from space. 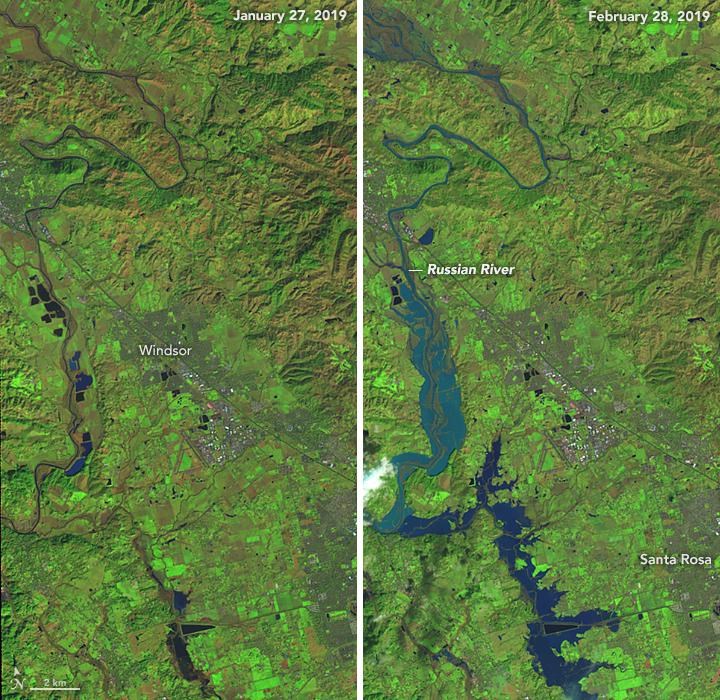 California relies on atmospheric rivers for water but they also are at fault for most of the flood damage in the West. Sonoma County officials calculated $56 million in damage to public infrastructure alone, with The Press Democrat reporting another $91.6 million in damage to homes across the county.

In response, state officials directed $1.5 million in recovery aid to Sonoma County and another $1.5 million to the City of Sebastopol.
The budget also included $9.25 million for research into atmospheric rivers — a phenomenon that experts warn could become less frequent but more extreme as climate change continues. 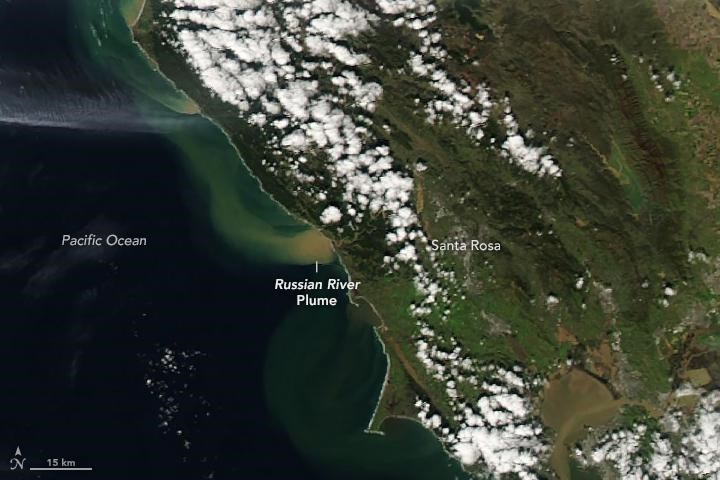 A sediment plume from the Russian River washes out to sea in this Feb. 28, 2019 image snapped by the Moderate Resolution Imaging Spectroradiometer (MODIS) on NASA’s Aqua satellite. Credit: NASA Earth Observatory images by Lauren Dauphin. 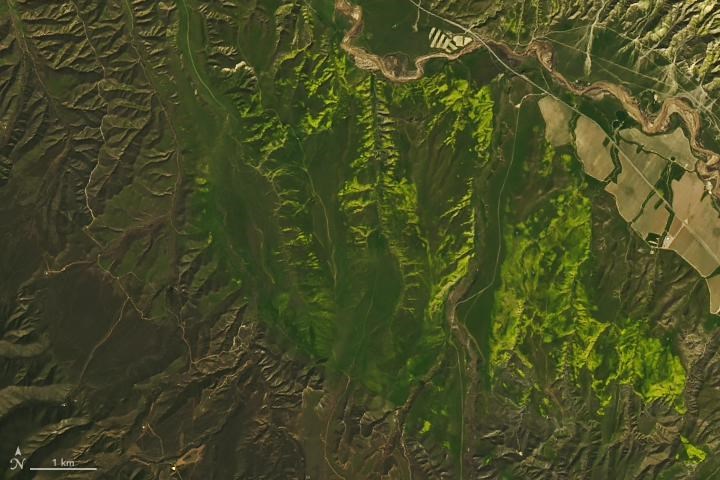 Wildflowers and green hillsides near New Cuyuma, Calif. Photo taken by the Operational Land Imager on the Landsat-8 satellite on March 18, 2019.

California’s torrential rains fueled a profusion of plant growth, captured in the satellite photo (above) of Southern California’s superbloom and in the aerial photo (below) of wildflowers.

Some of the plants that thrived were native, like the orange California poppy. But the rains also helped invasive weeds and grasses take hold on hills that wildfires had scoured just months before.

These invaders worry environmental scientists like Suzanne Goode with the California Department of Parks and Recreation, Julie Cart reported for CalMatters.

The concern is that fast-growing invasive plants can crowd out the native plants that California’s wildlife rely on, and can fuel fires when they dry out in the summer heat.

Goode’s team tries to clear away invasives to make room for the natives they replant — but the team is small, and wildfire can wipe away years of work in an instant. “What I look at is to hold the progress I’ve already made, and then look at what can we reasonably get to,” she told Cart. “It’s a battle.” 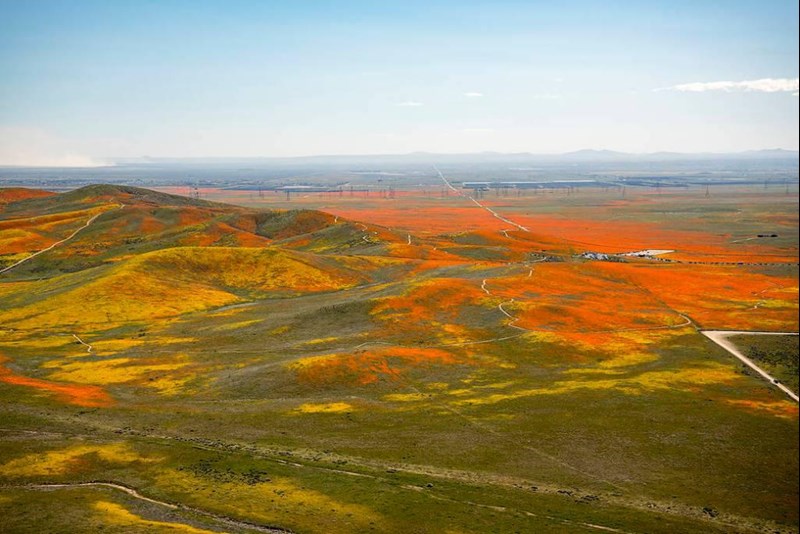 A photo (not from space) of wildflowers and poppies in the Antelope Valley; the Poppy Reserve is in the background. Photo snapped by Jim Ross from a NASA aircraft, TG-14, on April 2, 2019.

The “Blob” returns, then retreats

Scientist Andrew Leising has been tracking the recent heat wave, which peaked at the end of August, using sea surface temperatures measured by a collection of satellites and verified with data collected by ships and buoys. Credit: Andrew Leising, NOAA Fisheries’ Southwest Fisheries Science Center.

This year saw the arrival of a marine heat wave that is cooking the ocean off the West Coast. The heat wave peaked at the end of August, when it warmed waters from the Gulf of Alaska to the bottom of California by some 4℃  above normal.

Since then, the heat wave has cooled slightly and retreated from the shore — shrinking to about the size of Alaska from about five times that big. “If you didn’t know anything about what had already happened this year, and you just looked at now, you’d be like, ‘Wow this is really big,’” said Andrew Leising, a research oceanographer at the National Oceanic and Atmospheric Administration’s Southwest Fisheries Science Center.

At its peak, this year’s heat wave was the second biggest the northern Pacific has seen over the past 40 years. The biggest was the heat wave known as “the Blob” that lingered from 2013 through mid-2016 and wreaked havoc on sea life.

The blob stranded thousands of sea lion pups and kicked off a toxic algal bloom that cost California’s dungeness crab fishery about $48.3 million dollars and its rock crab fishery $376,000, according to a federal disaster assistance relief letter from former California Gov. Jerry Brown. The feds agreed to chip in about $26 million.

It’s difficult to predict whether climate change will bring more stretches of extreme ocean heat as it continues to cook the planet and its oceans as a whole, according to Leising.  But as ocean temperatures climb, scientists are detecting them more than they used to.

Leising is watching the current heat wave closely. “It could go either way, it could completely dissipate, or we could get hammered — it’s really early to tell,” he said. 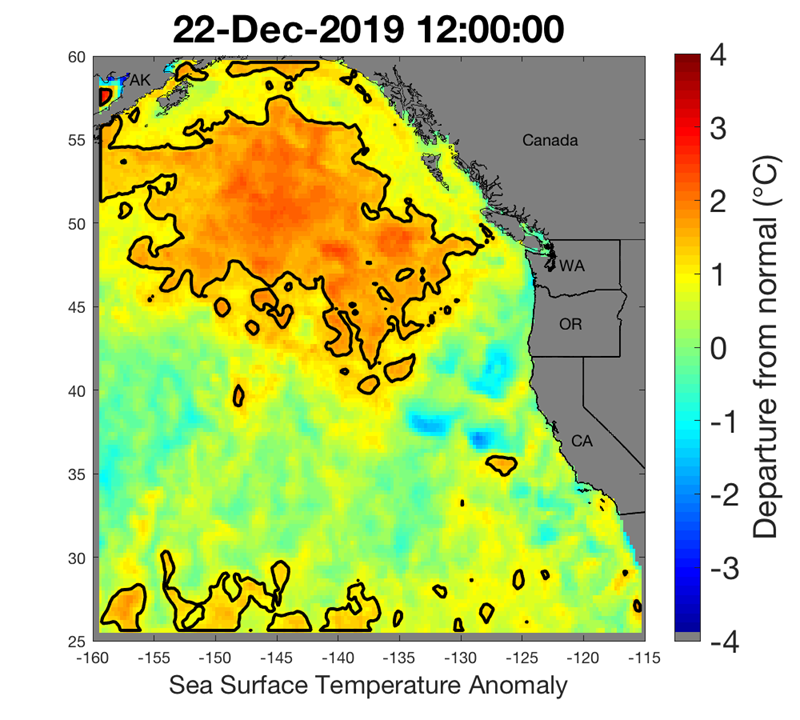 A recent look at the Blob-like marine heat wave shows that it’s dissipating — but Leising says it’s too early to say whether it will disappear for good. Credit: Andrew Leising, NOAA Fisheries’ Southwest Fisheries Science Center

Fires burned more than 253,000 acres of California in 2019. That includes the Kincade fire (above), which destroyed 374 buildings and injured four people as it spread across nearly 78,000 acres of Sonoma County.

This year’s fires, which killed three people, were less destructive than the fires of 2018 that burned nearly 2 million acres and killed 100 people in what CalFire calls “the deadliest and most destructive wildfire season on record in California.”

Embattled and bankrupt utility  Pacific Gas & Electric accepted responsibility for the deadliest of those fires, the 2018 Camp Fire. And as part of its plan to prevent their equipment from igniting fires, it cut power to millions of Californians this fall during peak fire weather.

Californians and their lawmakers were furious over the company’s execution of the power shutoffs, which included communications failures that kept people in the dark about where the lights were likely to go out.

In a statement, PG&E CEO Bill Johnson said the company would give bill credits to the customers affected by the Oct. 9 power shutoff. “We are constantly working to execute these safety shutoffs more effectively while prioritizing public safety. It’s important to remember that the sole purpose of these power shutoffs is to reduce the risk of catastrophic wildfire in the communities that we serve,” Johnson said in a statement at the time.

Still, lawmakers weren’t appeased. CalMatters reported that Sen. Bill Dodd, a Napa Democrat, said at a hearing in November: “I looked at what happened on Oct. 9 as a big ‘screw you’ to your customers, to the Legislature, to the governor.”

California is weighing how to weather future fire seasons — including by studying microgrids, CalMatters’ reported this fall. As climate change primes the West to burn, wildfires will certainly be in the cards for 2020.